Gold, the safe-haven in times of economic and political trouble, should continue benefiting from the broad trade and markets distress over China—although the dollar’s likely resurgence after last week’s disappointing Federal Reserve could result in headwinds for the precious metal.

On the oil front, Iranian Revolutionary Guards seized an Iraqi tanker in the Gulf, which they said was smuggling fuel, and detained seven crewmen, Iran’s state media reported on Sunday.

London-traded , the global benchmark for oil, rose in Monday’s early trade in Asia, responding to Iran’s latest show of power and heightened tensions with the West. But New York-traded fell on worries about China, which remains one of the more important buyers of U.S. crude.

Dismal quarterly earnings for some U.S. shale drillers of oil were also weighing on WTI prices apparently. Concho Resources (NYSE:), for instance, lost 22% on its shares on Thursday alone as a 25% profit slump despite production increases. The company said it will slash spending and slow drilling in the second half—a move that could lead to more supportive crude prices later but not right away.

Back to the trade war: Trump’s tweet announcing a 10% tariff on $300 billion worth of hitherto untaxed Chinese imports had the destructive market impact of an intercontinental ballistic missile when it landed on Thursday. No one possibly, except the president, of course, knew the 140-character projectile was coming. Faced with an abrupt end to a month-long truce, as well as with China’s promises to fight back, investors had no other plausible reaction than to crash and burn their way through stocks and oil. 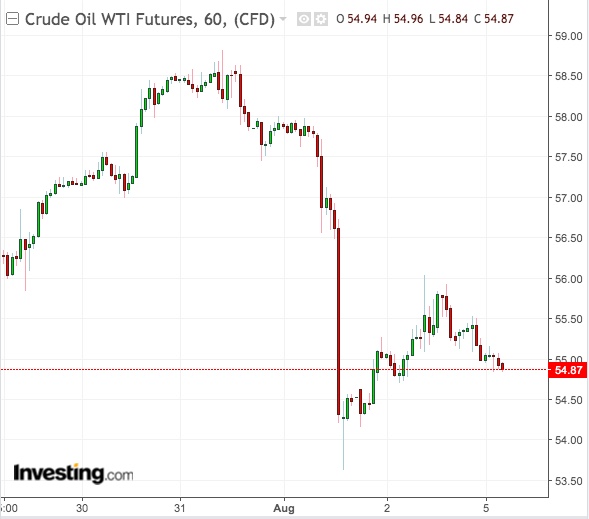 But in the strangest of rebounds, the market leapt in the very next session, to recover at least a third of the previous day’s carnage. Therefore, WTI’s net loss for last week amounted to just under 1%, while Brent shed 2.5%. While the partial recovery left none the wiser, it reinforced what many suspected: volatility would only get worse this summer.

Meanwhile, U.S. crude oil exports surged by 260,000 barrels per day in June to a monthly record of 3.16 million bpd, suggesting plenty of supply in the market. While South Korea bought record volumes in that period, China also resumed purchases it had suspended earlier. Now, as the trade war rears its ugly head again, concerns are growing on what it could do to oil demand.

“Oil demand has disappointed … in 2019 due to weaker economic activities, unfavourable weather and trade tensions.”

Investors will be closely watching Chinese data on inflation and trade this week for an update on the health of the world’s number two economy. Trade data due out on Thursday is likely to reinforce a trend of declining exports and imports, with exports expected to fall 2.2% year-on-year in July and imports expected to show a drop of 7.6%.

As for central banks, those in , , , , and all face crucial monetary decisions, with investors waiting to see which would follow the Fed’s moderate rate cut from last week.

New Zealand is expected to trim another 25 basis points off its 1.50% main rate and there are outside bets that Australia could even make three cuts in a row, having already dropped borrowing costs down to 1%. India is expected to make its fourth cut of the year too as growth continues to slow there and, while Thailand is not expected to move, the strength of the is clearly causing worries again. With Norway, the issue is whether or not the country’s central bank sets up a September rate hike, an idea it has been flirting for months.

On the Fed front, St. Louis Fed President is to speak at an economic and monetary policy event in Washington on Tuesday, while Chicago Fed President will speak on Wednesday. Both speeches will be closely scrutinized for clues on further easing, after Fed Chairman practically shut the door on such hopes for the remainder of the year, describing last week’s 25-bp cut as a one-off “mid-cycle adjustment”. 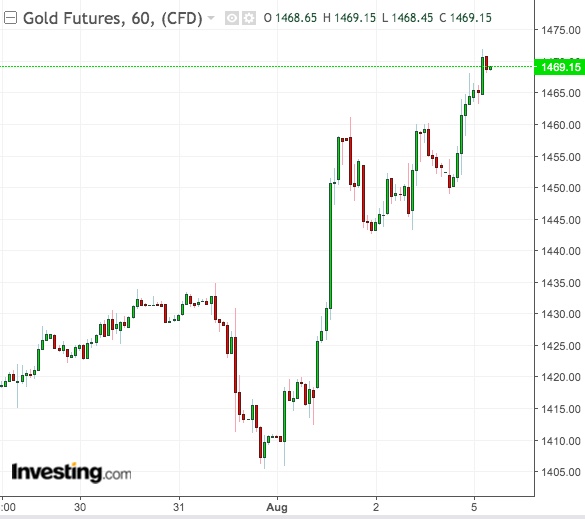 After slumping in Thursday’s official session in New York, gold posted a dramatic rebound in post-settlement trade that continued into Friday as Trump’s plan to hit China with additional tariffs triggered a strong safe-haven bid for the yellow metal.