Commodities Week Ahead: The Gift Of Thanksgiving May Be Choppy Oil, Tight Gold

There are two things oil traders need to keep their eyes on this week: the turkey and volatility.

Trading volumes are typically lighter this time of the year due to the travel and holiday around Thanksgiving, giving rise to market swings.

And few things are prone to swings now as much as oil prices, as market participants attempt to strike a balance between the hogwash of the U.S.-China talks and OPEC’s production-cuts-shale-bashing fanfare.

The weekly appearances on Fox by U.S. President Donald Trump, White House economic adviser Larry Kudlow and Commerce Secretary Wilbur Boss have begun to take on the air of late-night comedic talk shows as they try to impress on us, each time, that a deal is happening—only that it’s not.

The latest remark from Trump on Friday was that a deal was “very close,” even as he continued to wag the additional-tariffs-by-Dec.-15 stick at China. Trump stressed that Beijing was desperate for a deal.

He also bragged that he had practically “saved” Hong Kong from annihilation by holding trade talks as an ace against Beijing, so that it won’t assault Hong Kong protestors opposing its rule—not the most diplomatic thing to say about someone you want a deal from.

As though markets weren’t utterly confused by the message they were supposed to take away from all this, the president added that he might veto legislation passed by the U.S. Congress in support of the Hong Kong protestors.

He suggested he would do this as a carrot to persuade his counterpart Xi Jinping to sign. Xi, on his part, respectfully pointed out that China will not be dictated by colonial powers and will fight back if necessary.

As Yale senior fellow Stephen Roach—quoted by my colleague Pinchas Cohen in his weekly column—said in a clearer narrative, the phase one of the U.S.-China deal is a “hollow,” “flawed”, “ridiculous” political “band-aid” to provide a temporary patch to Trump’s self-inflicted wound—and in short, to help his reelection bid for 2020.

While the Thanksgiving week’s thinner volumes could mean more choppiness for oil from trade war shenanigans, crude traders and their algorithmic models also seem to have tamped down since last week, when they chase crude prices up purely on the administration’s hyperbole on trade.

Oil funds and their algos have switched instead to chasing news around OPEC, which, in the run-up to its December meeting, was creating its own drama to inflate the market.

After oil prices took a severe beating in the first two days of last week on demand concerns, OPEC leaked to Reuters—through an unanimous source—an announcement probably saved for its December meeting: that the current production agreement the cartel had with its allies to cut 1.2 million barrels per day will be extended until June.

To OPEC’s Rescue: A Russia With A Record Of Broken Promises

Russian President Vladimir Putin essentially backed up the OPEC news leak later, saying that as the cartel’s biggest ally, Moscow, will provide unstinting support to the output cuts—although Russia’s record of cooperation with OPEC has been littered with broken promises. 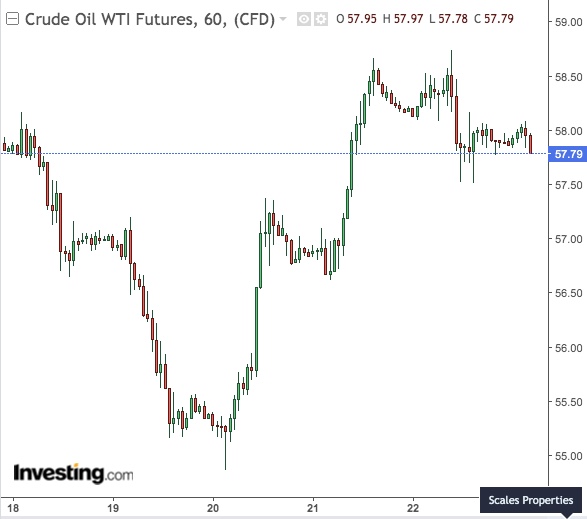 NYMEX-traded and ICE Futures-traded took all of this in to settle the week little changed—after huge swings of a combined 5% slide in the first two days and a rebound, later, to 2-month highs.

With about 10 days to the start of their Dec. 5-6 meeting, OPEC and its members are expected to continue with their jawboning of the market. And the cartel seems to have found a perfect target for its rhetoric: U.S. shale oil.

OPEC Secretary General Mohamed Barkindo was on target with his salvo against shale recently, saying that after talking to “a number of producers, especially in the shale basin, there is a growing concern by themselves that the slowdown is almost graduating into a fast deceleration.”

Barkindo added that these companies “are telling us that we are probably more optimistic than they are, considering the variety of headwind challenges they are facing.”

The U.S. fell for a fifth consecutive week last week amid continuous capital expenditure cutbacks announced by drillers in quarterly forecasts that could provide more fodder for OPEC.

The truth, of course, is that OPEC has issues of its own that makes it a challenge for the cartel’s de-facto leader Saudi Arabia to stick to the 1.2 million barrels per day of cuts agreed nearly a year ago.

Persistent overproduction by serial offenders such as Nigeria and Iraq—and, of course, top ally Russia—have weighed on the Saudis, who have had to carry most of that 1.2 million bpd burden.

With the mega stock sale of Saudi state oil company Aramco just around the corner, the kingdom needs to enforce the existing production pact and somehow keep prices up, without getting into deeper cuts. But since airing internal problems might not be a good idea for OPEC at this time, we can expect it to focus on shale-bashing instead.

Gold prices might stay trapped in the $1,460 to $1,475 per ounce range this week as traders try to make sense of where U.S.-China negotiations are going. 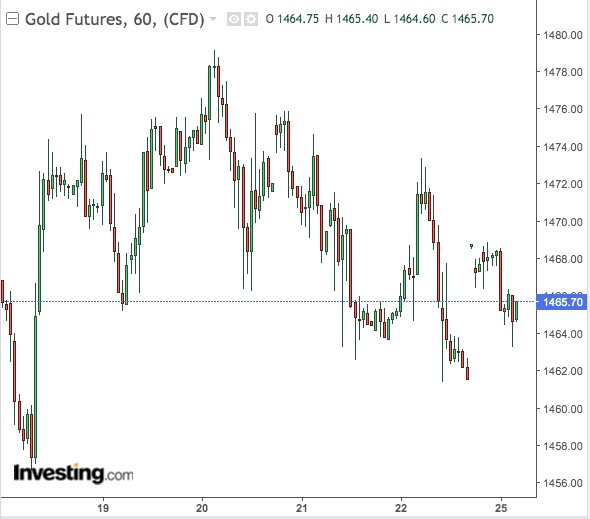 There is abundant data that might influence gold’s moves this week: U.S. , , and ; German , Eurozone and China .