Commodities Week Ahead: Surplus Worries Might Be Back In Oil; Gold Range-Bound

Two weeks ago, this column cautioned that if you were rushing to add to oil’s geopolitical premium in the aftermath of the Saudi attack, it was good to remember there were huge risks on both sides of the oil rally.

While in hindsight that prediction proved accurate, what surprises us is the collapse of almost every bullish driver in the market within just 10 days. 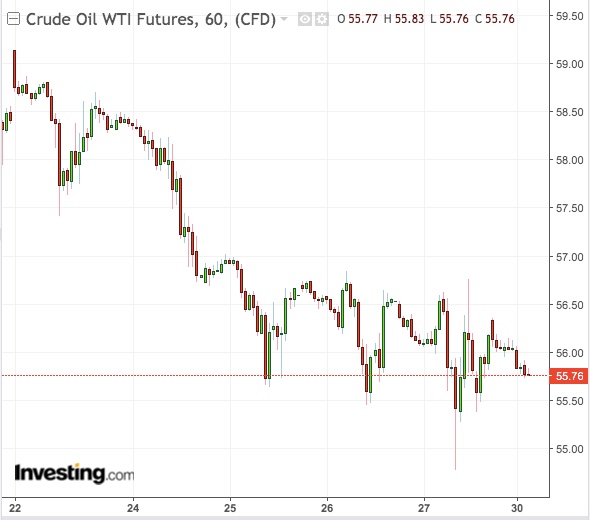 On the week, both the benchmarks lost nearly 4%, marking WTI’s biggest loss since the week ended July 14 and Brent’s deepest slide since the week to Aug. 4. Even more startling, U.S. crude settled just about a $1 higher than where it stood before the Sept. 14 attack, while the U.K. grade’s premium ran right under $2.

Biggest Oil Supply Crisis That Turned Out To Be Not

What was potentially the biggest oil supply crisis in nearly 50 years—disrupting 5% of the world’s daily crude output— was barely felt as a crisis by the trade.

As yet another week begins, whatever risk premium that had lingered in the market could peel away, as initial scares from the attack continue to fade.

Most of the fears revolved around Saudi Aramco and how long and how much of a production loss it would suffer from the hits on its gigantic Abqaiq crude processing facility, which was turning out 5.7 million barrels per day.

But the Saudi state oil company now says not a single barrel of its delivery to customers will be affected by the attack. It says it has patched all blown pipes at Abqaiq in under two weeks, and the facility is back up and fully running.

In an effort to get the market’s focus back on its efforts to launch the world’s largest share sale, Aramco also adds that Saudi oil production capacity as a whole is now higher than before the Sept. 14 attack.

War Risk Tamped Down Too, Making Oil A Sell More Than Buy

The other major worry was whether the United States would assist Saudi Arabia in launching a military offensive against Iran, which both blamed for the attack.

Yemen-based Houthi rebels had claimed responsibility for the Sept. 14 raids but some key Western powers—including France, Britain and Germany—have pinned it on Iran, which has denied the charge.

Saudi Arabia’s crown prince warned in an interview broadcast on Sunday that oil prices could spike to “unimaginably high numbers” if the world does not come together to deter Iran. But he added that he would prefer a political solution to a military one.

Houthi rebels said on Saturday they had carried out a major attack near the Yemen border with the southern Saudi region of Najran, and captured many troops and vehicles. But there was no immediate confirmation from Saudi Arabian authorities.

Yet on Friday, reports emerged that Saudi Arabia would agree to a ceasefire in Yemen, where it has been fighting the Houthis for the last four years.

Peace in Yemen, the focal point of Middle East tensions that have drawn even more attention in recent years than the Palestinian-Israel conflict, could result in much reduced war risk premiums for oil, pushing crude prices even lower.

U.S. President Donald Trump has also repeatedly said he has no intention to go to war with Iran and only announced tighter sanctions against the Islamic Republic after the attack. Trump’s political troubles at home, with the start of a formal impeachment inquiry by rival Democrats in Congress, could deeply occupy him in the coming months, giving him little time to think of Iran.

With the supply and security of oil well under control, there could be worries again about a crude surplus—putting traders back where they were just a few weeks ago.

Says Dominick Chirichella, director of risk and trading at the Energy Management Institute in New York:

“Heading into a new trading week, the market is refocused on the global oil surplus with expectations that risk in the Middle East will continue to ease in the short term.”

Also on this week’s radar is a potential strike by workers at the Phillips 66 Bayway refinery in New Jersey. The refinery’s cut-off date for a new contract is Tuesday and the outcome could press crude prices, especially in the absence of a deal.

Gasoline prices rose on Friday in anticipation of a squeeze in fuel supplies, while crude prices added to their decline on fears that the refinery would shut. Historically though, during refinery strikes in the U.S., plants are usually kept running by management and non-unionized workers.

It’s Back To Trade War For Both Oil And Gold

And last but not least is the U.S.-China trade war, which has entered a new dimension after media reports on Friday that the Trump administration was considering ways to limit investor portfolio flows into China.

The U.S. government was also considering de-listing Chinese companies from local exchanges and examining limits on Chinese companies included in stock indices that are managed by American firms, according to the reports.

The timing of the reported U.S. action was suspect as it came just as officials from the two countries were set to return to trade negotiations on Oct. 10. The White House did not immediately react to the reports.

On the gold front, the safe-haven could return to its $1,500 per ounce support this week if the U.S.-China showdown worsens. In Monday’s early trade, both on the New York Mercantile Exchange’s Comex and , which is reflective of trades in bullion, were just under that level.

There is a deja-vu feeling in the yellow metal, with longs in the market almost resigned to the notion that it will be trapped in the $1,500 to $1,550 range for a while as it trades on neutral factors.

China is not the only one that ...