Gold bulls, don’t pop the champagne just yet. The record-smashing rally may not slow until the price hits the $2,000 per ounce mark. 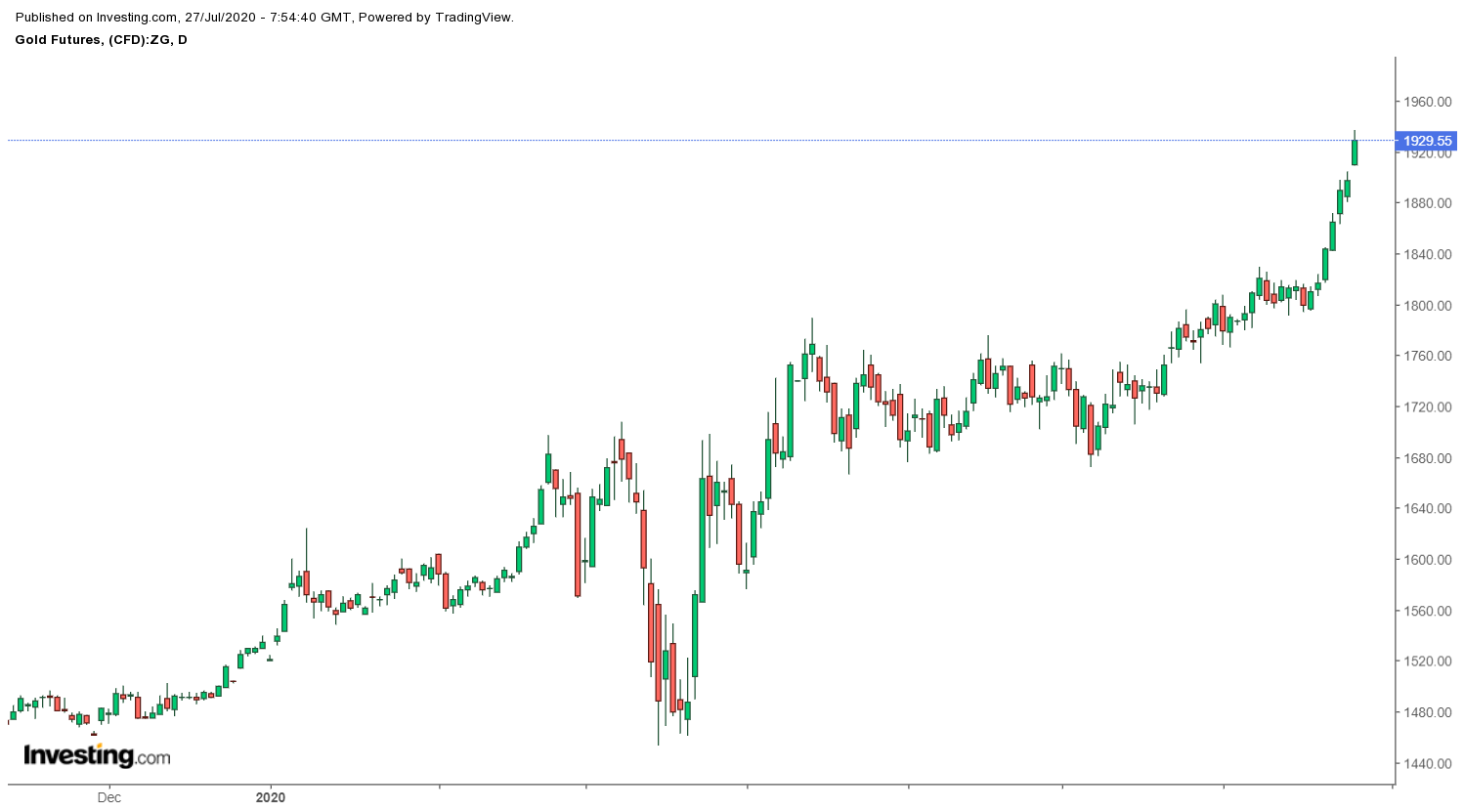 With the $2,000 target appearing more achievable by the day, some analysts warn that gold appeared hugely overbought. Yet, in the same breath, many say it could go even higher.

“Overbought markets can be complicated things: While the backdrop is less assuring for continuation, there’s usually a reason for why the market became overbought in the first place. And, those reasons can certainly continue … and continue and continue, just as we’ve seen in gold.” said James Stanley, a gold strategist who blogs at Daily FX.

“For gold, $2,000.00 an ounce is the next target, and I wouldn’t be surprised to see it achieved relatively quickly.”

No “Fierce Short-Covering” Seen Yet

Sunil Kumar Dixit, an independent precious metals analyst and chartist, said gold may capitulate to the bears above the psychological  $2,000 mark, which may only happen after the $1,955 level is decisively conquered.

A fierce short covering “is yet to be witnessed,” Dixit wrote, adding:

But Dixit adds that if gold remains undeterred on the way up, “mathematical calculations suggest $2,127 as (the) next destination for the upcoming bull rally.”

Gold’s rally has been fuelled by low interest rates and trillions of dollars in stimulus from governments and banks central to combat the economic impact of the COVID-19 pandemic. This has debased the dollar and heightened inflation fears—a situation which investors often prepare for by buying gold.

This year alone, the US Congress has passed three coronavirus stimulus packages worth $3.3 trillion and is debating a fourth one anticipated to cost another $1 trillion plus. Separately, the Federal Reserve has devised loans and other market and economic support programs worth hundreds of billions of dollars to offset the economic damage from coronavirus.  EU leaders, meanwhile, agreed earlier this week on a historic 750 billion euro ($857 billion) stimulus package to rescue their economies.

This week, the gold rally could get another boost from the Federal Reserve. At its monetary policy on Wednesday, the US central bank could reaffirm its intention to keep rates near zero and provide maximum stimulus for the economy, which could weaken the and support gold.

“Despite the overbought readings on long-term gold charts, there could be scope for continuation and a fresh all-time-high in the not-too-distant future,” said AG Thorson, a contributor with FX Empire.

Gold’s strength has also been underpinned by a slump in the dollar this year. The , which measures the performance of the greenback against six major currencies, has slid steadily from 17-year highs of 103.96 in March to below 94 now, its lowest in almost two years.

“The dollar’s slump is not ending anytime soon as negative real rates in the US make it a lot more attractive to ride the European rally or (the) growth-recovery trade that will boost commodity currencies across the board,” said Ed Moya, another analyst at OANDA.

Gold hasn’t been the only beneficiary of the weak dollar and this year’s stimulus programs.

, the second most-actively traded precious metal on COMEX, hit seven-year highs. The price has risen by 34% this year, versus gold, which has only gained some 26%.

“I think silver has potential to gain much, much more if gold gets to (the) $2,000 target,” said Eli Tesfaye of RJO Futures. “If you consider that silver was trading at nearly $44 in September 2011 when gold hit that record high, you can see how terribly undervalued it is now.” 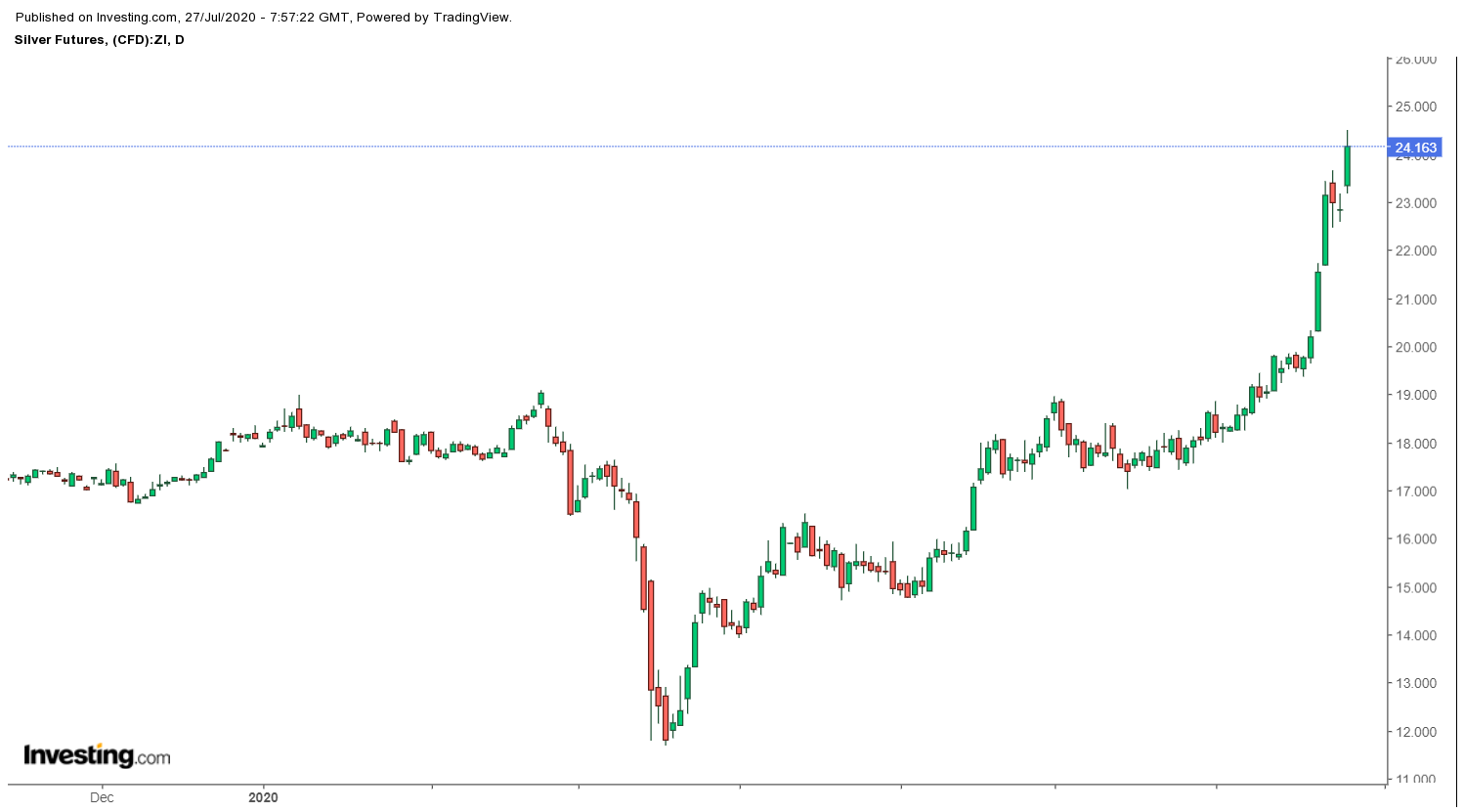 Oil The Laggard Among Commodities For Now 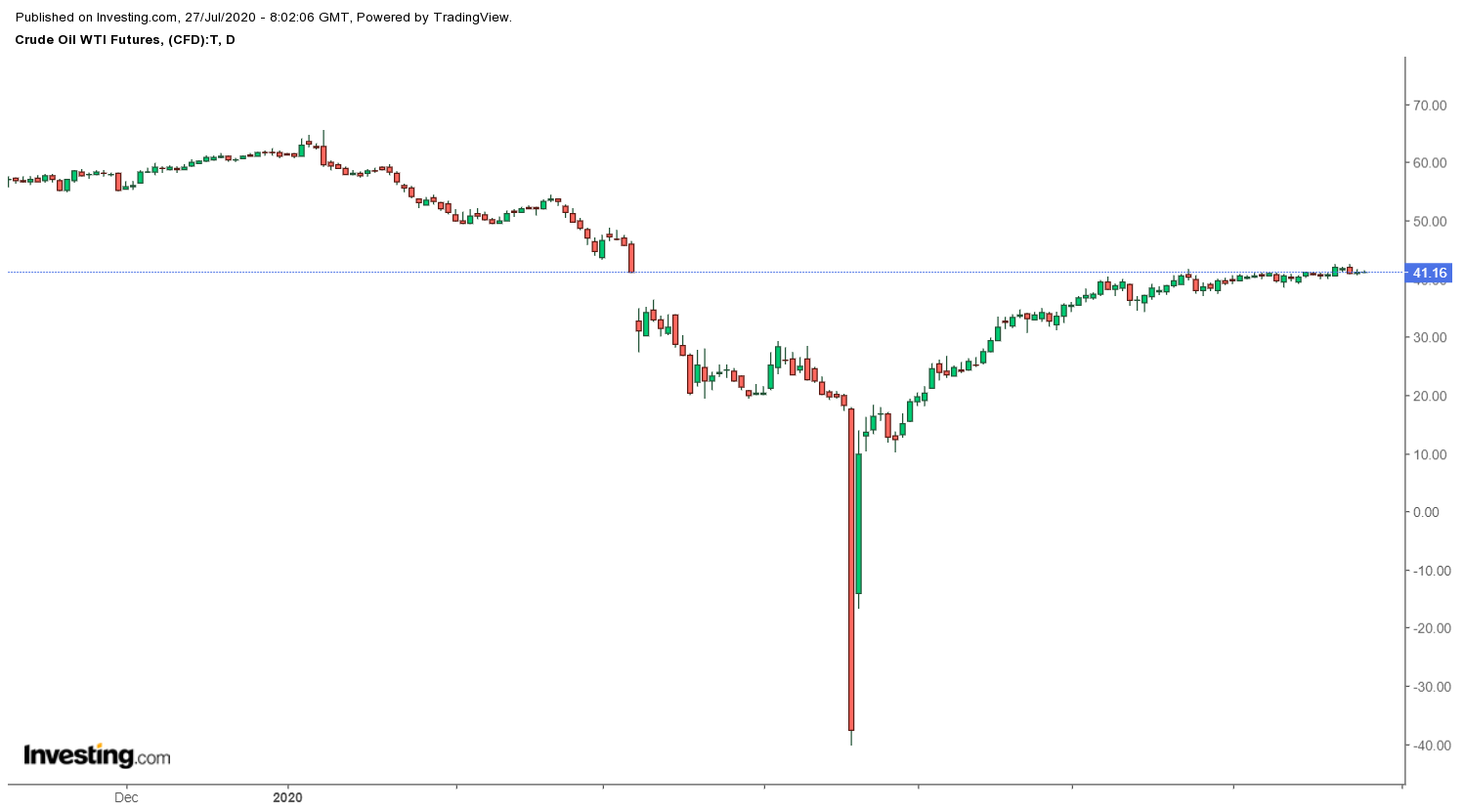 “Following a year of unprecedented shocks, uncertainties over oil fundamentals has never been higher,” Goldman Sachs said in a note.

Goldman, one of Wall Street’s most influential voices in commodities trading, said its “bottom-up” oil forecasting model from the demand collapse of April and May shows global oil demand improvements were sharply slowing, down 60% in July, relative to the pace of gains over May-June.

Disclaimer: Barani Krishnan does not own, or hold positions in, the securities he writes about.