Just what impact has inflation and the labor crunch had on the US economy since the end of the second quarter? We’ll have the answer on Thursday when the Commerce Department reports its first reading for gross domestic product in the third quarter. Economists are forecasting that GDP growth slowed to from 6.7% in the previous three months.

COVID’s Delta variant, along with rising prices, supply chain strains and labor shortages, were expected to have pulled growth down heavily in the Q3 stretch, although some of these effects could dissipate in the fourth quarter. But regardless of how bad the growth or inflation numbers may be, prices aren’t expected to give up their charge as the rally in energy continues to be devoid of any real link with an economy barely out of the pandemic’s clutches. 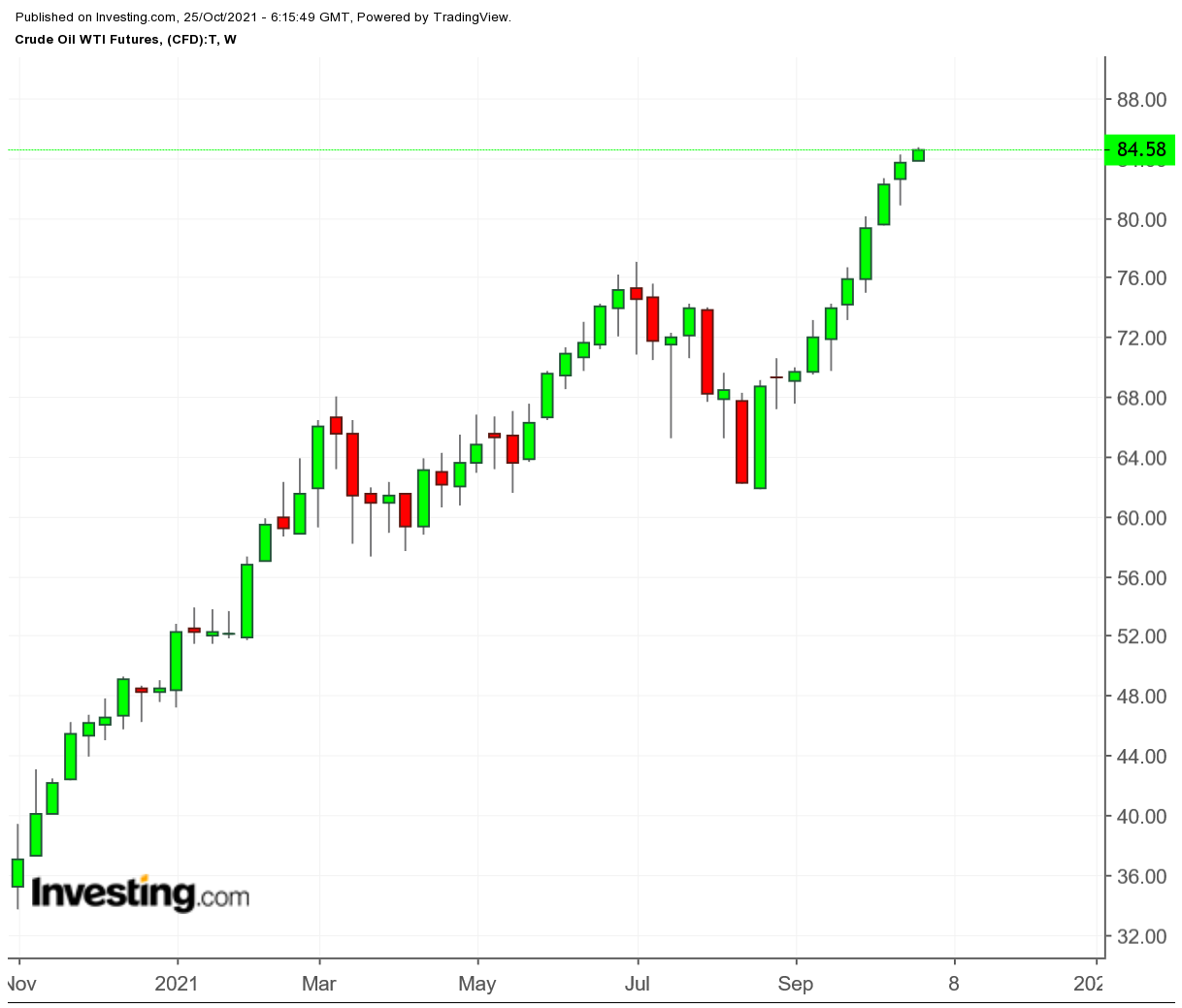 The Lancet medical journal said at the weekend that climate change was creating ideal conditions for infectious disease transmission and healthcare systems weren’t ready for the shock that might cause. This came amid a resurgence in COVID infections from the UK to Russia and Singapore.

Crude Rally: A Hybrid Of Artificial And Real Shortages

But none of these seem to matter to oil bulls who chase one high after another for crude prices as OPEC’s rationed supplies and the sheer inability of some producing countries to pump more create a hybrid of both artificial and real shortages in the marketplace.

In Monday’s Asian trade, crude markets picked up from where they left off on Friday, adding a further 1% from their pre-weekend gain of almost 2%.

“With firm fuel demand in the United States amid tight supply, (the) oil market’s tone stayed fairly strong, which prompted some speculators to unwind short positions,” Reuters quoted Emori Fund Management CEO Tetsu Emori as saying in response to the psychological factors at work in the market.

Aside from upside pressure related to global inventories, oil prices rose on Friday in response to plummeting at the Cushing, Oklahoma storage hub for crude.

“The issue is that there is not going to be any opportunity to restock Cushing in the next 3-5 months as runs should stay high,” said Scott Shelton, energy futures broker at ICAP in Durham, North Carolina. “But it will be a volatile trade.”

In its weekly inventory update on Wednesday, the U.S. Energy Information Administration put the Cushing stocks at 31.2 million barrels, down from the previous week’s three-year low of 33.6 million.

On top of that, the EIA reported that declined by 431,000 barrels in the week ending Oct. 15, compared with analysts’ expectations for a build of 1.857 million barrels.

It was the first time in a month that the EIA had reported a weekly growth in crude stocks after the previous weeks of builds back-to-back that added about 13 million barrels to inventories.

Raft Of US Data On Tap

Q3 GDP aside, other economic data to watch during the week includes reports on on Wednesday, initial jobless claims on Thursday, and and on Friday. Friday’s data includes the , rumored to be the Federal Reserve’s favorite inflation measure.

Economic data will be closely watched as it is coming just before the Federal Reserve’s November meeting the following week, where the central bank is expected to announce plans to begin cutting back on asset purchases, an important first step towards eventual rate hikes.

The ECB is to hold its next policy on Thursday amid tensions between officials over how long an inflation surge in the euro area is likely to last and whether the bank should tweak monetary policy as a result.

At its last meeting in September, policymakers deferred a decision on bond purchases to December, but since then euro area has surged to a 13-year high amid supply bottlenecks and soaring energy prices.

The Fed is likely to start tapering in November and the Bank of England has indicated that interest rate hikes are coming soon so the question is, will the ECB follow?

While the Fed has no near-term foreseeable timeline for a rate hike, continued second-guessing of the central bank on this has been weighing on gold or setting prices of the yellow metal on a series of rollercoaster rides. 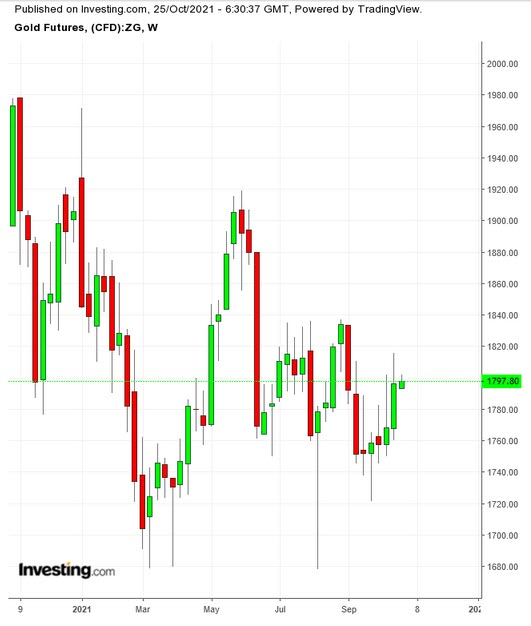 Gold longs saw a second straight week of gains last week but not before a rollercoaster ride on Friday that took them to the euphoria of $1,800 levels, then a plunge and finally a positive close.

The swings in gold were triggered by Fed Chair Powell, who during a virtual appearance at a Bank of International Settlements event, confirmed the central bank’s plans to start tapering its monthly stimulus of $120 billion between November and December, while holding out on giving a timeline for rate hikes.