If OPEC has its way, the May rally in oil could morph into a June one.

But before that, U.S. protesters could be having their way.

A week of mass demonstrations across the United States after the killing of George Floyd, a black man in police custody in Minneapolis, has confounded mayors and governors trying to fully reopen U.S. states and cities shut down over the past three months by the coronavirus pandemic.

“The outbreak of violence Stateside adds another layer of uncertainty to global investors who are already contending with the risk of heightening U.S.-China tensions,” wrote Han Tan, an analyst at forextime.com.

“These downside risks are preventing riskier assets from going off on a rally, as investors curtail their optimism that the worst of the global pandemic is now behind us.” 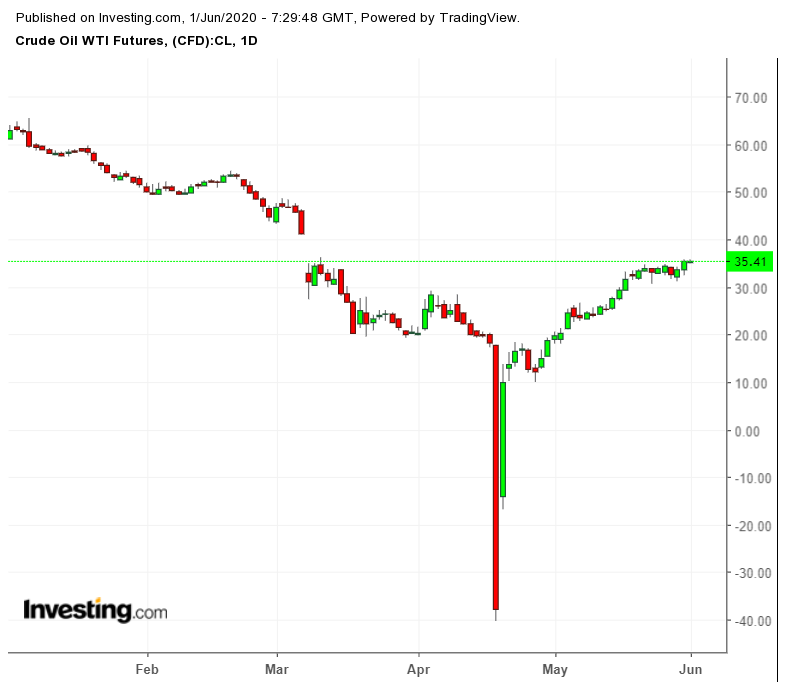 The Organization of the Petroleum Exporting Countries, helped by Russia, is aiming to ride the momentum of last month’s rally to get both the crude benchmarks to above $40. Their plan is to bring forward a meeting of OPEC+—the extended arm of the oil exporting bloc that includes Russia as an ally—to this Friday from its original .

The last time , it was a disaster. Then the Saudis, who control the cartel, wanted deeper output cuts. The Russians didn’t. The resultant price war—with a gush of caught in-between—played into the perfect storm of the demand destruction from the COVID-19 that, ultimately, brought something else the market hadn’t seen in history: prices for WTI. But with all that declared now as water under the bridge, the Saudis, Russians—and quite, unbelievably, the Americans—are working together to try and deliver the best comeback for crude.

A Reuters survey on Friday indicated that OPEC and its allies have made good on slashing almost 6 million barrels daily by May — nearly three-quarters of the 9.7 million barrels per day intended through the end of the year.

But will things continue sailing as OPEC+ and the Americans — who still aren’t a part of the cartel in any way — think? Julian Lee, Bloomberg’s oil columnist, fears not.

“For now, the results of the collaboration are almost too good to be true,” Lee wrote, referring to the oil curtailment initiative.

“In the first month of execution, the level of compliance achieved by most of the 20 countries that signed up to the deal has been astonishingly good. That may be a sign of their desperation as crude prices plunged below zero, or a reflection of the struggle to sell cargoes in a world where demand has collapsed.”

Going forward, he sees red flags as some in OPEC+, most noticeably Russia, were eager to stick to the letter of their deal from April, where they are to begin reopening their oil taps from July.

“A challenge for OPEC+ is that it has every right to do so,” Lee said, referring to the reopen. “Their hard-fought deal has built-in sunset clauses that allow participants to start easing their restraint in July.”

But if that happens, it could also trigger the rapid return of anywhere between 2 million and nearly 4 million barrels per day of supply, he warns.

“It’s really too soon for producers to relax. The demand recovery has yet to take hold in the U.S. or Europe, or in much of Asia beyond China. Fuel consumption in India is currently about 40% below last year’s levels, while in the U.S., a surprise second dip in demand in last week’s data means it remains about 25% lower than at the same point last year.”

As I argued in my weekly review of , much of the May rally in crude was driven by cuts in oil rigs and well shut-ins by U.S. drillers responding to the collapse in fuel demand from COVID-19, which drove WTI to minus $37 per barrel at one point.

Not Time To Turn Taps On Yet

The latest data, however, shows that U.S. producers, enticed by higher prices, have started slowing down on the output cuts that catalyzed the price rebound of the past month. That could be a problem for the nascent recovery the market has seen thus far, particularly if demand doesn’t catch up as quickly as thought.

The latest weekly survey of oil drilling patches by industry firm Baker Hughes showed a reduction of only 15 , versus drops more than 60 per week several times during the past 2-½ months.

To be sure, the U.S. oil rig count is down 68% since the week ended March 13, sending crude production down to an estimated 11.4 million barrels per day from record highs of 13.1 million bpd just three months ago. But the pace of decline has slowed in recent weeks, indicating that drillers were holding back on cuts as the surge in crude prices lure them to put out more barrels in return for more cash.

Also, tracked by the Energy Information Administration showed a rise of nearly 8 million barrels for the week ended May 22, the biggest rise since the end of April.

Distillates, which include products such as diesel and jet fuel, have been the weakest component of the U.S. oil complex since the COVID-19 outbreak. Even with reopenings from the lockdown, demand for diesel and jet fuel has been anemic due to few people having returned to taking public transportation or flights due to lingering fears about infection.

Offsetting the slowdown in production cuts is the notion that many U.S. oil drillers are still distressed by. The demand destruction caused by the pandemic continues to weigh and without more demand for crude, many drillers could go bankrupt.

But even if these drillers go belly up, it doesn’t necessarily mean they will stop producing oil. This is because of the unique nature of U.S. bankruptcy laws, which allow companies protection from debtors while they continue operating and restructuring.

One example is Tulsa, Oklahoma-based Unit Corporation (NYSE:), which became the third U.S. oil driller since the outbreak of the COVID-19 to file for bankruptcy last week after being saddled with debt of more than $650 million.

Unit Corporation said it expected to continue operating regularly through the Chapter 11 bankruptcy process without material disruption to its vendors, customers, or partners. It also said it expected to emerge from the process “with a $180 million exit financing facility.”

This means we could have steadying U.S. production even with more oil bankruptcies. An odd world indeed.

In gold’s case, futures of the yellow metal appeared to be attempting a test beyond April’s near 8-year high of $1,788—a technical bar it must clear to get to the much-vaunted $1,800 level. 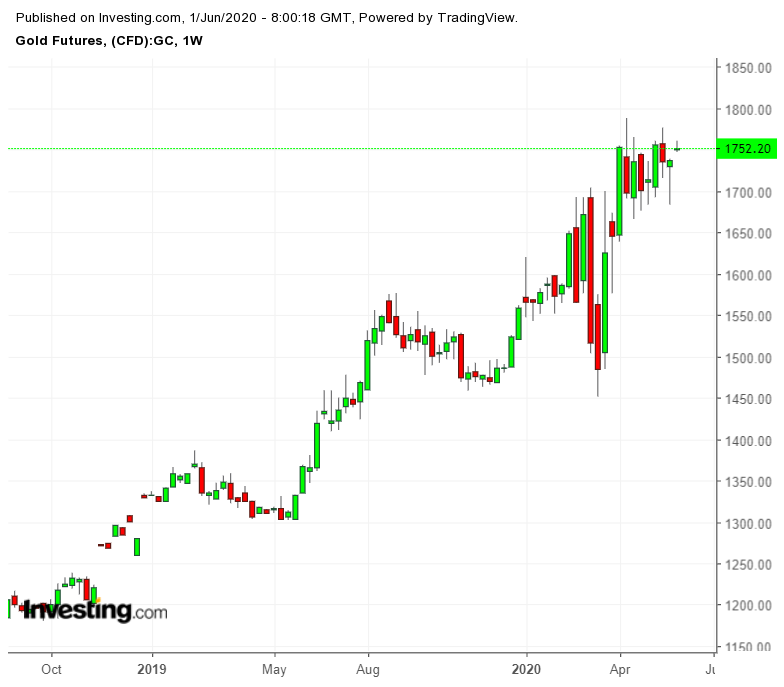 on COMEX settled on Friday at just under $1,737 an ounce for the first time since November 2020, rising for a third straight month, as renewed U.S. tensions with China sent risk-averse buyers steadily toward the safe-haven. In Monday’s Asian trade, it got to as high as 1,760.90.

Also boosting gold since Friday were remarks by Federal Reserve Chair Jay Powell that full U.S. economic recovery from the COVID-19 could not be attained until people felt confidence to resume life like before the pandemic.

“Gold has everything going for it except strong physical demand,” said Ed Moya, an analyst at online trading platform OANDA.

“Gold should remain supported in the short-term as central bank buying is strong, prospects for further global stimulus seems very likely, and as friction remains high between the world’s two largest economies.”