A week ago, I asked if oil could finish the year at $70, and by that, I meant for a barrel of , the global crude benchmark.

Looking at Brent at the time of writing — in Monday’s afternoon trade in Singapore where it hovered in the red at just around $65 — there didn’t seem much urgency on oil bulls’ part in getting to the $70 mark. And that’s kind of surprising because in theory, two of the greatest uncertainties across markets were supposed to have evaporated as of Friday — additional U.S. tariffs for China and a frozen, tortured Brexit. 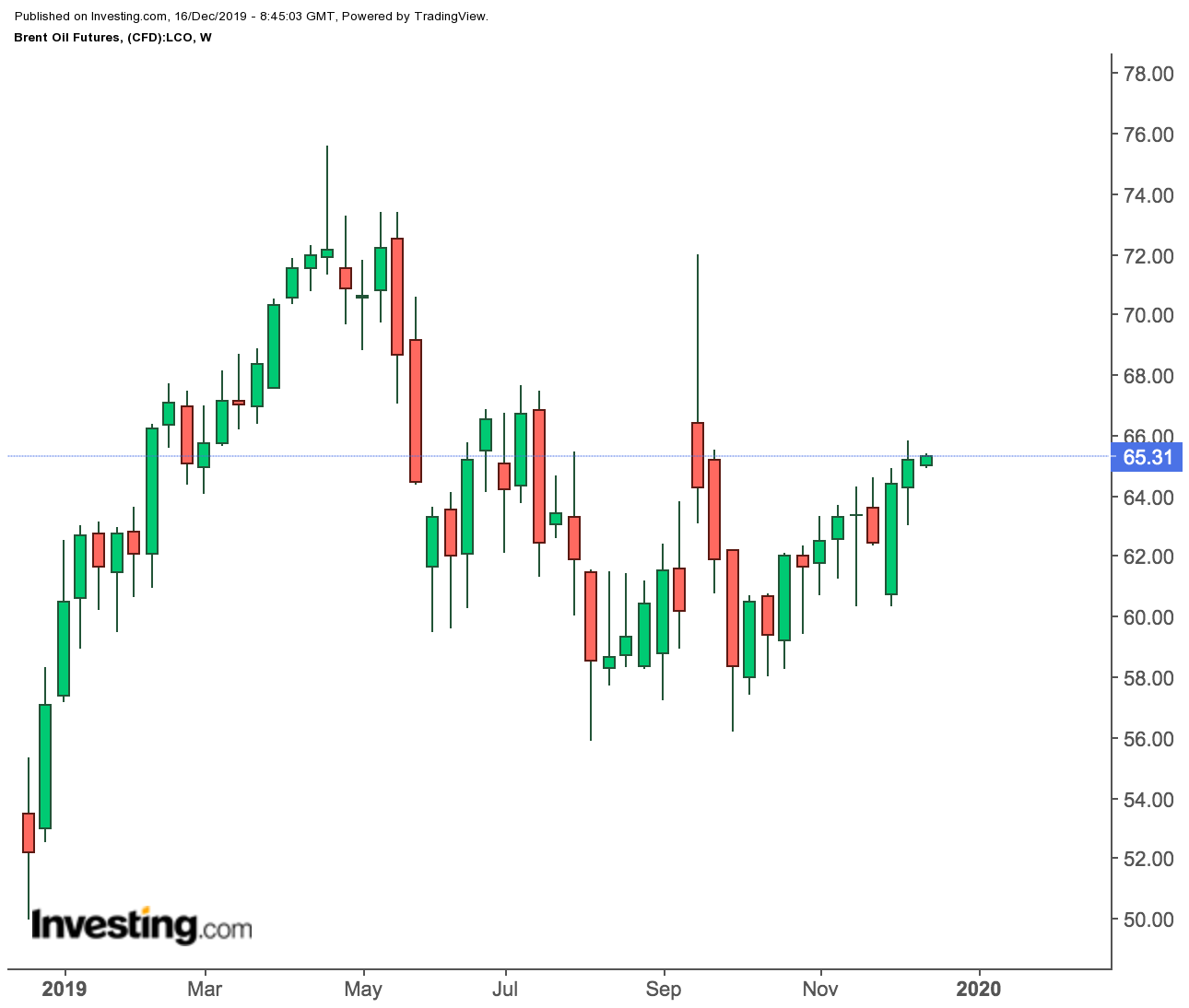 Of the two, the greater was the Trump administration’s decision to rescind its much-ballyhooed new tariff of 15% on $160 billion of Chinese imports. The administration said it was maintaining earlier tariffs of 25% on $250 billion of other Chinese imports, and another 7.5% tax on a separate batch of products worth $120 billion. But those were necessary to pressure the Chinese into buying $50 billion of U.S. farm products a year, as the White House indicated.

No Idea If Chinese Will Ratify Phase One As Trump Says

The Chinese did not say much. And that’s the problem: without a televised signing, there was no way of knowing if they really agreed to everything Trump was saying or were just buying time, as political expediency seemed to be the essence here. With Trump seeking re-election in 11 months, his focus appears to be on getting as many wins as possible as his Democratic rivals in Congress try to impeach him for alleged abuse of office.

China’s President Xi Jinping is, meanwhile, under pressure to halt any more tariffs that could hurt the world’s second largest economy.

“With so much that has transpired in the past 17 months, markets expect precise details on what the two sides have agreed to in order to gauge the success of future negotiations,” said Adam Sarhan, founder and chief executive at 50 Park Investments, a global markets investment advisory service in Orlando, Florida.

“The devil is really in the details and there’s very little of that here.”

So, the question about $70 Brent should probably be accompanied by an equally important poser: do oil traders really believe in Trump’s phase one deal, in the sense that it’s a done agreement that will be ratified soon for all to see?

Analysts at ING Economics let the Trump and Xi administrations know in no uncertain terms what the market expected of them. “What the market needs now … is clarity around exactly what the deal entails,” ING said in a note. “The longer we have to wait for this detail, the more likely market participants will start to question how good a deal it actually is.”

Chinese officials said a nine-chapter text on the phase one deal, which includes intellectual property, technology transfer, financial services and dispute settlement, has to undergo legal and translation review before it can be signed. Yet, they were cautious about the final outcome, saying both sides will have to show a willingness to compromise to resolve the more fundamental differences between them.

And sitting on top of that fundamental differences pile was the $50 billion of annual U.S. farm purchases sought by Trump. Case in point: the Chinese could simply buy grains and feedstock from Brazil and elsewhere for better prices and precise quantities, without such forced commitments. Yes, trade imbalances need to be fixed. But President Xi also has to defend China’s pride as a global power and giving in to all of Trump’s demands could make him look weak and “lose face” among his ruling party cadres and the Chinese population at large.

If Phase One Is Doubtful, What Chance Does Phase Two Have?

The fraught path ahead for phase two of the trade talks was reinforced by Trump’s tweet on Friday that the negotiations should commence right away and not wait until the November 2020 presidential elections. The Chinese did not commit to a date.

The risk of another breakdown in the talks — and for the U.S. president to once again wave the tariffs stick at China — is very real, given “the general unpredictability associated with Trump’s diplomatic style,” Richard Anderson Falk, an international law professor and China expert at Princeton University, was quoted as saying.

Given such hazards, the consternation of hedge funds to race toward $70 oil is understandable.

Another indication that commodity markets as a whole weren’t too hot about the phase one trade deal stems from the fact that didn’t exactly sell off last week. A hedge to the trade war almost throughout the 17-month long U.S.-China dispute, gold prices steadied on the upper band of the $1,400 range last week, settling at above $1,480 an ounce. While it dipped in Monday’s Asian trade, it remained not far from Friday’s peaks. 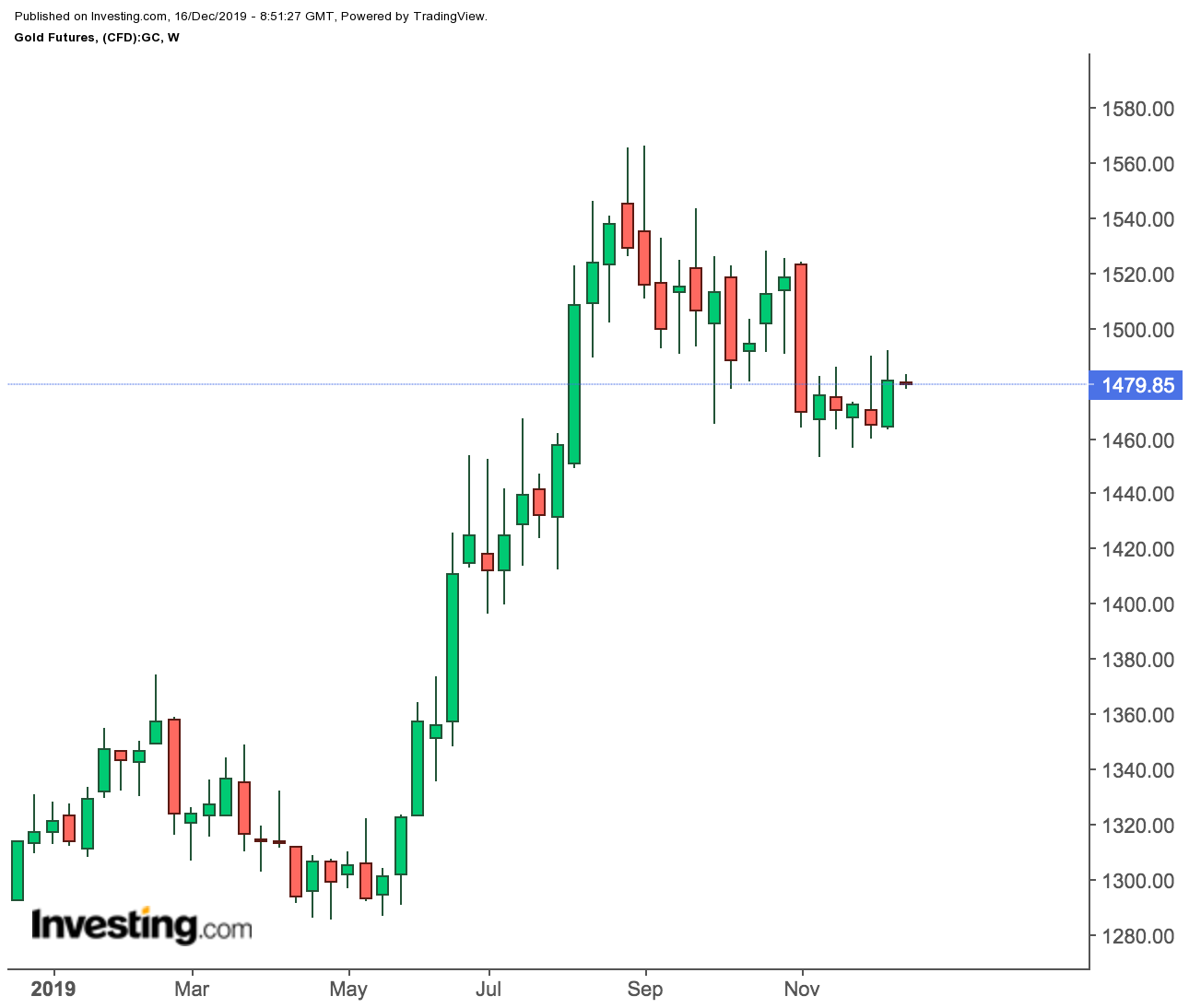 Suspicion over oil supplies itself could be a reason for caution.

As Bloomberg oil analyst Julian Lee noted in a weekend column, OPEC’s mega promise to cut as much as 2.1 million barrels, or 2.1%, per day of global supply was conditional upon every member and ally of the group — including “serial-offenders” like Iraq, Nigeria and Russia — delivering on their pledges. Even if they all did, the new cuts would barely be higher than those that came out of the previous agreement to reduce 1.2 million barrels per day, he said.

“Saudi Arabia’s new voluntary target of 9.744 million barrels a day is just 5,000 barrels a day below what it pumped on average over the past nine months, according to the production numbers it supplies to OPEC. That’s no cut at all.”

On the positive side, Brent did gain $4 over the last two weeks and if it rediscovers that momentum, it could have a shot at the $70 target before the champagne is uncorked for 2020.

If that happens, the question would be: will it hold at those highs?

Tesla put up tents to hide its ...