“Too much of a good thing.” We’ve all heard what it can lead to, and now the longs in crude are feeling it too. The rally has overstayed its welcome after six weeks of gains, and the question is how quickly the market could come down to $30 a barrel as a fresh wave of coronavirus infections looms.

As trading opened for the third week of June, both U.S. crude and futures sank north of 2% in Asian trading, adding to last week’s 8% crash.

Now, one mustn’t lose sight that WTI is still up 250% from April’s lows, while Brent has at least doubled from where it bottomed nearly two months ago. Yet the feeling that precedes a deeper sell-off seems familiar. Wider concerns about a shortfall in demand have overtaken the optimism about production curbs that gave the market its remarkable six-week run-up in the first place. 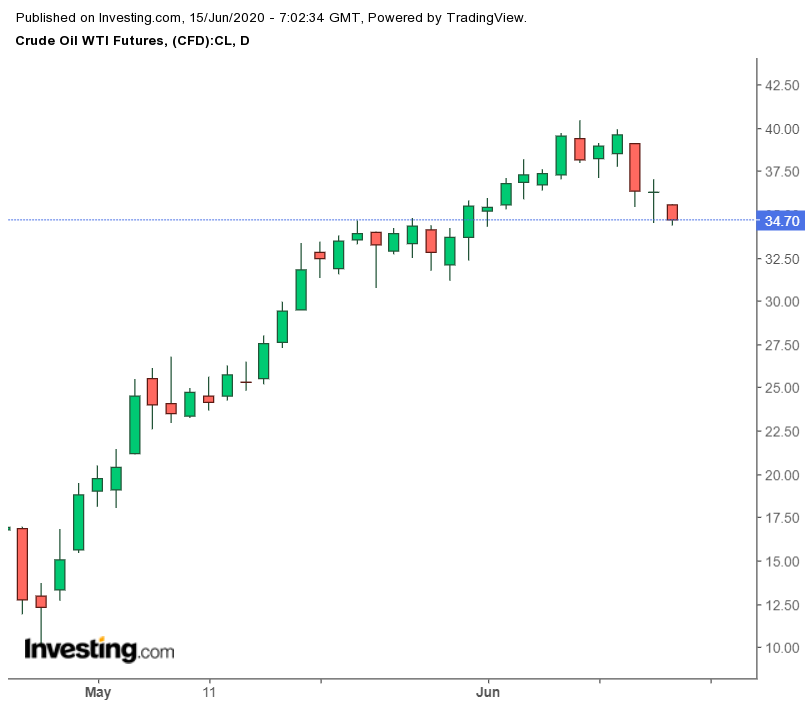 Topping those concerns were fears of a second coronavirus wave hitting the U.S., just as the first outbreak from February appeared to be subsidizing after leaving more than 1.8 million Americans infected and another 100,000 more dead.

A new wave of infections could lead to more restrictions on normal daily activity in some states that are just seeing some life, after three months of lockdowns that almost paralyzed the economy. U.S. shrank 5% in the first quarter and a double-digit drop is expected in the second quarter, possibly handing the country’s its worst recession ever.

In Arkansas on Friday, for example, Governor Asa Hutchinson, a Republican, announced a record number of cases in the previous 24 hours. In Oregon, Governor Kate Brown, a Democrat, placed a seven-day hold on lifting on loosening social restrictions. In Maryland, Baltimore announced that it would not be moving into phase two of planned reopening.

This is despite nearly 80% of Americans self-isolating in the last month and 74% wearing face coverings in public either, always, or often, according to the federal Center for Disease Control and Prevention.

Outside the United States, weekend headlines were dominated by fears of second wave of the virus, especially in Beijing, where part of the city has been locked down again to contain a localized outbreak. South Korea and Japan were also playing whack-a-mole controlling their own outbreaks, highlighting “what a persistent little beast COVID-19 really is,” said , senior market analyst at New York-based OANDA.

Halley wrote in his opening note for the week on crude:

“Like equities, the sheer weight of fast-money speculative positioning in oil, leaves both contracts extremely vulnerable to more bad news on the COVID-19 front.”

The 100-Day Moving Average for WTI at $33.80 a barrel barely provides support for a market trading below $35 per barrel, OANDA said in a note. Just a week ago, WTI hit three-month highs of $40.44, rebounding from an April 28 low of $10.07. Recapturing, let alone, cracking, that top will be quite a task now.

Brent, meanwhile, is flirting with the 100-DMA at $38.40 a barrel, as it has for the past three sessions. Its inability to pull away from that event horizon, and recover its footing above $40.00 a barrel, suggests that further losses are likely. Below the 100-DMA, the next support is at $37.00 a barrel. Should that capitulate, a fall as far as $33.50 a barrel cannot be ruled out.

Concerns Over Recovery Drag Out

Even without a second wave of COVID-19, there are concerns over how long U.S. recovery could drag out from the initial pandemic.

Federal Reserve Chairman Jay Powell said last week the central bank might leave U.S. at near zero until the end of 2022, suggesting it could take at least two years for full recovery to set in.

This is despite the encouraging return of 2.5 million Americans to the in May, after losses of more than 20 million jobs in two months prior. On Wall Street, the plunged almost 1,900 points, or 7%, on Thursday, and ended with its worst week since mid-March, on Powell’s sobering outlook for the economy. Ahead of Monday’s open in New York, were indicating another 2% drop.

Besides the virus and economy, worries about pure demand fundamentals are also weighing on oil.

U.S. grew by 5.72 million barrels last week to reach a record high of 538 million barrels, according to data from the Energy Information Administration.

Just as startling as crude stockpiles was the build in , composed predominantly of diesel. These soared by 1.6 million barrels last week, bringing inventories to nearly 53 million barrels over the past nine weeks.

Goldman Not Too Pessimistic On Oil

Despite such bearish numbers, some aren’t too pessimistic in their outlook for oil.

Goldman Sachs, one of Wall Street’s most influential voices in commodities trading, said demand for —one of the most important components of oil demand—was steadily picking up despite the surge in distillate stocks.

“Implied demand data shows gasoline demand bottomed in late April and has been improving steadily on a rolling 4-week average basis as the economy has started to reopen,” it said.

“We expect this trend to continue as the country moves forward with reopening.”

Goldman also noted that crack spreads—or the profit derived by refiners—have started to recover, although they remain below historical average levels.  The reopening of credit markets to refiners have also helped, as some have sought incremental liquidity to weather the downturn, while many have issued incremental debt.

For the current week, Goldman held its bearish near-term target for Brent at $35, while still projecting oil to rally to an average over $55 barrel in 2021.

“Most investors agree that near-term crude prices needed to pause. That said, between OPEC supply reductions, North American discipline and the absence of Top Projects, most see upside to the forward curve. We believe most investors are running more favorable 2021 Brent oil expectations in their models relative to forwards prices, with a wide range around this, varying on comfort on global demand levels next year.”

In the case of , a week after being crushed by the best U.S. jobs report in three months, the price is back in the key $1,700 territory, though a continued closing-out of positions was hampering its advance. 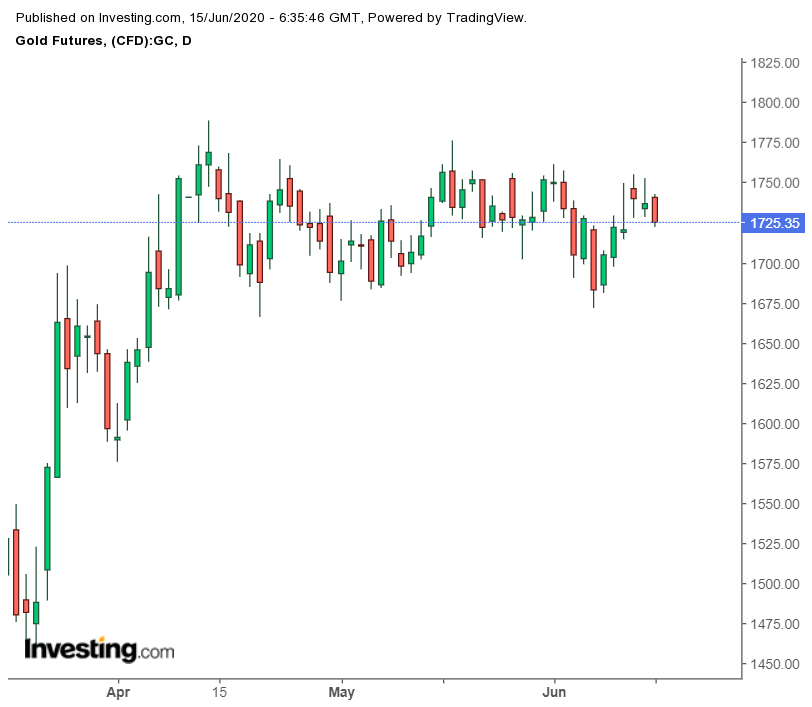 “It is not until we break above the $1775 level that I am a buyer up here though, as I would prefer to see a lot of resistance broken before going long,” said Christopher Lewis, an analyst at FX Empire.

“However, if we get a little bit of a pullback, I think it makes quite a bit of sense that there would be value hunters underneath, especially near the $1700 level,” Lewis added.

What to know about Trump’s executive order ...