Storage vs demand—which will win? So far, it looks like it’s storage that will determine the direction for oil prices in the near term.

Optimism that U.S. states coming out of coronavirus lockdowns will start the ball rolling on fuel demand sent crude prices up for a second straight week. The problem was the gains on the West Texas Intermediate—25% last week, after 17% the previous week; and a total of 100% from the lows of 10 days ago—seemed too much for whatever nascent recovery would come. 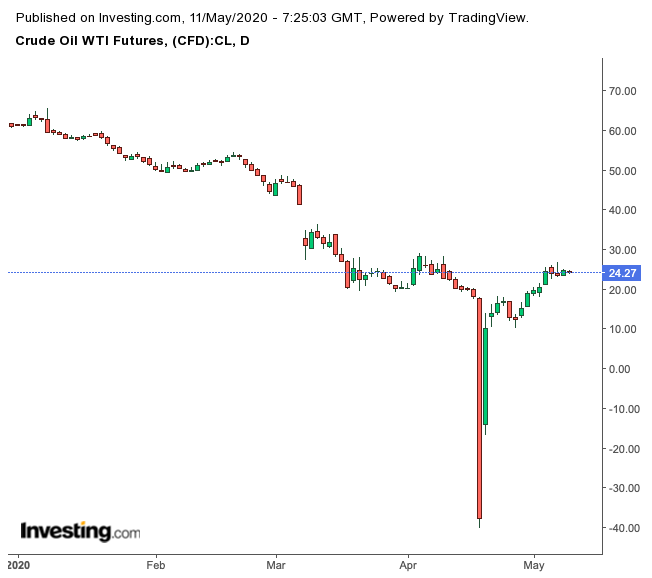 Storage of crude has, meanwhile, grown with little letup.

About 70 VLCCs, or Very Large Crude Carriers, have been stationary for at least four weeks in international waters, shipbroker Gibson reminded the market in a blog issued toward the end of last week.

Contango Play Could Be Revived

That proves that the “contango play” in oil—where the discount in crude’s front-month versus the nearest contract makes the commodity worth for storing—could be revived, Gibson suggested.

was at a discount of less than $1.30 to July WTI while its London-traded peer, was less than $1.10 to its August contract.  The WTI contango was about 20 times larger less than three weeks back when U.S. crude fell to its first-ever negative pricing toward the expiry of its then May front-month.

While another fate like that might not befall the current front-month, the growing storage for U.S. crude is beginning to spook some in the market.

Some 28 tankers with Saudi oil, including 14 VLCCs carrying a total of 43 million barrels, have started arriving on the U.S. Gulf and West coasts in stages.

The Saudi flotilla will join dozens more tankers waiting to unload in U.S. ports. Thirty-four tankers are off the U.S. West Coast, laden with about 25 million barrels of crude. Another 31, carrying a similar load, are waiting to unload at the Gulf Coast.

The Trump administration is under pressure to slap tariffs or take other punitive action on the incoming Saudi oil to prevent them from adding to the U.S. glut. But that will be difficult considering the Saudis have already started “playing ball” with President Donald Trump—by agreeing first to the new round of production cuts, then raising their official selling prices to Asia in a bid to get the broader market price of oil up.

“Crude futures are volatile and the pricing structure could change dramatically in the weeks ahead,” Gibson cautioned in last week’s note. “When it comes to floating storage, the picture will continue to evolve.”

“It remains to be seen how many tankers fixed for time charter business recently will actually be tied up in storage for an extended period of time. Similarly, with the spot market being at much lower levels, new opportunities to lock into a contango play could also emerge. Watch this space.”

Well Shut-Ins Will Slow As Prices Remain Up

Goldman Sachs had more ominous words for crude longs in a note issued to clients on Friday.

“While investors are modestly less negative on demand, the move up in Brent to near $30/bbl and WTI to near $25/bbl is adding concern that we may be sacrificing upside to oil prices in the future for price levels now that would result in a sooner-than-desired reversal of existing well production shut-ins.”

“This has continued to keep specialists disconcerted, particularly regarding companies with weaker balance sheets, including those that may be protected from lower prices in 2020.”

All this indicates that the timer may have started on oil’s rally.

“What we’re seeing right now is the head fake before another surge in CV (crude volume) that pushes storage to maximum capacity & oil prices to new lows,” said a weekend tweet from Art Berman, who has nearly 22,000 followers on Twitter, made up mostly of oil and gas professionals.

A petroleum geologist-turned-investment analyst with over 35 years in the business, Berman specializes in the study of comparative crude inventory. In his words, the current rebound is “reminiscent of the March-June 2015 false oil-price rally, before markets accepted that things weren’t going back to the way they were before.”

Five Oil Rallies In Past Two Years Have Failed

This isn’t to say that crude prices won’t experience another surge if the current rally fizzles. The sheer collapse in U.S. and anticipated well shut-ins mean the greatest mismatch in supply/demand will probably be behind us at some point, as Morgan Stanley suggests. But that’s for the future. The oil market’s problem, however, is the “now.” compared to the trajectory of production losses, and that will eventually max out storage capacity. And that will kill the present rally before too long.

Crude Builds Slowing, But U.S. Economy Is Worsening Too

While have slowed in Cushing, Oklahoma—the delivery point for expiring U.S. West Texas Intermediate crude contracts—the hub itself is just about 11 million barrels to hitting capacity. And most of the space in Cushing has been leased out already, according to those in the know.

The U.S. economy, meanwhile, is continuing to bleed both jobs and growth.

The Labor Department said another 3.17 million Americans lost their jobs for the week to May 2, bringing to more 33 million the number who have been laid off since the pandemic struck the United States in a big way.

The consumer-driven U.S. economy shrank 4.8% in the first quarter. While that was already the sharpest decline in a quarter since the 2008/09 financial crisis, economists predict that the current quarter would be worse, as the now mostly-reopened economy was unlikely to show much recovery until the July-September stretch.

Gold’s Move Up May Depend On China

On the precious metals side, is likely to remain well under $1,750—unless, of course, Trump decides to break ranks with China on trade to sue Beijing for virus-related U.S. deaths. 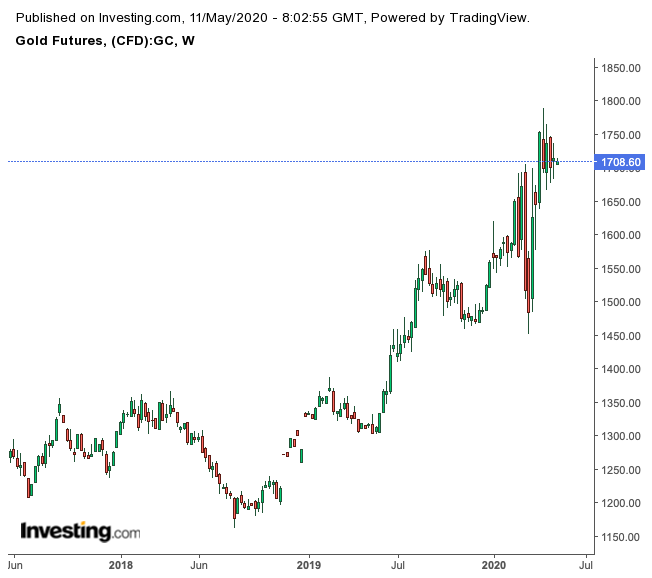 U.S.- China trade tensions look set to continue to simmer after Trump told Fox News Channel on Friday that he was “very torn” about whether to end the Phase One trade deal with Beijing. Trump’s administration is weighing punitive actions over China’s early handling of the coronavirus outbreak, including possible tariffs and shifting supply chains away from the main U.S. supplier of virtually everything.

“It would be extremely destabilizing if the president pulled out of the agreement without giving the Chinese a chance to meet their commitments,” says Craig Allen, president of the U.S.-China Business Council.

Trump has said he would terminate the trade deal if China fails to meet its purchase commitments. He said on Wednesday that he would know within a week or two whether that was possible.

Jeffrey Halley, senior market analyst at New York-based OANDA said a decisive anti-China move by Trump may be the catalyst needed for a safe-haven rally in gold, which has yet to establish a clear direction in May.

“Gold remains anchored in the middle of its larger $1650 to $1750 an ounce range. Until one of those sides breaks comprehensively, the cheap seats of the financial market’s theatre,” said Halley.

The biggest US mall owner plans to ...