The most talked about story in the oil market this week might not do much for the price of oil itself.

Saudi Aramco’s stock sale, coming after a four-year wait, has hogged energy headlines since being greenlighted on Sunday.

Yet, oil traders could be looking away from the desert kingdom’s gigantic IPO and toward the Far East for price direction.

Focus On China, Not Aramco 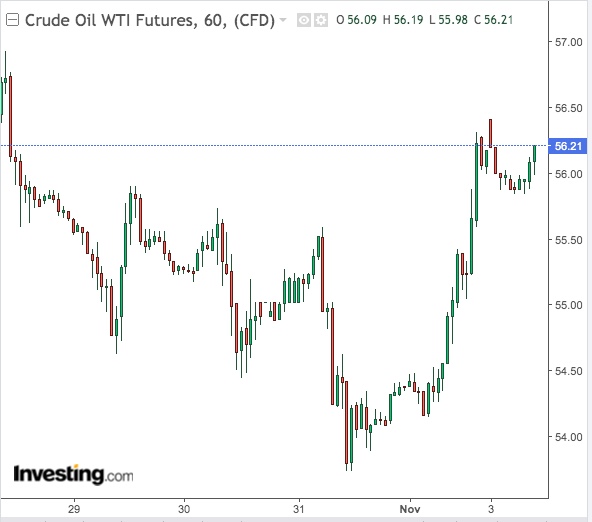 China could again determine how crude markets move this week, after Friday’s rally of more than 3% on both and .

Friday’s rally in oil was fueled by Beijing’s statement that it reached a consensus with the White House on core concerns in their trade war.

However, those gains may be untenable if there are no positive developments this week on the China-U.S. negotiations.

Lots Of Reasons To Maintain Trust Deficit In Trade Talks

Indeed, China’s Ministry of Commerce, in its statement, said more talks were required.

The history of on-again, off-again talks between the two sides would more than justify investors’ trust deficit in the negotiations.

Taoran Notes, a blog affiliated with China’s state-run Economic Daily, said on Saturday that “for China, removing all the additional tariffs is a core concern that has not changed and will never change even if there is a first phase deal, this core concern should be reflected.”

Strong U.S. Jobs Report Could Be An ‘Extraordinary Event’

Another factor providing octane to last week’s oil rally was the U.S. jobs report for October.

rose by 128,000 last month, the U.S. Labor Department reported. Analysts polled by Investing.com had only expected a rise of 89,000. The 45% beat on consensus was huge by any standards—and the broader markets responded accordingly, sending the to record highs.

Yet, sobering some of that ebullient jobs report was the revision to September’s original jobs report, where hiring was revised up to 180,000 from an initially-reported 136,000.

Also, job numbers differ each month and there’s no certainty that November’s figures will be as good as October’s. So, last month’s labor outperformance could at best be an “extraordinary event”.

It’s important for investors to remember that until the threat of the trade war is fully or sufficiently defused, and permanent or acceptable solutions are found for Brexit and other troubles, global oil demand could remain in limbo.

On top of this, dropped to an annual rate of 1.9% in the third quarter. While that was above Wall Street expectations, it still raised concerns about investment and growth ahead, as the stimulus of tax cuts disappears.

Taking all this into consideration, the International Energy Agency for oil for the current year and the next. While noting that demand rose by 800,000 barrels per day in July and 1.4 million bpd in August, the IEA lowered its forecast for demand growth in 2019 by 100,000 to around 1.0 million bpd. It reduced its forecast for 2020 by the same amount to 1.2 million bpd.

So, if nothing emerges from China, the only thing that might move oil prices this week will be Wednesday’s regular supply-demand update from the U.S. Energy Information Administration.

Last week, the EIA shocked the market by reporting a of 5.7 million barrels for the week ended on Oct. 25, versus the build of some 494,000 barrels anticipated by the market.

However, declined by only 1 million, compared with expectations for a drop of 2.35 million. That’s a sign that the large implied demand seen for diesel, jet oil and other transportation fuels through most of October may be thinning.

One reason for the smaller inventory drawdown in distillates could be that refiners who had just come out of maintenance had intensified their production of middle barrel products, adding to the floating supply of those. Refinery runs did increase by 2% during the week in review—but at 87.7% of operable capacity, they are still well below the norm of at least 90% for this time of year.

Moreover, production remained stubbornly at record highs of 12.6 million bpd for a fourth week running, the EIA said, despite the number of rigs actively drilling for oil in the U.S. collapsing to 30-month lows.

So, it remains to be seen what this week’s EIA dataset will bring for oil production and demand.

In the case of gold, its resilience above $1,500 surprised some market participants who had expected the yellow metal to tumble sharply after the Federal Reserve all but indicated an end to further rate cuts, after Wednesday’s 25-basis point —the third since July. 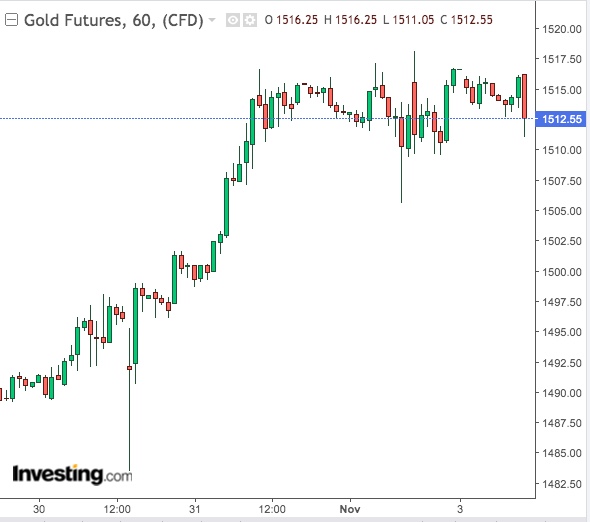 Gold did break briefly below the $1,500 mark after the Fed decision. But by Thursday, it was back above the level on a Bloomberg story of fresh troubles in China-U.S. negotiations—which, by the way, landed a day before the China Ministry of Commerce statement.

In Monday’s early trade in Asia, both for December delivery on New York’s COMEX and , which reflects trades in physical bullion, traded at above $1,510.

As it stands, a safe haven like gold should have plunged on Friday when the S&P 500 soared to a new record high. Gold bulls instead justified the rally in the yellow metal by pointing to the weaker .

This week will tell.