Commodities Week Ahead: Oil Rallies Beyond $40; Gold Keeps Focus On $1800

bulls will look to extend their advance into $40 territory this week, based on expectations for sizable fuel demand during this past US Independence Day weekend. The Trump administration’s belittling of the coronavirus pandemic will also help those who are long crude.

dropped by 7.2 million barrels during the week ended June 26—about 10 times more than forecast—and traders will be justified in expecting another decent drawdown for the week running up to the Fourth of July holiday. 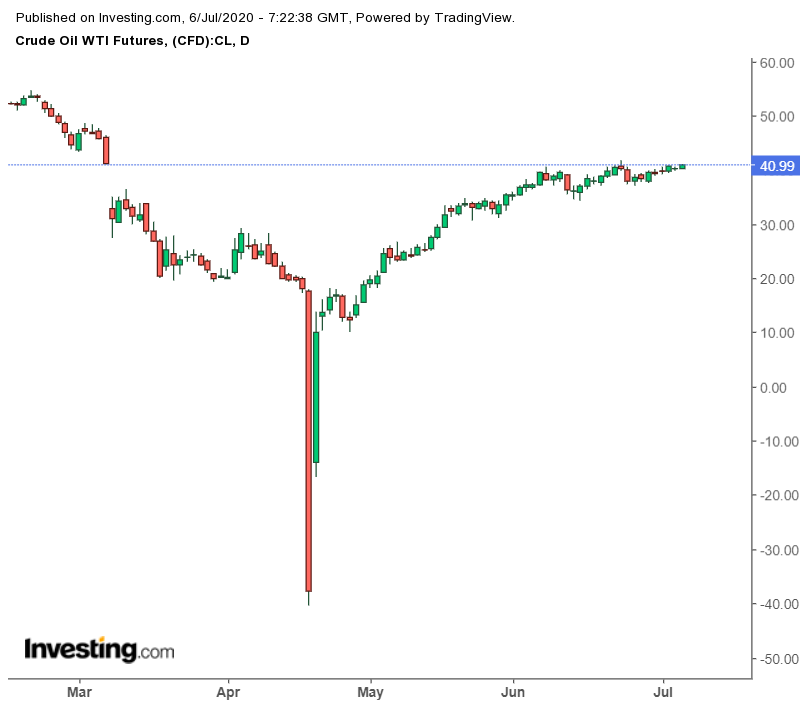 And while US crude production and are no longer crashing like they did three months back, the Organization of the Petroleum Exporting Countries is continuing to tighten the noose on global output to ensure no let up in the market’s upward momentum.

The Saudi-led and Russia-assisted OPEC+ alliance of some two dozen oil exporters has pledged to slash production by a record 9.7 million barrels per day for a third month in July. From August, the cuts are due to taper to 7.7 million bpd until December.

Crude To Run Further Above $40

Collectively, the decline in US crude stockpiles and the OPEC+ cuts provide an adequate support base for West Texas Intermediate and crude futures to extend their rally above $40 this week.

Still, surging cases of COVID-19 could temper the bullishness in crude and pose headwinds for the market, and oil bulls need an effective antidote to neutralize that fear.

Enter , who claimed at the weekend that 99% of COVID-19 cases were “harmless.”

The president’s observation came despite Texas, the largest US oil refining state, and Florida, the leisure hub of America, both reporting their in new confirmed cases of coronavirus over the past few days, bringing total deaths across the country to nearly 130,000 and infections to over 2.8 million.

Should the new wave of the outbreak trigger panic, it could prompt state governors to shut their economies again, like they did in March through April, hitting economic recovery and oil demand. The Trump administration is doing all it can to prevent that.

Stephen Hahn, commissioner of the US Food and Drug Administration, appeared at pains on Sunday not to openly contradict Trump’s remark that 99% of new COVID-19 cases were not risky, saying it’s “a serious problem that we have” and “we must do something to stem the tide.”

Jeffrey Halley, senior market strategist in Sydney for online trading platform OANDA, said financial markets’ “herd immunity” to the pandemic has been reinforced by attempts to downplay the resurgence of the virus.

“Oil prices seem evenly balanced between opposing forces at the moment,” said Halley. “On the one hand, the procession of economic data released last week is emphasising that a global recovery is underway for now,” he said.

“On the other, having rallied so far on so little since mid-March, nagging doubts over the recovery’s longevity are capping gains.”

Volatility Ahead For Gold Bugs

On the gold front, the safe-haven crowd which finally saw the price hit $1,800 last week may have to await a while for bigger paydays of $2,000 an ounce and beyond, as new bouts of volatility are expected from the face-off between risk and the second wave of COVID-19. 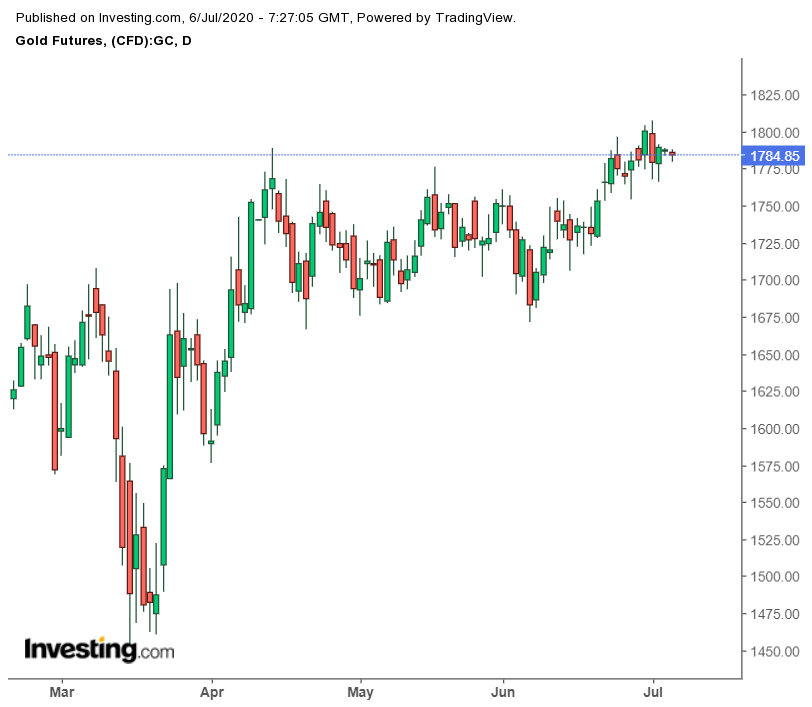 Gold’s advance was blunted by risk appetite that drove Asian equity indices to four-month highs on Monday, fuelled by expectations of super-cheap liquidity and fiscal stimulus to sustain the global economic recovery.

“We’re seeing some big gains in Hong Kong and Chinese share markets,” and that sort of growth-positive movement is generally expected to weigh on gold, Michael McCarthy, chief strategist at CMC Markets, was quoted saying by Reuters.