Commodities Week Ahead: Oil Pricing Lost On Risk Premium; Gold Back At $1500

The fact that oil needs a higher geopolitical premium after the Saudi attack is not really for debate. The question is how much that premium ought to be.

prices saw an exaggeration last week of the yo-yo patterns from August. Following a near 15% jump in the first session after the attack, oil sold off a chunk on the notion that there was enough supply in the world, as the United States and other governments stood ready to tap their reserves. Saudi Aramco’s assurance that all lost production would be restored within weeks also gave traders the feeling the rally was overdone.

To the relief of oil bulls, still managed to record its best week since December, while WTI posted its largest weekly gain since June, with both rising about 6% on the week. 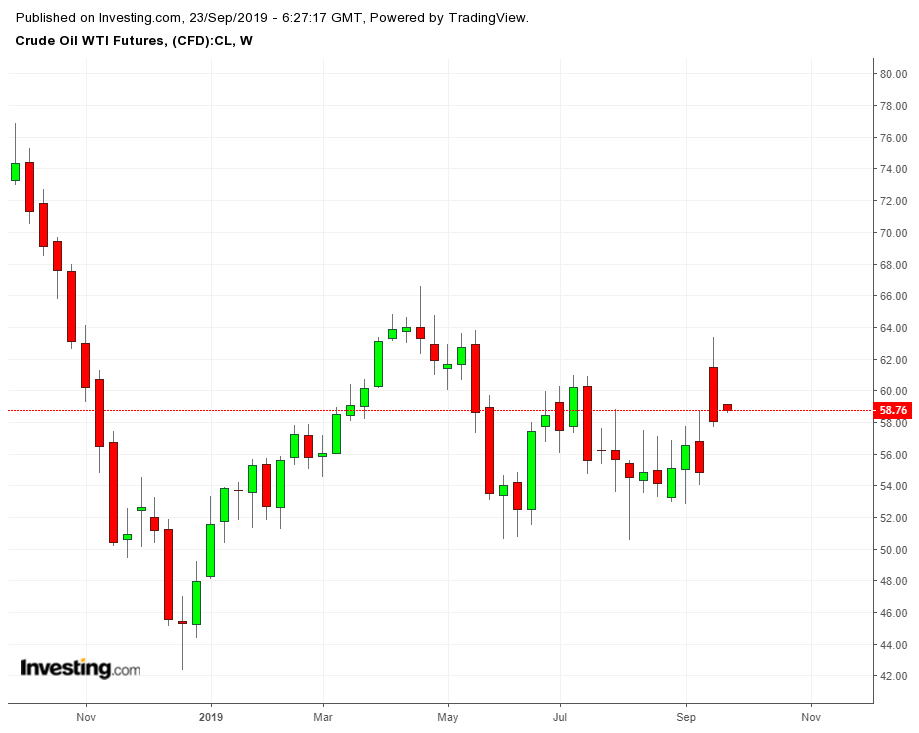 With a new week in, traders are scratching their heads again on what would be the appropriate risk pricing for oil. And there are many variables to muddy that outlook.

The Wall Street Journal reported on Sunday that foreign diplomats were warned by Houthi militants in Yemen that Iran was preparing a follow-up strike to last week’s air raids on Saudi Arabia’s Abqaiq crude processing plant and Khurais oil field. Houthi rebels initially claimed responsibility for the Sep. 14 attack but the United States blamed Iran instead — a charge the Islamic Republic has denied.

Houthi claims have long been met with skepticism by Western officials and the latest warning couldn’t be independently verified, the Journal reported, quoting people familiar with the matter.

That the Houthis, who are diehard allies of Iran, would prefer to alert the world to such an attack instead of carrying it out is bewildering. According to the Journal, the Yemen-based rebels ratted on Tehran because they were being pressed to play a role in the upcoming strike. That makes the whole affair sound even more incredible.

Notwithstanding the Houthi claims, the Trump administration said on Friday it was sending additional troops, along with enhanced air and missile defense systems, to Saudi Arabia and the United Arab Emirates as precaution. Many military strategists believe the UAE, a staunch Saudi ally, would likely be the next target for an attack.

Iran, meanwhile, maintains its innocence, and has vowed an “all-out war” if the U.S. or Saudi Arabia were to push it into battle.

The start of important speeches at the U.N. assembly this week adds to oil market uncertainty. With both U.S. President Donald Trump and Iranian leader Hassan Rouhani set to address the assembly and hold meetings on the sidelines, there are chances for more fiery speeches, on-the-fly policy making and buildup of tensions.

For what it’s worth, Trump continues to hold out hope for a meeting with Rouhani to resolve the Iranian sanctions situation that could defuse much of the current crisis in the Middle East. But Rouhani’s aides are resisting such a meeting, on the concern that their president will come away empty-handed — earning the ire of the Iranian people — while Trump gets top marks for trying. With the 2020 U.S. election year closing in on Trump, he’s doing all he can to burnish his credentials as a dealmaker.

All this makes the right geopolitical premium for oil anyone’s guess.

Dominick Chirichella, director of risk and trading at the Energy Management Institute in New York, noted that despite the drama sparked by the Saudi attack, WTI’s premium on the week was a modest $3.65 per barrel versus Brent’s $4.68.

“Despite Saudi Arabia fully supplying their customers, the market is not ready to declare all back to normal.”

“With all signs pointing to Iran as the source of the attack, market participants remain concerned that further action could occur with the potential for additional supply interruptions.”

Lack Of Clarity On Oil Supply

Exactly how much supply will be available in coming months is an enigma to traders.

Aramco says half of the 5.7 million barrels per day (bpd) of production initially lost from Abqaiq was restored in days, and the balance will be back online by the end of September. Industry analysts are skeptical about this.

Repairs at Abqaiq will likely take months to complete, consultant FGE said in a Sep. 18 report. Full restoration of pre-attack capacity could stretch till the year-end, Rystad Energy, another consultancy, said.

Aramco is unlikely to acknowledge such views even if they’re right, for fear of damaging its upcoming share sale. The Aramco IPO has been beset with woes since it was conceived in 2016 as persistent bear markets in oil and other challenges have frustrated aims to value the firm at a world record of $2 trillion. In a strong push last week, Aramco named the bookrunners for the listing, showing its determination to move on from the Sep. 14 attack.

Surge In U.S. Production Despite Slump In Shale Drilling

Another thing that’s key to oil’s risk pricing is, of course, is U.S. drilling.

As of Friday, industry firm Baker Hughes’ weekly survey of the U.S. oil drilling landscape showed the number of actively-deployed rigs falling by 14 to reach 724, the lowest since May 2017.

Despite such drops in drilling activity, remains in an overall uptrend, setting new records on a weekly basis.

Total output is now about 12.7% above where it stood the same week a year ago. The U.S. Energy Information Administration latest weekly dataset shows production at 12.4 million bpd, just slightly below under its all-time record high.

Put it another way: The U.S. upstream sector has 55% fewer drilling rigs but is producing nearly 40% more oil than during the highs of October 2014.

In , the story is somewhat the same as oil as the yellow metal returned to its $1,500 perch after longs in the market priced in the political risk from the Saudi attack and potential for a global recession if the U.S.-China trade war continues to drag. 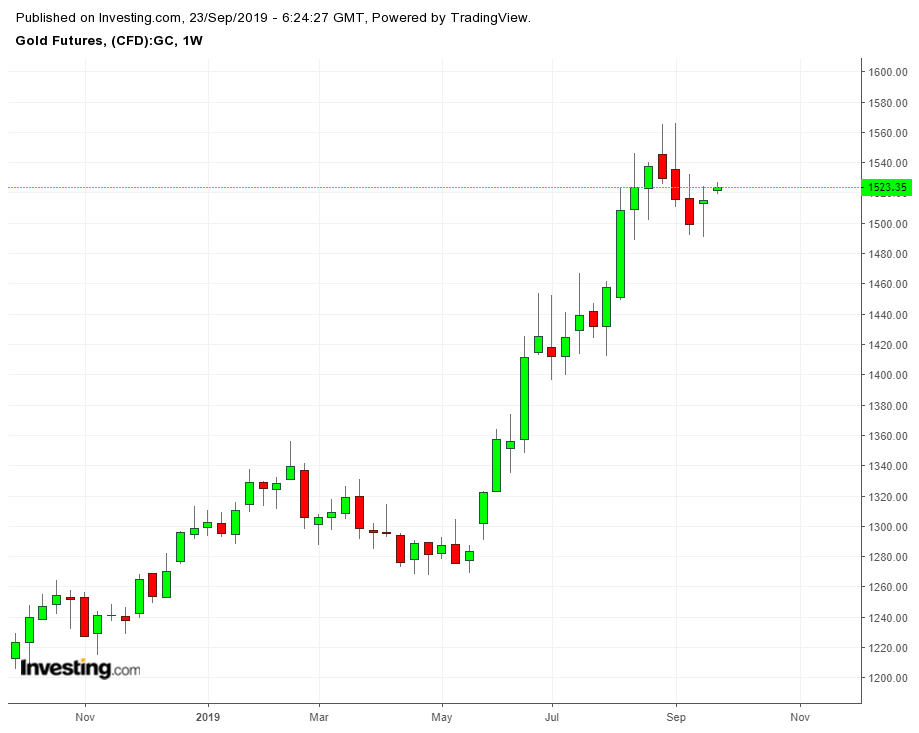 Notwithstanding the bullish , gold remains the safe haven of choice and top macro trade for anyone worried about plumbing U.S. bond yields.

is up almost 18% on the year while gold futures show a gain of about 16% after weathering choppy moves last week from another mild quarter point by the Federal Reserve.

Gold was in a better place last month as it effortlessly hit 6-year highs and seemed ready to even cross into $1,600 territory from a rally that began in June.

Trump says he will release transcript of ...