Commodities Week Ahead: Oil On The Ropes; Gold Eyes $1,600

When Abdulaziz bin Salman delivered his surprise production choke to oil bears in December, the Saudi Energy Minister was only concerned about turbo-charging oil prices as much as possible for the kingdom’s soon-to-list Saudi Aramco (SE:). Global risk aversion caused by a virus was the last thing the new OPEC chief would have anticipated.

Yet, here he is, staring at the newest crisis the Organization of Petroleum Exporting Countries has been thrust into, just months after his stewardship of the cartel began.

By late afternoon in Asia on Monday, U.S. crude’s (WTI) futures had hit 16-week lows of $52.19 per barrel, reinforcing expectations that it will fall beneath the all-important $50 support on the coronavirus-driven selling. U.K. , the global crude benchmark, was already under its $60 support, after hitting 14-week lows at $58.68.

No End In Sight To Oil’s Collapse

For a better perspective, in just a week, WTI has lost almost 11% and is on track to finish January down more than 13%, its biggest loss since November 2018. Brent is down about 9% in a week and off about 11% on the month, heading for its sharpest decline since May. 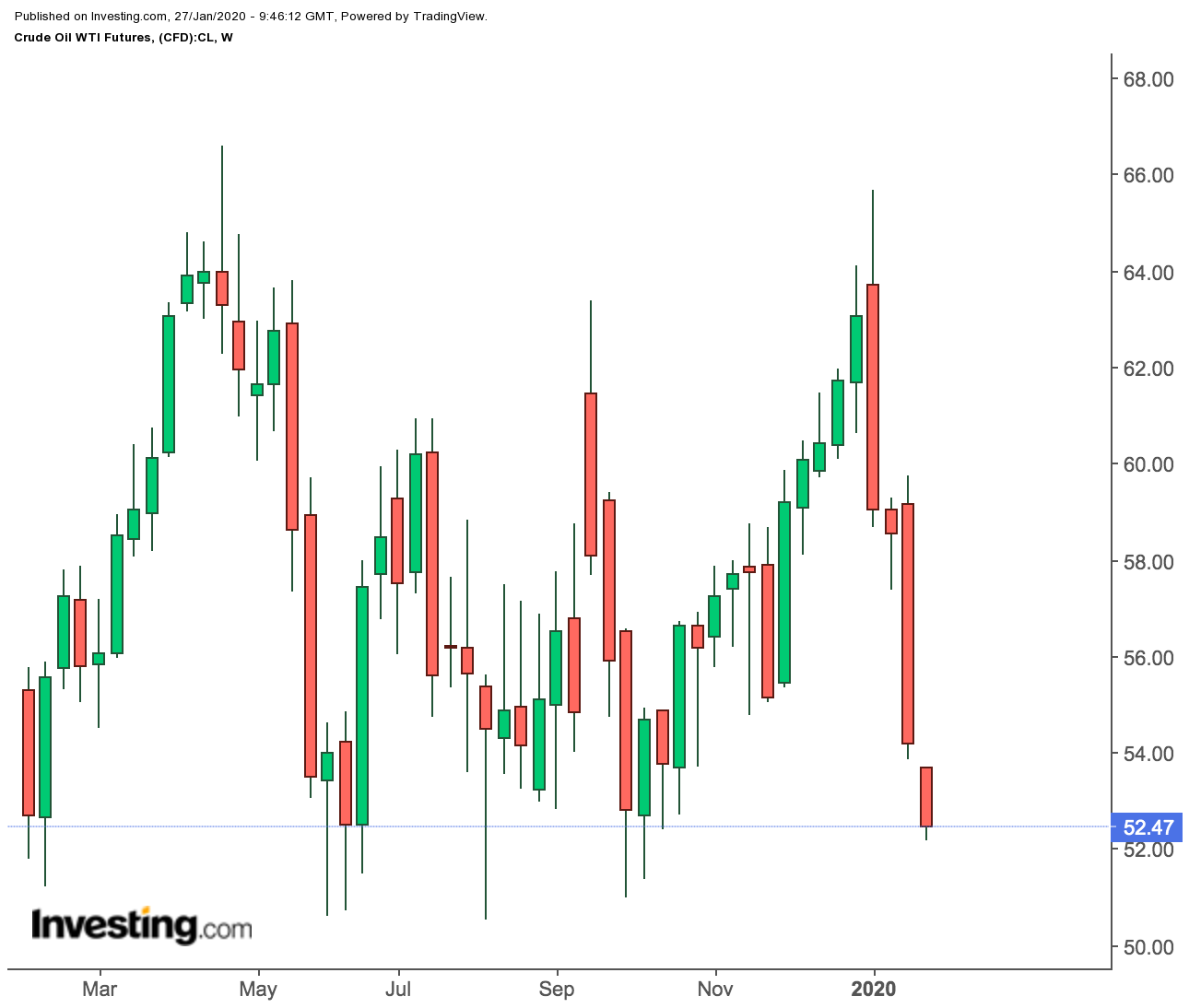 OIl’s collapse came as confirmed infections from the coronavirus jumped to more than 2,700 in China alone, where the pandemic began. Chinese officials said at least 80 have died from ailments related to the virus and more than 461 are in critical condition.

Progress reports from China show the situation worsening by the hour. Wuhan, the Chinese city at the epicenter of the virus outbreak, is in virtual lockdown. Medical supplies and hospital beds are running out and there is a clampdown on multiple neighboring cities.

Hundreds of millions of Chinese travelers are stranded and celebrations for the country’s biggest festivity, the Lunar New Year, have been canceled. The tourism and leisure industries look set to suffer significantly, with Shanghai Disneyland, cinemas, even some McDonalds, closed.

Outside China, 12 countries have reported infections from the virus — Australia, Canada, France, Japan, Malaysia, Nepal, Singapore, South Korea, Taiwan, Thailand, Vietnam and the United States. The World Health Organization has stopped short of declaring the crisis an international concern, despite calling it an “emergency in China.”

On the markets front, stocks have taken a hit as well. The fell nearly 1% on Friday, the most in a day since October, indicating that Wall Street’s months-long resilience against rival stock markets might be threatened.

But Prince Abdulaziz seemed unperturbed, believing the coronavirus to be a transient problem that had been overplayed.

Markets are being “primarily driven by psychological factors and extremely negative expectations adopted by some market participants despite (the virus’s) very limited impact on global oil demand,” he said on Monday.

A half-brother to Saudi Crown Prince Mohamad bin Salman, Abdulaziz took over the reins of the energy ministry and OPEC in September. He was resolute in bringing oil prices to a “stable high” — and seemed to be succeeding when WTI rose above $65 and Brent reached over $71 as recently as just three weeks ago. 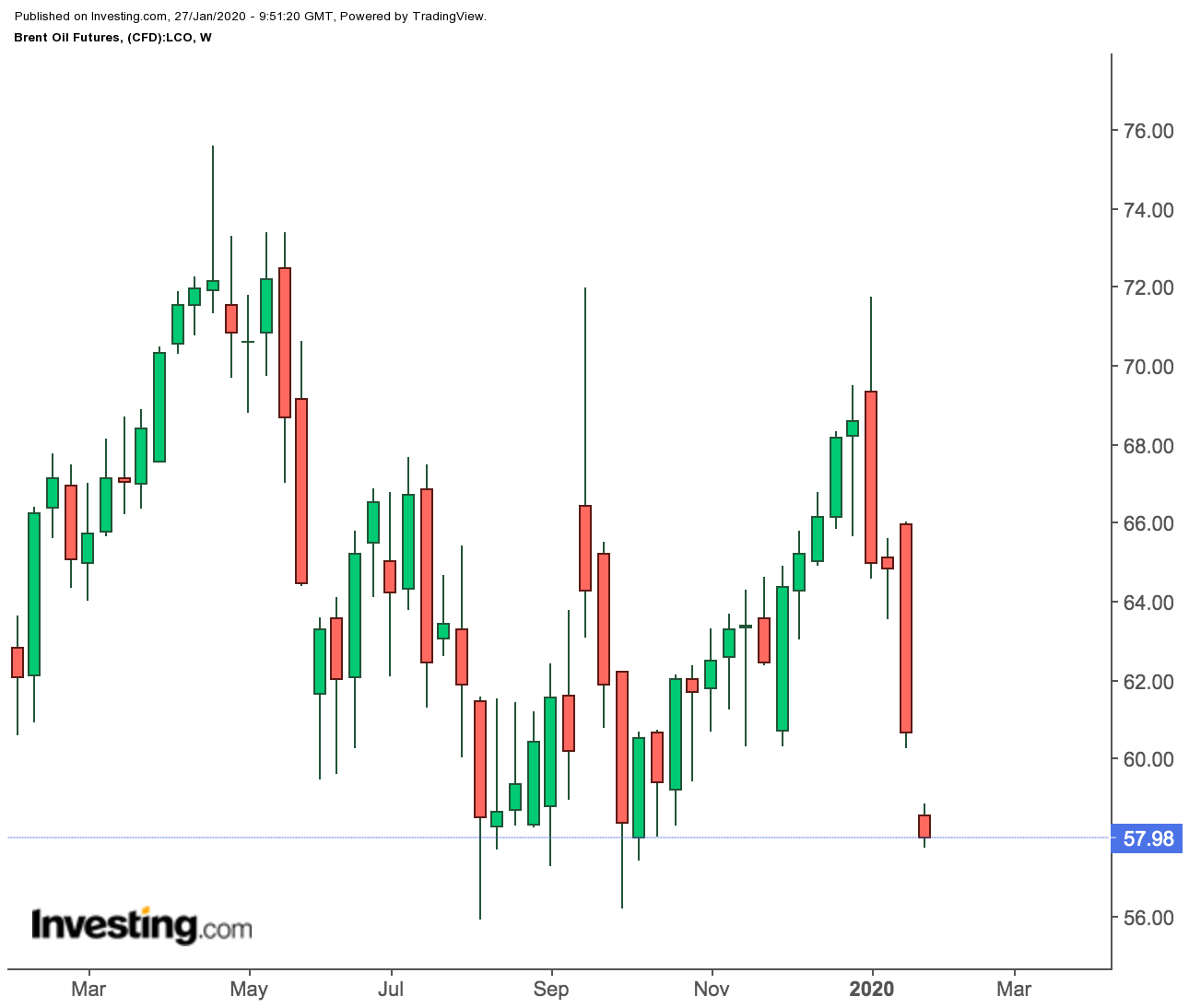 But the supply squeeze the prince had applied on the market back in December — through a planned widening of production cuts to 2.1 million barrels per day from 1.2 million bpd — is almost forgotten now. The market is also barely reacting to tensions in the Middle East that easily caused prices to spike just weeks ago. Reports of rockets hitting the U.S. embassy in Baghdad at the weekend were all but ignored in Monday’s trade.

Not to be outwitted, Abdulaziz indicated on Monday he still hadn’t played all his aces against the oil bears. He signaled that the extended OPEC+, which includes non-members like Russia, will likely vote for production cuts all the way through 2020 when it meets in March — instead of just reviewing its output.

Further refuting the impact of the coronavirus, he said similar pessimism occurred during the 2003 outbreak of SARS — another China-originated virus that caused about 8,000 infections and nearly 800 deaths — but it “did not cause a significant reduction in oil demand” even then.

It’s A Different China Today From 2003

What the Saudi minister is probably overlooking is that today’s China is quite different from the China of 17 years ago. In 2003, China was the sixth largest economy in the world, with oil demand at that time of about 5 million barrels per day.

Now, it is the second largest economy, consuming more than 9 million bpd last year, or almost 90% of the equivalent of Saudi production. And in case Abdulaziz needs any reminder, most of Saudi oil is exported to China.

The point of the matter is this: the longer China remains in crisis from the coronavirus, the greater the challenge to the world’s oil producers who sell to Beijing. And that includes the United States, which hopes to sell $52 billion of energy products to China, including crude, over the next two years under the phase one trade deal between the two countries signed two weeks ago.

Of course, two years is a long timeline and no one conceivably expects the crisis in China to drag out that far out. Yet, the damage to oil prices cannot be contained easily if Chinese buying doesn’t recover quickly enough, regardless of how much OPEC cuts.

To underscore my point, Jeffrey Halley, senior market analyst at OANDA in Singapore, says oil is unlikely to find many buyers “until signs of concrete progress have been made on the control … of the coronavirus.”

On the precious metals front, the call is much simpler.

Gold’s upside will endure as long as Wall Street continues to swoon. With the safe haven’s resurgence from late last week already taking and U.S. above the psychologically-important $1,580 level, the near-term target appears to be a return to the seven-year highs above $1,600 hit earlier this month. 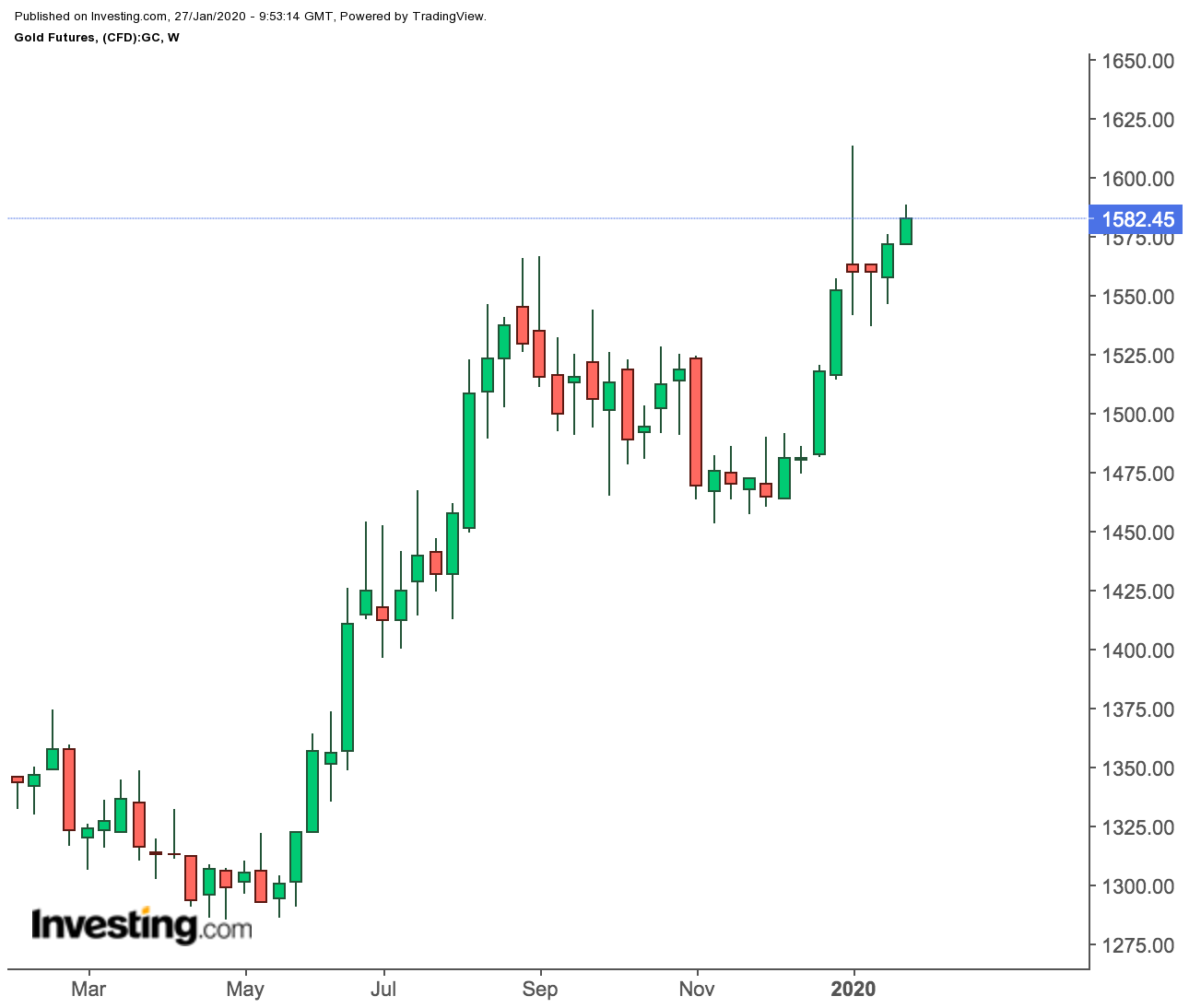 For this week particularly, investors in precious metals, like investors across markets, will have to watch what the Federal Reserve announces as on Wednesday. But with the U.S. economy on a steady keel so far, no one expects the Fed to do much other than tweak the language of its policy, and that should bode well for gold.