This week bulls will focus on the start of the US Atlantic hurricane season, which could disrupt key energy installations on the Gulf Coast of Mexico, and also the long Memorial Day weekend that flags the peak driving season in the United States. 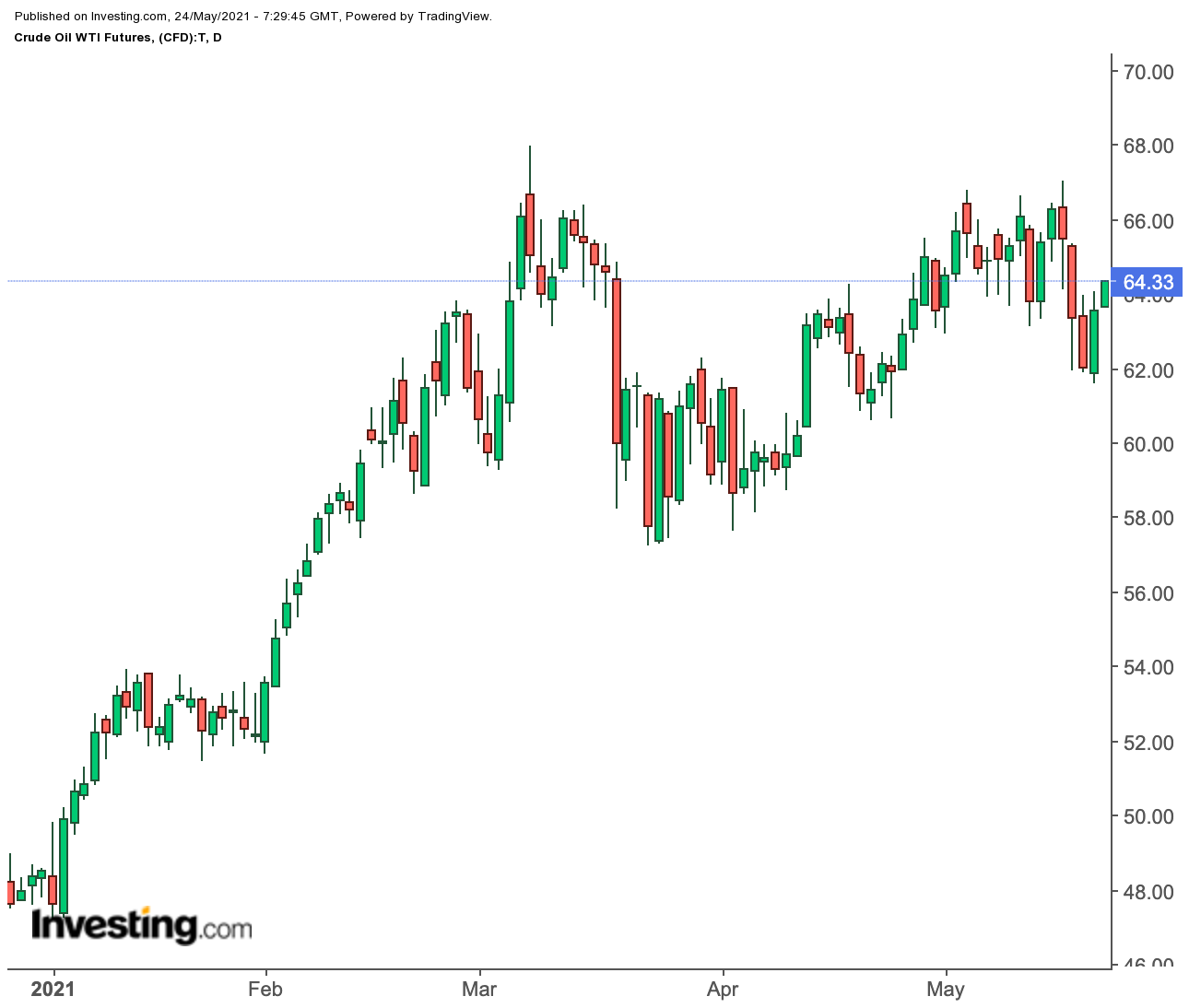 For crude bears, talks to draw Iran into a nuclear pact that allows it to export its oil without US sanctions will be the center of attention. The pact will likely multiply Tehran’s output in a world where there are still demand concerns as travel and activity are still significantly curbed by the COVID-19 pandemic.

Amid the push-and pull on oil, investors in will be warily watching US Treasury yields and the to see if they remain subdued despite soaring inflation concerns. Such an environment will give longs in the yellow metal another chance to attempt the $1,900 level that has eluded them over the past week. 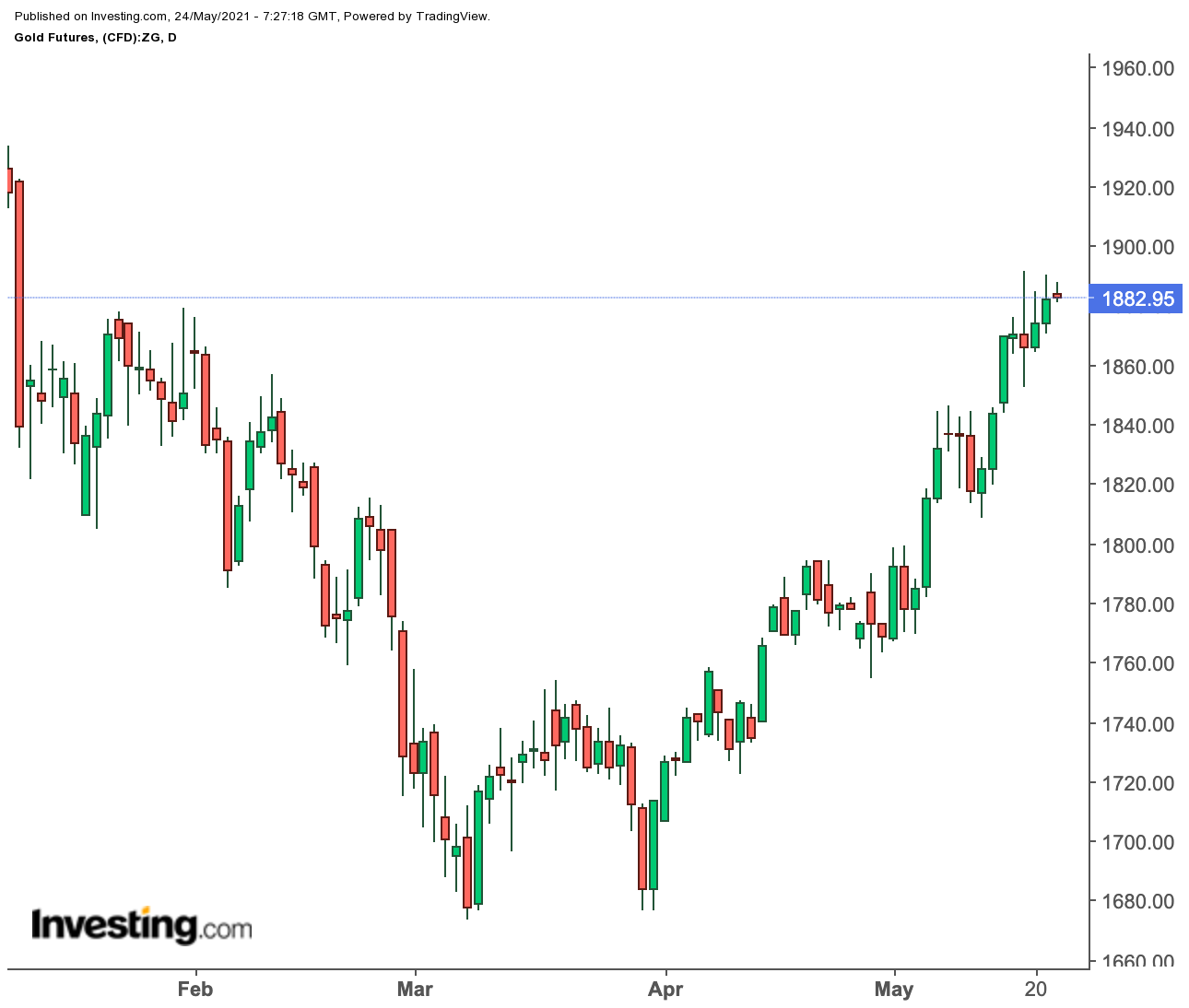 Should yields on the US  Treasury note—which are now at the lower 1.6% levels near the hazardous 1.7%, move higher—they could trigger risk-off across markets, including , said Tariq Zahir, managing member at Tyche Capital Advisors, a commodities fund in New York focused on oil, gold and other macro strategies.

“I think risk is still to the downside as yields could spike any moment,” Zahir said.

Wild swings in , which soured risk appetite last week, could also continue to create a drag on the broader market, at least for now.

Hurricane, US Road Trips Could Provide Tailwind For Crude

The gains came as the US National Hurricane Center warned that there was a 60% chance of a hurricane from a low pressure weather system over the western Gulf of Mexico, carrying winds of 30-35 miles per hour (48 to 56 km per hour) near and east of the center. Over 45% of total US petroleum refining capacity is located along the Gulf coast, as well as 51% of total US processing plant capacity.

Also supporting oil was speculation that Americans will fill up their tanks at least more than once this week for road trips stretching over the three-day long break into the May 31 Memorial Day holiday. The American Automobile Association expects as many as 37 million road travelers on this Memorial Day, up 60% from last year’s pandemic-suppressed 23 million.

On the Iranian nuclear talks, the speaker of Iran’s parliament said on Sunday a three-month monitoring deal between Tehran and the U.N. nuclear watchdog had expired and that its access to images from inside some Iranian nuclear sites would cease.

European diplomats said last week that failure to agree to an extension of the monitoring deal would plunge indirect talks between Washington and Tehran on reviving the 2015 Iran nuclear deal into crisis. Those talks are due to resume in Vienna this week.

However, Bloomberg reported that Iran is likely to extend a U.N. nuclear inspections agreement, buying diplomats time to revive the landmark deal.

The Biden administration has been selective in enforcing the Trump-era sanctions on Iranian oil, allowing Tehran to ship thousands of barrels per day to select buyers despite the US embargo. What’s really important to Iran now is the restoration of international banking arrangements, barred under the sanctions, that will allow the Islamic Republic to transact its crude cargoes without hindrance.

If the sanctions are indeed lifted, it could result in an additional supply of some 500,000 to 2 million barrels of Iranian crude that could reenter the world oil market anytime between the next three to 18 months, according to those in the know.

Iran has said previously that it could return “within months” to its peak oil production of nearly 4 million barrels a day once the sanctions on its oil are lifted. Sources familiar with the country’s crude output currently estimate its production at around 2 million barrels daily.

Analysts say the additional supply from Iran, whenever that comes, will force a reconfiguration of global oil supply that could be more bearish than bullish—especially with questions about demand resurfacing after new coronavirus flare-ups in India, the third largest oil consumer.

Gold’s aim for $1,900 will likely be influenced by a rash of US economic data this week, including that on and , which includes the PCE index. The so-called excludes food and energy, and is the Federal Reserve’s preferred inflation measure for its 2% flexible average target. It was up 1.8% in the 12 months to March.

The data could test the Fed’s resolve to keep up asset purchases at their current pace in the face of an economic and inflation rebound.

The Fed acknowledges the price pressures arising from bottlenecks in US supply chains struggling to cope with demand in an economy reopening after months of pandemic-suppression.

But the central bank insists that these inflationary pressures are “transitory” and will fade as the economy makes a full recovery from the pandemic. It also says it does not see the need for now to raise interest rates.

Such an environment heightens gold’s natural role as an inflation hedge, say longs who are emboldened to attempt first a return to $1,900 levels last seen in January, before a further push to record highs of around $2,100 set in August.

Both futures and spot prices of gold came less than $10 short of testing $1,900 on Friday, the second time they missed the target last week.

Fed Governor is also scheduled to speak about digital currencies at the virtual Consensus by CoinDesk Conference on Monday. Given the recent volatility in the cryptocurrency market, her comments will be closely watched.