After U.S. forces killed Iranian general Qassem Soleimani at the beginning of January and Tehran responded by raining rockets at U.S. airbases, traders were told to pick any number they thought was appropriate for how high crude prices could go. Now, they’re being asked to pick any low number that would be right for oil as the coronavirus crisis drags on.

Crude prices barely showed any life on Monday, even after a two-day technical meeting announced by OPEC and its allies to try and find ways to put a floor under the market. Few analysts saw a meaningful recovery in the immediate term for and , both of which slumped double-digits in January for their worst monthly losses in three quarters or more. 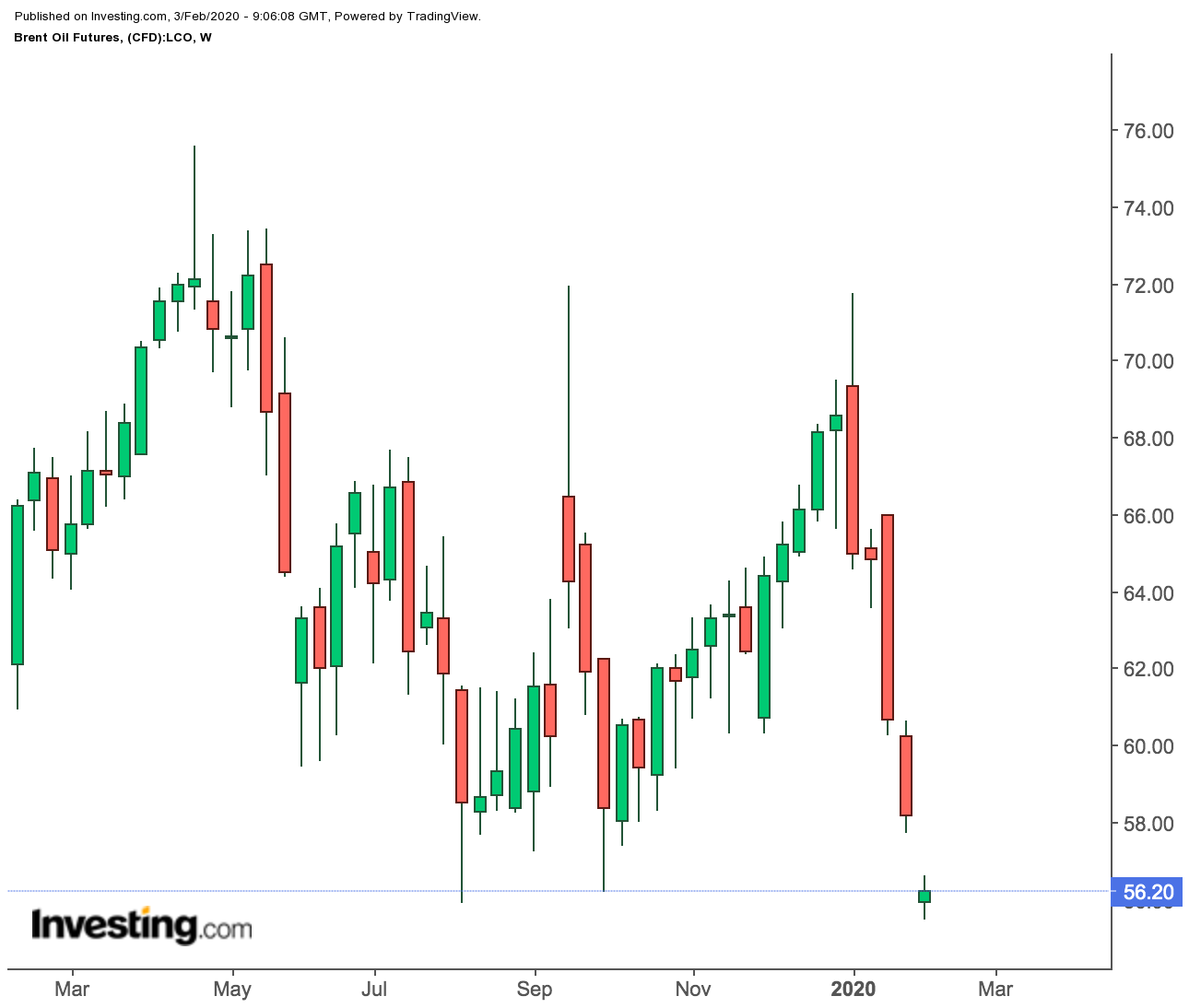 “Even before the outbreak of the coronavirus, global industrial activity was steadying at merely a sluggish pace,” Moody’s Analytics said in a note entitled “Coronavirus May Be a Black Swan Like No Other.” It added:

“If the unimaginable happens and a full-blown global pandemic occurs, the downside for industrial commodity prices is considerable.”

According to Moody’s, simply getting the monthly averages for crude down to the lows of the 2015-2016 profits recession would “sink the price of WTI by 43% from their recent readings.”

A chart it published showed an extreme case of below $40 a barrel under that possibility. In Monday’s afternoon trade in Asia, WTI was less than $1 from breaking below the key $50 support. 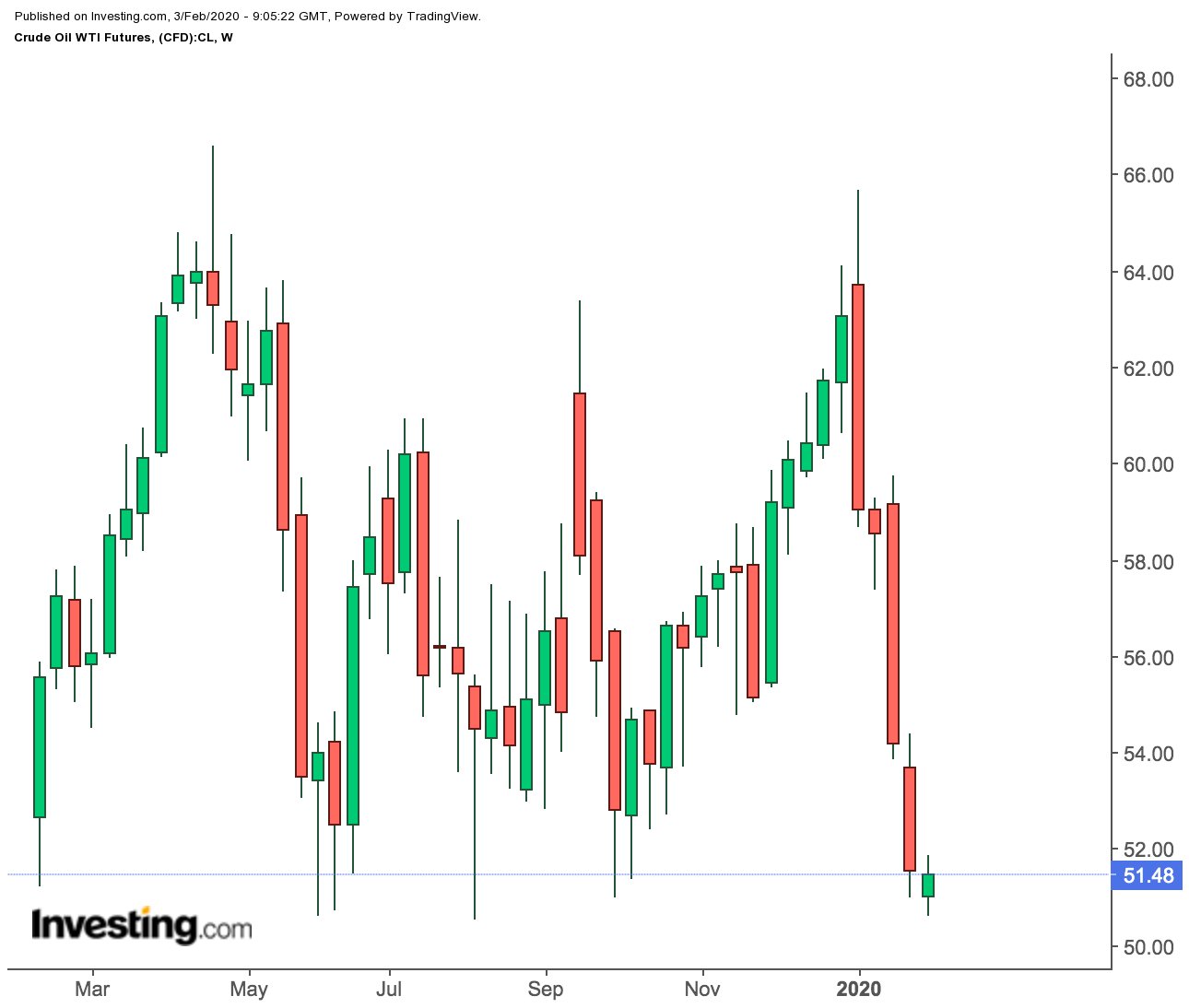 China’s and commodity markets fell heavily at the open on Monday, in the first trading session after an extended Lunar New Year break, as the month-long coronavirus outbreak that began in the central city of Wuhan killed more than 360 people and infected over 17,000, with no end in sight.

China Capital Injections Not Helping Much

The slump came despite assurance by China’s central bank that it will inject 1.2 trillion yuan ($174 billion) worth of liquidity into the markets to shore up sentiment.

Goldman Sachs, in an energy investment note issued Sunday, said that from meetings it held with generalist investors on the West Coast last week, “there appears to be little interest in positioning more positively for improved macro setup in 2021-22.”

The doom and gloom aside, the problem with the coronavirus crisis seems to be the difficulty for anyone to accurately quantify what could happen in the coming days, weeks or even months. So far, the best of the Wall Street banks and research houses have only been able to make educated guesses.

Sanford C. Bernstein & Co. says oil could fall to around $50 a barrel without OPEC intervention. It has trimmed its gasoline demand forecast by 50,000 barrels a day, and cut its diesel consumption estimate by 40,000 barrels a day

Flight cancellations could cause the loss of 400,000 to 700,000 barrels a day of jet fuel demand in the first quarter, while diesel demand weakness could lead to refinery run cuts, Morgan Stanley said

S&P Global Platts, in a worst-case scenario, says global oil demand will drop by a “massive and almost catastrophic” 2.6 million barrels a day in February and 2 million in March. For jet fuel, this could mean a 1 million barrel a day demand drop next month, it added.

In just four weeks, the coronavirus has undone what the Organization of the Petroleum Exporting Countries took more than a year to build. OPEC bore down on its most errant members — Iraq, Libya and Nigeria — to achieve compliance on cuts pledged over the past 18 months.

The cartel stayed focused on its messaging, despite tweets by Donald Trump aimed at lowering high pump prices in 2018, which the U.S. president feared could cost his Republicans colleagues votes in midyear elections (rival Democrats won the House anyway).

Yet, nothing OPEC had done over the past year and a half could have prepared it for the crisis at hand. The coronavirus has practically sapped every ounce of confidence from the market and left in its place nothing but fear.

It’s shaken the foundation of the bullish platform that took Brent to above $86 in October 2018 — its highest since the $100 per barrel days of 2013 — and again to a peak above $71 this year, after the volatility in recent months. Now, all traders can think of is how much lower can the market can go, because the virus itself isn’t going away.

So, what’s the scenario for gold then?

As everyone’s favorite hedge to the virus epidemic — other than U.S. Treasuries and the , of course — gold seems logically poised to build steady momentum toward a return to the seven-year highs above $1,600 an ounce hit in early January, after the Soleimani killing.

Yet in Monday’s Asian trade, both and of the yellow metal were down, reflecting once again their volatility in recent weeks despite the risk aversion across markets.

Some have been disappointed with gold’s performance of late. However, analysts at Capital Economics said the safe-haven would have nowhere to go but up, so long as the epidemic continues widening:

“There is scope for gold to rise much further if the Wuhan virus is not contained in the coming weeks. Indeed, if factory closures are further extended across mainland China, there could be a global economic fallout, which would be supportive of the gold price,”

A fearsome time for Democrats