The start of the long-awaited nuclear talks that could lift the US sanctions on Iranian oil will undoubtedly have some negative impact on crude prices this week. But that won’t be the only reason for another round of whipsaw volatility in energy markets, if we were to experience one.

No, oil this week will likely be exhibiting that classic market reflex called “buy the rumor, sell the fact.” 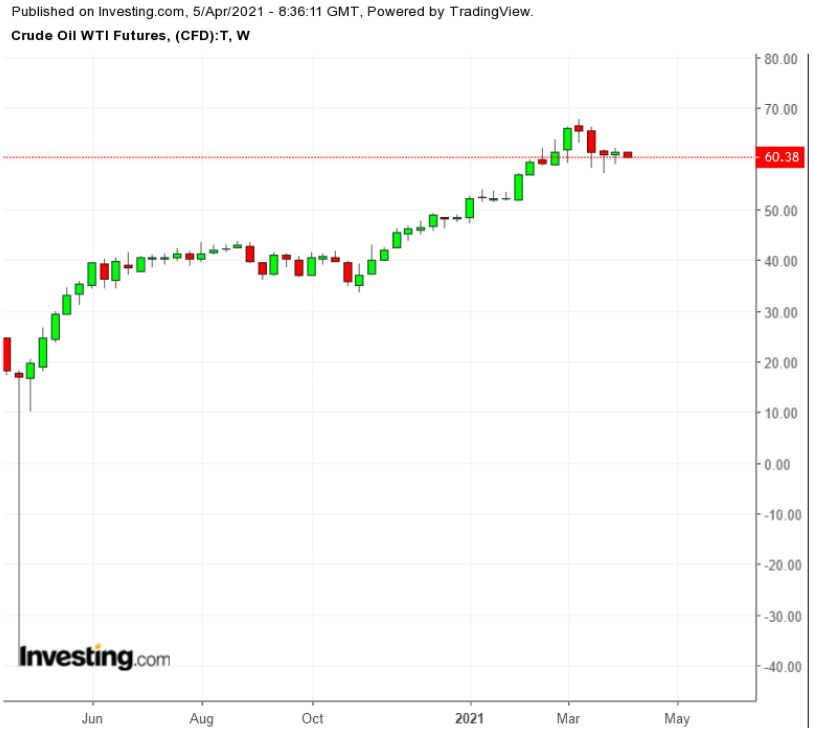 On Thursday, the for US crude jumped almost 4% while the UK’s rose 2% as traders bought into OPEC+’s narrative that there’ll be enough oil demand this summer for the producer alliance to hike output.

After one year of output cuts, the 23-member OPEC+—comprising the original 13 members of the Saudi-led Organization of the Petroleum Exporting Countries and 10 other oil producing nations steered by Russia—will pump an additional 350,000 barrels per day in May and June, and a further 400,000 daily in July.

Despite Thursday’s oil price rally, the market’s optimism over the production numbers released by OPEC+ dwindled as trading resumed on Monday after the Good Friday holiday.

Oil prices retreated as the UK variant of the COVID-19 continued to scorch parts of Europe—with Poland experiencing 60 times more cases than a year ago—and India seeing a record of more than 100,000 infections daily. Europe as a region is one of the single largest consumers of oil while India itself is the third largest crude buyer.

Concerns over the renewed COVID-19 wave in these centers could force those long oil to pare or drop their positions while new shorts are built simultaneously by oil bears. That will effectively lead to the “sell” of the “demand rumor” that took the market up earlier.

While the OPEC+ decision to raise production was seen as prudent on Thursday, by Monday it was being viewed with a different lens due to stubborn coronavirus situations outside the United States, said Jeffrey Halley, co-head of market analysis for Asia-Pacific at online broker OANDA.

Representatives from China, Russia, France, Germany and Britain will, meanwhile, be holding talks with Iran in Vienna this week. Oddly, no US official will be at the meeting at Iran’s insistence, although the discussions are to restore Tehran’s 2015 nuclear agreement with world powers, including the United States, and remove the sanctions on its oil, put in place by former US President Donald Trump.

The negotiators believe they can have a deal in two months that will stop Iran from advancing toward a nuclear bomb. But the talks can also drag.

The estranged Iran-U.S. relationship was already complicated, before Tehran came up with the demand that all sanctions against it be dropped to stop the progress of its nuclear program. The White House, now under President Joseph Biden, wants the exact opposite to happen before a deal can be done.

Eurasia analyst Henry Rome said beyond an agreement that could take three months to sign, “nuclear compliance (itself) could take as long as three months” to be verified by all parties concerned before the sanctions are lifted.

For Iran to make a legitimate return to the oil market and ramp its production to full steam, may take till early 2022, said Rome.

Iran Poses More Than One Problem For Oil Bulls

The problem for oil bulls, however, is that this doesn’t complete the picture on Iran. The sanctions are only the official impediment in Iran’s way of exporting its oil.

In reality, Tehran has for some time violated Trump’s prohibitions by secretly selling its oil to China. Since Biden came to office in January, it has become bolder with those violations, as the president doesn’t appear keen to enforce the policies of his predecessor.

The removal of the sanctions will provide Iran the opportunity to do a full court press of its oil, which it will, otherwise, continue adding to the market—on top of the OPEC+ supply hike that will hit the market from May. That what’s really worrying oil traders.

Energy research company Kpler estimated that last month alone, Iran exported 478,000 barrels daily on the average to China, and this should increase to 1 million in March. Some analysts believe that once sanctions are removed, within months, Iran can reach its previous peak production of nearly 4.0 million barrels per day, from its current 2 million plus—despite the more conservative estimates of Eurasia’s Rome.

“The OPEC+ decision, perhaps nudged along by increasing Iranian production heading to China, probably means we have seen the best of the oil rally now for the next few months.”

Still, oil prices could jump again if traders revisit last week’s strong themes that include the blockbuster US for March that created 916,000 jobs instead of the 660,000 expected. President Biden’s $2 trillion infrastructure relief plan, proposed on the heels of his just-approved $1.9 trillion COVID-19 stimulus, could be another big positive.

That could bring volatility back to oil, after the whipsaw moves of the past two weeks where WTI and Brent fell as much as 7% one day only to recover all of that back in the next session.

On the side of , the yellow metal will likely remain under intermittent pressure as it tries to break free of the $1,730 pricing range to get above $1,750 and build a pathway back to $1,800. 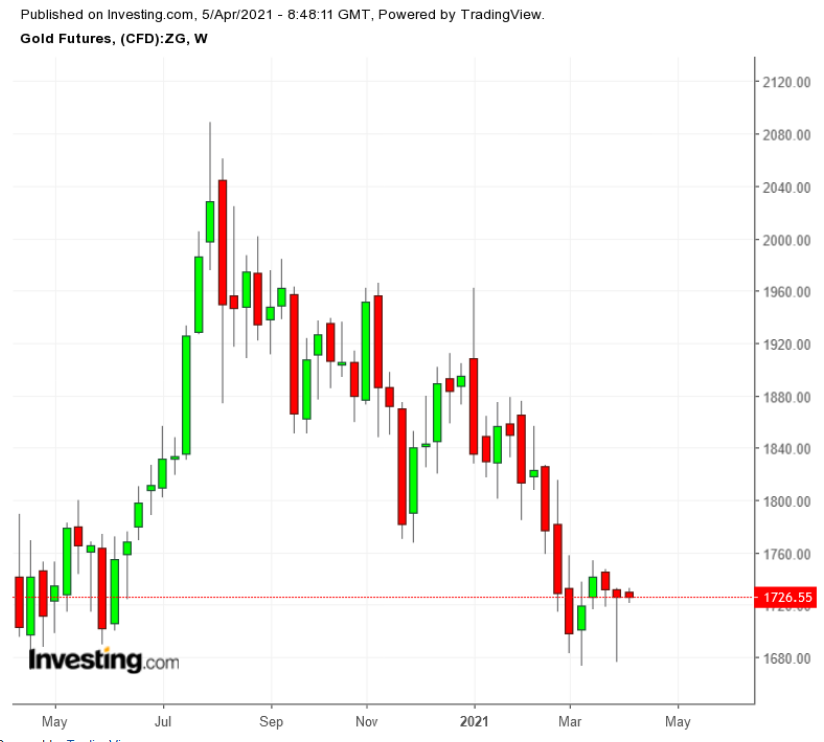 The return of the to the key bullish level of 93 and the resurgence of the U.S. to 1.70% highs will provide the main pressure for gold, especially after last week’s blowout number on US jobs.

Also likely impacting gold this week will be the IMF Spring meetings, the release of the Federal Reserve’s of its March meeting and the European Central Bank’s own latest .

Chart Of The Day: Palladium To Shoot ...