An early rise in oil and gold prices for the week presents a tricky proposition for investors as hopes over vaccines and therapeutics face off with potential stay-at-home orders amid ramping COVID-19 cases.

Crude prices rose more than 1% as hopes that OPEC+ will hold current output curbs offset concerns about weaker fuel demand as a result of a surge in coronavirus infections and higher Libyan production.

On gold’s end, prices of both futures and bullion climbed as investors sought a hedge to the fall in economic activity in countries and U.S. states where stricter safety standards were being imposed due to coronavirus increases.

Figures showing a in the world’s second and third largest economies, China and Japan, also supported oil in Monday’s Asian trade. Further boost came from data that Chinese refineries processed the most crude ever in October on a daily basis.

“The continuing outperformance by Asia economic data, hints that a recovery in consumption from the region will continue,” said Jeffrey Halley, Sydney-based analyst for New York’s OANDA.

“Although a hit to U.S. economic data from COVID-19 will occur, with Asia remaining on track, bearish pressures have ebbed.” 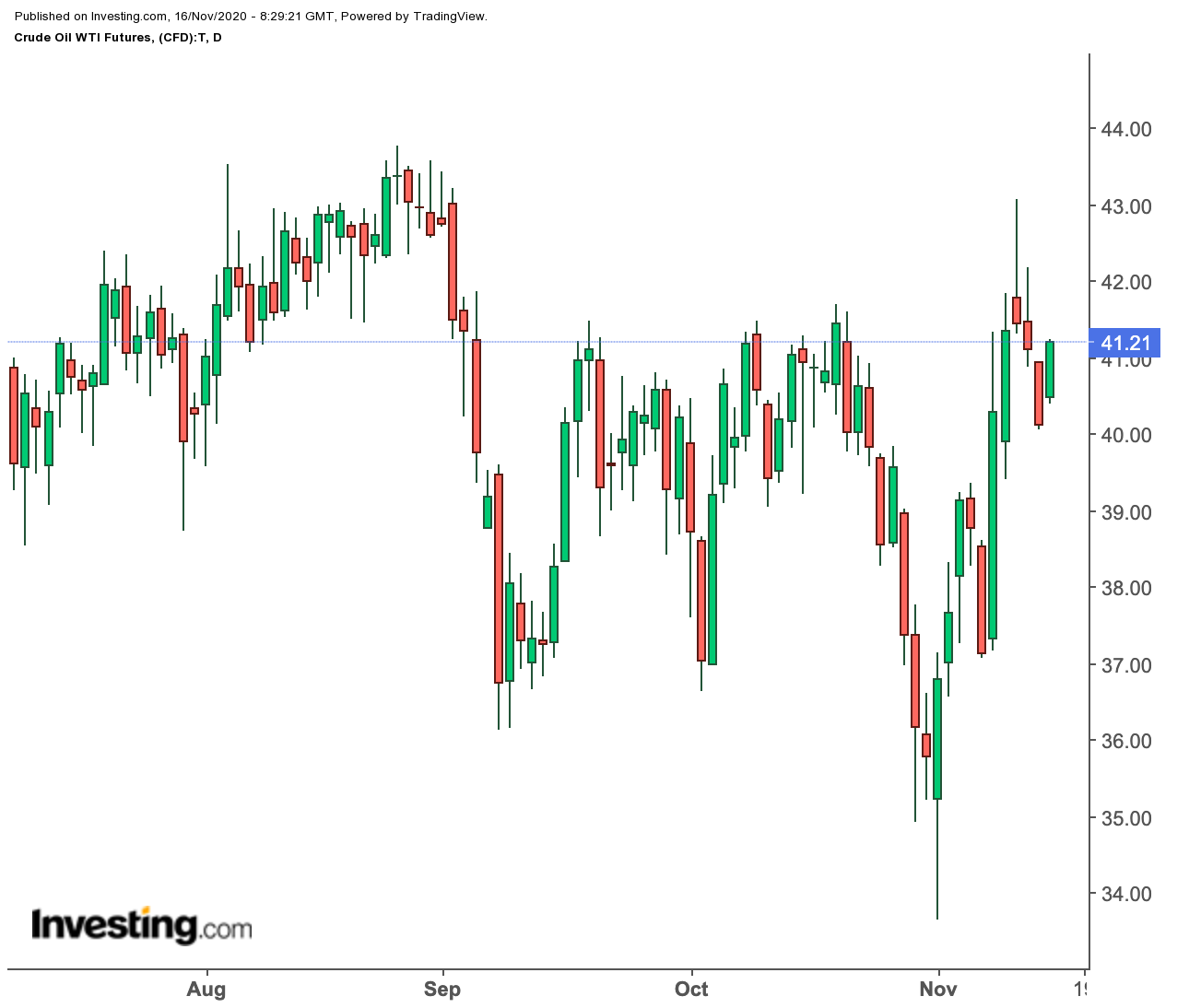 Both WTI and Brent gained over 8% last week as investor over-exuberance following the reported progress on Pfizer’s (NYSE:) COVID-19 vaccine trials triggered a massive rally in risk assets as the week opened.

But as the week wore on, the extremely challenging storage conditions for the Pfizer vaccine, as well as the difficult delivery logistics became clearer, diminishing those gains. 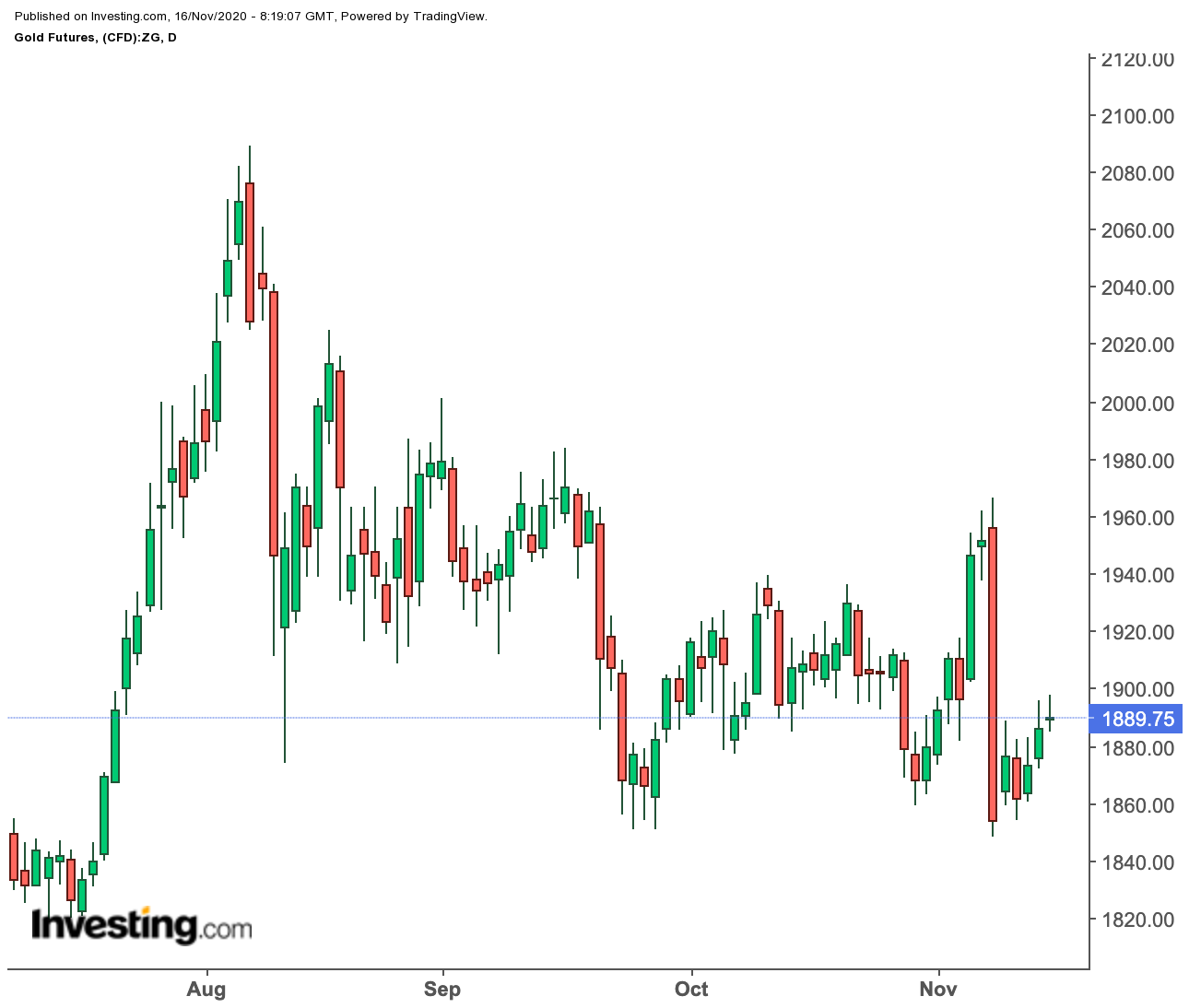 Futures of gold plunged more than $100 an ounce, or 4.5%, on Monday—the worst one-day plunge since August. By Friday though, the safe haven had recovered some of its losses, acting as a hedge against ramping COVID-19 cases.

A major U.S. lockdown similar to the March-May period may be inevitable if enough state governors decide to shut down territories under their jurisdiction to curb the spread of the virus, even if the Trump administration refuses to initiate such a move.

Fear of hospital ICUs being overrun reemerged this week as coronavirus infections set new daily record highs, breaching 184,000 cases on Friday. According to Johns Hopkins University, over have contracted the virus since February, and more than 246,000 have died from complications caused by it.

The possibility of a second national lockdown is quite real with President-elect Joseph Biden’s coronavirus task force advisor, Dr. Michael Osterholm, saying a four-to-six-week closure of businesses could help break back of the pandemic.

It’s not just the U.S. that’s facing economic curbs. In Europe, freeway operator Vinci reported on Friday that traffic fell by 48% in the first full week of November in response to the French government’s latest public health measures. The measures in Europe’s second-largest economy are set to stay in place until Dec. 1 at least. England is also in a state of lockdown, while German Chancellor Angela Merkel warned on Friday that her government’s recent restrictions on social gatherings may have to last through the new year.

All these could mean undue volatility in oil and gold.

Since U.S. crude’s breakout to 10-week highs above $43 on Wednesday, it has corrected some $3 per barrel lower.

In gold’s case, the swing between $1,850 and $1,900 an ounce could become a semi-permanent fixture—unless U.S. economic stimulus for the COVID-19 is passed in the New Year, becoming a boom for gold.

“There is fear of a second wave with lockdowns and restrictions and the market has to work through (some) stimulus” for the U.S. economy, said Eli Tesfaye, senior market strategist at RJO Futures. “So, the market at some point has to anticipate that cash and price in the potential inflation.”