It’s that time again. The release of the monthly . And the direction of , and a few other key commodities could well depend on how healthy the labor market in the world’s leading economy is.

It can be argued that every US jobs report holds markets hostage ’til its release.

But this report for July might be unusually important for three reasons: One, it will show how well America is hiring amid suspicion that government aid for the unemployed is keeping many from getting jobs; two, it will be a referendum on the US economy amid the resurgence of COVID cases from the Delta variant of the virus; and three, it will also demonstrate if the United States will assure the world of growth just as China’s economy was slacking.

China’s , released on Monday, showed activity expanded in July at the slowest pace in 17 months as higher raw material costs, equipment maintenance and extreme weather weighed on business activity.  The data added to concerns about a slowdown in the world’s second-biggest economy. 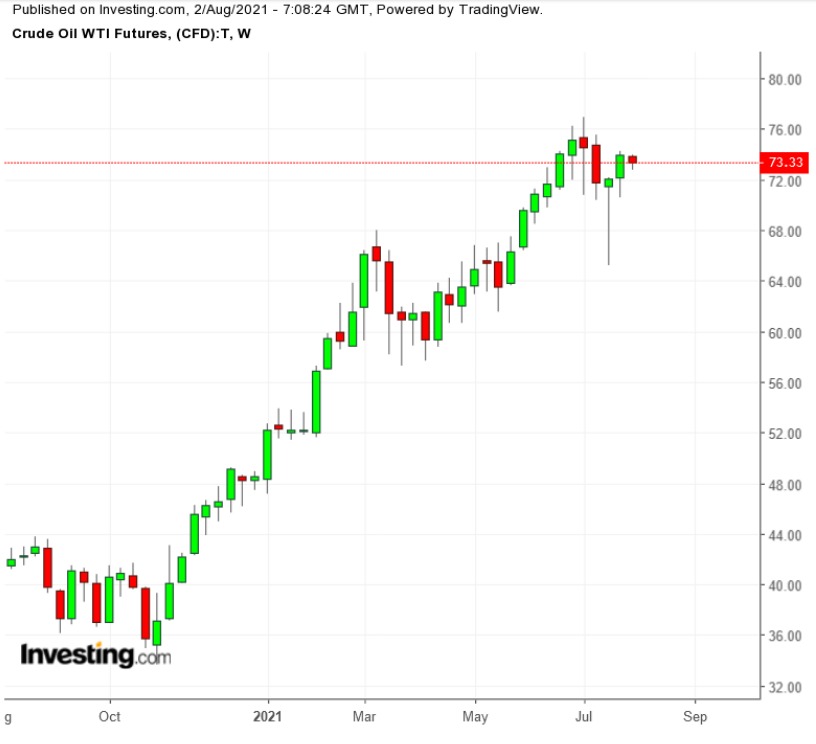 “China’s been leading economic recovery in Asia and if the pullback deepens, concerns will grow that the global outlook will see a significant decline.

“The crude demand outlook is on shaky ground and that probably will not improve until global vaccinations improve.”

New York-traded West Texas Intermediate crude and London’s were both down about 1% each in Monday’s afternoon trade in Asia, after posting modest gains for July, making it oil’s positive run to a fourth straight month.

Also weighing on oil was a Reuters survey that found production from the Organization of the Petroleum Exporting Countries hitting 16 month highs last month as the group further eased production curbs under a pact with its allies and top exporter Saudi Arabia.

While coronavirus cases continue to climb globally, analysts said higher vaccination rates would limit the need for the harsh lockdowns that gutted demand during the peak of the pandemic last year. The United States will not lock down again to curb COVID-19 but “things are going to get worse” as the Delta variant fuels a surge in cases, mostly among the unvaccinated, top US infectious disease expert Anthony Fauci said Sunday.

Hence, the importance of the July nonfarm payrolls report due Friday.

Economists are expecting the economy to have added 900,000 jobs in July after a forecast-beating 850,000 in June.

Last week Fed Chair Jerome Powell said the job market still had “some ground to cover” before it would be time to start scaling back stimulus measures the central bank enacted in the spring of 2020 to combat the economic fallout from the coronavirus pandemic.

In June Fed officials began debating how to wind down bond purchases, but there is no clear timetable yet for when it will begin pulling back emergency market support measures.

Oil aside, gold and will also likely be heavily influenced by the July payrolls report.

After two weeks of anemic action, gold longs got a break last week when Federal Reserve Chair Jerome Powell said the central bank wasn’t ready to raise US interest rates as it was still focused on buying assets to support an economy recovering from the coronavirus pandemic.

Powell also refused to discuss when the Fed might consider tapering the combined $120 billion it was plonking down each month into Treasury bonds and agency mortgage‑backed securities. His mantra: It wasn’t time for that. 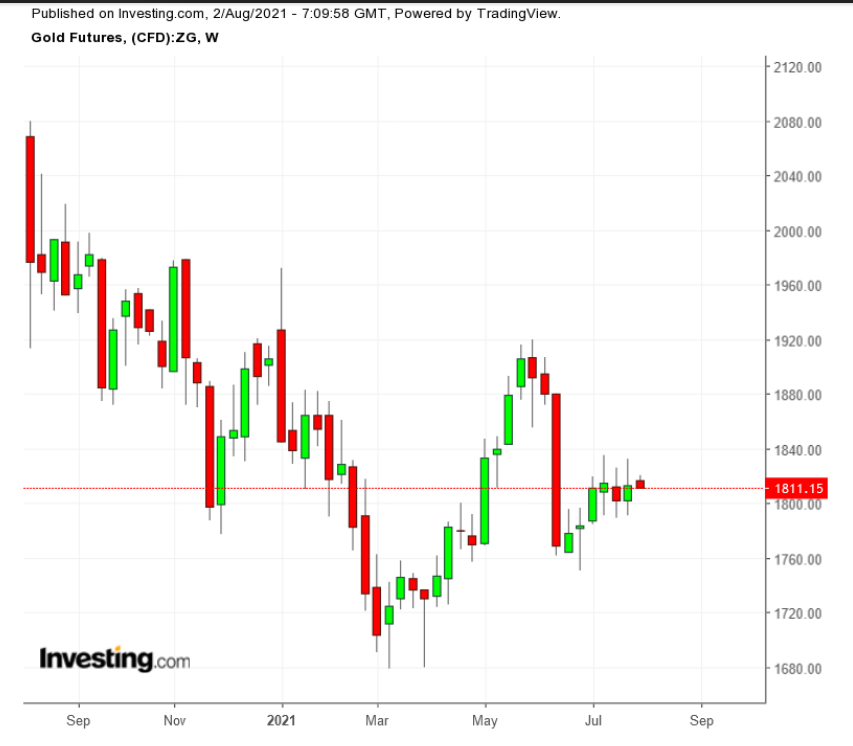 Front-month gold on New York’s Comex was down 0.2% in Monday’s afternoon trade in Asia, hovering at under $1,815 an ounce.

The risk, however, is US jobs showing a bigger-than-expected gain for July in the Labor Department’s monthly nonfarm payroll report due at the end of this week. If that overshoots forecasts, it could complicate the Fed’s aim of keeping the stimulus on for the foreseeable future and rates lower for longer. Gold might be caught in treacherous waters again if the job numbers surprise.

Aside from the jobs report, the economic calendar also features other important data including the Institute for Supply Management’s data Monday and data on Wednesday. The ISM manufacturing PMI is expected to remain robust, but to again underline supply side strains in the economy that are contributing to higher .

Data on is slated for Tuesday and the weekly report on is on Thursday. Jobless claims have fallen considerably since the start of the year amid growing labor demand, but the Delta variant that’s fueled a recent surge in new infections across the country poses a risk.