The divergent paths for energy and precious metals will likely deepen this week as bulls seek ever higher prices from the global energy crunch while could take more bashing from the Federal Reserve’s stimulus taper plans. 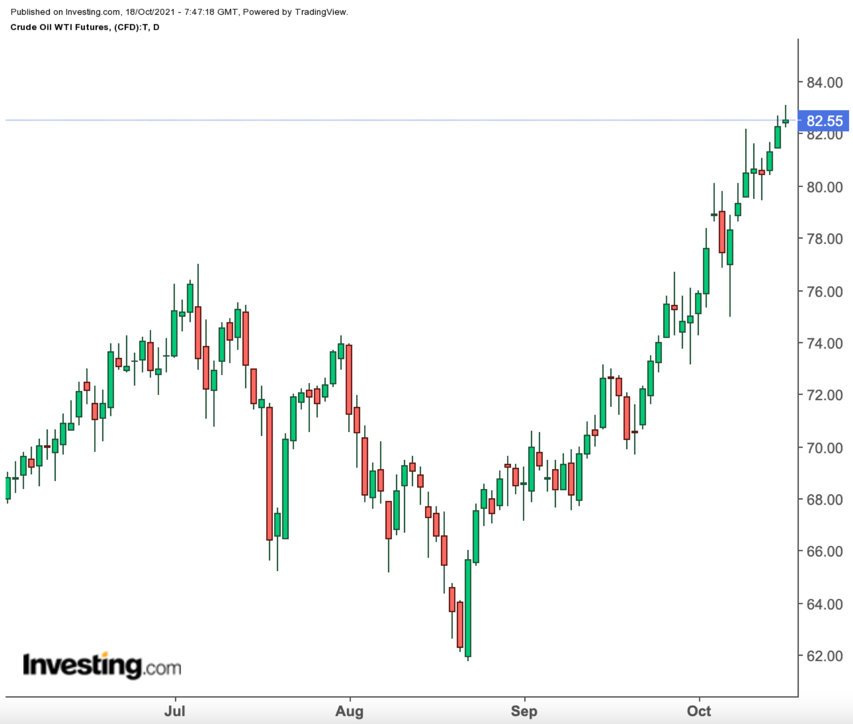 With the White House announcing on Friday that it will lift COVID travel restrictions for fully vaccinated foreign nationals from Nov. 8, the potential for jet fuel demand is on the boil. Even before that, the International Energy Agency had estimated a shortfall of at least 500,000 barrels per day in global oil supplies versus demand by the end of the year.

Crude prices have virtually become a one-way trade after the Organization of the Petroleum Exporting Countries and their allies (OPEC+) decided two weeks ago not to add more than 400,000 barrels per day in output despite much higher demand envisaged in a global economy rapidly reopening from COVID lockdowns.

While the White House’s planned lifting of travel restrictions into the US and the IEA’s upgrade of global demand estimates certainly have merits in pushing prices higher, oil also rallied this month on little more than the original OPEC+ announcement that has been recycled into a many-sided bull story, especially with inventories at multi-year lows.

From tales about the “scarcity premium” in the structure of crude futures, to the call for $90 Brent by both Goldman Sachs and Morgan Stanley, the market had been egged to even higher levels on the premise of explosive demand for mobility and heating in the coming months as the northern hemisphere winter looms.

No negative data has made a meaningful dent on the oil rally in recent weeks, including three straight weekly builds in US that have added about 13 million barrels in all.

Neither has the Energy Information Administration’s raising of US production estimates by 800,000 barrels daily over the past three weeks mattered, as total anticipated output remains at 11.4 million per day or 1.7 million below the pre-pandemic record of 13.1 million.

The crunch in Asian coal supply became the focus of investors instead, with a 9% surge in Hong Kong futures on Monday feeding into crude prices as China, the rest of Northern Asia and Europe competed for scarce energy supplies.

Brent, the London-traded global benchmark for oil, hit an opening week peak of $86.03, marking a three-year high that barely surprised some analysts already de-sensitized to the one-way trend in energy.

West Texas Intermediate crude, the benchmark for US crude, reached a new seven-year high of $83.11.

“WTI has now meaningful resistance until the $89 region, although I expect some sellers to appear above $86 a barrel initially. Only a fall through $82 a barrel changes the bullish outlook.”

Even crude releases from the Strategic Petroleum Reserve of China and the United States are “only likely to provide temporary relief” from prices in a market overbought by any technical measure, said Halley.

With gold, almost the exact opposite is likely to happen.

The yellow metal’s prices are projected to see further weakness after last week’s brief swing that took it above $1,800—only to collapse within 24 hours. 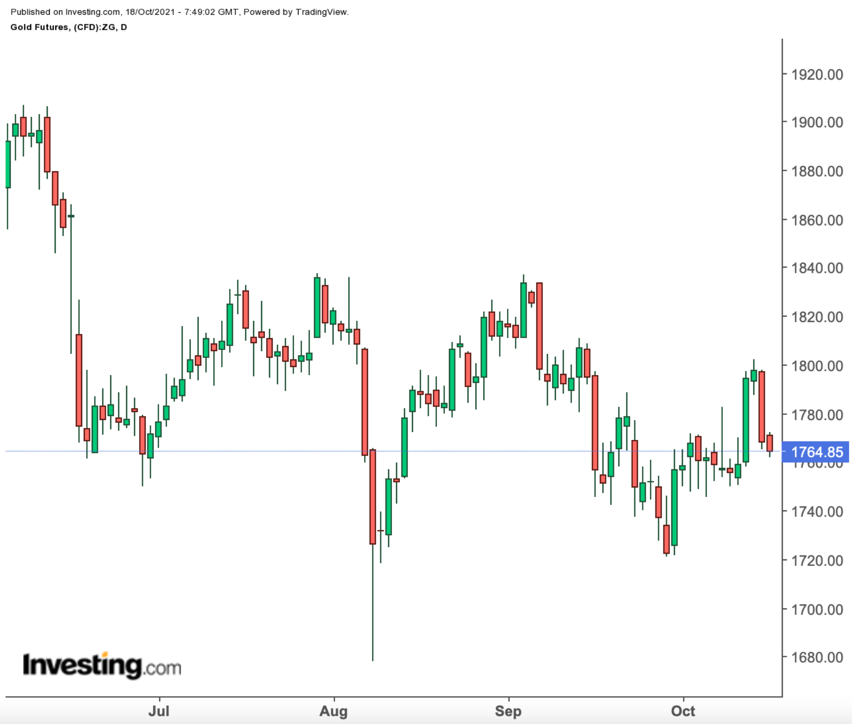 The Fed’s , due out on Wednesday, could cement expectations for tapering of the central bank’s monthly bond and other asset buying of $120 billion. Last week’s of the Fed’s September meeting showed that a November announcement is on the cards and tapering could even start later the same month.

On Monday data on US is due to be released followed by reports on and on Tuesday.

Industrial production is likely to be held back by supply chain problems, but housing data is expected to remain solid, with the recent uptick in mortgage applications pointing to a fresh pickup in activity after a slight slowdown through the spring and summer.

“Firmer US will be a headwind for gold rallies, especially if it leads to strength,” said Halley.

“In the bigger picture, only a rise through $1,835 an ounce, would trigger a multi-month inverse head-and-shoulders technical pattern and swing gold’s outlook back to positive. The risks remain firmly to the downside.”