Anticipation of an OPEC strike back against oil bears and intrigue over President Joseph Biden’s plans for Fed Chief Jerome Powell’s job could result in price swings in and this week, as markets operate on tighter schedules due to Thursday’s Thanksgiving holiday. 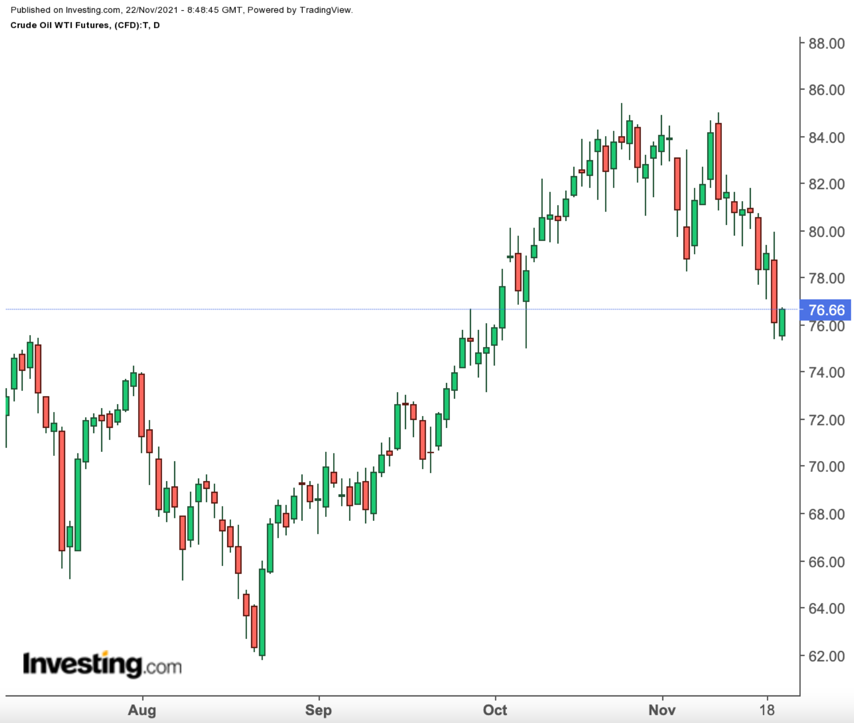 With crude already hitting an eight-week low in Monday’s Asian trading, either Saudi Energy Minister Abdulaziz bin Salman, who leads the 13-member OPEC bloc, or his Russian counterpart Alexander Novak, who guides nine other non-OPEC oil producers, is expected to issue some market-boosting remarks in the so-called ‘Holiday Week.’

The two are chair and co-chair of the OPEC+ alliance that has been responsible for using production cuts to bring oil prices up from pandemic lows of minus $40 per barrel to seven-year highs above $85.

WTI fell 5.8% last week, bringing its combined losses over the past four weeks to 9.3%, after an 18% rally over nine straight weeks. Just in mid-October, the US crude benchmark traded at a seven-year high of $85.41. Despite the slump of the past week, WTI remains up 57% on the year.

OPEC is facing a major challenge in restarting the oil rally, which took place over the past seven months, as the United States and other major oil consuming countries threaten to release emergency crude supplies in reserves to counter some of the cartel’s production cuts.

While the reserves held by major oil consumers, including China, India and Japan, are nowhere near to what OPEC+ produces, their first coordinated fightback against high oil prices has been spectacular enough to spook the market. Adding a greater bearish layer over oil are headlines of a new COVID lockdown in Austria and other mitigation efforts in Europe, including Germany, to contain a new explosion in coronavirus cases.

OPEC+ has a monthly meeting less than two weeks away, on Dec. 2. But there’s a good chance that the organization’s more bellicose officials will not want to wait till then, if they have an opportunity to say something now to staunch the market’s bleeding.

Aside from the Saudi and Russian energy ministers, there’s also the UAE’s Suhail al-Mazrouei and OPEC Secretary General, Mohammad Barkindo of Nigeria to talk up the market.

“If not anything else, the idea will be to counter the consumers’ narrative, that what they are doing can work,” John Kilduff, founding partner at energy hedge fund Again Capital.

“OPEC clearly wants the oil market to believe its narrative, not any other.”

Few oil bulls take the major consumers’ plan seriously, with many saying it won’t have a material impact on prices. Even fewer believe the threat to fight back OPEC will be carried out.

Japanese Prime Minister Kishida said at the weekend that Tokyo intended to support the US initiative so long as it is within legal means—an obvious reference to Japanese laws that specified that the country’s emergency crude supplies can only be used in cases of supply shortage, not as an aid against high prices.

OPEC+ could announce that it will freeze the 400,000 barrels per day increase it had pledged since the start of the second half—an offer it had barely fulfilled anyway. Next, OPEC+ could deepen production cuts, depending on how serious the coming wave of the pandemic is. These initiatives could restore a decent portion of the near $10 that crude lost from its mid-October highs.

But prices could still fall further before they rise, extending the market’s current path of least resistance.

To add to the grim mood in oil, ING, in a forecast carried by Bloomberg Markets on Monday, predicted that the market could return to surplus supply by 2020,

In fact, even before this week’s bearish turn OPEC had cautioned in its monthly report that it expected lower demand for crude in the fourth quarter.

The Paris-based International Energy Agency, which looks out for oil consumers, had concurred with that outlook, adding that US oil output was likely to be higher in the coming quarters.

Prescient or not, those early warnings could lay the groundwork for what OPEC+ is likely to announce in the coming weeks.

On the gold front, speculation over whether Biden will keep Powell as his Fed chief or welcome the central bank’s governor Lael Brainard to the job could be one of the key determinants of gold prices this week. 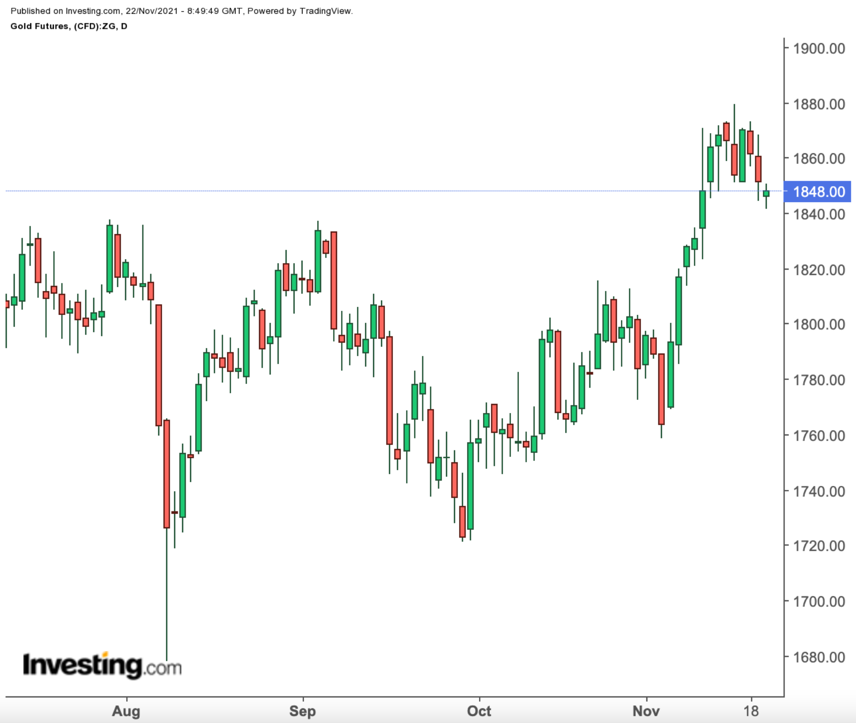 Powell signals continuity and a potential rate hike between the third and fourth quarters of next year. Brainard could bring on an even more pro-growth, easy monetary policy that could boost stocks and all other assets—while weakening gold.

The other thing for gold investors to look out for are the from its November meeting, in which policymakers decided the US economy was strong enough to start scaling back its pandemic-era asset purchase program, put in place to bolster the recovery. The minutes, due on Wednesday, could give a clearer idea of when the first rate hike will fall.