Commodities Week Ahead: Oil, Gold At Inflection Point After Correction

US crude stocks data will determine the direction for this week as both production and refining resume slowly in Texas and the Plains, after last week’s disruptive storms that pushed the market back beneath $60 a barrel. 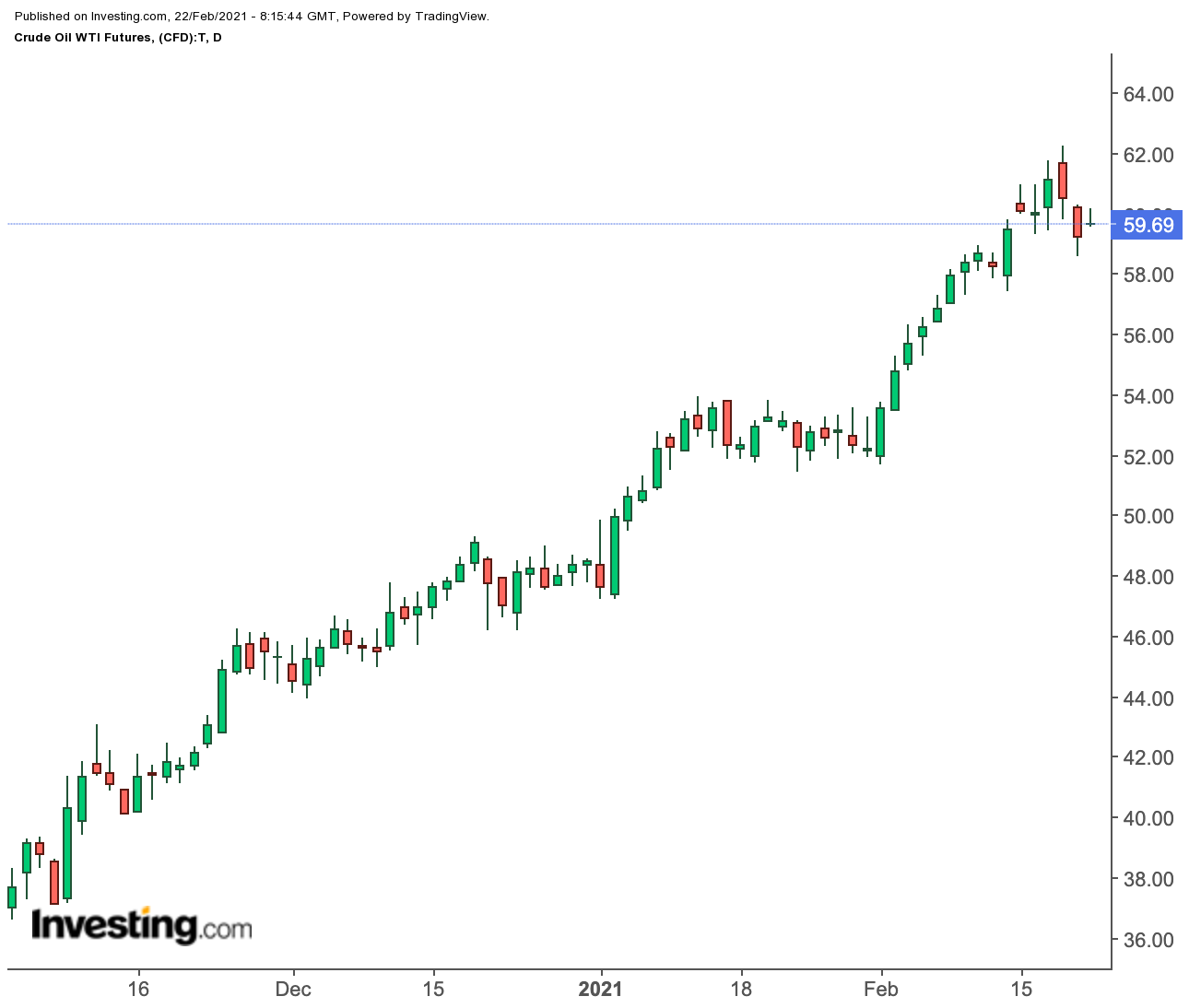 bulls will, meanwhile, be looking for a sweet spot between the high $2 and low $3 per mmBtu levels where they can hang their hat as the worst of February’s snow storms appear to be over—before new weather surprises arrive for March.

In precious metals, will likely be seeking to return to $1,800 an ounce—after last week’s collapse to June lows of beneath $1,760—as both the inflation hedging and technical support potential for the yellow metal broke down. 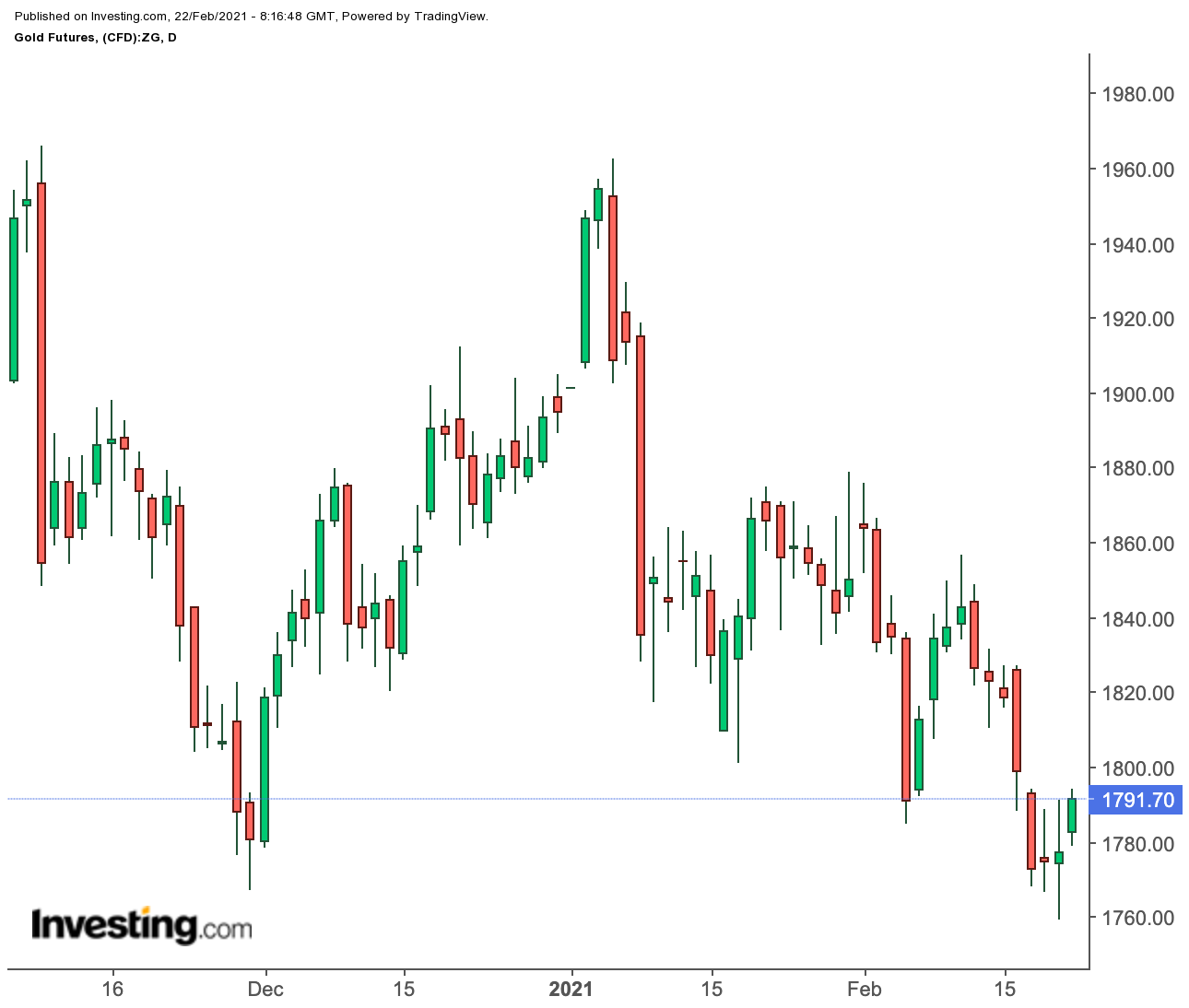 In metals too, is expected to find new multi-year breakout points above $4 per lb, continuing its powerful bull run of the past few weeks while also tries to catch a break on the upward side to resume the momentum through most of February. (We will run separate, more detailed, outlooks on copper and silver later this week)

On the macro front, some market divergences are likely in commodities after Friday’s steepening of the led to a modest bump up in the on Monday. There may be mixed fortunes for commodities if this continues, said analysts, including OANDA’s senior markets strategist for Asia, Jeffrey Halley.

Turning to oil, Halley said that while a softer dollar could help crude’s recovery, there were other factors weighing on US West Texas Intermediate and crude. He adds:

“The falls on Thursday and Friday have taken the pressure off the very overbought Relative Strength Index’s (RSI’s) on both contracts. That reprieve may be temporary though, with today’s rallies lifting them near overbought territory again. That likely means that although oil remains bid, neither Brent crude nor WTI are likely to recapture their recent highs of $65.50 and $62.80 a barrel this week.”

Week Ahead OPEC Meeting A Cause For Concern

Halley said attention will also turn to the OPEC+ technical meeting scheduled in the first week of March, where the global oil producing alliance had some big decisions to make.

“With oil futures heavily in backwardation, indicating higher prices to come, OPEC+ will need to decide on whether to increase production, least US shale quickly returns to seize market share. Early indications are Saudi Arabia and Russia have divergent opinions.”

Abnormally cold weather in Texas and the Plains states forced the shutdown of up to 4 million barrels per day of crude production along with 21 billion cubic feet of natural gas output, analysts estimate.

Oilfield crews will likely take several days to de-ice valves, restart systems and begin oil and gas output. US Gulf Coast refiners are assessing damage to facilities and may take up to three weeks to restore most of their operations, analysts said, with low water pressure, gas and power losses hampering restarts.

The slow production restart suggests crude prices will stay on the positive side this week after the 2% drop in WTI and the 1.6% slide in Brent, both on Friday.

Yet could pile up the first time in weeks if output staggers. That makes the weekly Wednesday inventory dataset from the Energy Information Administration all the more important for the market to watch.

Also, any recovery in crude prices could be capped by the potential return of the United States and Iran to the negotiation table to talk about lifting US sanctions on Iranian oil in exchange for Tehran giving up uranium enrichment ostensibly to build a nuclear bomb.

Iran, at its height of production before Trump’s sanctions, pumped as much 4 million bpd and exported at least half of that.

Analysts said the impact of Tehran’s production might be mitigated by output cuts by Saudi Arabia and other members and allies of the Organization of the Petroleum Exporting Countries.

But market jitters over the nuclear talks—whenever they begin—could still put a lid on oil’s three-month long rally.

On the natural gas front, warmer temperatures were paving the way for a thaw in Texas and other regions buried under mountains of snow, NatGasWeather said in an outlook that could weigh on a market already off from last week’s highs of $3.32. per mmBtu, or million metric British thermal units.

Rather than lows of minus 20 degrees, the mid-continental region to south east regions could see temperatures as high as the 30s this week, NatGasWeather said, suggesting less gas will be burned for heating.

“The worst of the coldest temperatures have passed as conditions gradually moderate in the days ahead.”

Gold Could Try To Return To $1,800 If Dollar Helpful

For gold, a weaker dollar will be a reprieve, facilitating a possible return to $1,800 or levels just under those, said analysts, including technical chartist Sunil Kumar Dixit of S.K. Dixit Charting in Kolkata, India.

Disclaimer: Barani Krishnan uses a range of views outside his own to bring diversity to his analysis of any market. As an analyst for Investing.com he presents divergent views and market variables.

Comments are welcome and encouraged. Inappropriate comments will be reported and removed.