Donald Trump insists he wants no war but the Iranians are in no mood to negotiate, hoping to force the U.S. president to drop sanctions unconditionally. That puts traders in a spot on how to navigate one of the trickiest times ever in oil despite just having its best week since 2016 with a 9% gain.

Gold may also consolidate at around $1,400 per ounce, awaiting clues on a much-anticipated Fed rate cut.

With the run-up to the OPEC and G20 meetings upon the oil markets, few traders might want to risk putting new shorts on crude this week. The Saudi-Russian partnership could yield new restraints on oil production at the July 1-2 OPEC summit. And Trump and his Chinese counterpart Xi Jinping might announce a preliminary trade deal before the G20 concludes in Osaka this week.

Yet, these being extraordinary times for oil traders means bulls have to be hedged for the most unexpected of events. And that includes potential for another surprise build in weekly crude data released by the U.S. Energy Information Administration, and possible wavering by Fed bankers on a rate cut now widely expected by July.

While the EIA cited record U.S. gasoline demand in its dataset last week, a fire on Friday at a Philadelphia refining complex that makes a quarter of the region’s fuel products could distort the near term numbers on energy due from the agency.

And then, there’s weak global margins for refining, particularly in Asia, that’s weighing down the worldwide outlook for crude.

New York-based consultancy Energy Intelligence listed the varying themes in oil on Friday, particularly negative perceptions on the global economy and how those were impacting crude prices.

The group said softening global GDP was intensifying market fears that oil demand “might fall off a cliff”. 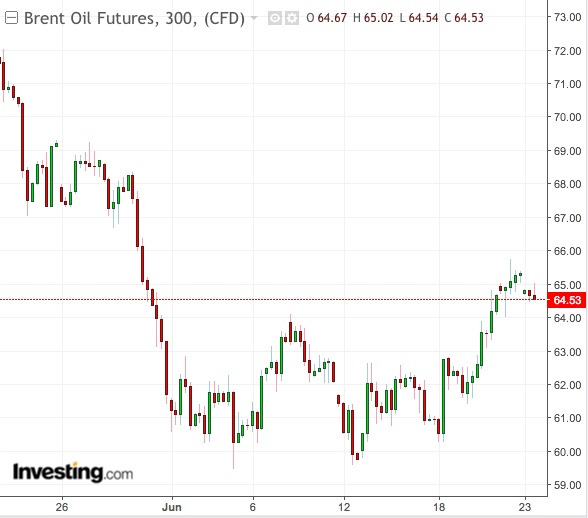 “It’s a big reason why benchmark Brent crude is selling down and not reacting to a myriad of supply worries. Some fear demand is already sinking beyond available data. As evidence, they point to rising refined product exports and depressed refinery margins in Asia.”

“The thinking is that demand growth will be revised down further, creating a crude surplus”, said Energy Intelligence, even if a sharp drop in global oil demand may not be entirely realistic.

‘Good Data’ Can Sometime Have ‘Bad Impact’ On Oil

That’s not all. In oil, “good data” can sometimes have “bad impact”.

Take, for instance, flash improvements in industrial production numbers or retail salesperformance that may convince the Fed to delay a rate cut in July. That could trip up oil funds counting on monetary easing by next month to prop up flagging global demand for crude.

Investing.com’s Fed Rate Monitor Tool prices in a 100% chance for downward adjustment in July. But with three Federal Reserve bankers—Chairman Jerome Powell, St. Louis Fed Chief James Bullard and Atlanta Fed President Raphael Bostic—speaking at various events this week, the field is wide open on the impact they can make on rate cut discussions. While Powell said there wasn’t much support among Fed bankers for a rate cut at the central bank’s June meeting last week, Bullard said he wanted one as insurance against slowing growth and weak inflation. 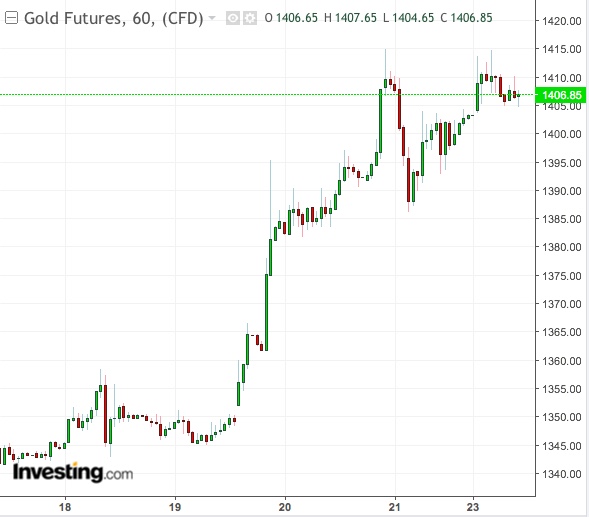 The Fed’s move will be key to gold too, where many are anticipating bullion and Comex futures to chart new peaks after last week’s near six-year highs above $1,400.

“Should August gold climb and sustain above $1,420, my work will point to $1,445 to 1,450 as a minimum next target zone thereafter,” said Mike Paulenoff, gold commentator at MPTrader.com.

“This will argue that its multi-year upside breakout will continue unabated, perhaps in reaction to the combination of an easier Fed, a weaker USD, rising inflationary expectations and heightened geopolitical tensions.”

‘Nice Or Tough Guy’, Trump Not Getting Through To The Iranians

Meanwhile, the Iran-U.S. face-off is as dilemmatic to oil traders as the expectations for a Fed rate cut.

Fewer tensions in the Middle East may be great for peace activists but not hedge fund managers betting on geopolitical risk to deliver $70 and above crude.

Trump asserted at the weekend that he was prepared to negotiate with Tehran, without preconditions, in a bid to ease tensions that have been building since he withdrew the U.S. from a global nuclear deal with Iran a year ago and pressured the Islamic Republic with economic sanctions. Iran has denied U.S. accusations that it engineered attacks on several oil tankers and energy assets in the Middle East over the past month, but owned up to shooting down a U.S. surveillance drone last week that almost resulted in a military response from Washington.

Trump has tried to play both “Nice Guy” and “Tough Guy” with Iran.

One of the warnings he shot to Tehran at the weekend was that unless the country came to the negotiating table, it may face obliteration “like never seen before”.

That may have worked with Mexico and China—but may not with a hardened regime that believes in its own doctrine more than anything else.

Thus, despite his varying overtures, there’s no sign that the president is getting through to the Iranians.

If anything, they seem to have become even bolder in fighting him after sensing that it’s in his best interests too not to let geopolitical tensions spike in the Middle East—that is if he wants oil to stay affordable to American voters amid his bid for re-election in 2020. By being Trump’s worst nightmare now, the Islamic Republic has unwittingly become oil bulls’ best friend.