Anticipation of summer demand, along with OPEC maneuvers, should keep prices on the boil this week, while tries to break into the higher $1,900s on inflation concerns as trading for June begins. 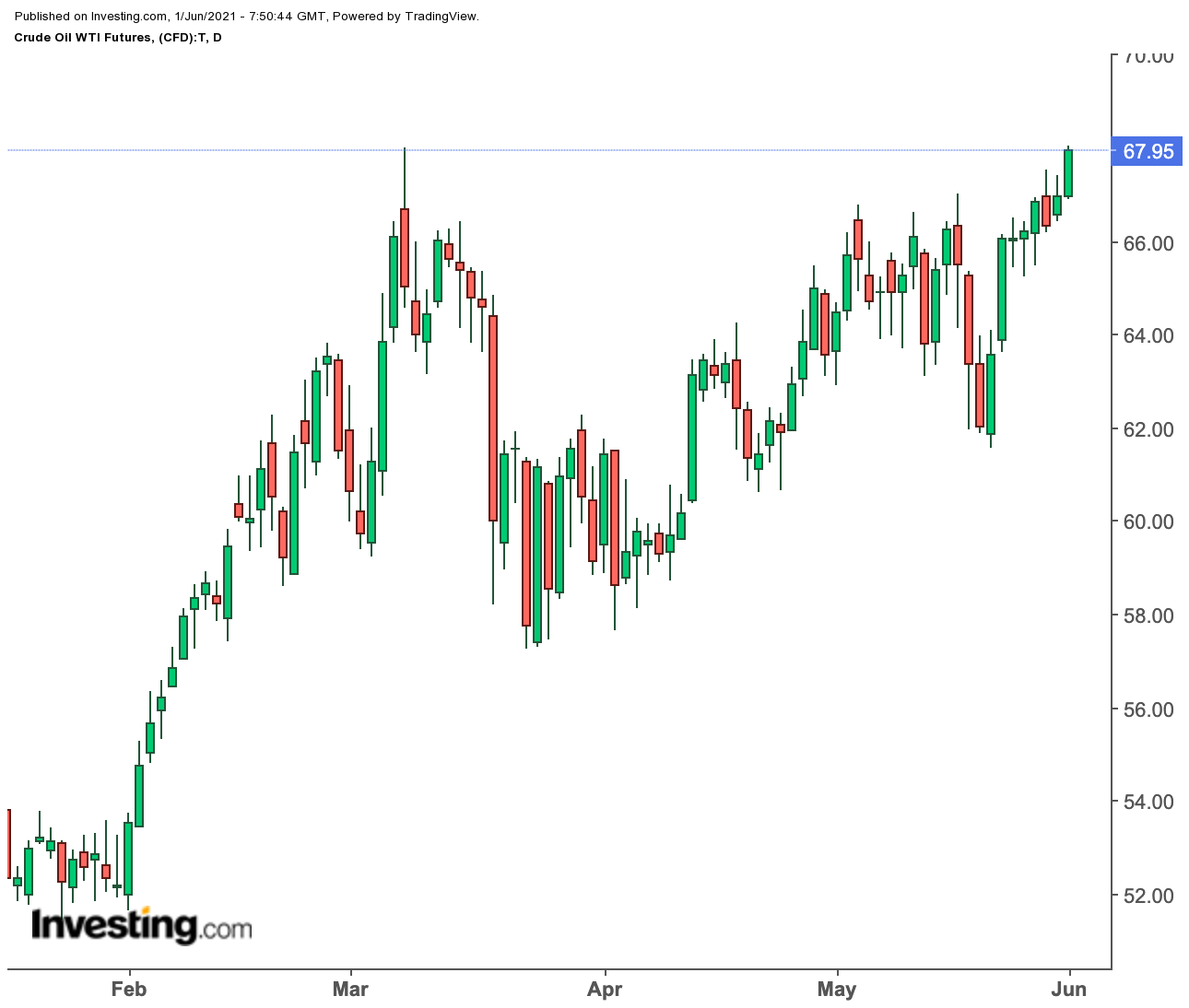 US demand jumped 9.6% above the average of the previous four Sundays, denoting the highest weekend demand since summer 2019, Gas Buddy, an app run by media group Oil Price Information Service said. The data came ahead of Monday’s Memorial Day holiday that traditionally flags the start of the peak summer driving period in the United States.

The global economic outlook is also improving as vaccine rollouts allow businesses to resume operations and as the United States pumps trillions of dollars into the world’s largest economy, the Organisation for Economic Cooperation and Development said, nudging its forecasts higher.

The global economy is set to grow 5.8% this year and 4.4% next year, the OECD, a club for some of the world’s richest countries, said, raising its estimates from 5.6% and 4.0% respectively in its last forecasts released in March.

On Tuesday, the 13-member Organization of the Petroleum Exporting Countries, known by their acronym OPEC, and their 10 non-member allies, who together form the OPEC+ alliance, are to hold talks on monthly supply-demand calibration. Typically, the cartel’s members and allies will do whatever it takes to keep oil prices and demand up through their mission statements and targets.

OPEC+ decided in April to raise production by 2.1 million barrels per day from May through July as it anticipated a rise in global demand for fuels despite COVID raging in India, the world’s third-largest oil consumer.

“We believe the market will be able to absorb this additional supply, and so would expect the group to confirm that they will increase output as planned over the next two months,” analysts at ING Economics said, referring to OPEC+.

West Texas Intermediate crude, the benchmark for US oil, rose almost 2% in Tuesday’s Asian trade, reaching a 12-week high of $67.70 per barrel at the session peak. Last week, WTI rose 4%.

Oil has rallied since last week as average pump prices of gasoline hit seven-year highs of more than $3 per gallon, or 60% above year-ago levels, ahead of the May 31 Memorial Day holiday.

Memorial Day unofficially marks the start of the peak US summer driving season and the American Automobile Association forecast as many as 37 million travelers for the occasion this year, up 60% from last year’s pandemic-suppressed number of 23 million. Those driving over the three-day stretch usually fill their tanks more than once, typically resulting in a boon for gasoline consumption.

Bets over Memorial Day consumption helped oil prices offset lingering concerns about a possible surfeit in supplies from Iran entering the market in the coming months, if Tehran succeeds in clinching a new nuclear deal with world powers that would lift US sanctions on its crude exports.

WTI and Brent were also supported by US government data showing stronger-than-expected drawdowns in , and stockpiles last week.

Separately, crude output in the United States soared 14.3% in March, the Energy Information Administration reported on Friday, as the number of in operation rose for a 10th month in a row last week.

Dollar-denominated commodities such as oil and gold also got a strong start to the week as the US currency continued to wilt in value. The , which pits the greenback against the and five other major currencies, has fallen some 4% since the end of March.

Gold sought a stronger hold into $1,900 territory as it hit five-month highs in both futures and trading of bullion.

Last week, longs in the yellow metal wrapped up their best month in ten as May delivered an 8.0% positive return—the highest since July’s 10% gain.

Much of May’s action in gold was predicated by data on inflation, which has partly fanned the rally in the metal.

Inflation data over the past few months have rattled economists who fear that 2021 could see the biggest price spike in 35 years as the cost of almost everything, from houses to the that goes into building them, soared.

Treasury Secretary Janet Yellen said last week the spike in US inflation from a year ago is likely a temporary phenomenon caused by materials shortage in an economy rebounding from the COVID-19, and high annualized numbers could persist each month until the year end.

All things being equal, a higher inflationary environment is good for gold, which is seen as the best store of value in times of both financial and political trouble.

Yet in recent months, gold’s rivals, the dollar and , have rallied instead on signs of ramping inflation, as investors bet the Fed will hike rates faster than anticipated—something the central bank has sworn against. Such speculation triggered sell-offs in gold that sent it to a near 11-month bottom of under $1,674, before a retreat in yields and the dollar helped the yellow metal claw its way back to $1,900.

The Fed acknowledges the price pressures arising from bottlenecks in US supply chains. The central bank has targeted an annual inflation of 2% over the past decade.  But it has barely met that goal, with critics attributing the mismatch to the central bank’s dogged following of the Personal Consumption Expenditure, or , index—a tame indicator stripped of food and energy costs, the most volatile components of inflation.

On the other hand, the Consumer Price Index, or , which includes food and energy components, registered a 4.2% growth in April for its largest increase in almost 13 years amid soaring costs in an economy rapidly recovering from the coronavirus pandemic.

Gold’s sustenance above $1,900 will also be influenced by the for May, scheduled for release on Friday. Economists are expecting some 650,000 job additions for last month versus the rise of just 266,000 in April. 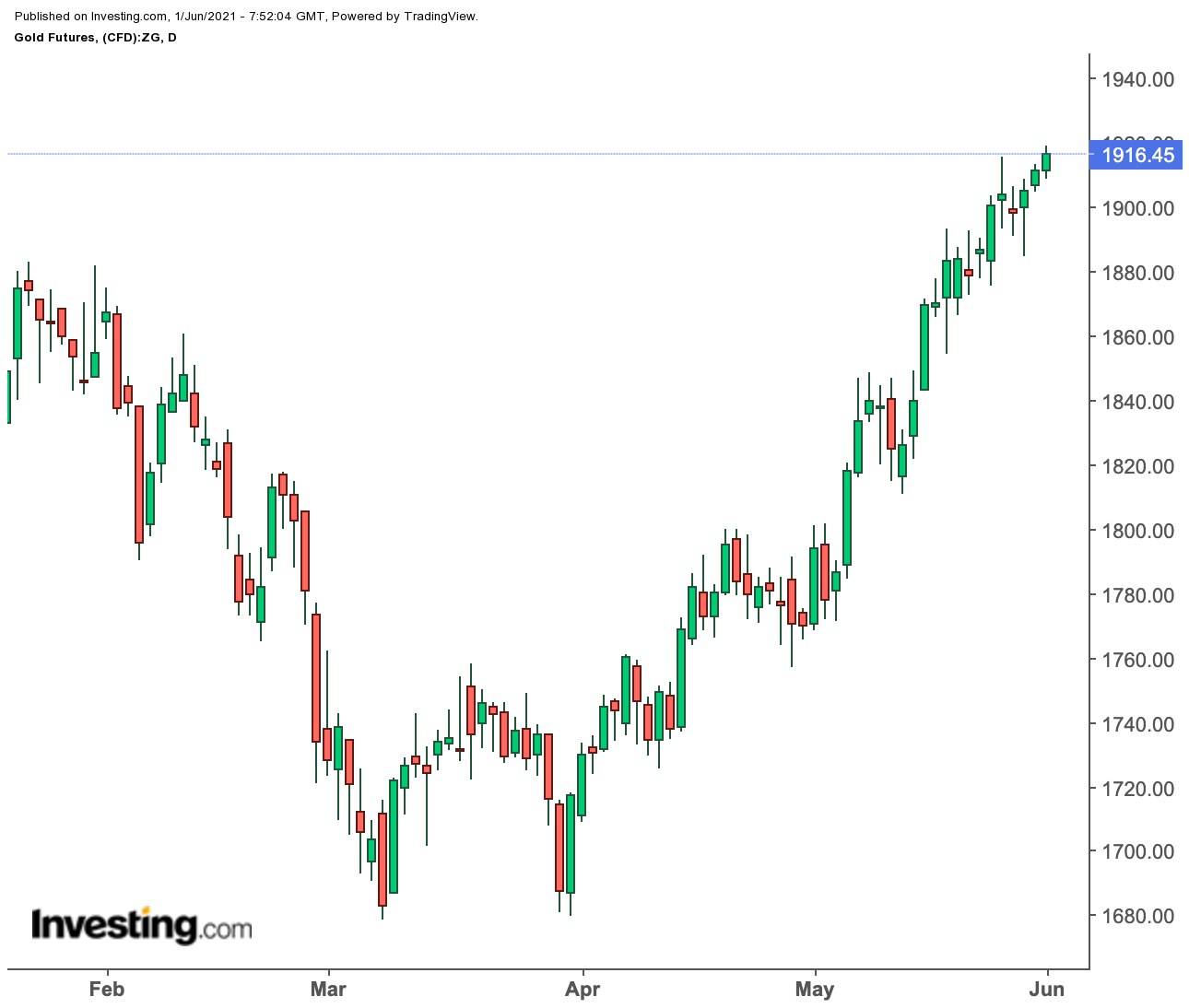 Economists generally are expecting strong US jobs growth in the months to come, as normalcy rapidly returns to a country under pandemic suppression .

The jobs data aside, data, scheduled for release on Tuesday, followed by data on Thursday could also be pivotal for gold.

That aside, data is due on Thursday, one day later than usual due to Monday’s holiday, along with the weekly figures on .

On the Fed’s side, several officials of the central bank are scheduled to speak this week, including Chair who joins a panel discussion on climate change on Friday with International Monetary Fund chief Kristalina Georgieva and European Central Bank President .