Will this be the week that West Texas Intermediate returns below $50 and snaps $60 support?

It will be both unsurprising and fascinating were that to happen.

broke below $55 per barrel last week, making $50 the next logical test. The U.K. benchmark, meanwhile, came just 56 cents short of leaving $60 territory on Friday. So, it will not be surprising to see them make new lows this week. 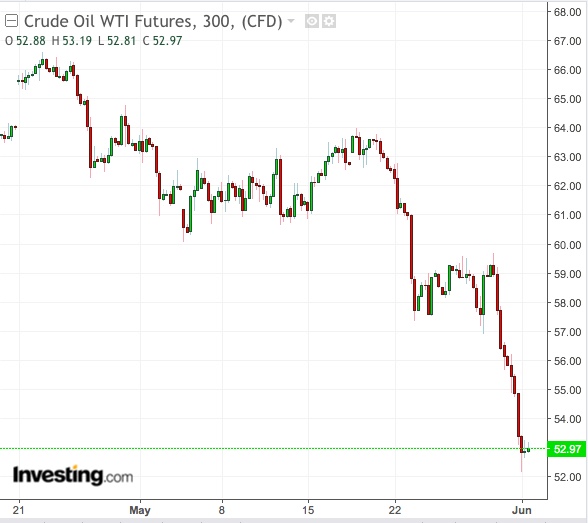 Yet it’ll be fascinating if the market indeed gets to such bottom. That’s because less than two months ago, WTI hit a 2019 high of $66.60 and Brent peaked at the year’s high of $75.60. Those highs came on the gush of OPEC-engineered production cuts and U.S. sanctions on Venezuelan and Iranian oil exports that gave crude gains of as much as 40% on the year.

Now, of course, all that positivity has vanished. In its place is gloom and doom caused by a dramatic escalation in the U.S.-China trade war and unexpected tariffs on Mexico by U.S. President Donald Trump.

While OPEC could announce deeper production cuts at its mid-year meeting to try and shore up the market again, the cartel’s dominant member Saudi Arabia seems to be having trouble convincing its main non-member ally Russia to contribute meaningfully to the plan, Bloomberg oil columnist Julian Lee said.

Lee said on Monday about OPEC:

“The group needs to show competence and unity of purpose if it really wants to put a lower limit on oil prices. Right now it seems they would struggle to organize a bun-fight in a bakery, even if they could decide when to hold it.”

Dominick Chirichella, director of risk and trading at the Energy Management Institute in New York, said the potential slowing of the global economy had been the narrative for oil over the last month, offsetting the OPEC cuts and geopolitical risk.

“Most risk asset markets have been hit hard with the U.S. equity complex declining for the last five weeks in a row, putting a negative atmosphere over the oil complex as well as the broader commodity complex.”

While “sell in May and go away” is a proven stock market adage, the for U.S. stocks fell just 6% last month versus WTI’s loss of 16% and Brent’s drop of 11%.

There was no reprieve in oil’s slide on Monday, with WTI less than $3 from returning to $40 levels. Brent, on its part, was less than $2 from making it to under $50.

On a more crucial technical level, both benchmarks broke below all key moving-day averages, collapsing from the 200-DMA to under the 5-DMA. By dollar value alone, oil has lost more than $14 on a barrel from a $24 gain accumulated since the Christmas Eve lows of last year, its bottom during the 2018 selloff. That’s a loss of nearly 60%.

And it’s not just trade wars that are pulling oil lower. Demand for crude has also been far from impressive.

U.S. crude oil inventories decreased by just 0.28 million barrels in the week to May 24, compared to a forecast draw of 0.86 million barrels, data showed. In the two previous weeks, there were back-to-back builds of around 5.0 million barrels.

Oil bulls typically count on strong refinery runs and heavy gasoline consumption in the run-up the summer. But refiners have been slow to draw down crude in the run-up to this summer as profit margins for producing gasoline were running about 30% below year-ago levels.

Goldman Sachs (NYSE:) (NYSE:GS) noted among other things that “weaker activity indicators have finally caught up with oil market sentiment”.

“The magnitude and velocity of the move lower were further exacerbated by growing concerns over strong U.S. production growth and rising inventories.”

The U.S. Energy Information Administration said in last week’s oil supply-demand report that U.S. production was back to record highs of around 12.3 million barrels per day, after falling off in recent months. The U.S. oil rig count, which reflects future production, also rose last week for the first time in four weeks, signaling higher output to come.

Even so, not all are bearish about oil, it appears.

A Reuters survey published on Monday showed Brent likely to hold near $70 for the remainder of the year due to what was termed as “elevated supply risks in the Middle East”.

The monthly survey of 43 economists and analysts forecast that the U.K. benchmark will average $68.84 in 2019, little changed from the previous poll’s $68.57 consensus.

Like oil, gold too is likely to have an eventful week. In the precious metal’s case, it will be whether it gets to build strongly on the $1,300 level it recaptured last week to reach highs above $1,330. 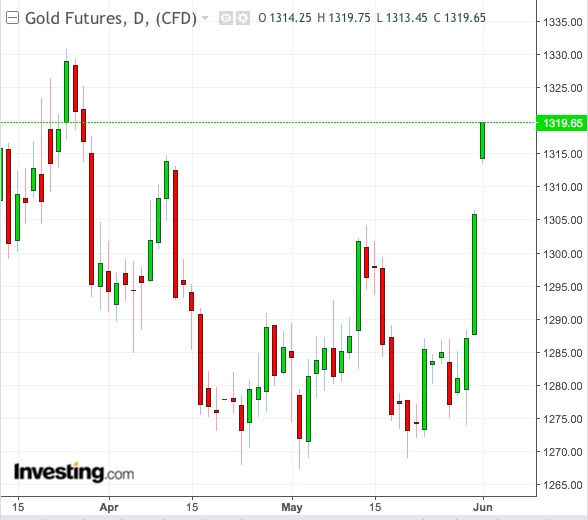 for August delivery, traded on the Comex division of the New York Mercantile Exchange, reached $1,317.75, the highest since the week ended March 24.

The path of least resistance in gold seems to be higher, with genuine fears about the economy driving demand for the safe haven—a flip from recent weeks when the U.S. dollar was the preferred hedge to the trade war.

China is ramping up its own chip ...