The debate on whether Europe is even close to getting a handle on the coronavirus versus the prospect for US economic growth in the second quarter will likely shape the direction for oil prices this week, as crude markets try to break free from their low $50s to mid-$60 range. 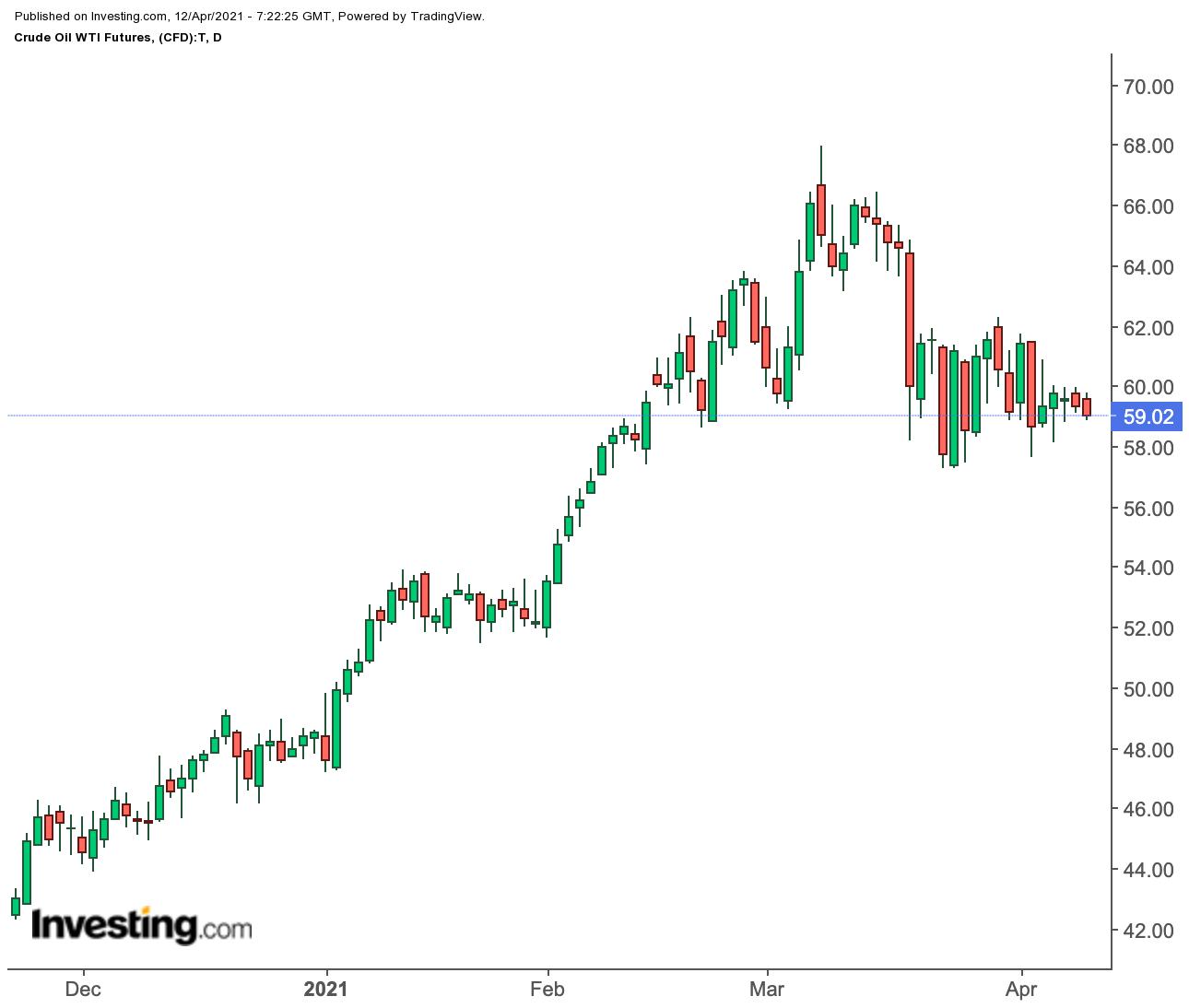 As for , there’s little immediate hope for the yellow metal to move decisively beyond the $1,750-ounce level it briefly pierced last week, with US Treasury yields and the seen staying volatile after the latest mixed views on the economy by Federal Reserve Chair Jerome Powell. 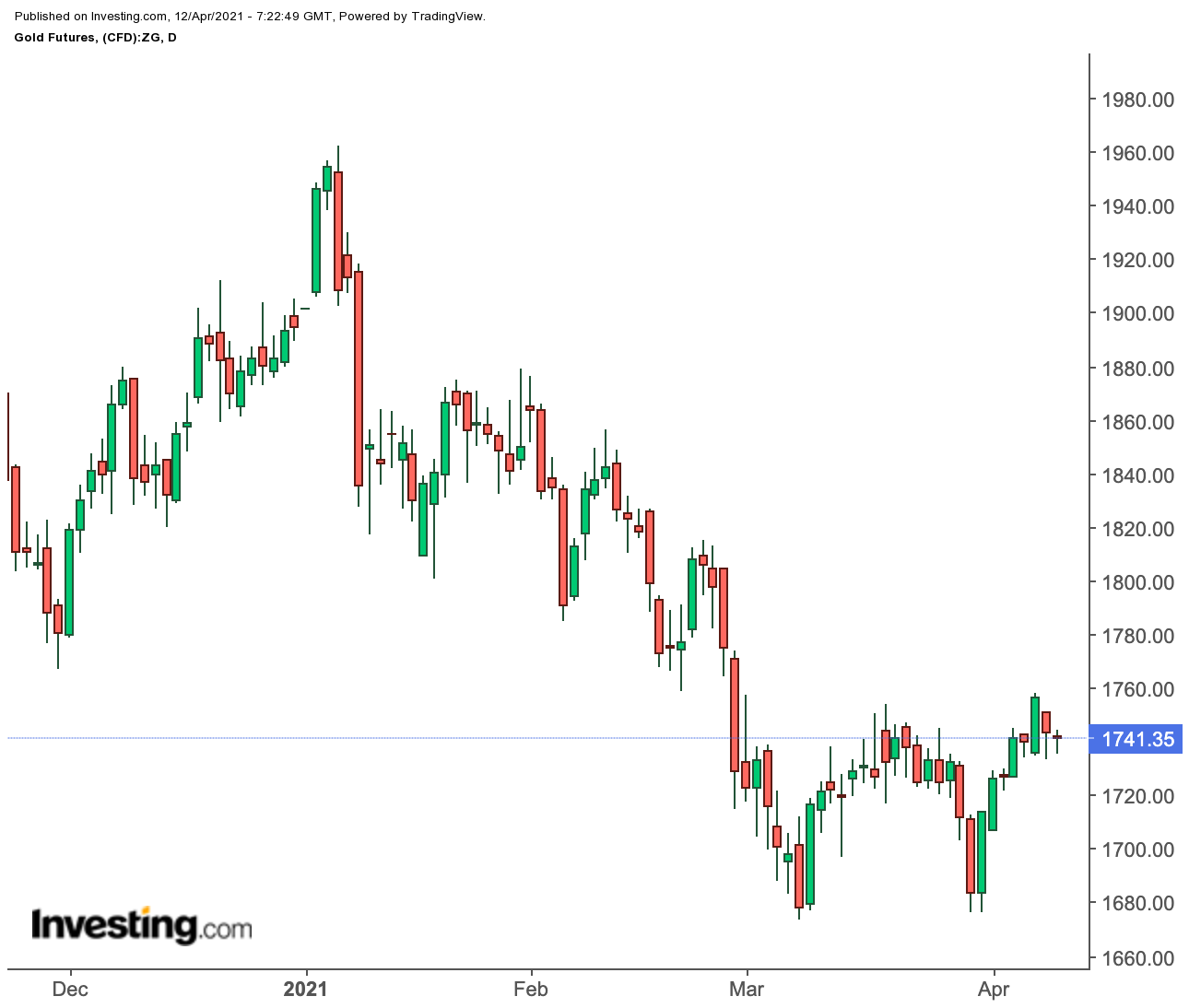 Appearing on an interview with CBS’s 60 Minutes, Powell said America was at an “inflection point” with stronger growth and hiring trends from rising vaccinations and powerful policy support, versus the risk of a third COVID wave in Europe and new infections ramping up in India.

In short, the US economy was poised for stronger growth, while globally, the pandemic still posed a threat, he said.

It was the same mixed variables that sent crude prices down as much as 3.5% on the week.

A big worry that hangs over Europe now is the resurgence of the pandemic via the U.K. strain that has made its presence felt since October. The B117 variant, first seen in Britain, is spreading in at least 114 countries. It is not only more contagious than the original COVID-19, but also deadlier.

Europe COVID Vs US Growth

That’s why Europe’s progress in vaccinations last week was met with a measured response by markets. The bloc’s advancement in immunization wasn’t bad: Germany doubled the number of daily COVID-19 vaccinations as last week ended and France hit a key immunization milestone a week ahead of schedule.

With the United States setting vaccination records almost daily and leading the world in assuring a faster return to normal life, despite continued breakouts in some US states, Europe represents the missing piece of the global energy demand jigsaw.

Put simply, what happens in Europe through April will determine how demand for , and will shape in the second quarter—the busiest period for global travel, which typically lasts till the end of Q3 in September.

Last week’s reporting on the pandemic showed B117 cases continuing to scorch parts of Europe. Poland experienced 60 times more coronavirus infections than a year ago while Germany’s infection rate doubled, triggering a ban on nighttime gatherings in Berlin.

India, the third largest crude buyer after China and the United States, had also been experiencing a record of more than 100,000 daily infections.

That’s why futures of both US crude and global benchmark Brent ended down more than $1.50 a barrel each last week.

Iran Talks Another Wildcard For Oil

Oil traders are also expected to keep a close watch on talks between Iran and global powers which enter into a second week in Vienna, as Tehran tries to find a way to end the two-years of US sanctions on its oil, imposed by the former Trump administration.

The White House, now under President Joseph Biden, is agreeable to ending the sanctions, provided Tehran shows proof that its nuclear program isn’t capable of producing an atomic bomb. Iran is, however, demanding the sanctions be removed first before it makes such concessions.

Despite the differences between the two sides, the talks have made progress almost everyday since they began last Tuesday, reports said.

Iran has said that it could return “within months” to its peak oil production of nearly 4 million barrels a day once the sanctions are lifted. Sources familiar with the country’s crude output estimate its current production at around 2 million barrels daily.

Analysts say the additional supply from Iran, whenever that comes, will lead to a reconfiguration of global oil supply that could be more bearish than bullish.

Be that as it may, an official of the Biden administration said on Friday that not every sanction existing against Iran may be lifted. “There are some that are legitimate sanctions even under a very fair reading, scrupulous reading“ of the deal, the senior State Department official said.

Gold, meanwhile, slid as the new week opened after emerging partially victorious from its fencing duels with US bond yields and the dollar last week on mixed inflation readings.

Both spot and gold futures broke above $1,750 on Thursday, smashing the key resistance the first time in six weeks, as bond yields and the dollar retreated from their recent highs.

The Dollar Index, which pits the greenback against the and five other major currencies, was at 92.27, versus the 93.13 level it scaled on Apr. 5.

Technical charts for both COMEX and spot gold indicate a potential return to $1,800 pricing if the yellow metal reprises this week’s highs at next week’s close.

Charts aside, gold prices could also be influenced by Tuesday’s update of the US Consumer Price Index for March, which is expected to have risen last month and over the prior year, according to estimates. If confirmed, it would mark the fastest increase in eight months.

Excluding the cost of food and fuel, core inflation is projected to climb from a month earlier and on a year-over-year basis, a tad faster than the 1.3% increase registered in February.

The Commerce Department will, meanwhile, release data on retail sales for March on Thursday. The consensus forecast is that the report will show retail sales jumped , rebounding from February’s steep decline of 3%, which was the biggest drop since April 2020.

Excluding the automobile sector, sales are expected to rise , snapping back from a drop of 2.7% in the preceding month.

In addition to the CPI and core inflation data, this week’s economic calendar also features reports on , , , as well as a pair of surveys on manufacturing conditions in the and regions. The preliminary reading of the ‘s consumer sentiment index is also on the agenda.

White House didn’t get a heads up ...