Will the seizure of two British-operated tankers by Iran be the catalyst for higher oil prices this week?

In Monday’s Asian session, both crude and oil were up about 1% each or more, in a delayed response to Friday’s action by Tehran—which, itself, was a retaliation over an Iranian tanker held by U.K. authorities off Gibraltar.

But with more than a week of lag, it’s debatable what sort of premium the tit-for-tat move can induce during a new week of crude trading. 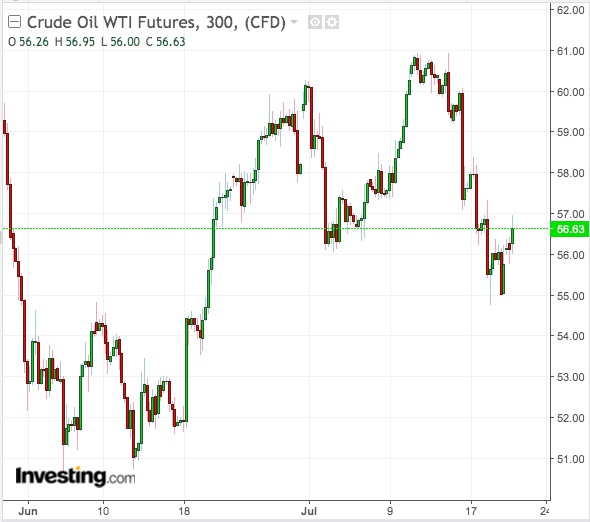 Despite a higher settlement in New York on Friday, the two crude benchmarks still ended with sharp weekly losses. WTI finished the week with a 7.6% loss, its largest in seven weeks, while Brent registered a 6.4% slide, its worst in more than seven months.

The plunge came despite weekly data showing another outsize U.S. decline, which resulted in a net withdrawal of 12.5 million barrels in just two weeks.

Dominick Chirichella, director of risk and trading at Energy Management Institute in New York, noted that in the absence of supply shocks, demand worries have weighed on the market.

He added on Iran:

“It is not clear what move the U.K. or the U.S. will do in the coming days as not much has hit the media airwaves from the U.S. … yet.

“For now, the concern over a slowing of the global economy seems to still be outweighing the evolving geopolitical situation.”

Dark clouds are circling over the demand for crude.

The Paris-based International Energy Agency lowered its 2019 demand growth forecast to 1.1 million barrels per day, cautioning of another cut ahead if the global economy continued to cool.

On the U.S.-China front, talks seem to have stalled again, with President Donald Trump warning of more tariffs against Beijing for not buying U.S. farm products. The Xi Jinping administration, meanwhile, continues to bristle at Trump’s treatment of Chinese tech giant Huawei.

A glut also seems to be shaping up in gasoline, the fuel that has been the forerunner of this year’s oil rally. A cooling economy and a rise in refining capacity could lead to another gasoline surplus in late 2019 and early 2020, said Bank of America (NYSE:). It added:

“Gasoline cracks had a rough start to the year and although fundamentals improved through mid-year thanks to refinery outages, cracks for the remainder of 2019 and 2020 look weak from a historical perspective.”

Amid these, efforts to get the U.S. and Iran on to the path of diplomacy is continuing, heightening the fear of oil bulls who worry that any relaxing of Trump’s sanctions on Tehran will pave the return of Iranian crude supply that the market barely needs.

Logic Compels Trump To Do Deal With Iran; But Will He?

Trump has said in the past that he wants OPEC to pump an additional 2 million barrels per day of oil to lower energy costs for U.S. consumers. The president needs U.S. fuel prices to be as low as possible ahead of his re-election campaign for November 2020. Yet, the Organization of the Petroleum Exporting Countries has gone the other way, tightening global supply by 1.2 million barrels per day since December 2018. OPEC wants to keep up the cuts up through March 2020 at least, and might extend them again thereafter.

Logic compels Trump to agree to reach a new nuclear-for-oil deal with the Iranians because that additional 2 million bpd he’s seeking from OPEC is right there with Tehran. After the signing of its original 2015 nuclear accord with the Obama administration and other world powers, Tehran produced up to 2.5 million bpd at its peak.

Investing.com’s projection is that WTI and Brent will fall about $5 a barrel each within a week or two of the announcement that Iran and the U.S. are ready to talk. And every rebound thereafter will be checked by the possibility of an impending Iran Nuclear Accord 2.0.

Yet, despite their best intentions, there are no immediate signs that the two sides will agree to anything at all, with Iran demanding that Washington stand down all sanctions against it for negotiations to start, and the Trump administration saying there should be no pre-conditions for the talks.

Gold Looks To First U.S. Rate Cut In A Decade 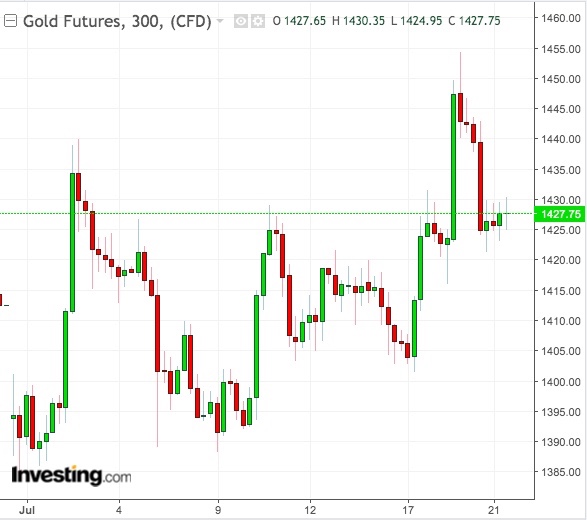 Gold too began the new week on a positive note in Asia, with both and of the precious metal hovering at $1,400 per ounce, as traders closed in on the first potential U.S. rate cut in more than a decade.

The Federal Reserve a 25-basis point rate reduction at its July 30-31 and, possibly, a 50-bp cut in August.

Trump, who has criticized the Fed for not cutting rates earlier, lashed out on Friday at what he called the central bank’s “faulty thought process.” Fed Chairman Jerome Powell has repeatedly shrugged off Trump’s attacks this year, citing the central bank’s independence and a lack of necessity to respond to short-term political pressure.

Beyond the Fed, central banks worldwide have been taking an increasingly dovish stance on monetary policy to the benefit of non-yielding gold.

The is widely expected to give signs of further easing this week, with market odds for a cut having even surpassed 50% on Friday. Smaller central banks from countries such as or already took action in that direction on Thursday.

The outlook for lower interest rates has spread across the fixed income market resulting in $13 trillion worth of bonds with negative yields, increasing the appeal of gold.