Everything in oil this week may depend on how quickly things fall—and by that, I mean the open interest in U.S. crude’s front-month, production reported by the EIA, capex cuts announced by oil majors Exxon (NYSE:), BP (NYSE:) and Shell (NYSE:) and the oil rig count from Baker Hughes.

In gold’s case, the race is still on for a test of $1,800. But volatility could keep it at the lower end of $1,700 as the central banks that matter—the , and —hold meetings this week. Thursday’s will also determine if we’re continuing to flatten the curve on job losses; if so, gold could see mixed signals from an equally strong and the .

“I am maintaining my overall oil view and short-term bias at cautiously bearish as the market moves its focus to external issues around the world that could have a negative impact on global oil demand growth,” Dominick Chirichella at the Energy Management Institute in New York said as plunged 9% and London’s 3% in Monday’s early trade in Asia.

WTI is being pressured by development that could set it up for another round of sub-zero prices. 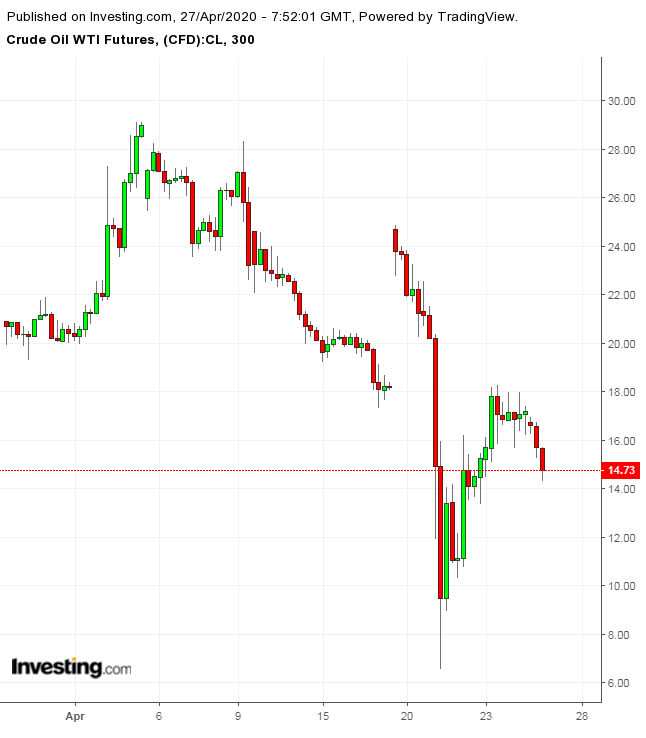 The front month, June, finished last week at a contango, or discount, of more than $4 per barrel to July. Open interest in the has fallen by nearly 220 million barrels, or about a third, since Monday and as of Friday, was about 25 million barrels less to the liquidity in nearby July.

The shifting open interest signals investors’ preference to be in a “safer” contract that pledges to deliver oil later rather than sooner in a glutted market. It’s also a sign that June WTI could also be in for a squeeze, as happened with May, when its expiry comes up in three weeks.

The so-called GLOPEC arrangement has committed to cut at least 9.7 million barrels per day. Kuwait, OPEC’s fourth-largest producer, says it has already begun cutting ahead of the group. So has Nigeria, because there’s just nowhere to put any more of its oil. U.S. drillers have shed 305 over six weeks — or 45% — and capital expenditure cuts could take away many more barrels across the world.

In Russia, the industry is even considering resorting to burning oil as the fastest means to dispose of supply, sources told Reuters.

But Time Not On Oil’s Side

Yet, all this may not be fast enough in a world losing between 20 million and 30 million bpd in demand. Time is of the essence and it’s not on oil’s side for the moment.

According to the Energy Information Administration, there’s about 16 million barrels or fewer of space left at the Cushing, Oklahoma hub that serves as delivery point for expiring WTI contracts. Cushing saw a 5-million-barrel for the week ended April 17. If that rate of fill is maintained, then Cushing could max out in another two weeks. But the EIA also indicates that much of the space at Cushing may have already been leased out, meaning even that math may be academic.

Goldman Sachs, meanwhile, says the global oil market is on track to test storage capacity limits in as little as three weeks, requiring the shut-in of nearly 20% of global production.

The world has reached an inflection phase in the COVID-19 pandemic where rebalancing is starting to occur, but it will likely take 4-8 weeks for commodity markets to carve out a bottom in demand, the Wall Street firm adds in an April 24 report.

With , aside from Wall Street and the dollar, attention will be on the meetings of the Bank of Japan on Tuesday, the Federal Reserve on Wednesday and the European Central Bank on Friday.

But gold bulls might be pleased with another development in the yellow metal over the weekend. 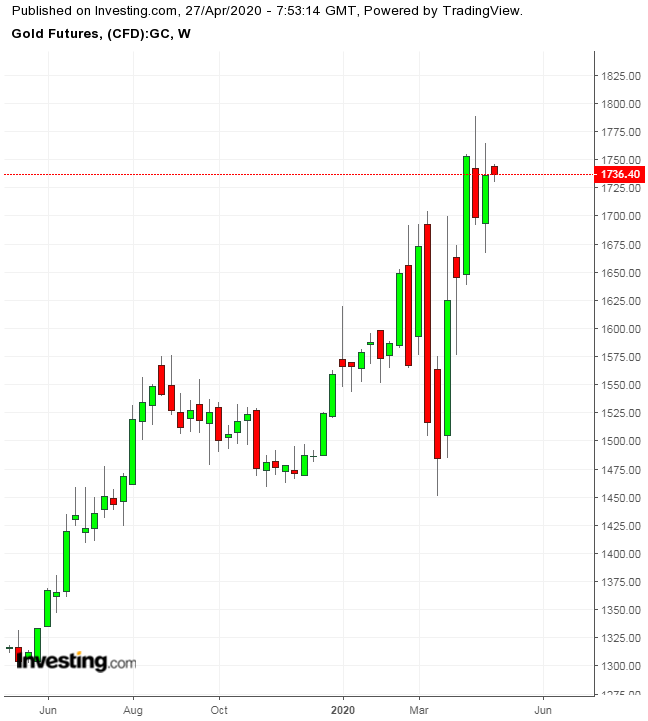 The auspicious Akshaya Tritiya Day on Sunday saw an 8% jump in gold buying, keeping up with the demand surge typical for the precious metal during one of India’s most keenly-observed religious festivals. This was despite most of the country’s 1.4 billion people remaining on lockdown over the coronavirus.

“Akshaya Tritiya has great importance in our culture and we are sure there will be brisk gold buying digitally in the days to come,” said Sachin Kothari, director at Augmont, an online firm trading in bullion.

Gold is a sacred metal in India, and its ornamental value is second to none for its people. Statues of Hindu deities in Indian temples are typically adorned with the yellow metal, which is also a staple expense at weddings. India’s central bank holds most of its reserves in gold and Indians generally wear gold jewelry in daily life and at social occasions, resulting in an annual import of 800 to 900 tonnes.

“Ignoring the intra-day noise, gold is trading in a wide—but real—$100 range between $1640.00 and $1740.00 an ounce; such is the world we live in,” said Jeffrey Halley, analyst at OANDA. “Trade intraday if you wish but separate the noise from the bigger picture.”

Commodity Prices Can Fall Below Zero. Why ...