It’ll likely be a week of different reckonings across the commodities space, with lawmakers in the U.S. Congress finally reaching a fiscal deal for COVID-19 aid.

Prices of , beaten to near five-month lows just weeks ago on the seemingly irreconcilable differences among Democrats and Republicans on the deal, climbed back above the key $1,900 an ounce level as agreements were reached for a $900 billion coronavirus stimulus and a further $1.4 trillion}} to fund U.S. government programs. 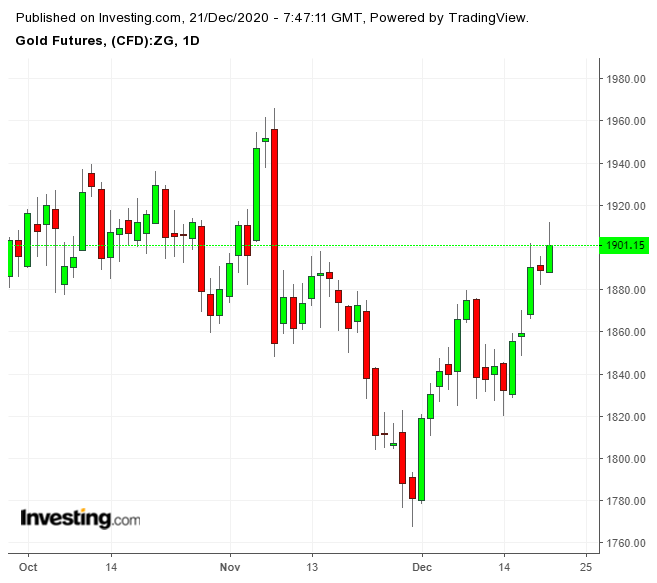 Gold’s longer upward trajectory would be affirmed by a Democrat victory in the Georgia state election run-offs on Jan. 5, which would give the incoming Biden administration control of the Senate and the ability to spend money freely in the fight on the pandemic.

Under those circumstances, the yellow metal could easily recapture record highs above $2,000 hit in August. Even now, a whiff of that bull fervor looks promising enough to restore gold to the mid $1,900 levels or beyond as investors brace again for a return of inflation and a hedge against the virus wreaking more damage to the U.S. economy.

Investing.com’s Daily Technical Indicator showed February gold as a “Strong Buy,” with an immediate Fibonacci resistance of $1,927 that it could likely shatter by the time trading opens in New York.

Sunil Kumar Dixit, technical analyst for gold at SK Dixit Charting said a settlement between $1,927 and $1,935 for Monday’s session will help confirm gold futures’ breakout and target toward $1,968 before reaching higher levels.

Brent Crude Could Fall Below $50

Oil prices, conversely, could fall deeper than Monday’s early declines in Asia amid increasing concerns that the battle against the pandemic is far from over.

Hedge funds chased up by more than a third over the past seven weeks on exuberance over COVID-19 vaccines that took a barrel of oil above $50 the first time since March.

But Monday’s trading in Asia scalped nearly 3% off oil prices as futures of , and all reacted with caution, despite the passing of the stimulus. 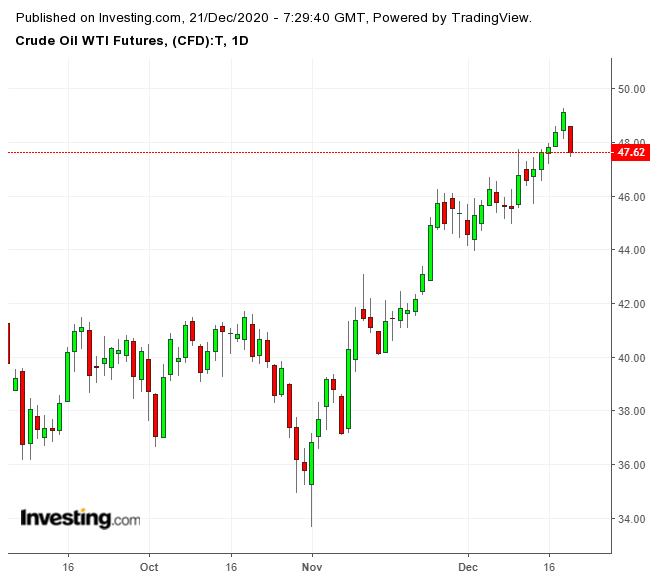 More losses seemed likely amid a new coronavirus strain detected in the U.K. that was reportedly 70% more transmissible and worrying enough for President Boris Johnson to order harsher lockdowns and virtually little or no celebrations for Christmas.

That the crisis will possibly get worse before it gets better—and “relief” literally that millions of Americans will receive paychecks and some compensation for the agony endured—could trigger a sell-on-the-fact after the buy-on-the-rumor that took risk assets to recent highs.

A shorter trading week before Friday’s Christmas holiday might be another motivation for traders to pare rather than pile on risk. 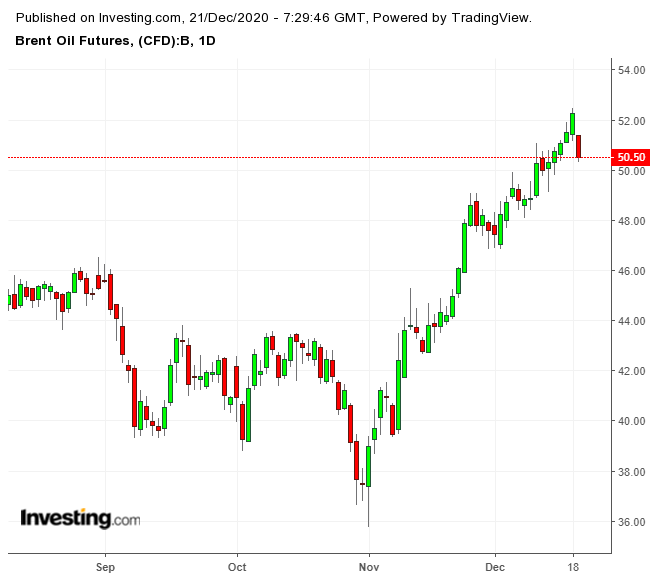 “Brent may fall below $50 a barrel and WTI may drop below $45 this week as investors want to adjust positions ahead of Christmas holidays.”

Jeffrey Halley, OANDA’s Sydney-based senior market strategist for Asia, observed in his opening note for the week that oil and other risk markets had adopted a “light at the end of the tunnel approach” since the Pfizer (NYSE:) and Moderna (NASDAQ:) vaccines burst onto the stage.

But the latest events surrounding the pandemic, including the U.S. death toll that was claiming one person every 33 seconds, could make negotiating Q1 2021 “a torturous affair,” he said.

“Once the markets have finished panicking and unwinding recent speculative positioning, the fundamentals of lower for more extended monetary policy, and the search for yield in a zero percent world, will quickly reassert themselves.”

But this thesis will collapse if the new and more transmissible strain of the virus proves resistant to the vaccines in the market, Halley said. “Then all bets would be off. That does not appear to be the case at this time, though.”

Barr sides with Pompeo over Trump that ...

Copper And Lumber Sending Signals For All ...