U.S. President Donald Trump has proven again to be the biggest disruptor of oil markets, with his 11th hour flip-flop on Mexican tariffs likely to extend crude’s comeback rally from last week.

On the precious metals front, gold is expected to stay on course to cracking its next upward target of $1,400 per ounce on bets the will lay the ground for rate cuts at its June 18-19 meeting. A Fed easing will weaken the and boost alternatives to the currency—primarily gold and other investible commodities such as oil.

Oil Out Of Bear Market … For Now

Trump’s walk-back from his threat to impose escalating tariffs of 5%-25% on Mexico beginning on Monday removes one of the biggest headwinds for oil, allowing oil prices to claw out of the bear market they had been pushed into. 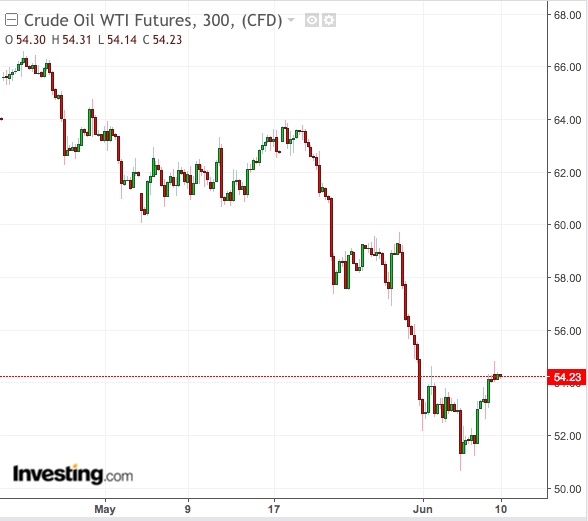 Benchmark and initially lost more than 20% from 2019 highs hit in April on concerns that the tariffs on Mexico could severely upend business in the United States. Mexico exports auto components, televisions, clothing, alcohol, agricultural products and fuel to the U.S. in daily trades amounting to $1.7 billion.

Until Thursday night, Trump maintained the tariffs were on, appearing unimpressed with Mexico’s pledge to try and stop the flow of drugs and undocumented migrants from its side of the border to the U.S.—his precondition for halting the action.

But with the U.S.-China trade war already threatening a global recession, and members of his own Republican party and staff warning him that he risked disrupting a critical marketplace with the new tariffs, Trump backed down on Friday and accepted Mexico’s promises. The New York Times reported that the new immigration deal with Mexico that Trump hailed on Sunday consisted largely of actions already promised several months ago.

For more than a year, Trump’s actions and policies related to oil have largely favored oil bears—an outcome not really surprising, given his conviction that high gasoline prices at the pump could hurt his reelection bid in 2020. The president’s intense dislike for OPEC and its influence on crude prices has also constantly pitted him against the cartel, as he issued tweets aimed at depressing the market.

Could Trump Have Another Scheme To Push Crude Lower?

It’s not known yet that with the truce declared with Mexico and oil’s march higher—it has already recouped 7% since the worst of the sell-off on Wednesday and could continue climbing, with OPEC stepping up its rhetoric on production cuts—Trump would not attempt to push the market back down. He still has the trade war with China hanging heavily over the global economy. Economists say if tariffs expand to cover all U.S.-China trade, and markets slump in response, global GDP will take a $600 billion hit in 2021, the year of peak impact.

The president’s other trump card—so to speak—could be to strike a deal with Iran. OPEC-bashing tweets aside, Trump’s other major disruption of the oil market has been his sanctions on Iran, which have added to the squeeze on global crude supply. Aside from U.S. sanctions on Venezuelan oil, Trump’s offensive against Tehran has been one of the few surprising gifts to oil bulls, adding to this year’s early rally in crude.

But while he has largely remained hostile to Iran, the president has also said he was open to hatching a new nuclear deal with the Islamic Republic, which may be forced to accept his offer given its economic difficulties. If such a breakthrough is announced, Iranian crude exports, now at under 1.5 million barrels per day, could reach pre-sanction levels of around 2.5 million bpd. That could frustrate attempts by OPEC, a group that ironically includes Iran, to push prices higher by choking supplies.

The other wildcard in oil, of course, is the weekly dataset from the U.S. Energy Information Administration, which has surprised the market with unseasonable inventory numbers for crude, gasoline and distillates for four weeks now. Crude stockpiles in particular have risen up nearly 44 million barrels since mid March, with refiners runs staying below the 95%-to-capacity norm of this time of year. Analysts who are typically bullish on oil have expressed disbelief in the EIA’s numbers, even criticized the agency for making what they described as “flawed adjustments and estimates.” It remains to be seen whether the EIA data would buck the trend this week.

In gold, bullion and futures of the yellow metal rallied for an eight straight day to 14-month highs on Friday, boosted by bets that the Federal Reserve after less-than-stellar U.S. for May.

Fed Chairman James Powell assured markets last week the central bank will do whatever it takes to shield the U.S. economy from recession owing to trade wars and preserve nearly a decade of record growth. 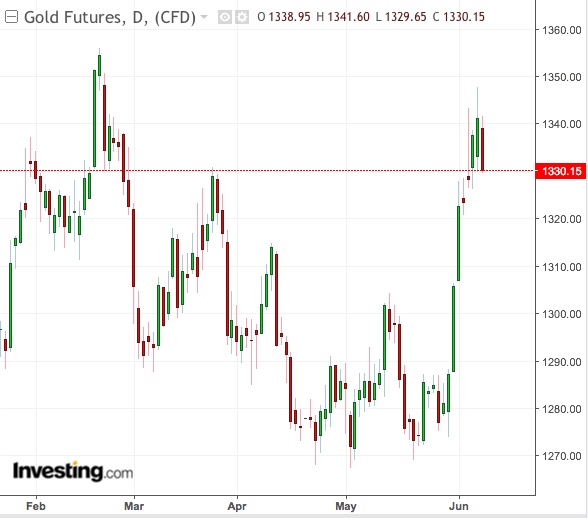 Gold pundits mostly see August gold futures piercing $1,400 between now and June 19, when the Fed is due to issue its after its monthly meeting. While the central bank is not expected to outrightly decide on a rate cut at this round, traders will be closely watching the language in its statement to gauge how dovish it is, and whether an easing could be expected in coming months.

Federal funds futures markets are pricing in a half-point cut this year and another 40 basis points (equal to 0.40%) in 2020.

Amazon is descending on New York with ...