Two weeks after oil appeared to have survived its biggest risk test in years, Libya has tossed a new political grenade at the market. And this too may come to pass.

It’s a different story in precious metals, however, with palladium keeping to its explosive streak and likely to target $3,000 an ounce next.

Libya, which sent crude prices back above $100 a barrel just a year after the financial crisis when the Arab Spring of 2010 ousted dictator Muammar Gaddafi, is back at the oil market’s forefront.

But traders don’t seem unduly worried about the threat Libya poses, possibly because their attention is now more on the monstrous builds in U.S. fuel stockpiles over the past two weeks.

Talk swirled on Tuesday that Libya’s oil output could soon fall to 72,000 barrels per day from a regular 1.2 million bpd. The crunch is due to a blockade on oil shipments out of the North African state forced by Khalifa Haftar, a Libyan warlord that Tripoli’s internationally-recognized government says could become the next Gaddafi.

The Libyan threat comes exactly 14 days after the United States and Iran retreated from the brink of war, leaving the Middle East, which produces 40% of the world’s oil, at relative peace.

Yet the calm that followed the Jan. 6 rocket launches by Tehran at American air bases in Iraq — after the killing of Iranian general Qassem Soleimani — may be questionable. There were reports of two more rockets landing outside the U.S. embassy in Baghdad on Monday, although again, there were no reports of casualties.

In Libya’s case, analysts estimate that at least 800,000 barrels per day may have been disrupted since Saturday, including 300,000 bpd from El Sharara, its biggest oilfield. Libya’s National Oil Corp had declared force majeure, or a waiver on contractual obligations, on crude loadings from El Sharara and the El Feel oilfield in the country’s southwest.

Libya Could Be Game Changer For Oil … Yet Might Not

The Libyan situation could be a game changer for oil, if allowed to persist. 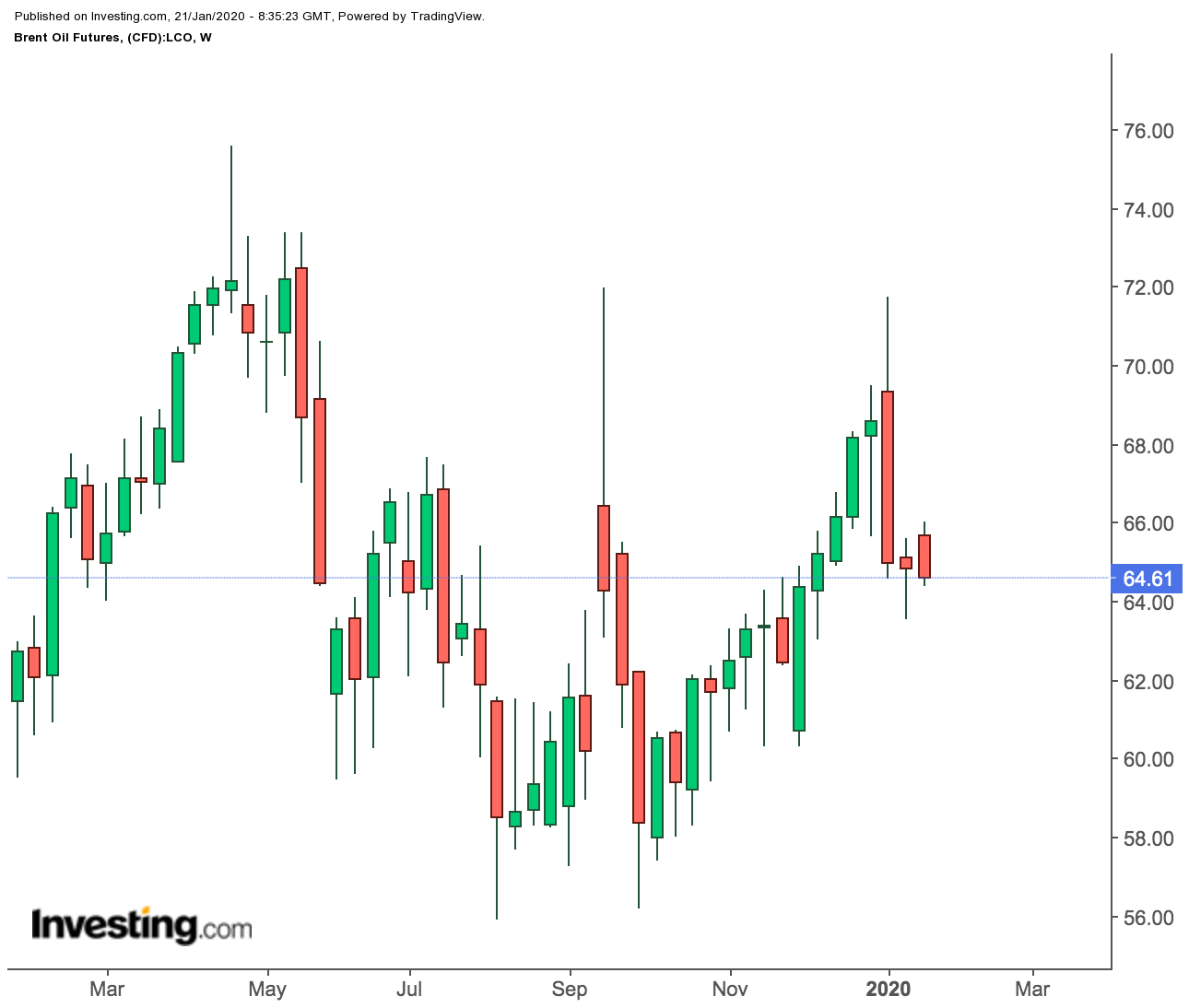 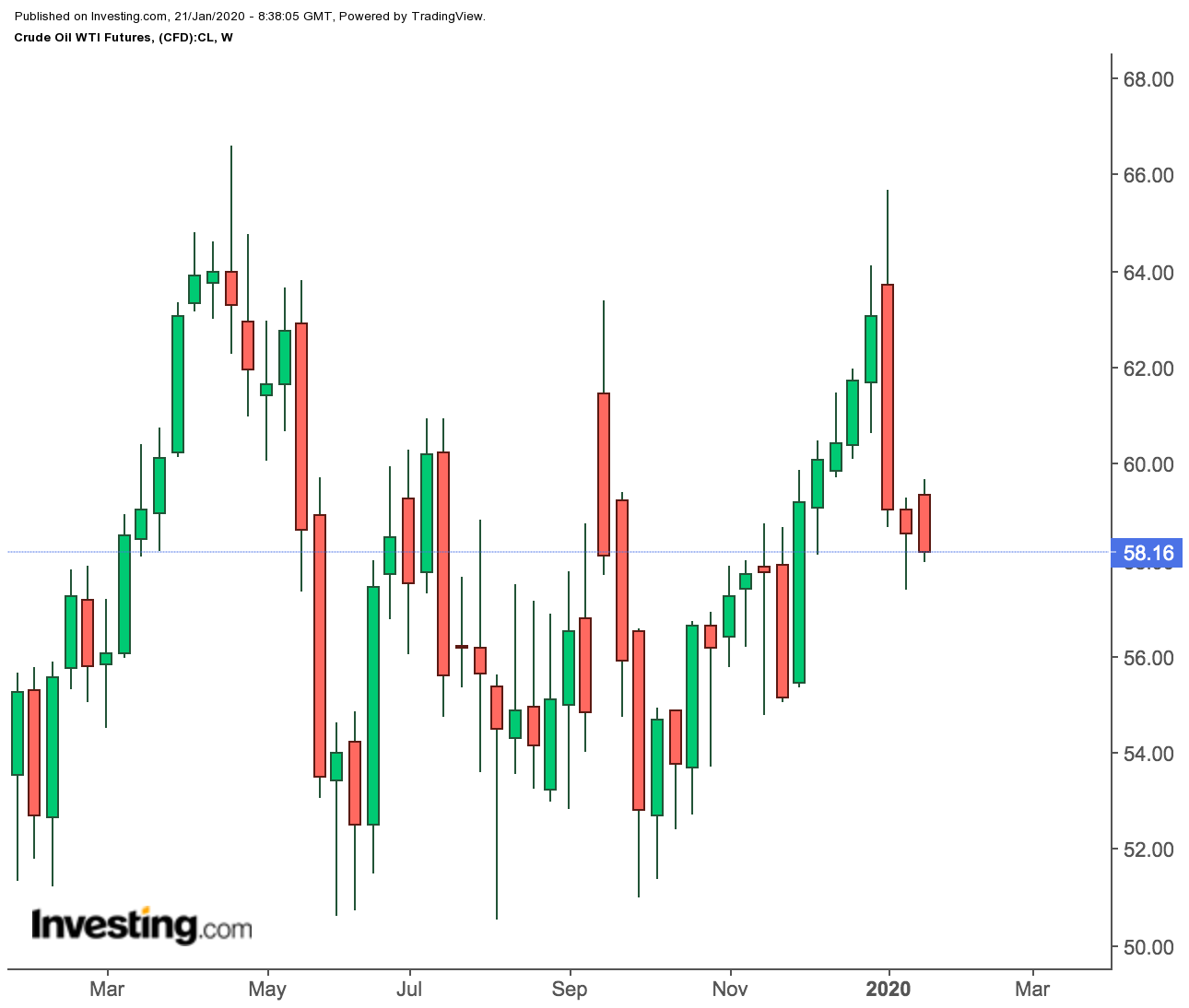 “Every time we get a big geopolitical event, the market spikes up but everybody looks at that as a chance of a selling opportunity,” Tony Nunan, oil risk manager at Mitsubishi Corp in Tokyo, was quoted saying by Reuters.

Prices could rise when New York crude traders come on during their day as U.S. markets reopen after the long weekend and Martin Luther King holiday.

Yet there’s a good possibility the Libyan risk may continue to be underpriced after builds of 15.7 million barrels in U.S. and 13.8 million in over the past two weeks — versus expectations of 5.8 million and 5 million, respectively.

Further weighing on crude prices was the published on Friday by industry firm Baker Hughes, that showed drillers adding 14 rigs last week to bring the total number across U.S. oil fields to 673. A higher rig count, in the simplest sense, means higher crude production. Over the past two weeks, the rig count had fallen, extending last year’s drop of 208.

“The market has shifted to a baseline with a modestly bearish outlook and a reluctance to price in risk in the manner it previously has,” Greg Priddy, director of global energy and the Middle East for political risk consultancy Stratfor, said in a note just before the weekend.

On the precious metals front, gold is back above the key $1,560 level as markets question the potential success of the $200 billion U.S.-China deal, which leaves both nations retaining tariffs imposed on each other prior to the agreement.

Gold prices also rose on Tuesday as a hedge against the International Monetary Fund’s gloomy global outlook for 2020.

, as well as , which tracks live trades in bullion, were both above $1,566 at the time of writing. 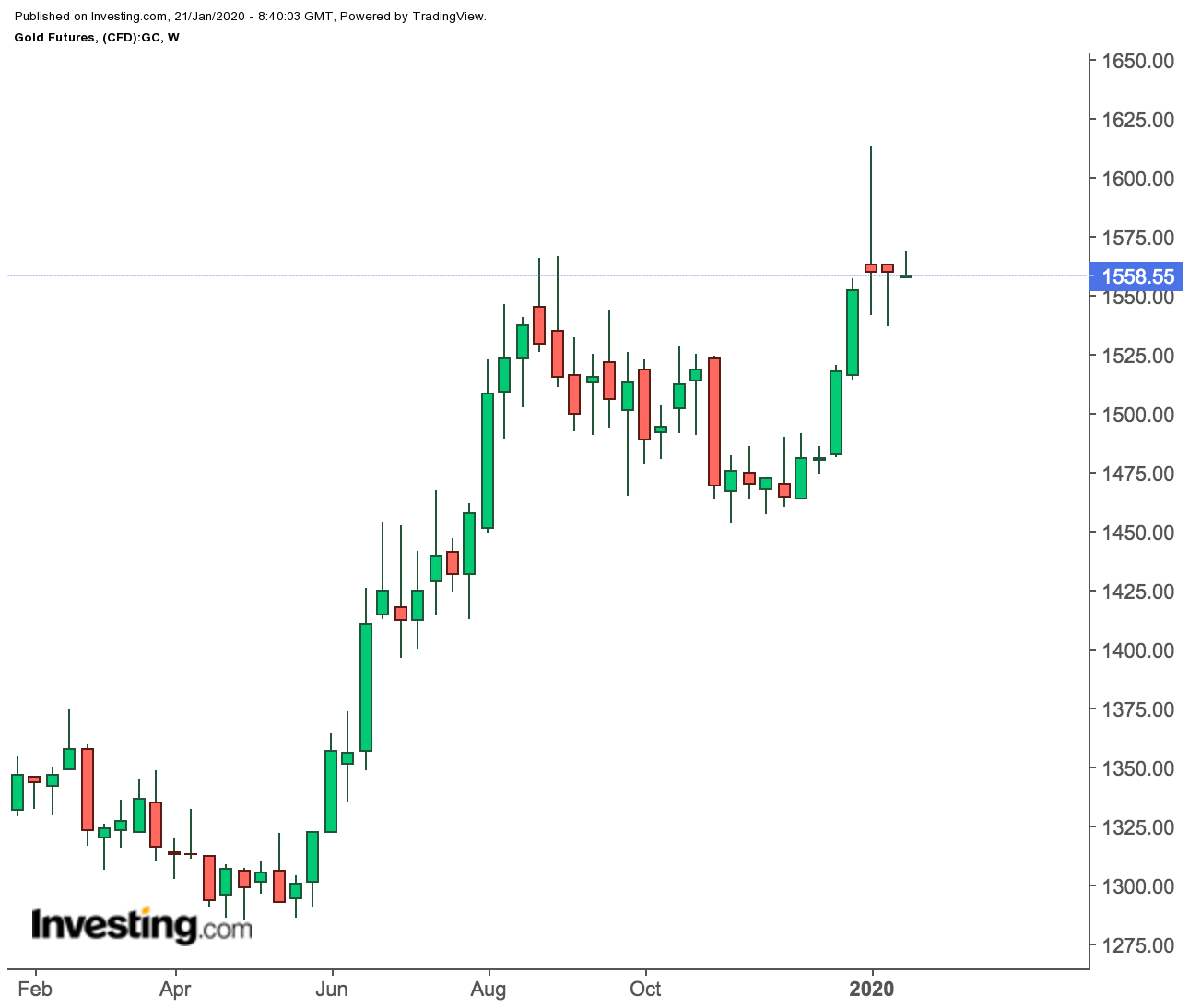 “Following a noteworthy positioning squeeze, the yellow metal is creeping higher once again,” TD Securities said in a note about gold, adding:

“Along with positive expectations for growth comes the potential for inflation to creep higher, and without a commensurate Fed response, this would translate into lower real rates.”

The Federal Reserve by a quarter percent point for three months back-to-back in 2019, before bringing that easing cycle to a halt in December. With U.S. economic data mostly upbeat now, analysts the central bank to embark on a new round of cuts unless the trade war recurs.

Palladium In A World Of Its Own

But it’s palladium that’s really scorching the headlines in precious metals after its spot price shattered the $2,500 ceiling last week. That’s a 30% gain since the start of the year.

The palladium story is the same as last year: there’s barely any new supply of the autocatalyst metal to sell on the market, say traders. 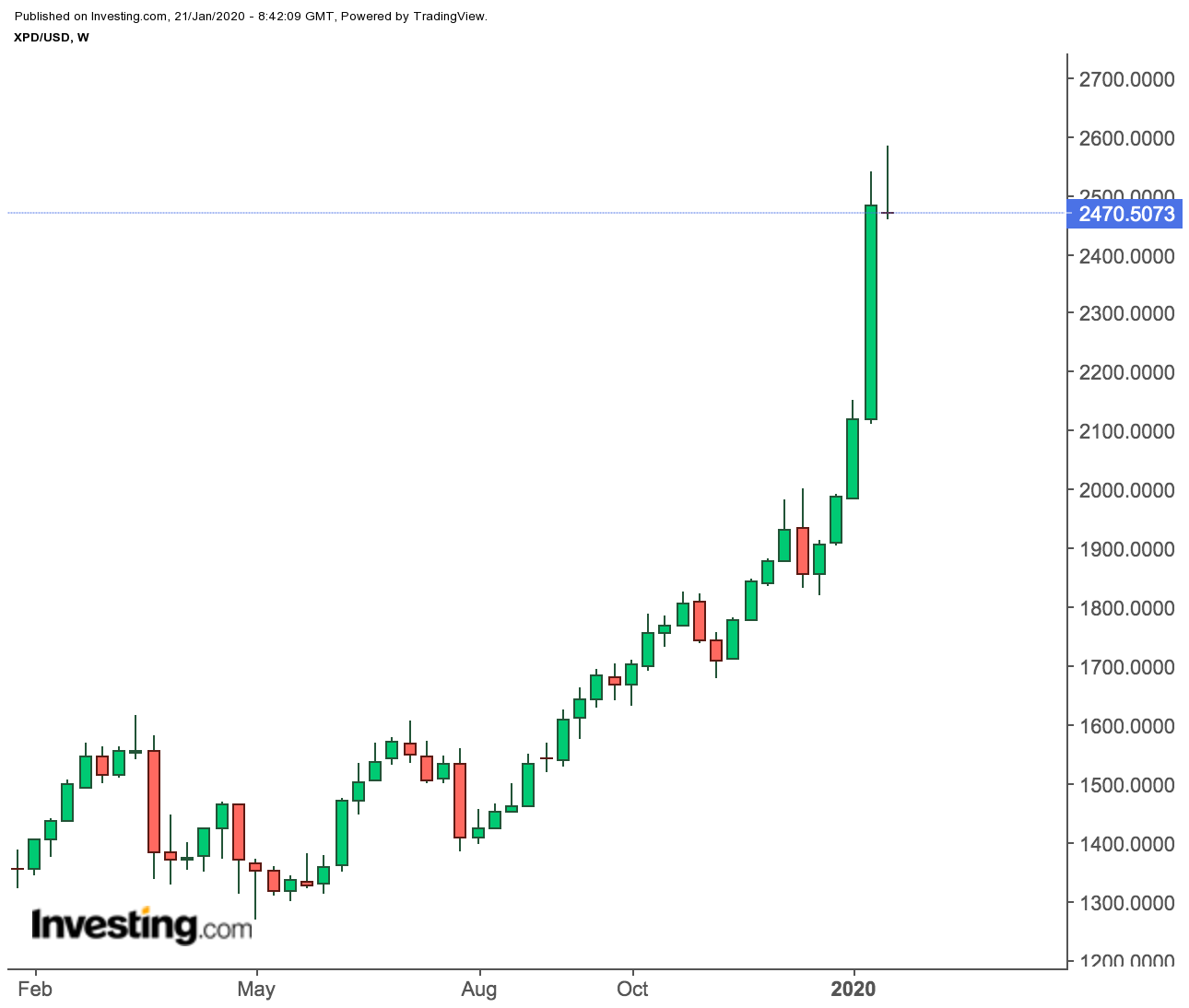 Some say a palladium crash will come at some point, especially if supply stabilizes out of the main centers, South Africa and Russia.

“The dynamics are so strong. Nobody can tell me that this is just fundamentals,” Commerzbank analyst Carsten Fritsch told Bloomberg last week of the palladium rally. Said Fritsch:

“This is already becoming a bubble.”

Palladium was the best-performing commodity in 2019, with its spot price gaining 55%. is already up 30% year-to-date, hitting an all-time high above $2,584 on Tuesday.

At Investing.com, our next major target for palladium is $3,000.