As expected, Saudi Arabia and the United Arab Emirates aren’t ready to concede a barrel of oil beyond market needs, so that crude prices will not come under undue pressure. Yet, what might help the market more than the two countries’s resolve at Sunday’s OPEC meeting in Jeddah is to know the next planned action of their enemy Iran.

From accusations of sabotage leveled against Iran for damage to Saudi oil infrastructure, to widespread belief that it will somehow be able to skirt U.S. sanctions to add to the global supply of oil, the market will benefit from knowing how the Islamic Republic plans to respond to the various obstacles in its way.

Of particular interest will be what further payback, if any, it may have for Riyadh and Abu Dhabi for colluding with Washington in trying to choke Tehran off the market.

Overall, geopolitics is back like never before in oil as the Saudi-Iran face-off raises the specter of a new Gulf war that’s front-loading crude prices. There’s just one problem for oil bulls though: the U.S.-China trade war is blowing out at the same time, and the fallout to the global economy from that could offset much of the positive price impact brought on by the geopolitical risk that’s spiking in the Middle East.

For the record, the Iranians deny masterminding last week’s drone attacks on two Saudi oil pumping stations by Houthi rebels, who are known for their support of Tehran. Earlier in the week, both Saudi Arabia and the UAE reported that their oil tankers in the Gulf were hit by projectiles, implying that the Iranians had a hand in that too.

Oil Rallies Despite No Surprises In Jeddah 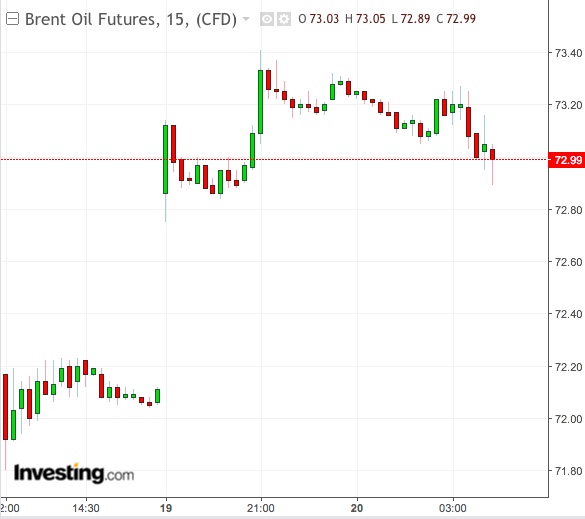 As markets opened Monday’s business in Asia, oil traders embraced OPEC’s stance at the weekend for an extension of production cuts. , the U.K.-traded global benchmark for oil, rose nearly 2% in early Asian trading to hover above $73.20 per barrel. , the benchmark for U.S. crude, were more than 1% higher at $63.75.

Yet, there was no telling whether the market would settle the day higher, by the time it got to the end of the New York session, or how it would fare over the rest of the week.

This is because Sunday’s OPEC meeting in Jeddah barely held any surprises for the market.

Saudi Energy Minister Khalid al-Falih said there was consensus among the cartel and its allies to drive down crude inventories “gently” while his country would remain responsive to the needs of a “fragile” market. Decoded, it meant: we will not add a barrel more than necessary now; in fact we want to cut even more to clear the existing backlog that built when we weren’t looking, no thanks to U.S. shale oil.

Alexander Novak, energy minister of Russia, the Saudis’ main ally under the OPEC+ alliance, suggested it was “too soon” to even talk about ending production cuts that have been on for six months now. UAE Energy Minister Suhail al-Mazrouei chipped in by saying that relaxing supply cuts was not “the right decision” as OPEC’s job “is not done yet”, especially with U.S. crude inventories rising unexpectedly and reaching highs last seen in September 2017 last week.

To be sure, the Jeddah meeting wasn’t expected to yield a decision on anything. It was meant to be a prep for the more important June 25 OPEC convention in Vienna, and the OPEC+ meeting that would follow a day later.

With Iran conspicuously silent since the Sunday sit-down, there was no input on what the Rouhani administration planned even as the rest of OPEC seemed happy to go along with the Saudi-Russia-UAE script.

That did not mean the Jeddah meeting was entirely devoid of fireworks.

Manuel Quevedo, oil minister of Venezuela, the other OPEC member under U.S. sanctions, said prior to the meeting that his country’s economy and oil industry was under economic and financial siege by Washington.

“This therefore generates disturbances in the flow of oil supply to the world market as well as serious economic damage and suffering to the Venezuelan people.” 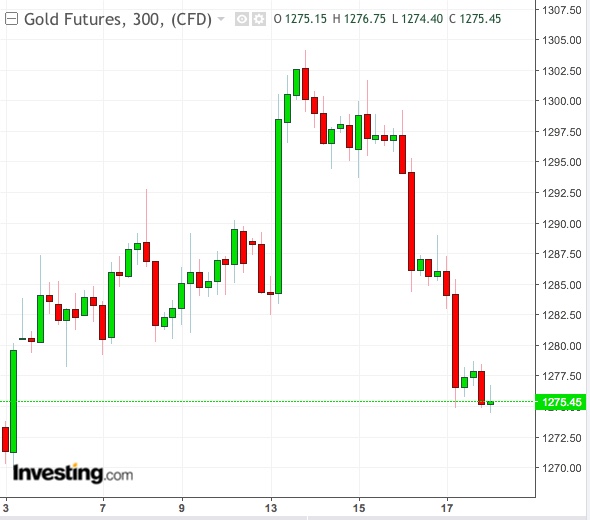 The trade war is also sending in all directions as investors try to decide whether the yellow metal or the U.S. dollar will be a more worthy hedge to the protracted battle, now running more than a year long and threatening to be a major drag on global growth.

Bullion and futures of gold hit two-week lows on Friday, breaking decisively from the bullish $1,300 levels, as dollar bulls made more of the uncertainty in U.S.-China trade talks than gold bugs.

Monday’s session in Asia wasn’t any greater for gold, with , reflective of trades in bullion, hovering just above $1,277, barely changed from the end of last week.

Unlike many assets, gold is in a unique position over the U.S.-China trade war. A positive development on that means bullion could benefit from more jewelry and other bullion-related consumption in China, while a negative outcome could bolster gold’s standing as a safe-haven hedge against further weakening in Chinese growth.

But in recent days, the dollar had caught up as a hedge too to the trade war angst. The , which measures the greenback against a basket of six currencies, was nearly flat at 97.82 on Monday, after hitting a two-week high of 97.84 on Friday.

US airlines are set to carry a ...