A slew of Federal Reserve speeches and US jobs numbers for June will channel ‘s energy this week. bulls, meanwhile, stay hopeful of more “goodies” from OPEC+ —more in this case would be a smaller production hike than being bandied about in the market ahead of the producer group’s July meeting.

Regional heads of the Fed, including New York’s , Philadelphia’s Patrick Harker, Atlanta’s and Richmond’s , along with Vice Chairman , will have speaking engagements through the week—setting a busy pre-July 4th week.

Since the Fed’s black-out period for its June meeting ended, its senior most officials have issued speeches often at odds with each other. On any given day, there are just as many suggesting a longer continuance of stimulus and a delayed return to higher interest rates, as there are those demanding a quicker taper of asset buying and rate tightening.

The doves and hawks of Fed policy are expected to send out conflicting smoke signals again this week, setting gold up for another potentially volatile week ahead of Friday’s data for June.

Front-month gold on New York’s Comex finished last week with its first weekly gain in four, since its unceremonious fall from $1,900 levels. 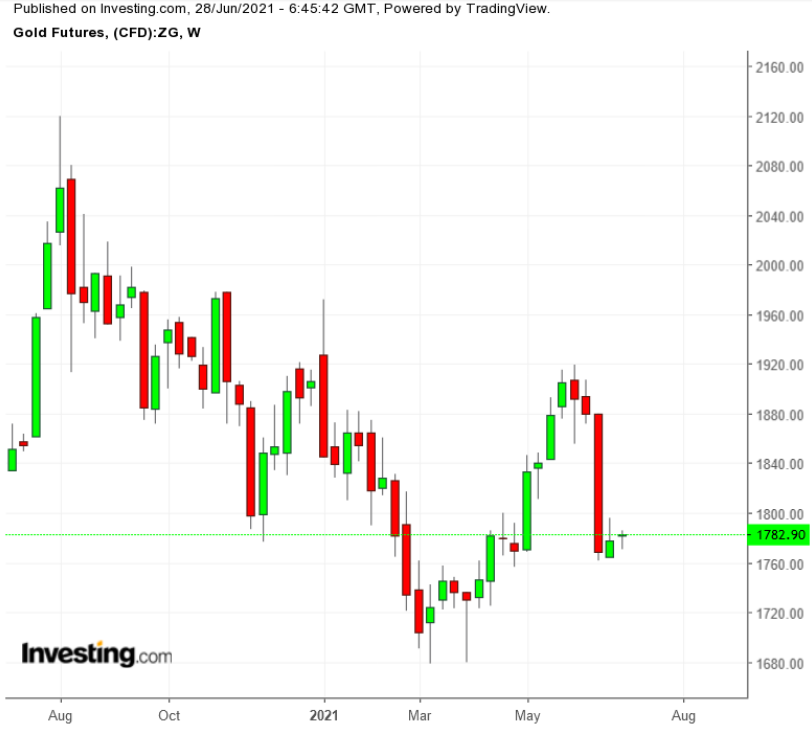 It was a woeful previous three weeks for gold longs, who watched miserably as the benchmark futures contract in the precious metal cascaded from five-month highs of just over $1,919 to a seven-week low of just above $1,761 at one point. That was a loss of almost $160, or more than 8%.

Gold put in a further recovery in Monday’s Asian trading, rising to a session high of $1,783.45.

Halley said, as ever, gold’s fate will be likely decided by other markets, notably the , while its RSI, or Relative Strength Index, moves back into neutral territory, removing one source of support.

“Its failure ahead of the 100-DMA on Friday suggests this week; gold will be more vulnerable to downside risk than last.”

“In the bigger picture, gold needs to complete a daily close above $1800 an ounce or below $1760 an ounce to signal its next directional move. Otherwise, patience is required in a range trader’s market.”

The June jobs report will be the main event of the week, with investors counting on the data to show rapid labor market recovery, after two months of slower than expected jobs growth. The second quarter is ending, and market watchers will be looking ahead to the next six months after a strong first half to 2021.

With concerns over rising inflation and the strength of the recovery to the fore of investors’ minds, markets will also be looking at other labor market statistics, including and labor force .

Last week, Fed Chairman Jerome Powell reiterated the central bank’s commitment to encouraging a “broad and inclusive” recovery in the labor market, adding that there is still a long way to go, and that support is still needed.

“The very quick job gains of the early recovery essentially involved going back to your old job,” Powell had said. “Now it’s actually finding new jobs and that’s a matching function that is more labor intensive and time consuming.”

Ahead of the jobs report, markets will get updates on , , and activity.

The ISM data is likely to underline strains on the supply chain that are pushing up costs, boosting the chances that will remain at higher levels for longer.

The rapid spread of highly contagious COVID virus variants is delaying a return to normality, while the recovery in China, a driver of the global economy, appears to be slowing. Supply chain strains are driving up inflation making it harder for major economies to justify more stimulus, while several emerging market central banks are already hiking rates as a precaution.

Some of these could be positive for gold.

Conviction has become a rare commodity in gold, as the average long investor tried to stay true to the yellow metal through its travails of the past six months.

Since January, gold has been on a tough ride that actually began in August last year—when it came off record highs above $2,000 and meandered for a few months before stumbling into a systemic decay from November, when the first breakthroughs in COVID-19 vaccine efficiencies were announced. At one point, gold raked a near 11-month bottom at under $1,674.

Lately, gold also hasn’t lived up to its billing as a hedge against inflation either.

The key US inflation gauge monitored by the Federal Reserve, the core PCE, or , rose for a third month in a row in May, data showed on Friday. data and the University of Michigan’s closely-followed fell.

Gold’s reaction to all these was anemic.

The 23-nation OPEC+—comprising the 13-member Saudi-led Organization of the Petroleum Exporting Countries and its 10 Russian-steered allies—meets on Thursday amid expectations of a production hike as crude prices proverbially go through the roof. 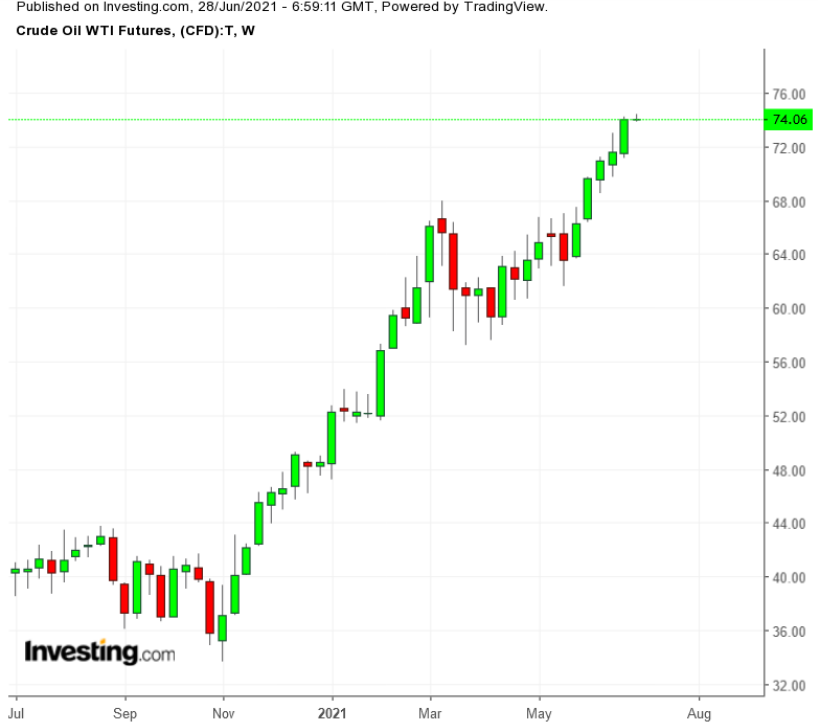 Even Saudi Oil Minister Abdulaziz bin Salman surprised many by acknowledging last week that crude prices may have risen too much, too fast. “We have a role in taming and containing inflation, by making sure that this market doesn’t get out of hand,” he said on Thursday, a week before the upcoming OPEC+ meeting on July 1.

Much will depend on whether the Saudi oil minister, alternatively referred to as AbS by his initials, will allow an OPEC+ output hike large enough to cool the market.

Unless OPEC+ agrees to an August hike of more than 500,000 barrels daily, the crude rally is unlikely to lose its momentum, market sources say.

Since AbS came to office a little less than two years ago, each OPEC+ meeting he’s chaired began with calls for significantly higher production quotas. The minister deftly shot each one down, reminding the output hawks in the group that there was something more important: the price of oil itself. Aside from demand and market share, of course.

As a result of his efforts, compliance to Saudi-led production cuts in OPEC+—a group often known for overpromising and under-delivering—has reached an unbelievable 122% (the additional 22% means they are over-delivering by that much now, though a huge portion of the total cuts come from just one source—Saudi Arabia itself).

AbS’ determination in holding onto cuts—OPEC+ is still withholding almost 6 million barrels of its daily capacity from the market—is evident from the mantra he recites each time he’s asked whether he’s happy about oil demand: “I will believe it when I see it.”

Yes, despite global inventories back at five-year seasonal trends; despite the market virtually draining all of the excess supply from the COVID-triggered glut; despite U.S. drillers pumping 2 million barrels less per day now than before the pandemic; and despite a barrel trading three times higher today than 15 months ago, the Saudi minister is still not convinced about oil demand.

Some analysts observe that counting on the Saudi minister to help reduce oil prices meaningfully while his actual job is to do the opposite, is akin to giving a fox responsibility over a barn of chickens. But the world has no other choice for now, as long-only speculators in oil will not stop what they are doing.

Speaker Trump? He will need to secure ...