Traders in are expected to struggle for direction this week amid the typical Federal Reserve information blackout ahead of its monthly , while those in could be pacing a little gingerly too as Iran could be nearing a deal to export its crude without US sanctions, despite testy negotiations. 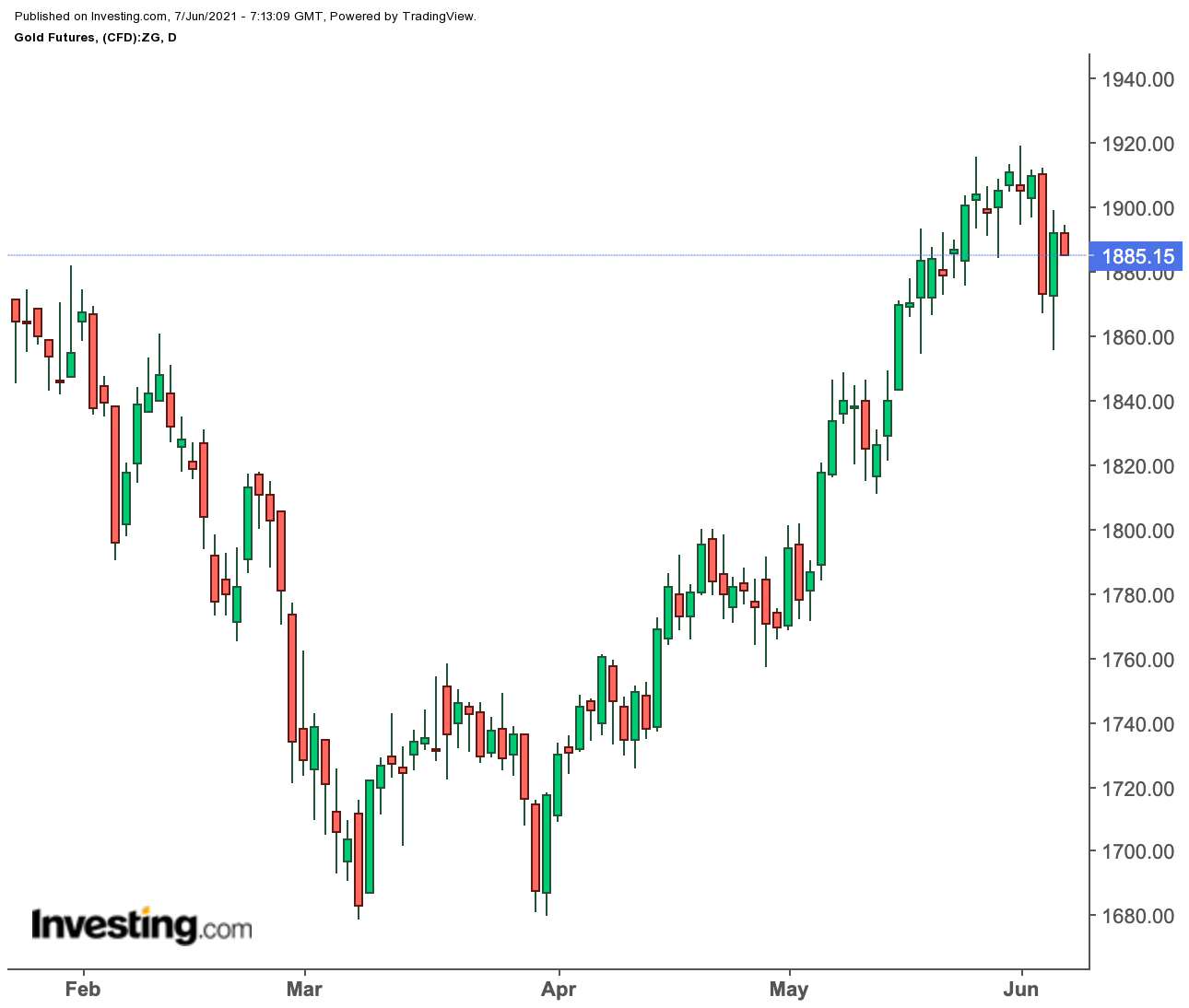 All eyes will be on Thursday’s reading of the US Consumer Price Index, or , for May, after a stronger-than-expected number in April triggered a gold selloff to the low $1,800s.

Aside from CPI and other relevant data, markets are practically worried sick about the incessant chatter on inflation. This is despite the Federal Reserve’s relative indifference to the whole matter, as well as its refusal to act rashly with a rate hike or resort to immediate tapering of asset purchases it has carried out to provide liquidity to markets since the outbreak of the coronavirus pandemic in March 2020.

All things being equal, a higher inflationary environment is good for gold, which is seen as the best store of value in times of both financial and political trouble.

Yet in recent months, gold’s rivals, the and bond yields, have rallied instead on signs of ramping inflation, as investors bet the Fed will hike rates faster than anticipated—something it has sworn against.

The Fed acknowledges the price pressures arising from bottlenecks in US supply chains struggling to cope with demand in an economy reopening after months of pandemic-suppression. But the central bank’s policy-making Federal Open Market Committee, led by Chairman Jerome Powell, insists that these inflationary pressures are “transient” and will fade as the economy makes a full recovery from the pandemic.

Gold was initially weakened on Thursday by weekly US suggesting unemployment is at its lowest since the outbreak of the pandemic.

But within 24 hours, the jobs picture turned again, helping gold claw back some of its losses.

The Labor Department’s for all of May, released Friday, showed that the United States added just 559,000 new jobs—at least 90,000 below economists’ forecasts—although the monthly fell by three percentage points to 5.8%. This suggested that jobs recovery still had some way to go.

At once, talking heads at research houses began espousing the theory that the Fed will be nowhere near to raising interest rates or tapering the $120 billion of bonds and other assets it had been buying monthly.

Gold enters this week back under the key $1,900 perch it had occupied the previous week amid the radio silence that Fed bankers typically display ahead of the central bank’s June 15-16 monthly policy meeting.

The CPI is one of the last major US economic data releases scheduled ahead of the Fed meeting. If it turns out to be surprisingly stronger than forecast, it could once again galvanize the market’s focus on inflation, despite the Fed’s best efforts to navigate the conversation away from it. Economists tracked by Investing.com expect a monthly growth of 0.4% for May CPI and an of 4.7%.

Should the numbers stay within forecast, the Fed will be able to argue that no change—or even talk of change—in monetary policy is required at its June meeting, Jeffrey Halley, Asia-Pacific research head at online broker OANDA, wrote in his opening blog for the week.

But such an action will barely pacify a larger portion of the market, including the gold trade, rattled by US yields hovering around 1.6% and threatening to go back above 1.7% and beyond.

“Once the pandemic supply chain bottlenecks are cleared, will a return to the mean occur?” Halley asked in his blog.

“Despite the noise and the chest-thumping from both sides of the ring, the honest answer is we just don’t know if price stresses will ease around the world towards the end of the year.”

In oil’s case, crude prices were down in Monday’s early trade in Asia despite US benchmark, the West Texas Intermediate, hitting a 32-month high of $70 per barrel. 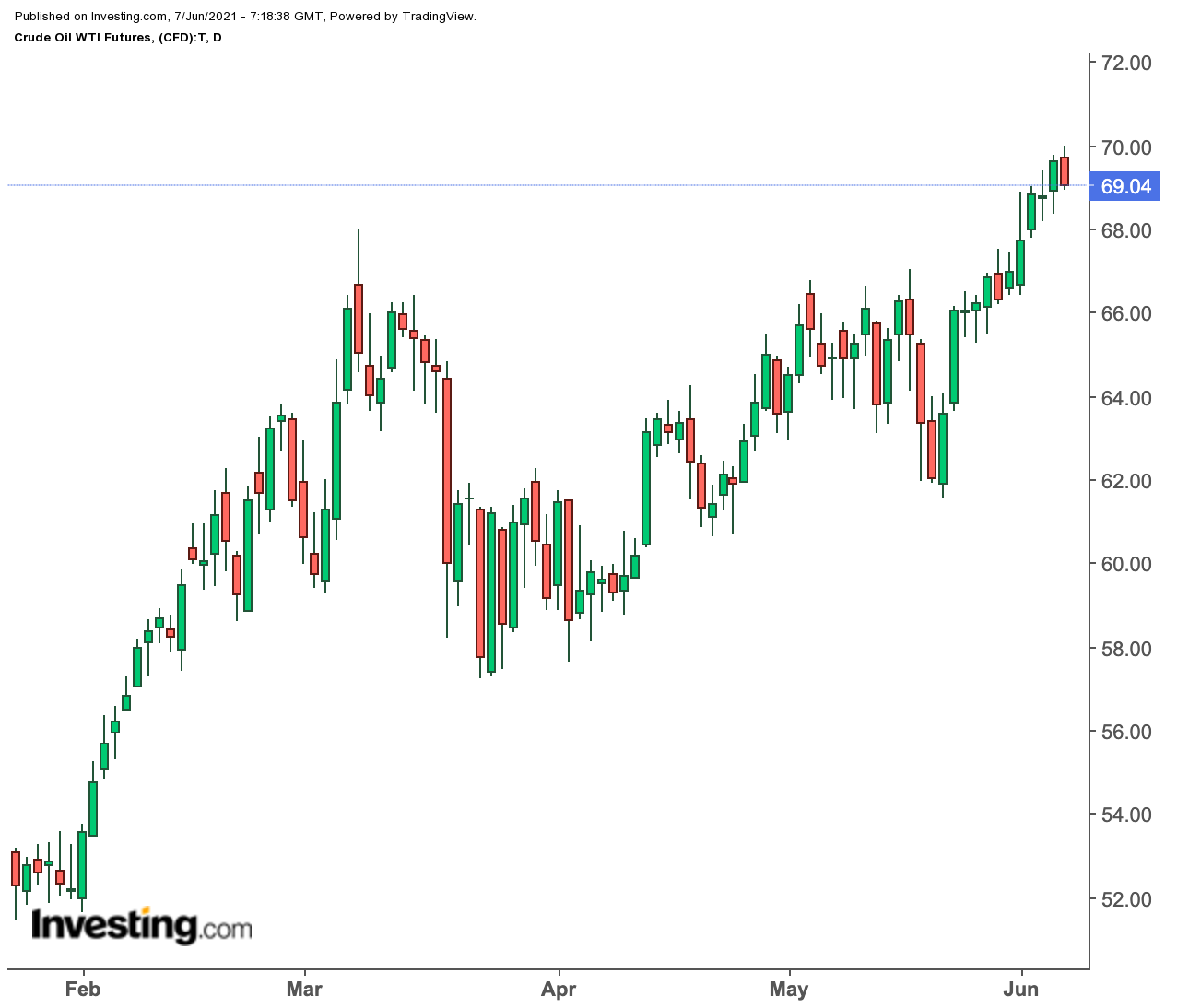 Iran and global powers will enter a fifth round of talks on June 10 in Vienna that could include Washington lifting economic sanctions on Iranian oil exports.

While the European Union envoy coordinating the negotiations had said he believed a deal would be struck at this week’s talks, Reuters quoted other senior diplomats as saying that  the most difficult decisions still lie ahead.

Analysts expect Iran, which will have its presidential election on June 18, to increase production of its crude by 500,000 to 1 million barrels per day once sanctions are lifted.