The political football over another COVID economic aid package will continue on Capitol Hill this week, with neither side appearing ready to concede, but each yet quick to call out symbolic wins—leaving markets from gold to oil and stocks hanging on hopes of a deal that may only materialize beyond the Nov. 3 U.S. election.

More back and forths over the latest $1.8 trillion price tag occurred over the weekend, with every notable Republican and Democrat from Senate Majority Leader Mitch McConnell to House Speaker Nancy Pelosi citing little real progress in the talks.

“With markets now totally ignoring the possibility of a fiscal stimulus package not happening and (yet) piling into the buy-everything trade, the correction if negotiations fall apart could be something to behold.”

Friday’s restart of COVID-19 relief talks were what brought gold to a positive close for a second straight week.

hovered at under $1,935 per ounce in early afternoon Asian trading in Singapore on Monday, little changed from Friday’s settlement, as the remained tame also. Gold futures rose about 1% last week, after the previous week’s gain of 2.2%. 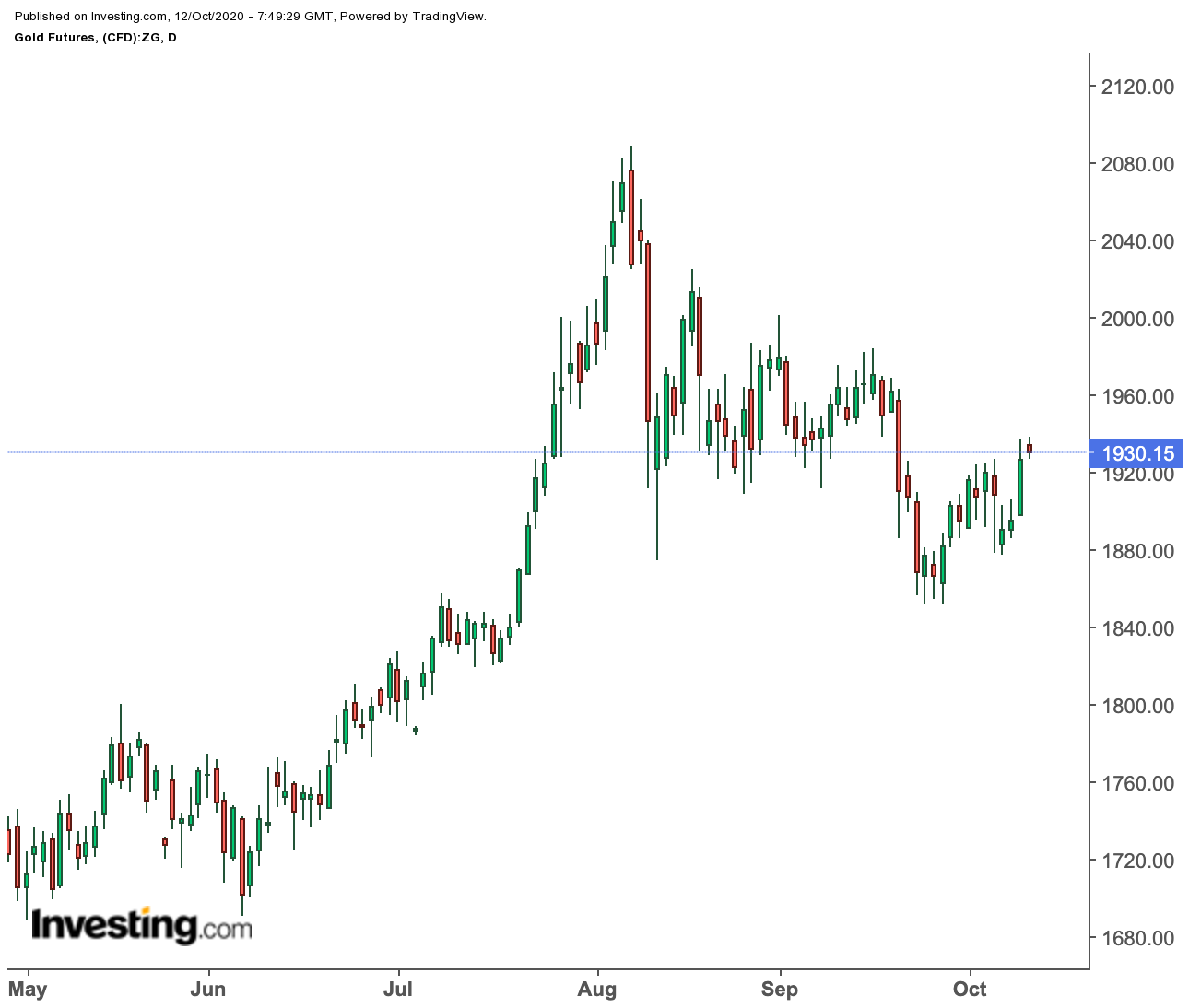 Without Stimulus Talks, Fed Could Lend Some Direction

Fed Vice Chairs Richard and Randal are also both due to speak Wednesday and Thursday at an event on the sidelines of the IMF meetings.

On the data front, the U.S. is expected to release figures on Tuesday and the report is due on Thursday. While last week’s level of new was the lowest since March, they remain stalled at historically high levels after dropping below 1 million in August. Friday will see figures for September along with data on and .

Despite the remote chance for immediate passage of a new U.S. coronavirus bill through Congress, risk appetite remained fairly resilient as the new week began, due to the Trump administration’s continued rhetoric in pushing for what it wants as a deal.

In a letter to Congress on Sunday, White House Chief of Staff Mark Meadows and Treasury Secretary Steven Mnuchin asked lawmakers to initially pass legislation allowing the Trump administration to redirect about $130 billion in unused funding from the Paycheck Protection Program intended for small businesses, while negotiations continue on a broader relief effort.

That, of course, wouldn’t fly with House Speaker Pelosi, who has rejected stand-alone legislation in favor of a comprehensive package to address the economic and health consequences of the pandemic.

White House Economic Adviser Larry Kudlow kept alive President Trump’s bigger-is-better spin on the stimulus by suggesting Treasury Secretary Mnuchin may actually increase the $1.8 trillion offered by the administration—even as Senate Majority Leader McConnell says he doesn’t have enough votes for a package worth far less than that.

South Carolina Senator Lindsay {0|Graham}}, a confidant and golfing buddy of the president, also says Trump is “right” in wanting a larger stimulus package—never mind that he refused less than a week earlier to even deal with the Democrats.

Trump Hopes To Deliver Something

With just weeks to the presidential election, Trump hopes to deliver something good for potentially undecided voters. That—and tanking markets—were what convinced the president to swing from a no-deal to must-conclude position on the stimulus. More than the markets, millions of jobless Americans need help right away, while tens of thousands of airline workers need paycheck assistance if they are to avoid joining the ranks of the unemployed.

Yet, McConnell, Trump’s chief ally in the Senate, isn’t willing to play ball with the president on the stimulus, ostensibly because he has his eyes somewhere else: the scheduled hearing and confirmation of Supreme Court nominee Amy Coney Barrett from Monday. Talk about mixed priorities.

It remains to be seen whether Trump will be able to use his persuasion, or raw power, over McConnell to achieve a double at the Senate this week. On the flip side, it will be easy for the stimulus deal to fail again, considering that the Democrats’ demand itself is for a deal of at least $2 trillion.

Oil was propped up last week by government data showing that nearly 92% of oil production and almost 62% of gas output in the U.S. Gulf Coast of Mexico has been shut as precaution ahead of Hurricane Delta. 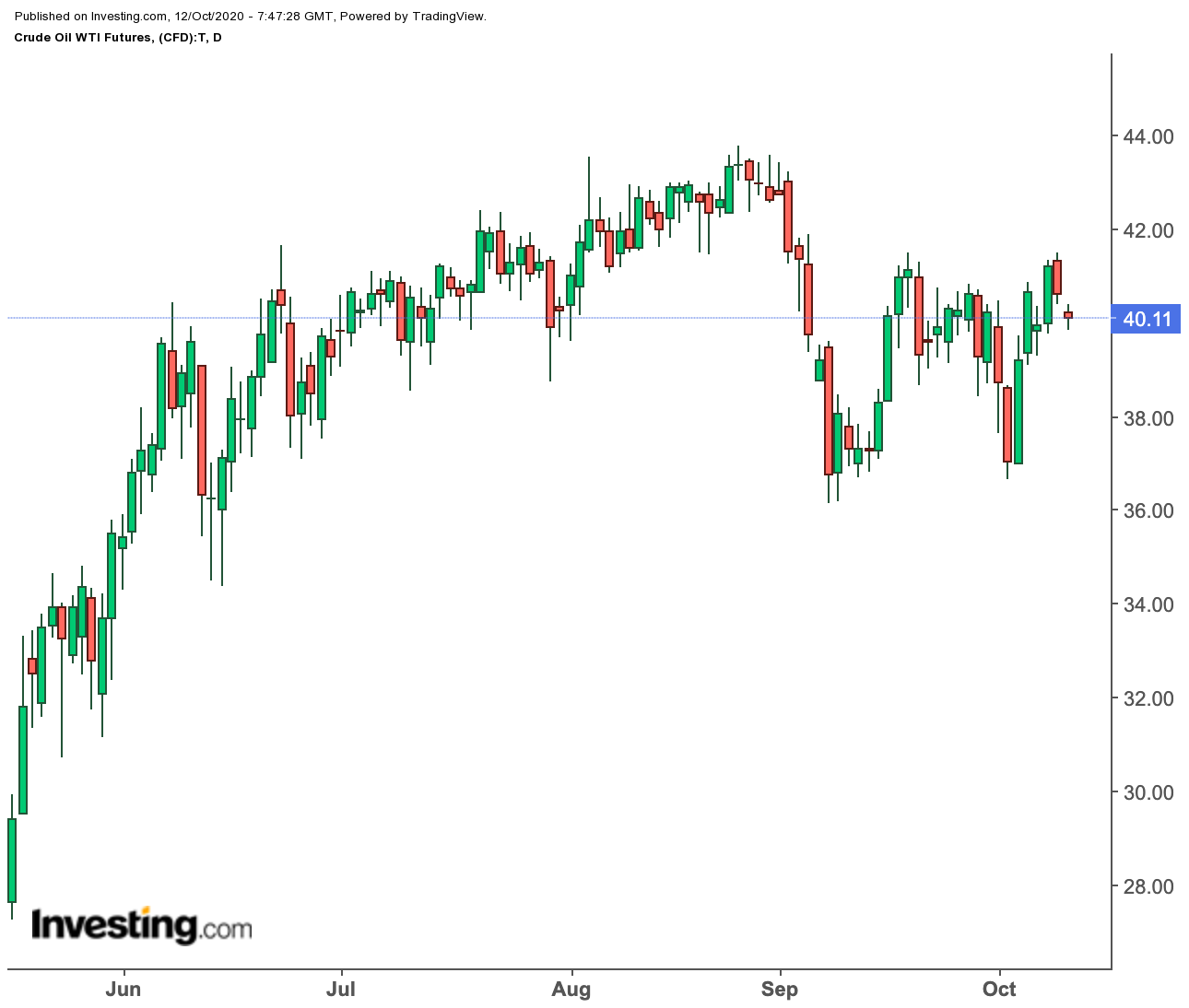 But with the Norwegian Oil and Gas Association and industry union, Lederne reaching an agreement Friday to end the in the Scandinavian state, market bulls may need to find a bigger price mover in the week ahead.

The other uncertainty hanging over oil: the election as recent polls indicated Democratic candidate Joe Biden is increasing his lead.

“Positioning from CTAs in the market is very short currently and additional macro shorts may have added some support into a market as it’s pretty clear that the pain trade was/is up as COVID is worsening,” said Scott Shelton, energy futures broker at ICAP in Durham, North Carolina.

“The U.S. elections are turning into a carnival and quite frankly, the oil fundamentals look pretty dire.”