The Federal Reserve holds the keys this week to the dollar and, by its extension, gold.

Geopolitics have also reared their head the first time in months to give the safe-haven a boost after the Politico news site reported that Iran was planning to retaliate against the United States, eight months after the killing of its top general Qasem Soleimani.

Oil, meanwhile, appeared to have stalled a deeper slide beneath $40 per barrel on reports about , the second storm in less than a month headed toward energy platforms in the U.S. Gulf Coast of Mexico, after Hurricane Laura on Aug. 26. 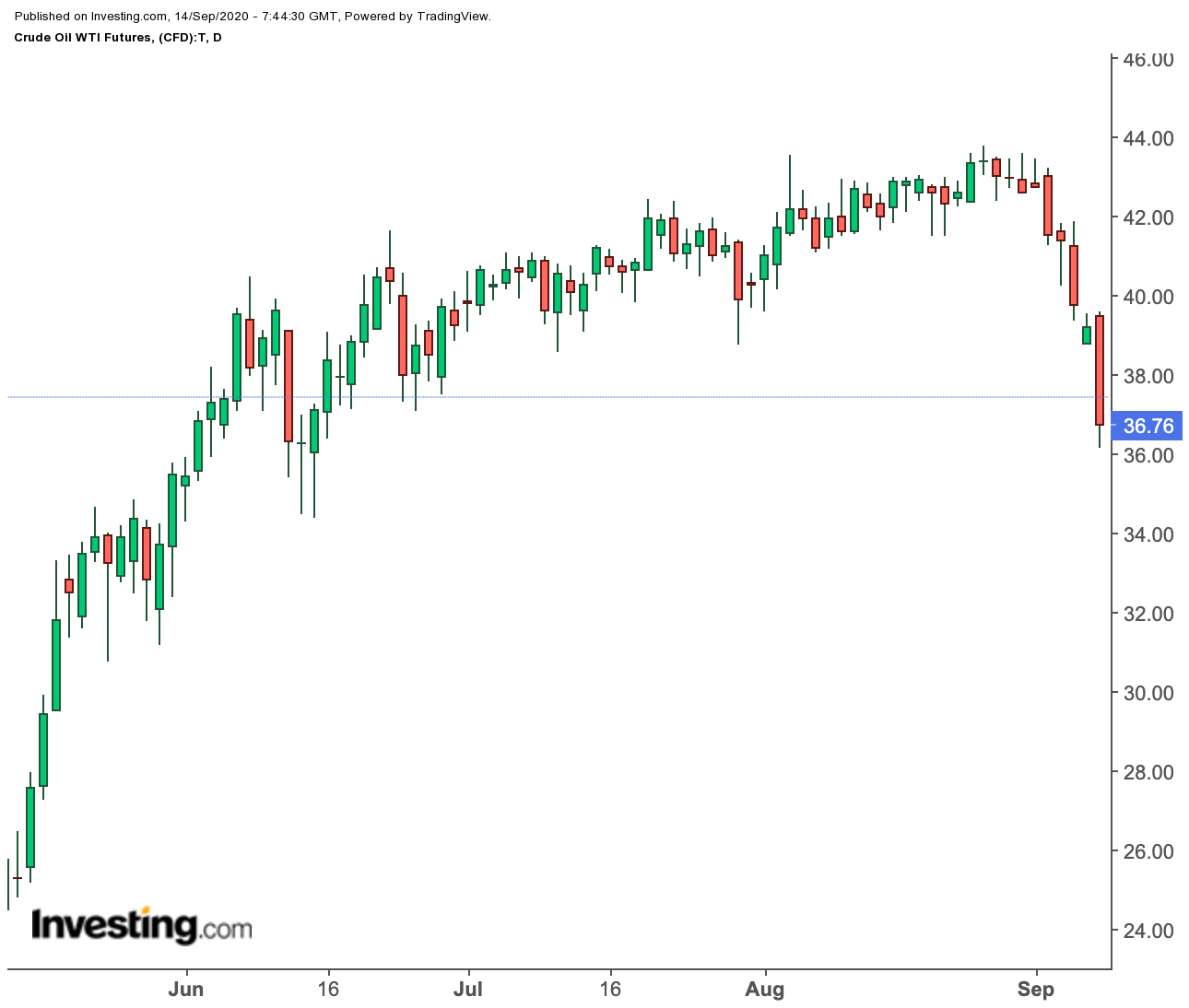 Also keeping crude in the positive were expectations that Saudi Arabia and Russia might use Thursday’s OPEC+ to address worries about an oversupplied market. Although some analysts were of the opinion that the Saudi-steered and Russia-assisted alliance won’t be able to do enough to prevent another test of oil’s lows in the mid-$30s.

“OPEC+’s virtual meeting this week will be a fraught one,” said Jeffrey Halley, a Sydney-based analyst for New York’s online trading platform OANDA.

“An abundance of supply, the possible return of Libyan exports, member compliance and a softer demand outlook, will unsettle the grouping.”

“I doubt that OPEC+ will “blink” this week and signal a move back to higher production cuts, the will just isn’t there. Assuming that as a base case, oil prices are vulnerable to deeper downward corrections this week.”

In ’s case, Halley noted that while the yellow metal had weathered the storm of an equity sell-off last week, the attention of investors was elsewhere.

“It is likely that status quo will continue until the FOMC meeting passes on Wednesday evening, and we have more visibility on monetary policy and the direction of the US Dollar,” he said, referring to the Fed’s Federal Open Market Committee {{ecl-168||meeting} between Tuesday and Wednesday.

While U.S. interest rates themselves won’t be any news at this week’s Fed meeting—with the central bank looking most comfortable with its zero to 0.25% holding rate—at his on Wednesday, Chairman Jay Powell will likely revisit the central bank’s mission of

If Powell does that, then the , which serves as an alternate trade to gold, should move lower, giving the yellow metal a bid. The index, which pits the greenback against six major currencies, particularly the , was down 0.26% in Monday’s Asian trade, although it held above its bullish 93-handle.

The dollar slid as COVID-19 vaccine optimism lifted equity markets. Wall Street’s futures rose 1.3% ahead of the opening of Monday’s session in New York. Stocks took off as AstraZeneca (NYSE:) and Oxford University announced over the weekend that they were set to resume coronavirus vaccine clinical trials in the UK, after a week’s pause due to safety concerns.

Gold chartist Dhwani Mehta noted in a post on FXStreet that bullion charted a descending triangle breakout on the one-hour chart, after closing above the falling trendline (pattern) resistance at $1,949.

“The next barrier on buyers’ radar is the Friday high of $1955, a break above which will put $1,960 at risk,” Mehta wrote. “Buying interest could accelerate above the latter, opening doors towards Thursday’s high of $1966 en route the pattern target at $1,978. The hourly Relative Strength Index has turned flat, still holds above the midline, allowing for more gains.”

Charts show that spot gold needs to get to at least $1,968 to recover some of the frenetic momentum that took it to last month’s record highs. 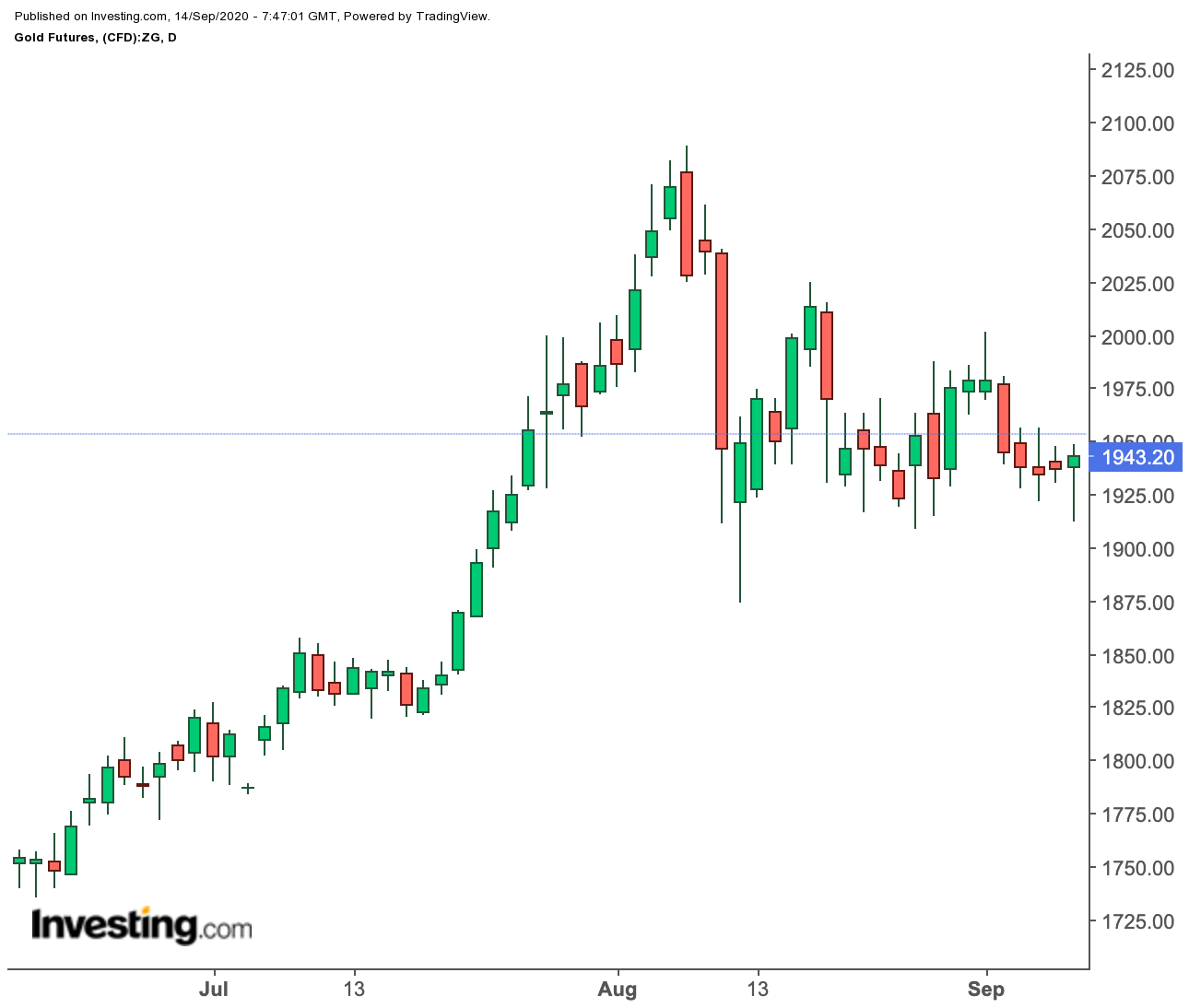 “The market’s reaction to $1,968 will give guidance on the further course of action,” said gold chartist Sunil Kumar Dixit. “But gold actually needs to close above $1,973 and cross above $1,993 to resume the bullish momentum.”

On the oil front, the Saudis and the Russians will chair a monitoring meeting on Thursday to assess whether OPEC+ production cuts, which they started scaling back in August, were still staving off an oil glut.

Oil prices steadied as Tropical Storm Sally gained in strength in the Gulf of Mexico west of Florida on Sunday and was poised to become a category 2 hurricane. The storm is disrupting oil production for the second time in less than a month, after hurricane Laura swept through the region.

While a hurricane would typically give a measurable boost to crude prices with the shutdown forced on oil production platforms, the coronavirus pandemic has distorted this dynamic by hitting demand for fuel as well. That has limited gains on both WTI and Brent.

After reviving crude prices from an unprecedented collapse over the spring, OPEC+ is seeing the recovery for oil stall and fuel demand falter as the deadly pandemic surges once again. Both WTI and Brent slipped below $40 a barrel last week, the first time since June.

Complicating the oil supply situation are some OPEC+ exporters producing above quota, including the alliance’s bigwig Russia.

If that’s not enough of a dilemma for the Saudis, renegade Libyan general Khalifa Haftar has committed to ending the North African country’s blockade on oil, meaning even more supply — up to one million barrels per day — could hit the market in due course. Haftar’s move might be good for Libya’s civil liberty. But it’s certainly not great news for OPEC and crude right now.

Why The Buffett Factor And Tightening Financing ...

Conservatives call on Obamas to use Netflix ...