With many balls up in the air in the final week before the presidential election, risk aversion—or at best, caution—is gripping markets, prompting traders to take refuge in an asset they’ve felt safe in since the summer: the dollar.

The White House and Capitol Hill confirmed Friday what the gold market had suspected for weeks—that there wasn’t going to be a COVID-19 stimulus deal before the Nov. 3 election. Yet, gold traders had played along as the talking heads in the Trump administration and Congress babbled for nearly a month about a possible relief agreement.

Dollar In Play As U.S. Presidency Up For Grabs

With that uncertainty over—but lots of others remaining including whether Joe Biden would indeed wrest the presidency from Donald Trump—macro traders were making a beeline for the dollar.

The , which pits the greenback against six major currencies, was up 0.2% at 92.94 by Monday’s lunch-hour in Asia for only its second positive session in seven days. 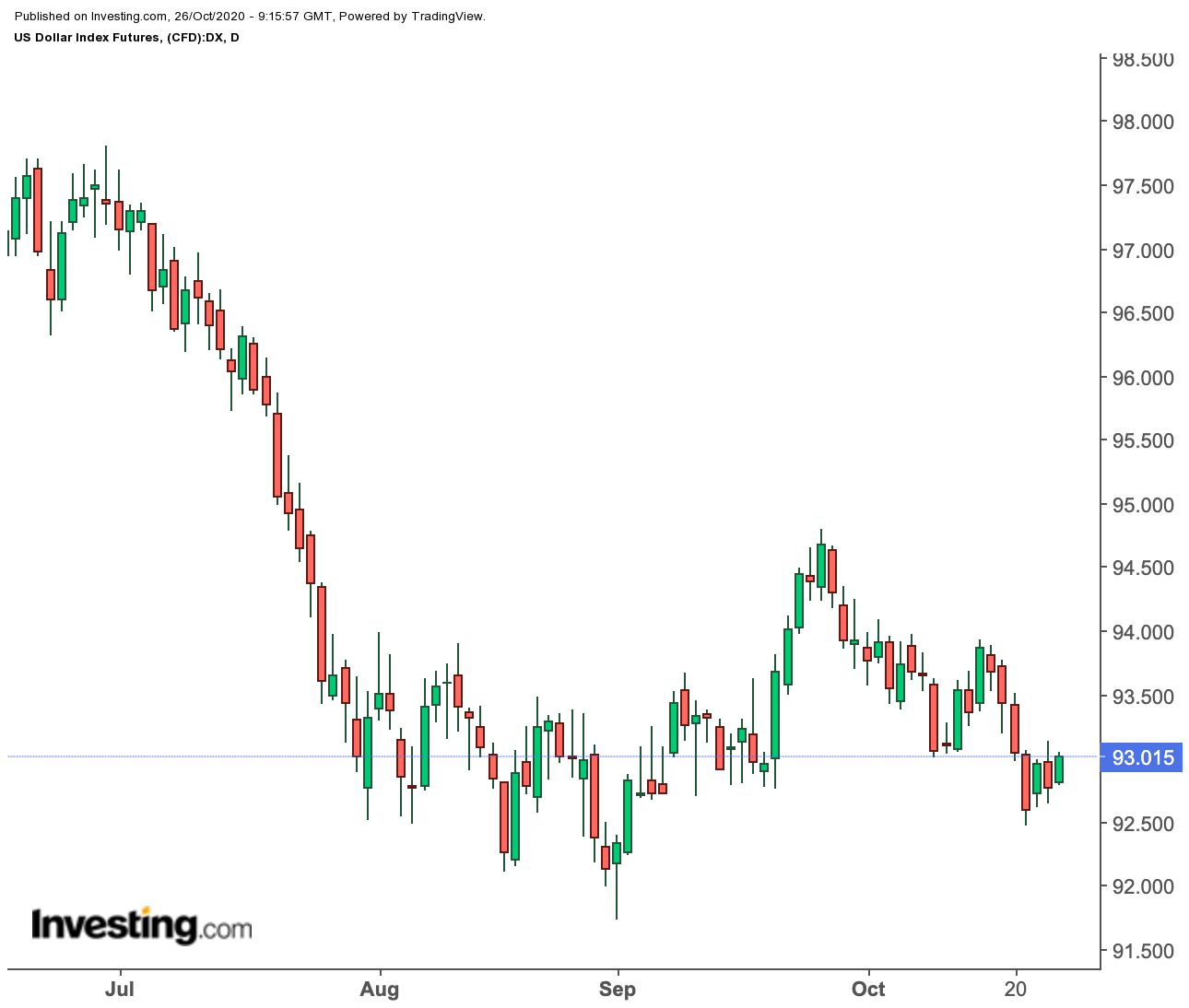 The strength of the dollar weighed on gold, pushing it below the key bullish point of $1,900 per ounce.

U.S. for December delivery hit a session low of $1,892.60, down 0.3%. But some were certain of a rebound later in the day—and possibly a late-week rally—on speculation over a Biden win and post-election talks of a COVID-19 stimulus. 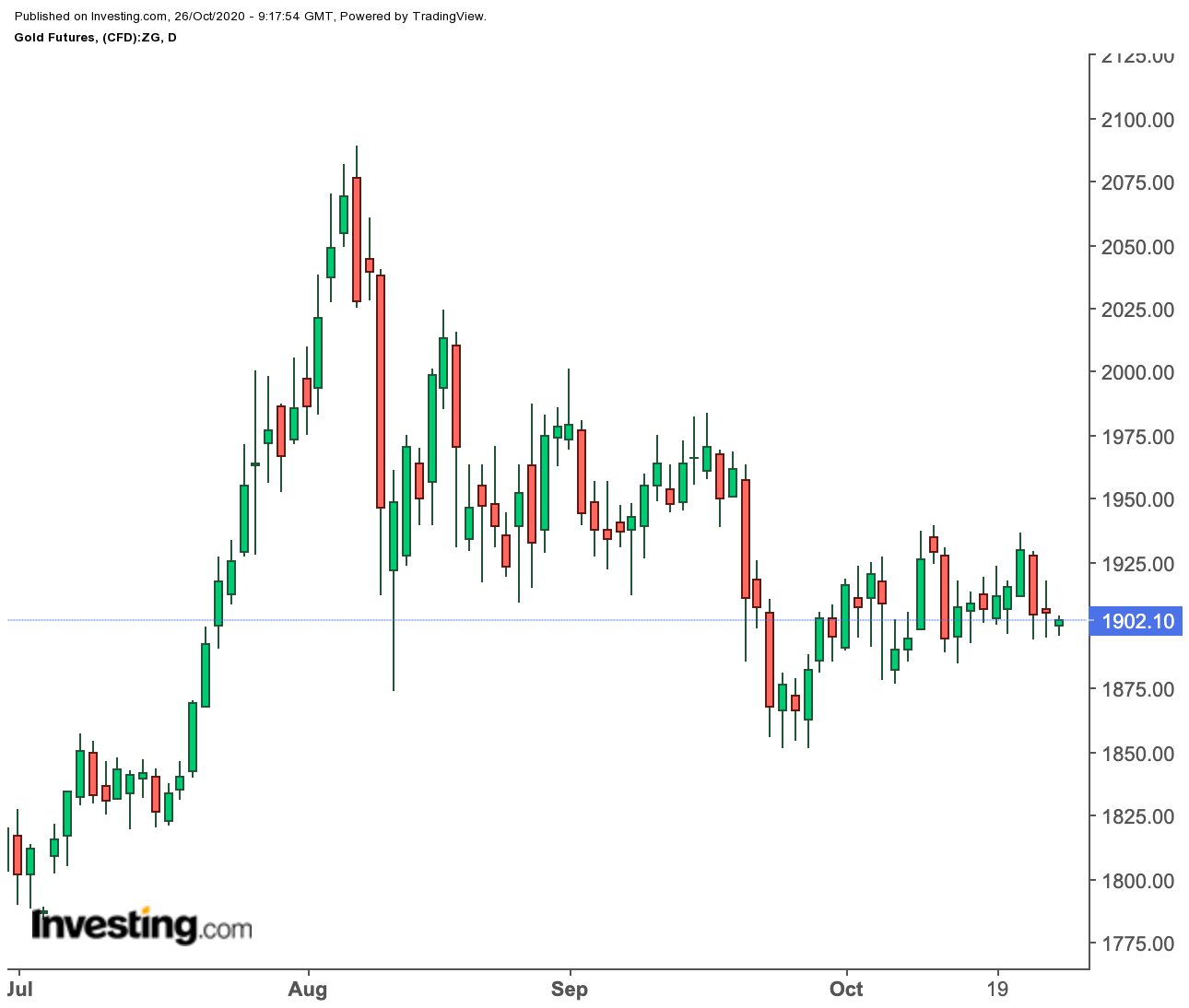 “The USD has benefited significantly from President Trump’s policy mix of aggressive fiscal stimulus at home and trade protectionism abroad. This could come to an end if a Democratic president is elected.”

And regardless who wins the election, analysts are also certain that a relief package needs to be executed as soon as possible.

And that stimulus—free of election politics—could be huge. Focus is returning to the growing financial cost of the pandemic and what might be needed to start sending checks out again to unemployed Americans, keep small-and-medium businesses funded and thousands of airline and other workers on the payroll. No one has any idea what the number will be. But it wouldn’t be amiss to think it will be as much or more than the original $3 trillion disbursed in combined relief issued between March and April.

”History shows that almost every government struggling with instability does the same thing: Spend money.”

While equities are likely to surge across the board once the stimulus is known, on the commodities front, the case for gold is particularly “overwhelming,” said Button.

“We’re still in a seasonally weak spot but if there’s some weakness in November, it will be time to buy,” Button added, referring to the yellow metal’s failure to cross the key $1,950 per ounce last month.

“If not, buy in December at any price. I mean, does this look like a top to anyone? It looks ready to explode.”

Traders will also be on the lookout for U.S. third quarter data on Thursday to gauge recovery since the record 31.4% plunge in Q2. Forecasts are calling for an equally robust growth of 31.9% in June. If the figure disappoints, the dollar will almost surely tumble, pushing gold higher.

On the oil front, OPEC’s mind games weighed on sentiment. In July, the group announced rollbacks in production cuts, before a steady deterioration in demand began. Neither Saudi Arabia, which dominates the group, nor Russia, which serves as its biggest ally, has made clear if the changes were off or merely postponed till the year end.

Adding to the bleak outlook for oil, was the of coronavirus at the weekend, with caseloads reaching a new daily record of more than 83,000. The outbreak also peaked in France, hitting more than 50,000 cases on Sunday.

And on the supply side Reuters reported that Libya’s National Oil Corp ended its force majeure on exports from two key ports on Friday and said production would reach 1 million barrels per day (bpd) in four weeks, quicker than thought.

“The recent surge in COVID-19 cases and further movement restrictions across parts of Europe is weighing on sentiment, with concern over what this all means for demand,” ING Economics said in a note. “Not helping, is the fact that Libya appears to be returning supply to the market quicker than expected.”

Disclaimer: Barani Krishnan does not have a position in the commodities or securities he writes about.

Kamala Harris thinks she can laugh her ...