Commodities Week Ahead: Gold, Oil In Delicate Dance Ahead Of Fed

It’s Fed week, so anything goes as far as the trade of commodities to stocks, forex and Treasuries are concerned. But in the end, the Federal Reserve’s impact on , and other natural resource markets isn’t likely to be very different from what it has been for months, if reading the tea leaves on the central bank is right. 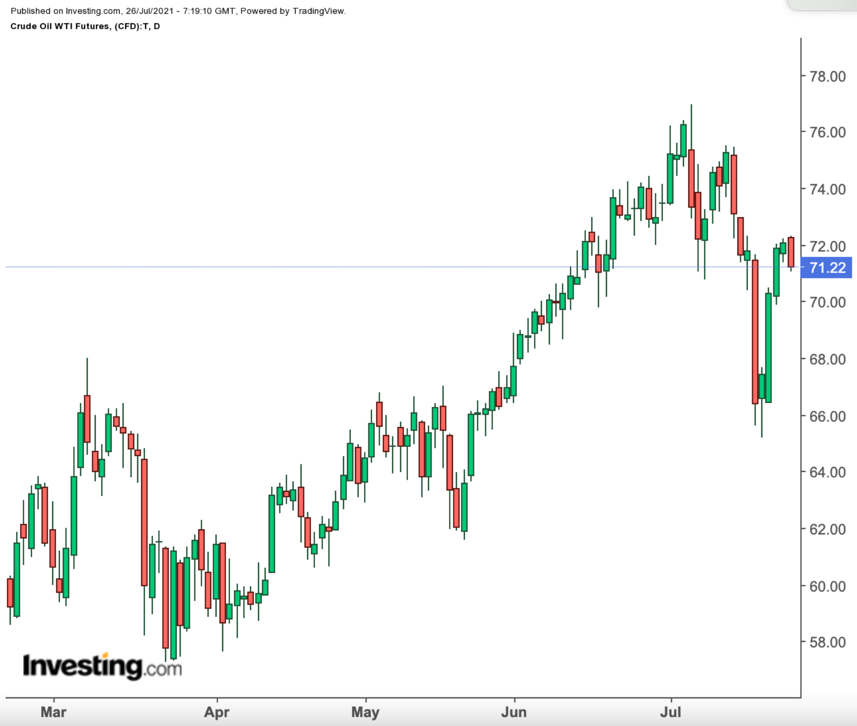 It’s set to be a busy week for markets with the Fed’s , along with Chairman Jerome Powell’s , on Wednesday.

The Fed aside, on Thursday, investors will also get a first look at second-quarter US Gross Domestic Product (), which is expected to show the peak of post-pandemic recovery.

Meanwhile, on Friday, the eurozone is to release a slew of data, including reports on , and .

Gold futures were up in Monday’s lunch hour in Singapore, trading up 0.4% at above $1,808 an ounce, as investors looked ahead to the Fed’s two-day meeting beginning Tuesday. 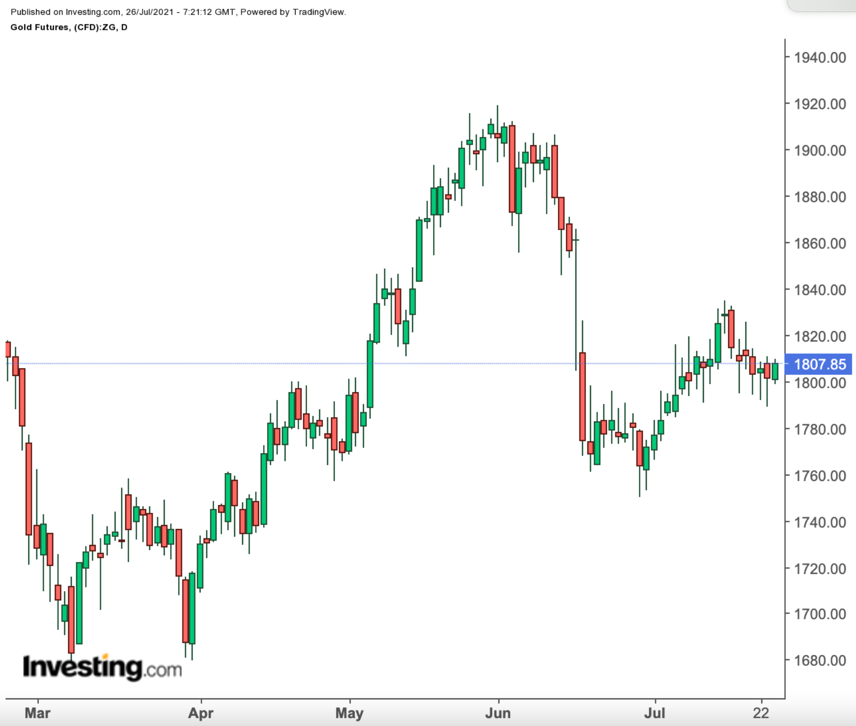 Gold longs, clinging by their fingernails to $1,800 territory, saw their first weekly loss in five last week as the yellow metal remained disconnected from expectations of steady inflation in the United States.

In oil, futures of US West Texas Intermediate crude and London’s were both down about 1% each.

Oil managed to eke out a gain last week after the worst tumble in 16 months that left longs in the market shaken but unscathed.

Analysts said what oil bulls need to hope for in the coming weeks is that the consumption of US does not let up in a significant way to allow reports of increased COVID-19 cases to usurp the demand narrative for crude.

The Fed’s all-important Federal Open Market Committee isn’t expected to make any policy changes for July, although more details will likely emerge on the tapering discussions that started in June.

‘Push and Pull,’ ‘Clear Conflict’ Over What Fed Will Say On Tapering

Chris Zaccarelli, chief investment officer at Independent Advisor Alliance in Charlotte, North Carolina, said there was certainly unease over what the central bank could say on tapering.

“There’s a strong difference of opinion as to whether the future’s bright or whether there are clouds on the horizon.”

The Fed’s policy statement will be scrutinized for any mention of the timeframe for tapering its asset purchase program, although Powell made it clear in his recent testimony to Congress that the US economy still needs the central bank’s full support.

In June, policymakers began debating when to start cutting monthly purchases of $120 billion of Treasuries and mortgage-backed securities.

Powell may indicate that while a discussion on tapering has started, there is still time before officials reach a conclusion on what they will do. Policymakers are expected to highlight the risk from the rapidly spreading Delta variant, which investors worry could derail the economic recovery.

Most analysts expect the Fed to give a clearer indication of its plans for scaling back its quantitative easing program at its annual conference in Jackson Hole, Wyoming, in late August, before a formal announcement on tapering later in the year.

Aside from the Fed meeting, investors will get an update on the strength of the US economy with an end-of-month data dump.

Monday sees figures on , which are expected to hit new highs, followed by and on Tuesday.

The highlight is on Thursday with a first look at second quarter GDP and while expectations have been trimmed back in recent weeks, growth is still expected to be strong at 8.6% annualized. This would mark the recovery of all the lost output caused by the pandemic.

Figures on and are due Friday, which include the Fed’s rumored favorite measure of inflation—the .

In the eurozone, second quarter GDP data on Friday will give investors some insight into the strength of the bloc’s economic recovery from a double dip recession as vaccinations pick up.

Meanwhile, inflation figures the same day are expected to show inflation hit the European Central Bank’s 2% target in July. The ECB has said inflation may be allowed to temporarily exceed its target when “especially forceful or persistent” monetary support is needed.

Last Thursday ECB President Christine Lagarde said that a fresh wave of the coronavirus pandemic could pose a risk to the eurozone’s economic recovery after the bank hinted at an even longer period of monetary support at its latest policy meeting.

Gold Continues in Sideways Trend as The ...