The ante over the stimulus fight in the U.S. Congress looks set to reach new heights, re-energizing markets from gold to equities, as House Speaker Nancy Pelosi tells the White House to get it done by Tuesday—or forget it till the election’s over.

Since she issued the 48-hour ultimatum on Saturday, Pelosi and Treasury Secretary Steven Mnuchin have worked the phones to try and shape a package agreeable to all sides to help millions of financially-distressed Americans as the COVID-19 pandemic wages on with no end in sight.

Congress, led by Pelosi and the Democrats, approved a Coronavirus Aid, Relief and Economic Security (CARES) stimulus in March, dispensing roughly $3 trillion as paycheck protection for workers, loans and grants for businesses and other personal aid for qualifying citizens and residents.

Since then Democrats have been locked in a stalemate with Republicans, who control the U.S. Senate, on a successive package to the CARES, arguing over the size of the next relief, as thousands of Americans, particularly those in the airlines sector, risk losing their jobs without further aid.

Gold prices rose while those of oil fell slightly in Monday’s Asian trading as traders eyed the stimulus talks with hope but not too much optimism. were also up ahead of the New York session, indicating a positive welcome by equity traders.

Jeffrey Halley, a Sydney-based analyst for New York’s OANDA, wrote in a commentary:

“Markets, for now, are merely relieved that at least the two sides continue to talk.”

“Nor do they seem concerned that U.S. Senate Republicans seem unlikely to pass a massive stimulus bill, as they seek … some clear air between themselves and a President well behind in the polls.”

With just over two weeks to the Nov. 3 election, President Donald Trump trails Democrat challenger Joe Biden in most polls. A preliminary agreement over the stimulus could be a positive talking point for the president in his campaigning.

Among commodities, gold is most sensitive to any chance of stimulus being passed.

on New York’s COMEX hit 10-week lows of $1,851 an ounce in September and has been trapped in a range below $1,950 since on the back-and-forth over the stimulus talks. COMEX gold hit record highs of nearly $2,090 in early August as speculation of an imminent deal for a COVID-19 was at its peak. 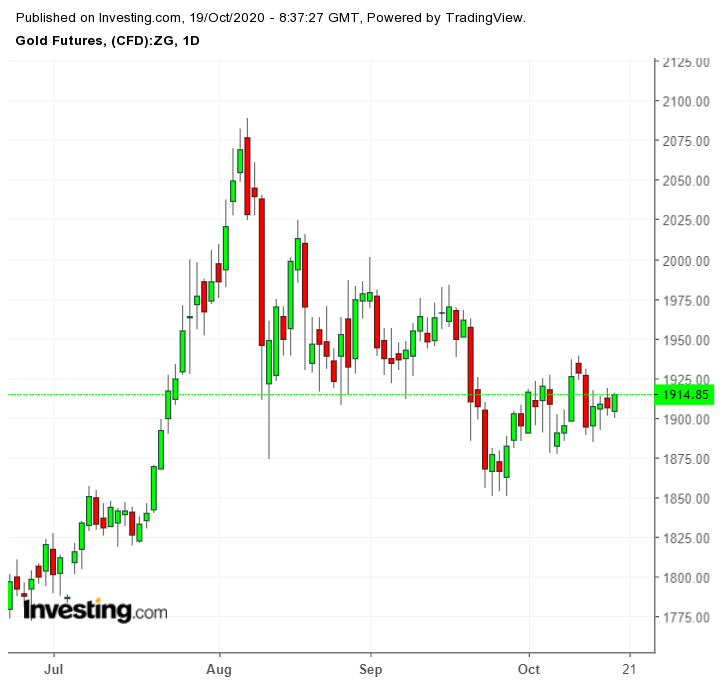 With December gold crossing $1,910 in Monday’s Asian trading, its next technical target is $1915—the intersection of the Fibonacci retracement of 61.8% from its previous one-week low.

But if Pelosi and Mnuchin say they’ve hit another wall on the talks, expect another sharp tumble in the price.

“Alternatively, sellers aim for $1897. A sharp sell-off could be triggered below the latter, opening floors for a test of $1883, powerful support comprising of the previous week low and Fibonacci 23.6% one-month.”

Halley concurs on the low but also puts a high above $1,920 if the talks continue to generate a positive buzz.

“Which way the breakout will occur seems likely to be determined by the U.S. stimulus negotiations and the likely outcome of the U.S. election. Given the market is pricing in both a package and a Democrat clean sweep, that would suggest lower for gold.”

Yet, things may not work out as simply, Halley said, adding:

“I feel the risks are evenly balanced for haven-derived buying ahead of the U.S. elections to push gold higher potentially. Along with the U.S. Dollar, gold should be another beneficiary of investor risk hedging as November 3rd gets closer.”

Dollar A Wild Card, Oil In A Bind

The , which pits the greenback against six major currencies, was up 0.1% on Monday at 93.73. Typically, the dollar moves in the opposite direction to gold, although the two were also in positive territory on Thursday. Such correlation makes it hard for traders to make a precise call on how the yellow metal could go.

While gold prices may be restrained since falling off August’s highs, they remain up almost 25% on the year, making them one of the year’s best-performing commodities. 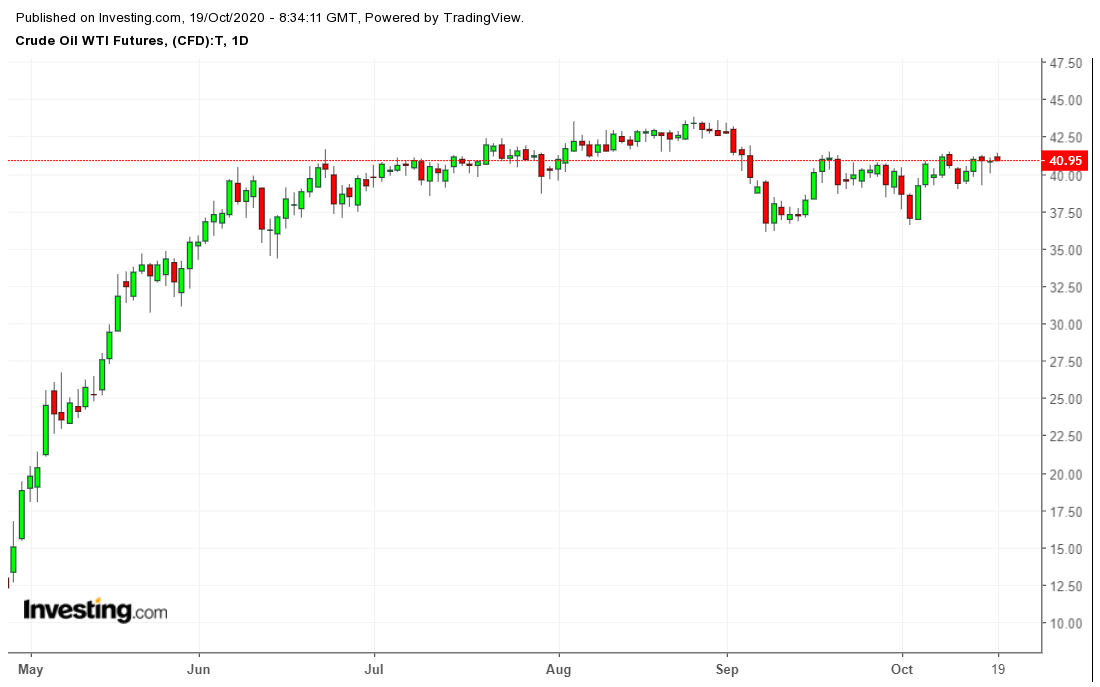 Global , which ballooned in the second quarter as fuel demand collapsed, are currently falling at a clip of around 3 million barrels a day, Gunvor chief executive Torbjorn Tornqvist told Bloomberg in an interview published on Thursday. have fallen in all but two of the past 12 weeks, and last week’s declines were considerably sharper than expected.

But while the U.S. drawdowns looked good for supply-demand optics, there were also concerns they could be distorted by precautionary reactions related to the shutdowns forced by Hurricane Delta, which struck Louisiana on Monday as a Category 2 storm. Nearly 92% of all oil production in the U.S. Gulf of Mexico was shuttered by Delta. With most of those facilities having reopened since, output and stockpiles could rise again in coming weeks.

Last week’s global spike in COVID-19 caseloads has also raised alarm across markets. Infections in Italy again moved near the danger zone last seen in March, while the U.K. and France imposed new movement restrictions. In the U.S, new cases are up in 39 of the 50 U.S. states.

During a technical meeting this week, the OPEC+ alliance of global oil producers expressed concern that oil demand hasn’t picked up as quickly as expected in the third quarter.

OPEC+ oil ministers said producers were unlikely to taper production cuts of 7.7 million barrels per day at the start of 2021 when they are expected to ease to 5.7 million bpd. OPEC+ ministers will make their decision on whether to allow the 2 million bpd production hike to be postponed when they meet Nov. 30-Dec. 1.