longs who loaded up at above $1,900 an ounce might be between a rock and a hard place this week. Just as perilous could be the case of oil bulls, with crude’s rally above $50 per barrel facing a serious threat from China’s first COVID-19 lockdown in months. 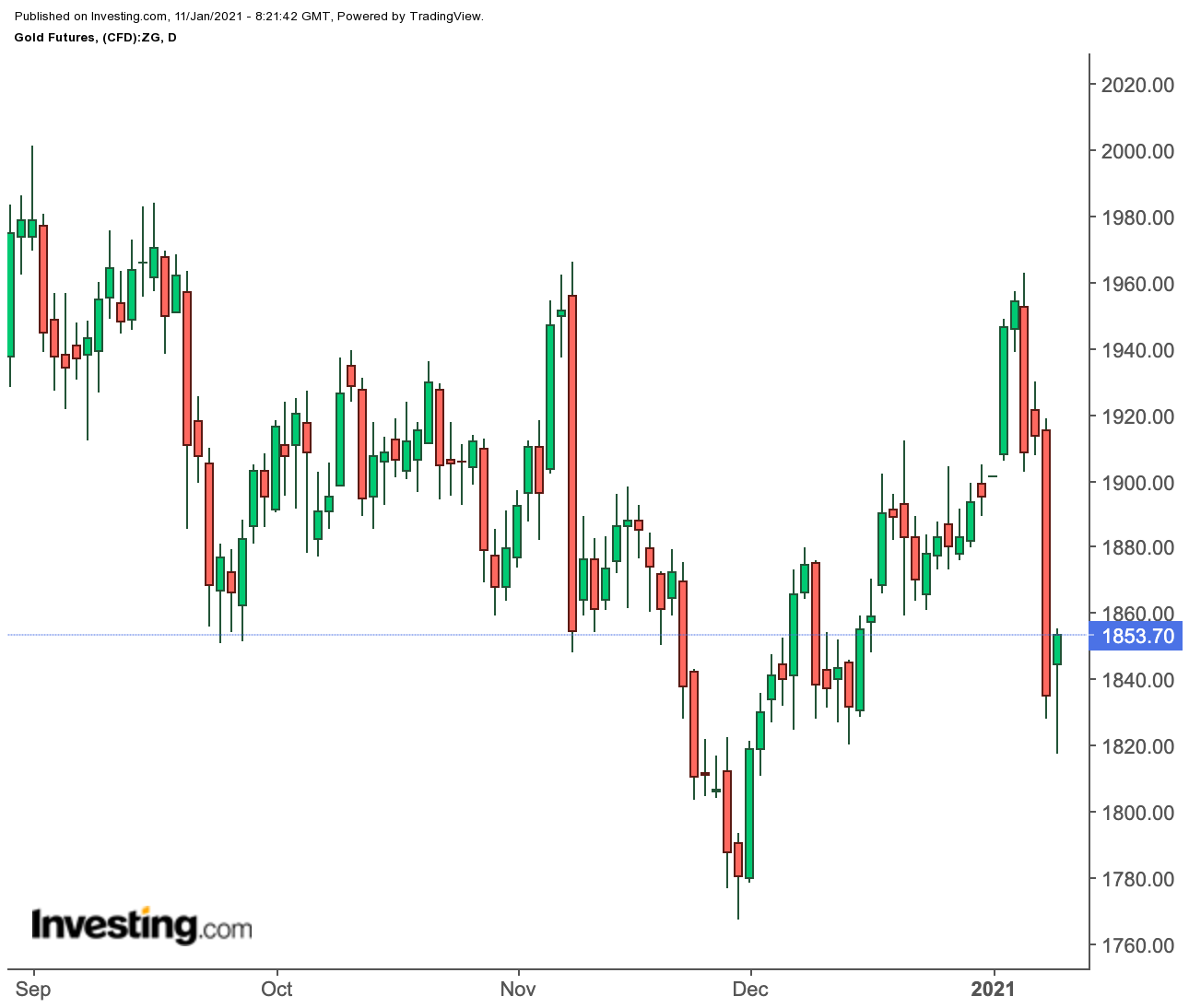 Expectations that US data on Wednesday will show a mild uptick could keep gold trading in a $1,830-$1,850 range, and staunch the logic-defying selling that took the yellow metal down by more than $100 from last week’s highs.

Adding to gold’s upward momentum could also be Friday’s monthly US which are expected to show a slowdown in December due to a spike in the pandemic that hurt holiday shopping.

That aside, Federal Reserve Chair Jerome Powell is scheduled to on Thursday and could reaffirm interest rates at near zero through at least 2023, and that the path of the economy is significantly dependent on the course of the virus.

Despite all this, if weakness in technical charts continues to haunt gold, then the trapdoor under $1,800 could open, sending it to $1,790 at the first stop, says Sunil Kumar Dixit, analyst at Kolkata, India-based SK Dixit Charting.

“The weakness in gold hasn’t really been plugged after the asinine selling of last week and chart-wise, there’s little comfort that bulls can draw at this point.”

Friday’s meltdown that took almost $80 off gold seemed almost absurd as it came after the release of the December US employment , which showed a loss of 140,000 jobs.

Typically, when jobs reports are bad, gold acts as a hedge. And this was the first time in eight months that the US jobs report had registered negative growth, since the height of the coronavirus outbreak in April.

Still, some saw it fit to sell gold on the narrative that incoming President-elect Joseph Biden will have “stability” of rule that dilutes the need to hedge in safe havens such as gold, since all three US legislative houses—the White House, the House of Representatives and the Senate—will be under the control of his Democratic Party.

That thinking sent the yield on the US note up 4% on Friday alone and 19% on the week—the most since the week ended Aug. 7, when a similar rally in bonds killed gold’s $2,000 plus rally.

The yellow metal has never regained its glory since tumbling from the record high of nearly $2,090 that week. The spike in yields threw a lifeline to the battered —the contrarian trade to gold—which has since risen above the key 90-level.

What all short-sellers in gold seemed to forget on Friday was Biden’s plan to send out $2,000 checks to every American, almost as soon as he takes office on Jan. 20. The president-elect has said he intends to push out at least two more comprehensive stimulus packages that could add trillions to the US federal debt, already estimated at $3.8 billion for 2020.

And what do gold bears think this will do to the dollar? Expanded money supply almost always has negative consequences for the greenback. Unless the economy and labor market pick up for the Federal Reserve to consider raising rates, the dollar would hit new lows. That and the spiralling US debt situation will require a hedge in “safe assets”, even if they aren’t yield-bearing. Gold is the proven answer, not with such suspect valuations that it can swing 50% in a day.

Even so, few analysts have high hopes for gold in the current week.

“Failure at $1760.00 an ounce would call for a reassessment and gold’s losses in that scenario could extend to $1650.00 an ounce initially.”

and London-traded , both fell in Monday’s Asian trading on renewed concerns about global fuel demand amid strict coronavirus lockdowns in Europe and new movement restrictions in China, the world’s second-largest oil user. 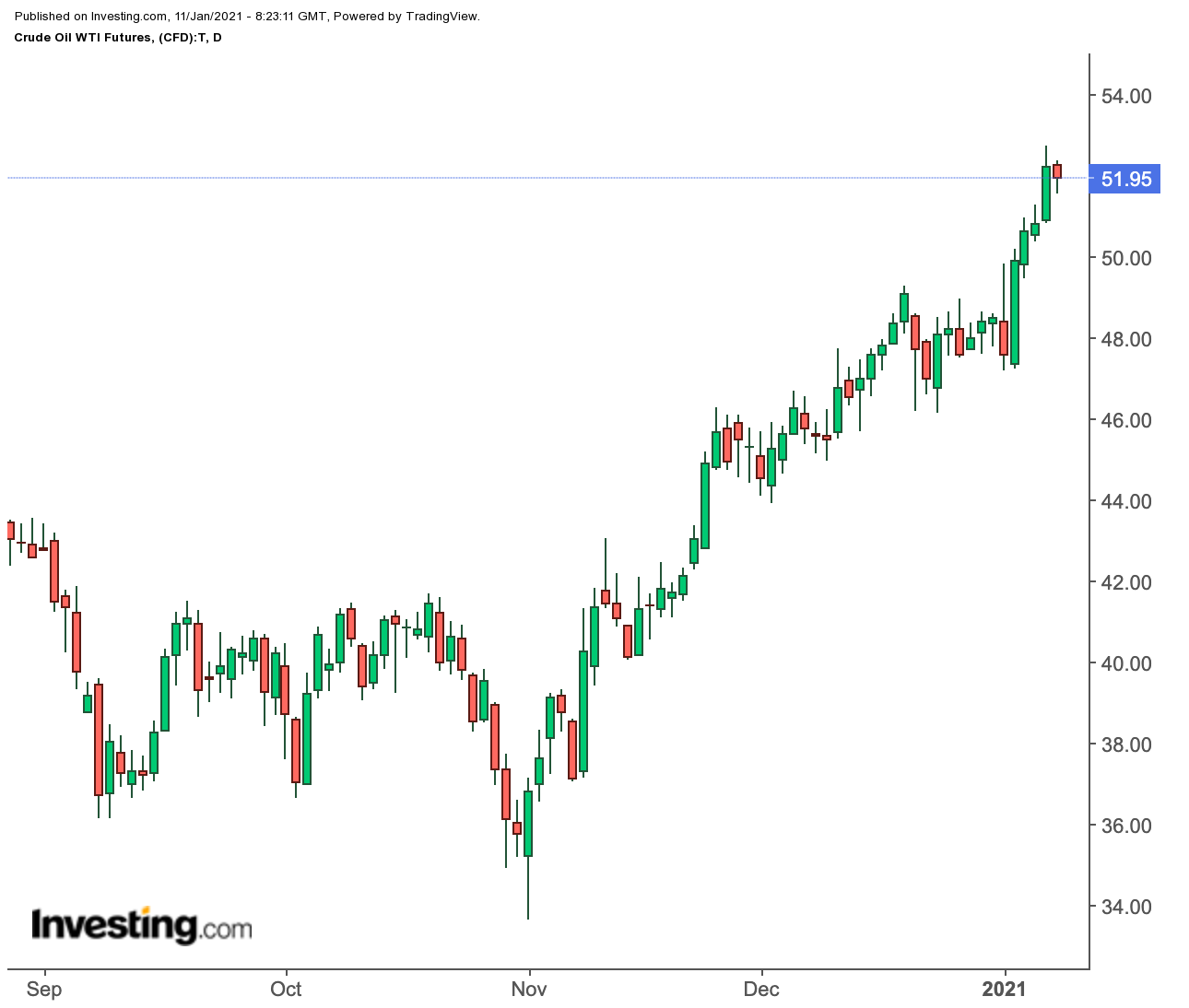 Shijiazhuang, Hebei’s capital and epicenter of the new outbreak in the province, is in lockdown with people and vehicles barred from leaving the city as authorities move to curb the spread of the disease.

Most of Europe is now under the strictest restrictions, according to the Oxford stringency index, which assesses indicators such as travel bans and the closure of schools and workplaces.

Oil started 2021 with a boom, with crude prices ending the first week of the year up 8% as OPEC kingpin Saudi Arabia continued with its lower-for-longer supply strategy.

Since Tuesday’s announcement by the kingdom that it will cut an additional million barrels per day from its production in February and March, the oil market’s attention has been almost entirely on the potential for reduced global supplies.

Lost, or rather overlooked, was the weakening demand for fuels in America, particularly with falling to its lowest since the start of the pandemic. Inventories of {{ecl-917||diesel-led distillates have been piling up too.

Oil analyst Osama Rizvi said in a blog that ran on Oilprice.com over the week that China demand will ultimately decide the oil market. He adds:

“China almost single-handedly rescued commodity markets during the pandemic, but its imports are now slowing. The interplay between the US and China will be a vital factor in how the Chinese economy performs in 2021.”

“Saudi Arabia’s decision to extend production cuts at the start of the year was very good news for US drillers, but the industry is still in for a tough year if the global pandemic isn’t dealt with and if oil demand doesn’t rebound rapidly.”

Those who wish to doubt Rizvi should look at weekly US crude exports standing at a near record of 3.63 million barrels per day now and accounting for 33% of production: most of it is going to China.