Commodities Week Ahead: Gold Hinges On Powell, Oil In $65-$70 Band

Will Federal Reserve Chair Jay Powell say something this week to cool ramping US bond yields? If not, will he at least indicate action to come?

The Fed will hold its monthly policy meeting for March on Tuesday and Wednesday, following which Powell will hold his routine . The central’s is expected to leave US unchanged again, at near zero, as it has over the past year, since the outbreak of the coronavirus pandemic.

But expectations are also high that Powell will express some concern at least over this year’s stunning selloff in Treasury markets, which has led the yield on the Treasury note to hit pre-pandemic highs above 1.6% over the past month, the latest being on Friday.

Powell Move To Tamp Down Yields Will Be Good For Gold

The surging bond yields have been an anathema to , forcing the yellow metal to lose 9% since the start of the year. Any indications by the Fed that it will intensify bond buying in the coming months could be just the thing to clamp down on surging yields and spark a rally in gold. 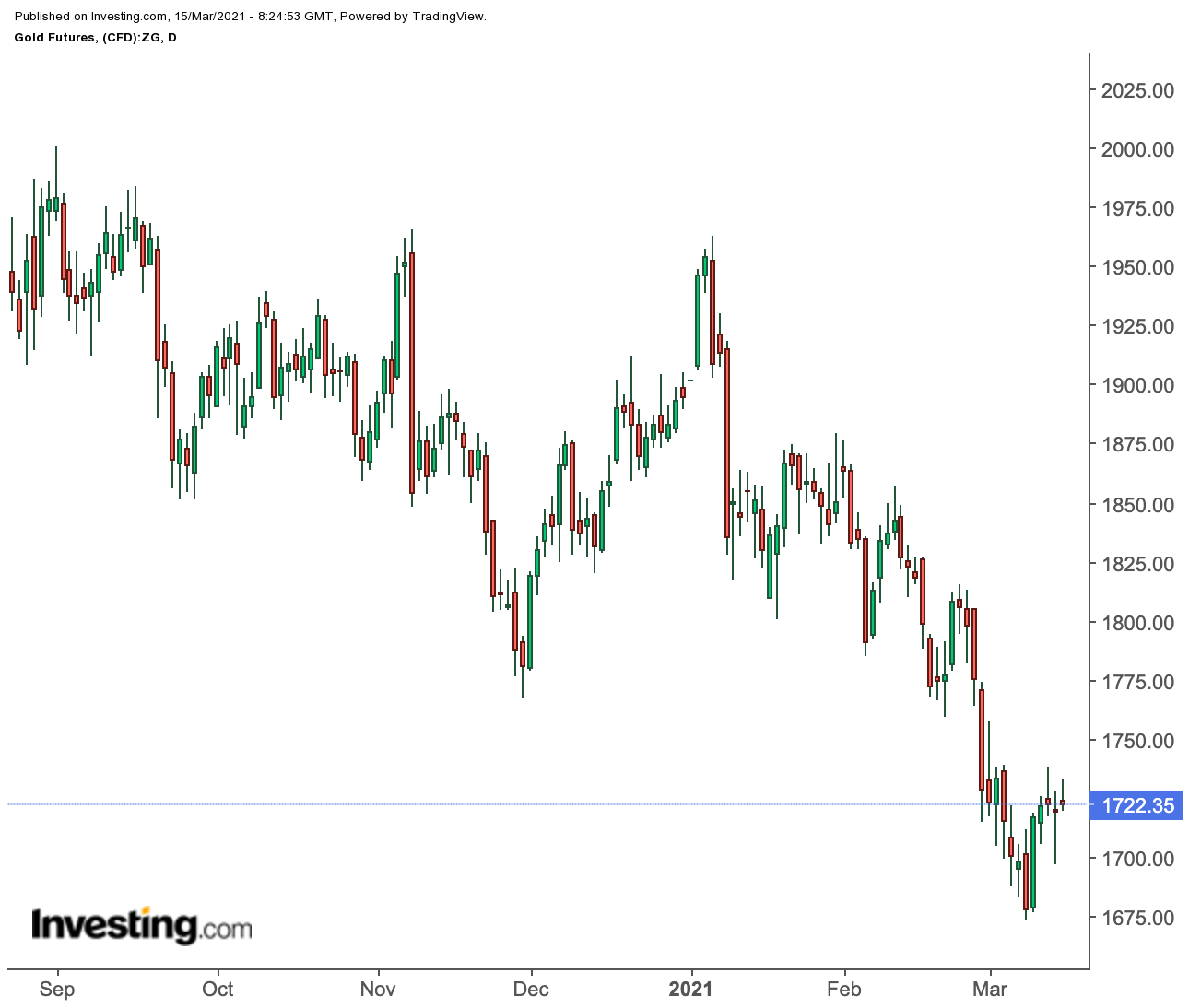 Jeffrey Halley, senior markets analyst for Asia Pacific at OANDA, said in his note on Monday:

“Gold’s performance, and the resilience of non-tech stocks, hints that maybe markets are starting to get more comfortable with the prospects of higher inflation, and some degree of resulting adjustment in the costs of capital.”

There’s another reason investors will be on the lookout for signs that Powell and fellow policymakers are concerned about the current spike in yields, amid mounting inflation expectations. The hike in bond yields has led to a repricing of interest rate expectations to anticipate a Fed hike as early as late 2022. This is at odds with the central bank’s aim of keeping rates unchanged until the end of 2023.

For context, bond yields have been rallying on the argument that economic recovery in the coming months could extend beyond Fed expectations, leading to spiralling inflation, as the central bank insists on keeping interest rates at near zero.

The dollar, which typically falls in an environment of heightened inflation fears, also rallied on the same runaway economic recovery logic. The greenback’s status as a reserve currency has bolstered its standing as a safe haven, leading to new long positions being built in the dollar. In recent weeks, the has returned near the key bullish level of 92, further weighing on gold.

For decades, gold was touted as the best store of value whenever there were worries about inflation. Yet, in recent months, it was deliberately prevented from being the go-to asset for investors as Wall Street banks, hedge funds and other actors shorted the metal while pushing up US bond yields and the dollar instead.

Despite this, an intriguing shift occurred on Friday. Gold prices began the day weak, falling more than $20 at one point, as bond yields again hit 13-year highs and the dollar spiked as well.

But as the day progressed, the yellow metal recovered. It squeezed in its first weekly profit in four as gold futures managed to settle just a few dollars lower than on Thursday, while the spot price actually closed higher.

The comeback was somewhat spectacular considering that both of gold’s spot and futures prices fell below the $1,700 support earlier in the day.

It was not clear immediately what led to the turnaround.

Gold May Be Starting To Behave Like A Safe Haven Again

But some, like OANDA’s Halley, think gold may have started recapturing its safe-haven quality as US inflation enters a new era.

“This is the first time in recent memory that I can recall gold not wilting in the face of such moves and behaving like the inflation hedge that so many of us expect it to be,” Halley wrote.

If gold was turning around, it was indeed early days for it to prove itself, said Halley, who added that it needed to be closely monitored if a material bottom has formed.

“Gold’s relative strength index is comfortably in neutral territory, giving the yellow metal plenty of room to manoeuvre as well. If US yields push higher this week and gold at least holds at these levels, the case for a material rally will become compelling.”

Oil Seen Stuck In A Range 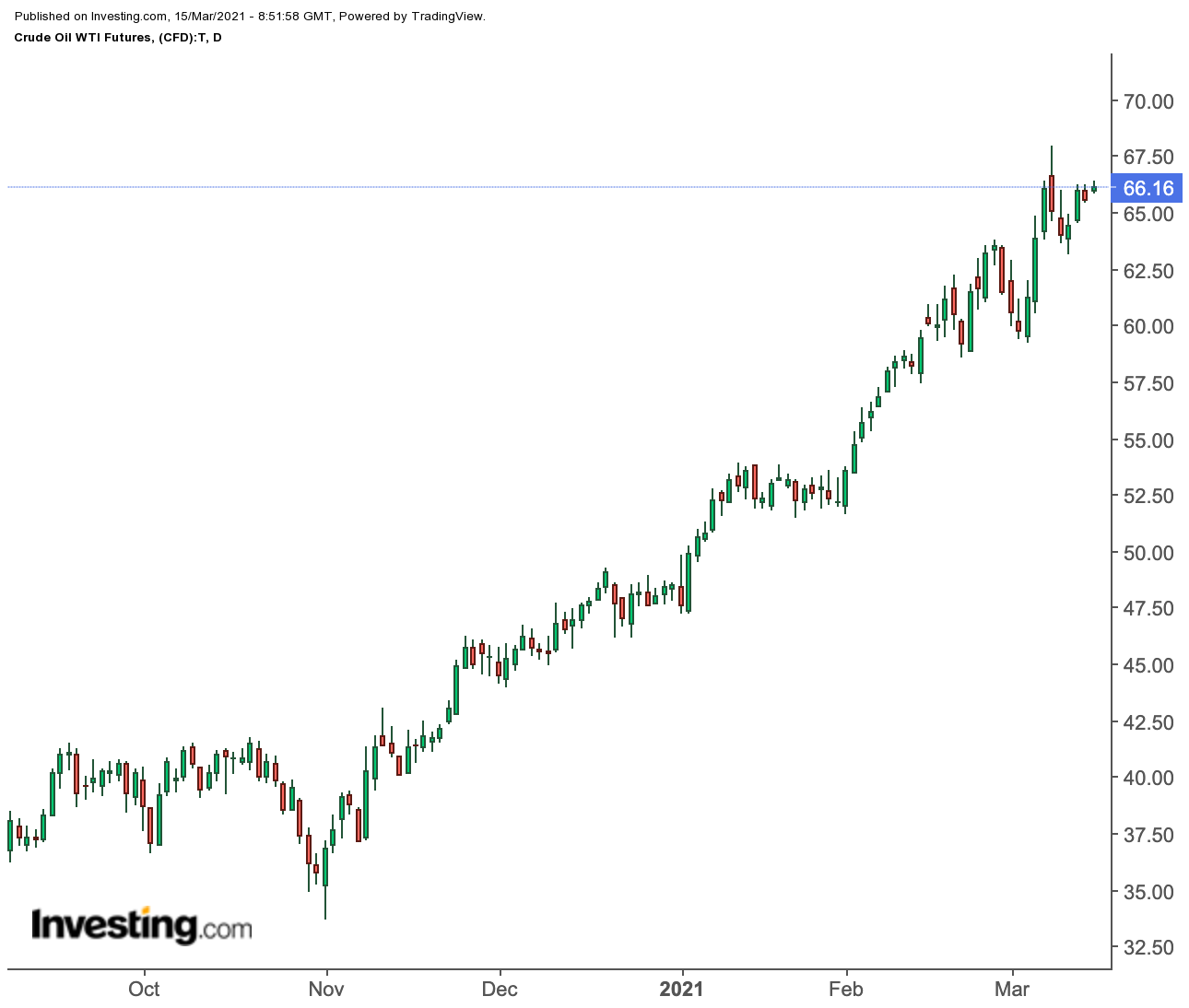 Despite the dip, oil prices remain at least 80% higher than where they stood at end-October despite government data indicating US crude output was recovering faster than refining after last month’s storm-related outages in Texas.

The EIA also said that rose 13.798 million barrels last week, compared with industry analysts’ expectations for a build of 816,000. The prior week’s build was 21.5 million barrels, even higher than the 19.2 million-barrel increase seen during the week to Apr. 10, 2020, when demand for oil cratered amid the COVID-19 outbreak.

But offsetting some of the impact of last week’s crude build were larger-than-forecast drawdowns in and , the EIA said.

That allowed traders to close an eye on the humongous crude builds and mark up in production since the Texas storm.

Scott Shelton, energy futures broker at ICAP in Durham, North Carolina, wrote in a note on Friday that oil is outperforming due to strong fuel products “but a lack of correlation on the (crude) macro is (happening).”

“Oil will need to ‘do its own work’ ” in breaking out of its range, he added.