prices are likely to start a new leg lower over the next two days as the ticks upward on speculation that the Federal Reserve could announce some hawkish action at its monthly policy that favors the dollar and US Treasury yields. 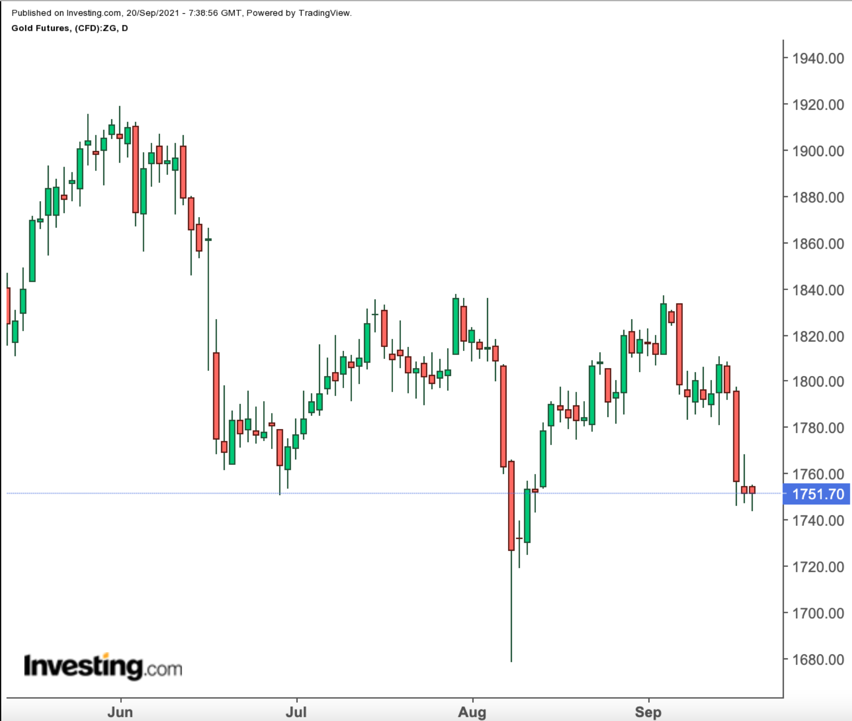 Investors in , meanwhile, will attempt to move on from the three-week old Hurricane Ida saga, which as of Friday continued to shut-in a quarter of crude production in the US Gulf Coast of Mexico. China’s indication that it will use more stockpiles to avoid pricey oil imports also weighed on crude prices. 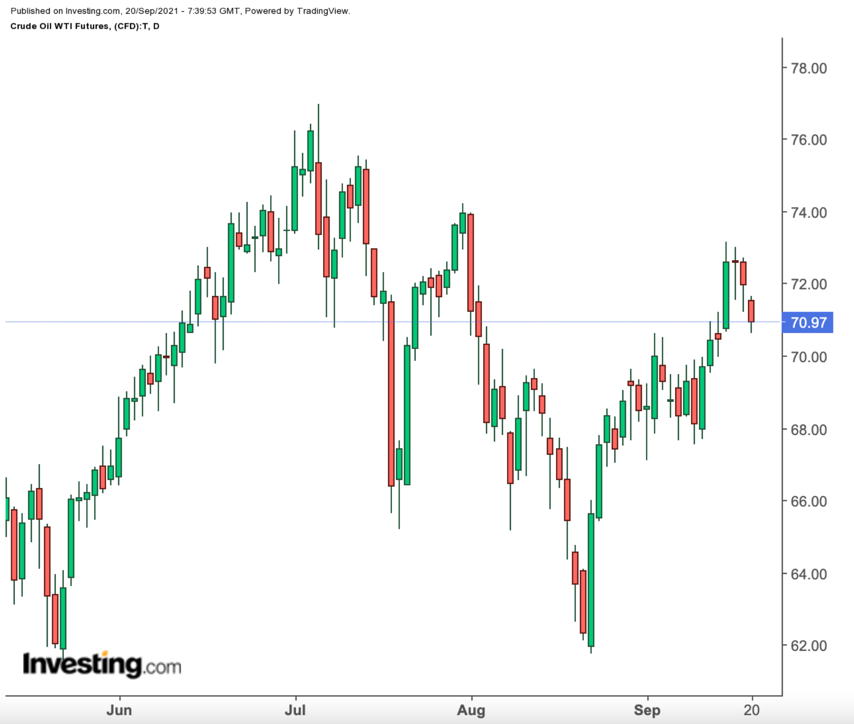 The Fed’s FOMC, or Federal Open Market Committee, is to begin on Tuesday a two-day meeting that will close with a policy announcement and news conference by Chairman on Wednesday.

For months now, there has been speculation that the central bank will announce a taper of its $120 billion bond and assets buying program that had been in place since the Covid outbreak of March 2020.

The Fed’s timeline for scaling back economic stimulus is important as it represents a first step towards an eventual hike in interest rate, which it has kept at near zero over the past 18 months.

The most powerful officials within the FOMC, including the Fed chairman, have done all they can to delay a pullback of the stimulus using the excuse of the resurgence of the coronavirus due to the Delta variant. This time too, the Fed may issue a wishy-washy statement on the taper, followed by more mixed messaging by Powell. Pundits expect the Fed not to make any announcement on the taper till November.

Gold, oil and other major commodities got off to a nervous start in Asia on Monday with holidays in Mainland China, Japan and South Korea impacting liquidity. In fact, a heavy holiday schedule amongst the Northern Asia heavyweights will likely affect liquidity to some extent all week, potentially exacerbating market moves.

Since Friday, a risk-off mood had set in across risk markets after US Treasury Secretary Janet Yellen reiterated her warning that the economy could fall into recession if Congress does not reach a deal soon to raise the country’s debt limit.

“The list of circling sharks is long, starting with increasing noise from the US about the debt ceiling. Raising the debt ceiling used to be a rubber stamp exercise, but in a polarised United States, that is no longer the case.”

As for the Fed taper, Halley added that it was naive to believe that “having got the world addicted to bottomless amounts of zero percent money and a backstop to the dumbest of investment decisions over the past decade plus, that the Fed can put that genie bank in the bottom with no impact.”

Oil prices were also under pressure after China’s Premier Li said over the weekend that China will use “market tools” to stabilise commodity prices. That appeared to be a coded message for the release of more oil and metals supplies from stockpiles versus imports.

New York-traded West Texas Intermediate crude, the benchmark for US oil, hovered under $71.15 per barrel, down 67 cents, or 1%. WTI ended up 3% last week.

“As a price taker, and not a price maker, there is only so much China can do to impact prices in the medium term,” Halley said.

“But coming on a day where liquidity is lower because of holidays, markets are nervous and US yields and the Dollar have risen ahead of the FOMC, there is an outsized impact.”

A sharp correction in US stocks could also set the pace for a broad risk-off across markets, including oil, that could send gold higher, said analysts.

“Personally, I would love to see a 5%–7% correction within the between now and Oct. 10, just to reset expectations,” said stocks analyst Brian Gilmartin.

While he suspected Q3 and Q4 2021 S&P 500 earnings will be “ok” that did not mean that markets will continue cruising, said Gilmartin.

Just because the conditions aren’t present for a “market bubble” condition, doesn’t mean the S&P 500 couldn’t see a substantial correction,” he added.