Commodities Week Ahead: Gold Counting On Fed; Oil Ready For Another EIA Surprise?

Sitting pretty—at least for now—on their $1,500 perch, gold punters seem convinced about what the Federal Reserve will do on Wednesday.

Expectations for a third straight U.S. are well reflected in gold prices, in line with the latest reading on Investing.com’s Fed Rate Monitor Tool. Here, federal funds futures are assigning a for another quarter-point cut—just like in July and September—when the central bank emerges from its Oct. 30 .

So, we’re likely to get a rate cut, despite the Trump administration insisting the U.S. economy is doing exceedingly well.

Why the administration would beat its chest over the economy while going to the Fed with hat in hand to demand a rate cut isn’t something that’s very well explained.

What we keep hearing from it though is that the United States, which posted a second quarter growth of 2%, must slash rates as aggressively as Germany, where the annual growth rate had already slowed to 0.4% in the second quarter. That seems a good enough explanation for gold longs.

Could The Fed Surprise?

But what if the Fed decides to stay, potentially leaving Chairman Jay Powell once again at the tweeting fury of President Donald Trump: What would happen to the yellow metal then?

Most aren’t sure about the mid- to longer-term prospects for gold from such a Fed decision as it would also raise questions about what the central bank would do at its next policy decision come December.

What most will bet on is an immediate plunge to below $1,500 if the Fed holds rates this week. 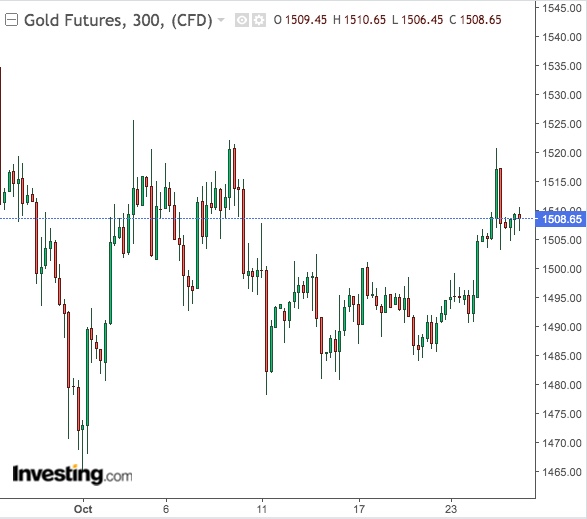 In its most recent lows, on COMEX hit $1,465 on Sept. 29, while tumbled to $1,459.15 on Oct. 1. The market will likely test those lows and more—unless, of course, Brexit complications spike again or the much-touted phase one of the U.S.-China trade deal doesn’t materialize.

Wednesday Will Also Be Oil’s D-Day

The weekly outlook for oil will also be decided on Wednesday—not so much by the Fed but by EIA data.

For the past six weeks, the weekly dataset from the Energy Information Administration has been most unusual due to anemic refinery activity. After crude stock builds for five straight weeks, a surprising last week threw the bears off and brought the bulls charging back in.

Even so, after an initial price surge on the EIA data, oil’s advance slowed by Friday, raising questions on how well the next upward momentum will hold. 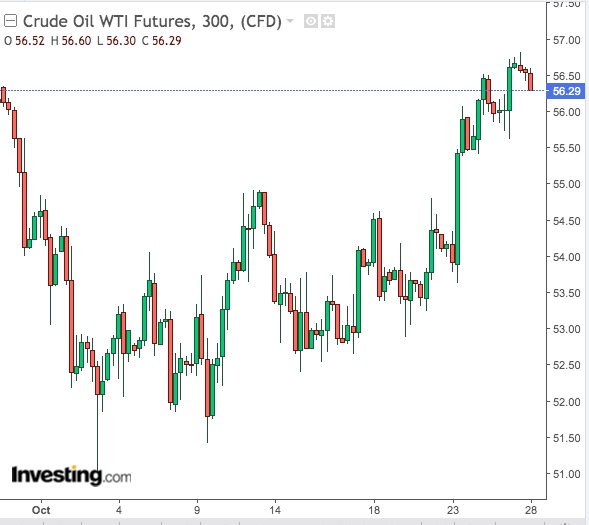 Overall, oil had seen dreary trading until the EIA surprised the market last Wednesday, announcing a 1.7-million-barrel drop in domestic crude stockpiles, versus analysts’ expectations for a 2.2-million-barrel build.

Another factor supporting crude prices last week was a Reuters report hinting at the likelihood of the forthcoming OPEC meeting in December considering deeper cuts than the 1.2 million barrels per day agreed by the cartel and its key ally Russia almost a year back.

However, with at least six weeks to the OPEC meeting, any talk of production cuts at this point is price jawboning more than anything.

So, will oil prices see a new break higher this week? Or will there be more of the same old-same old—meaning a slide back to the previous range of $50-$53 per barrel for WTI and $55-$58 for Brent?

In any market situation where noise crowds out the nuances, one has to return to the basics.

The basics now suggest that amidst the din of the trade war, Brexit troubles and worries of a global recession, the only true real-time indicator of oil’s supply-demand is weekly EIA data.

“While we could see prices go even higher, I feel global macro events will determine the next move in oil, if the EIA doesn’t, and we could go range bound again.”