Will this be the week the Fed faces up to inflationary forces and lays down a timetable for the tapering of its monthly asset buying? If so, has already been caught in the throes of that move, and could slip further to mid $1,800 levels depending on how strongly markets telegraph the exit. 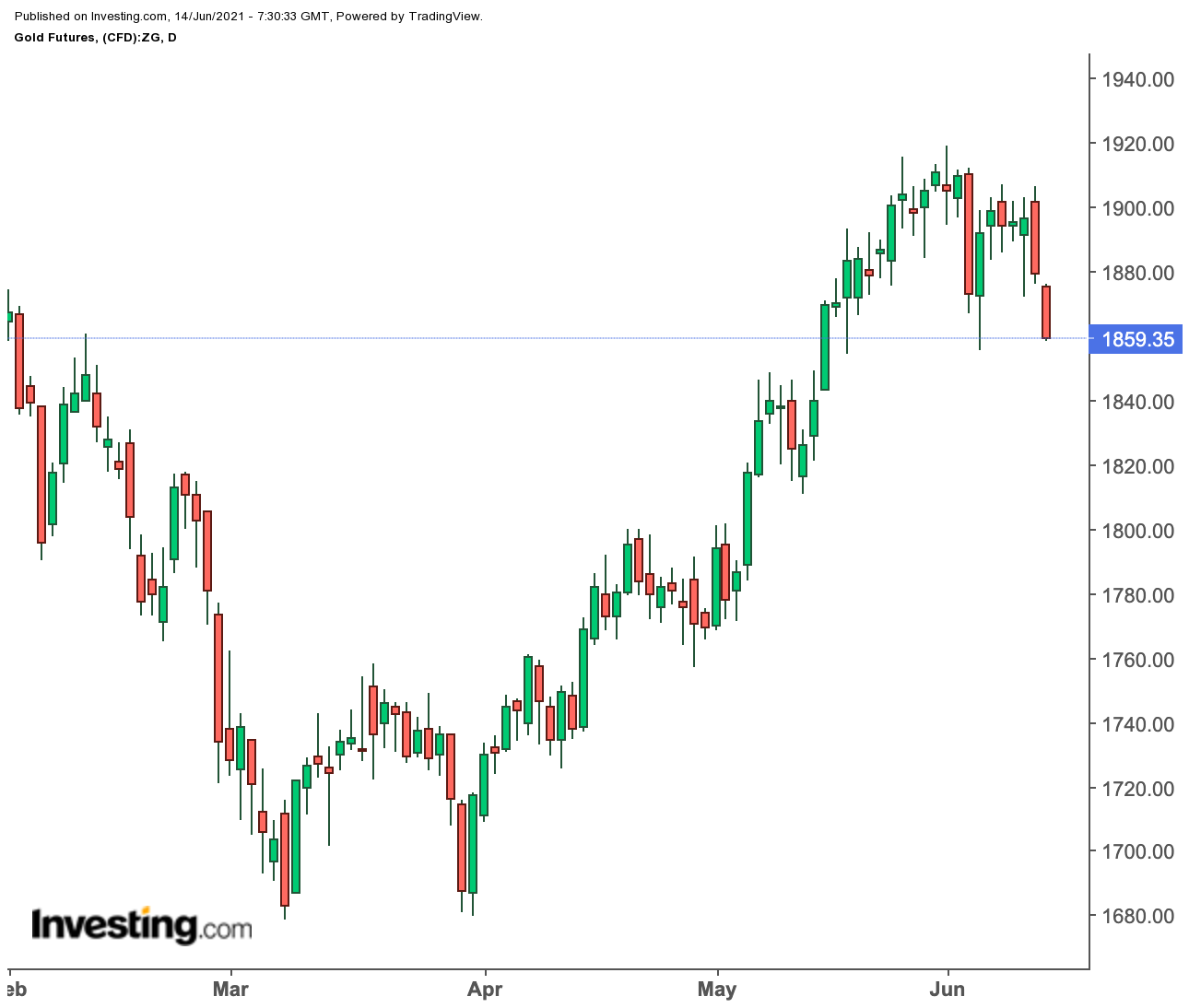 The Federal Reserve has repeatedly said that near-term price spikes will not translate into lasting and Chairman Jerome Powell is expected to stick to this stance and reassure markets the Fed’s policy will remain accommodative.

Most analysts are not expecting the central bank to begin discussing scaling back its asset purchase program before its annual conference in Jackson Hole, Wyoming, in late August.

Even so, investors will be zeroing in on the Fed’s statement on Wednesday at the conclusion of its two-day for June, held against a backdrop of persistent concerns over inflation spikes and whether these could prompt the central bank to pull back its monthly asset purchases faster than thought.

At stake is $80 billion in Treasury bonds and $40 billion in mortgage bonds that the Fed has been buying since the COVID-19 outbreak last year. A bigger target will be ultra low interest rates of between zero and a quarter percentage point, also in force since March 2020.

While US inflation numbers are rising, labor market recovery remains sluggish. The added 559,000 jobs last month after gains of just 278,000 in April. That left employment about 7.6 million jobs below its peak in February 2020.

and most risk assets are likely to tread water ahead of the policy from the Fed’s FOMC, or Federal Open Market Committee. Investors will be reluctant to take major positions until they scrutinize the document for clues on its timetable for tapering and raising of interest rates.

Despite this, gold could take a hit, with investors being faster to short the metal than go long, as recent history has shown.

In Monday’s Asian trading, COMEX gold futures neared a 2-week low at $1,861.35, extending its Friday drop of nearly 1% on the rebound in the . The US currency held steady at 90.5 at the start of the new week.

Jeffrey Halley, who heads Asia Pacific research for online broker OANDA, said gold has support at $1856.00 an ounce, but the $1840.00 to $1845.00 zone must hold to keep the bullish case on track. That contains a series of previous daily highs and the 200-DMA, or Daily Moving Average.

Since hitting record highs above $2,000 an ounce in August, gold has had spotty returns over the past few months despite creeping price pressures and fears that US inflation in 2021 could be the worst in 35 years.

In a trend that had become familiar in recent weeks, gold would start the week about $20 off the $1,900 threshold, and lose about another $20 in the subsequent session or two before recovering that last bit by Friday. The weekly trading band of $30-$40 had become one of the most predictable plays in COMEX gold futures since early May.

Away from Fed meeting, the US is to release May data on and on Tuesday.

Also out on Tuesday is data which will be closely watched amid issues over supply constraints and labor market shortages. This could translate into increases in producer price inflation.

The economic calendar also features reports on and . Data on Thursday showed the number of Americans filing new claims for benefits fell last week to the lowest level in nearly 15 months as the reopening continues.

On the oil front, crude prices ticked higher again, with US benchmark holding above $71 per barrel and global gauge trading above $73, after closing up for a third straight week on speculation of runaway summer demand for fuels. 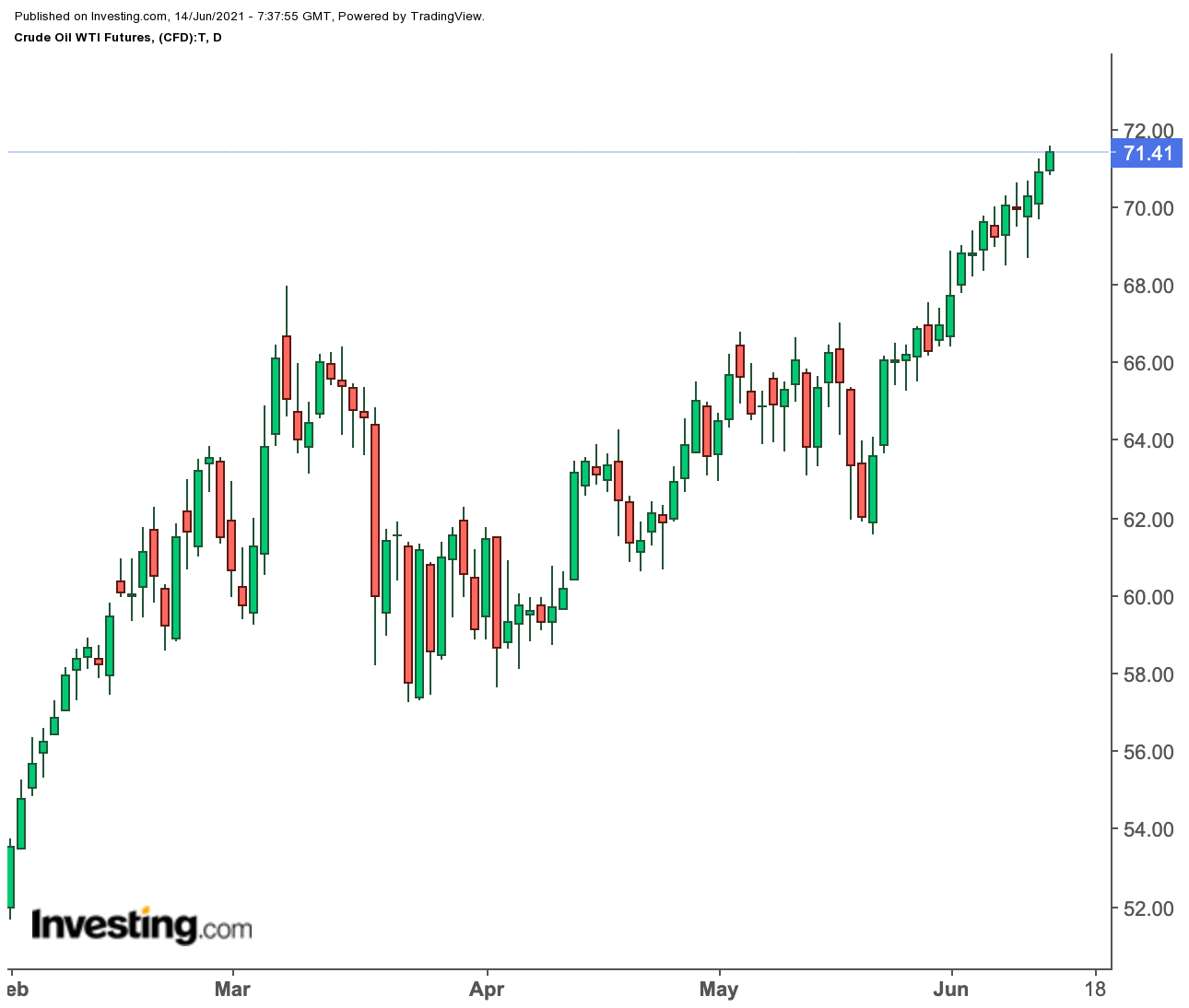 Oil prices have been on a tear lately amid projections for one of the biggest ever summer demand periods for fuel in the United States as the country reopens fully from Covid-19 lockdowns.

The International Energy Agency, which represents the interests of Western oil consumers, said in its monthly report that global producers would need to boost output to meet demand set to recover to pre-pandemic levels by the end of 2022.

Oil Extends Rally; Some Have Wary Eye On Gasoline Builds

Despite the optimism over global oil demand, US gasoline take-up has been tepid since the May 31 Memorial Day that marked the start of the peak summer driving period in the world’s largest oil consuming country. That suggests to some that more time was probably needed for US fuel demand to accelerate.

The problem was particularly highlighted by the US Energy Information Administration’s Weekly Petroleum Status report released Wednesday, which showed rising by 7.05 million barrels during the week ended June 4—nearly six times above analysts estimates for a 1.2-million barrel build.

“We need to start showing some strong weekly draw numbers on gasoline soon. Otherwise WTI is going to get weighed down, even if crude stocks keep falling.”