Gold could catch a bid this week as the U.S. Supreme Court crisis turns into a potential game changer in November’s presidential election, raising the stakes for both President Donald Trump and his challenger Joe Biden in a race that could become harder to call.

Oil, meanwhile, might see limited gains this week, even turn negative, on uncertainty over Libya’s political situation and speculation that Saudi Arabian King Salman is gravely ill, leading to concerns over how quickly Crown Prince Mohammad bin Salman might succeed him, if necessary.

Gold prices were mixed in feeble trading in Monday’s Asian session, with futures down and bullion slightly up, as Trump and Biden headed an epic campaign-season showdown over the future of the Supreme Court following the death of Justice Ruth Bader Ginsburg.

In Congress, Speaker Nancy Pelosi, a Democrat, did not rule out impeaching President Trump or Attorney General William Barr if Biden wins the November election and the Republican-dominated Senate tries to push through Ginsburg’s replacement in a lame-duck session ahead of the election.

“The negative tone in the US equity futures points to a weak start on Wall Street, which could bode well for the bright metal,” gold chartist Dhwani Mehta said in a blog on FX Street. Futures of Wall Street’s , and indexes all pointed lower ahead of their New York open.

Gold could also benefit if stocks on Wall Street face a severe test of confidence amid Congressional testimony due from Federal Reserve Chairman Jay Powell. The Fed chair is on marathon session for three straight days from Tuesday, setting markets up for what was being fashioned as a “Powell-a-thon”.

Mehta said the gold and stock markets will take their cue from Powell’s first speech due at 10:00 AM ET (1400 GMT) Monday. She wrote:

“Any hints on the Fed’s future monetary policy path will have a significant bearing on the dollar-denominated gold.” 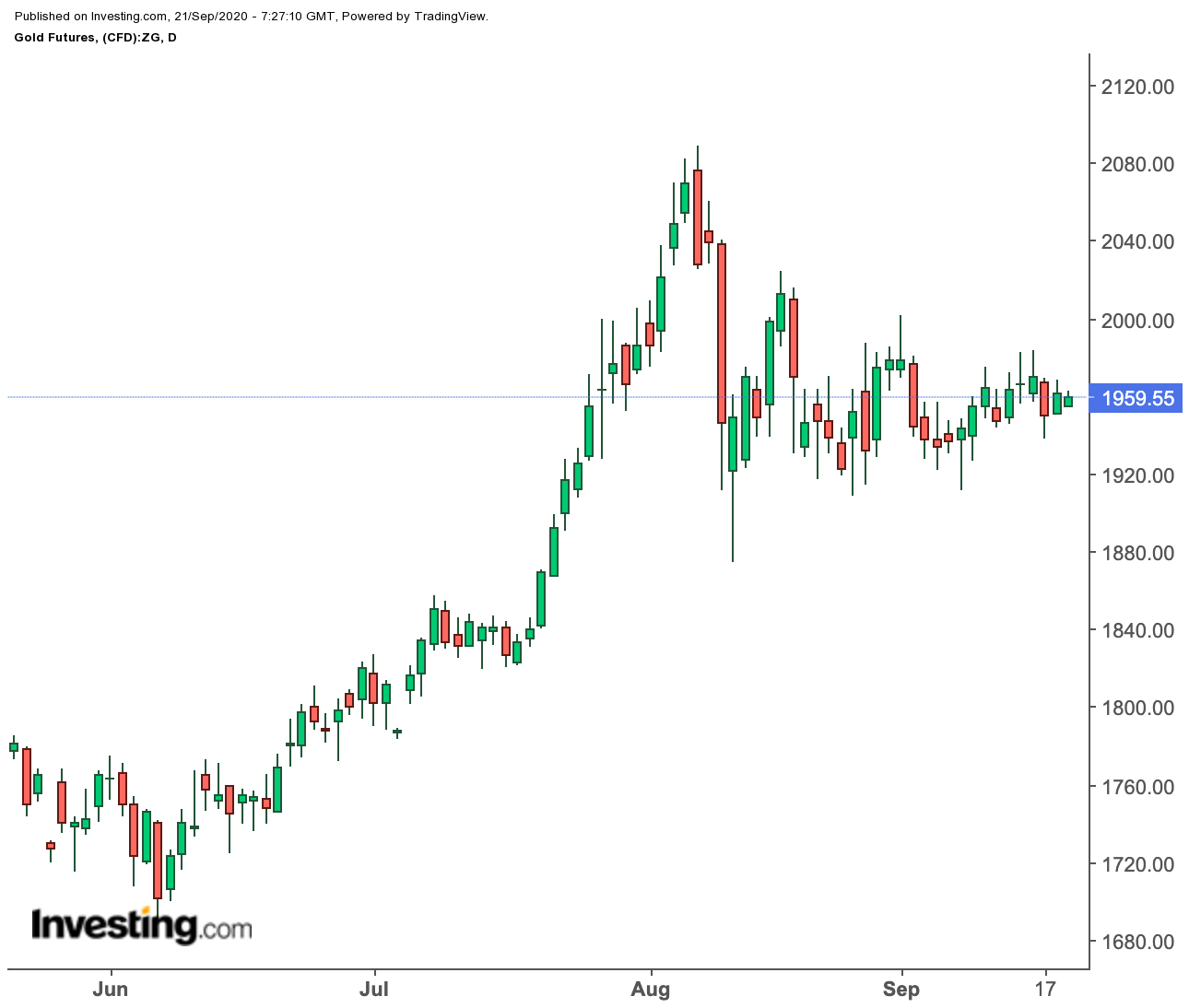 Gold bulls have been trying to revive momentum in the yellow metal since the market’s slump from August record highs of nearly $2,090 an ounce on COMEX and $2,073 on bullion.

But they’ve been frustrated largely by the logic-defying strength in the dollar, as U-S.-China tensions and lack of a new U.S. stimulus to fight the economic challenges of the coronavirus pandemic have inadvertently made the greenback a more appealing haven for some investors.

Even with the sliding below the key bullish 93 handle, gold prices had trouble rallying.

“If XAU/USD breaks $1974 then the (up)trend could be back on,” said Rajan Dhall, another gold chartist, in a blog on FX Street after Friday’s settlement in gold.

On the oil front, Libya’s National Oil Corporation lifted at the weekend a force majeure on what it deemed secure oil ports and facilities.

But the blockade on the rest of the oil in the North African country where fighters aligned to renegade general Haftar were located appeared to remain in place.

A workable peace deal between the government and Libyan forces under Haftar could bring an additional million barrels to market—something OPEC wouldn’t likely be happy about, given that the cartel is already struggling in making some members adhere to production cuts.

In Riyah, 84-year-old King Salman bin is said to be in ill health, with social media grinding out rumours of him being in critical condition. Crown Prince MbS, the king’s sixth son, is the favored successor, but until the installation is made, there is some uncertainty about the power play that might emerge at the House of Saud. 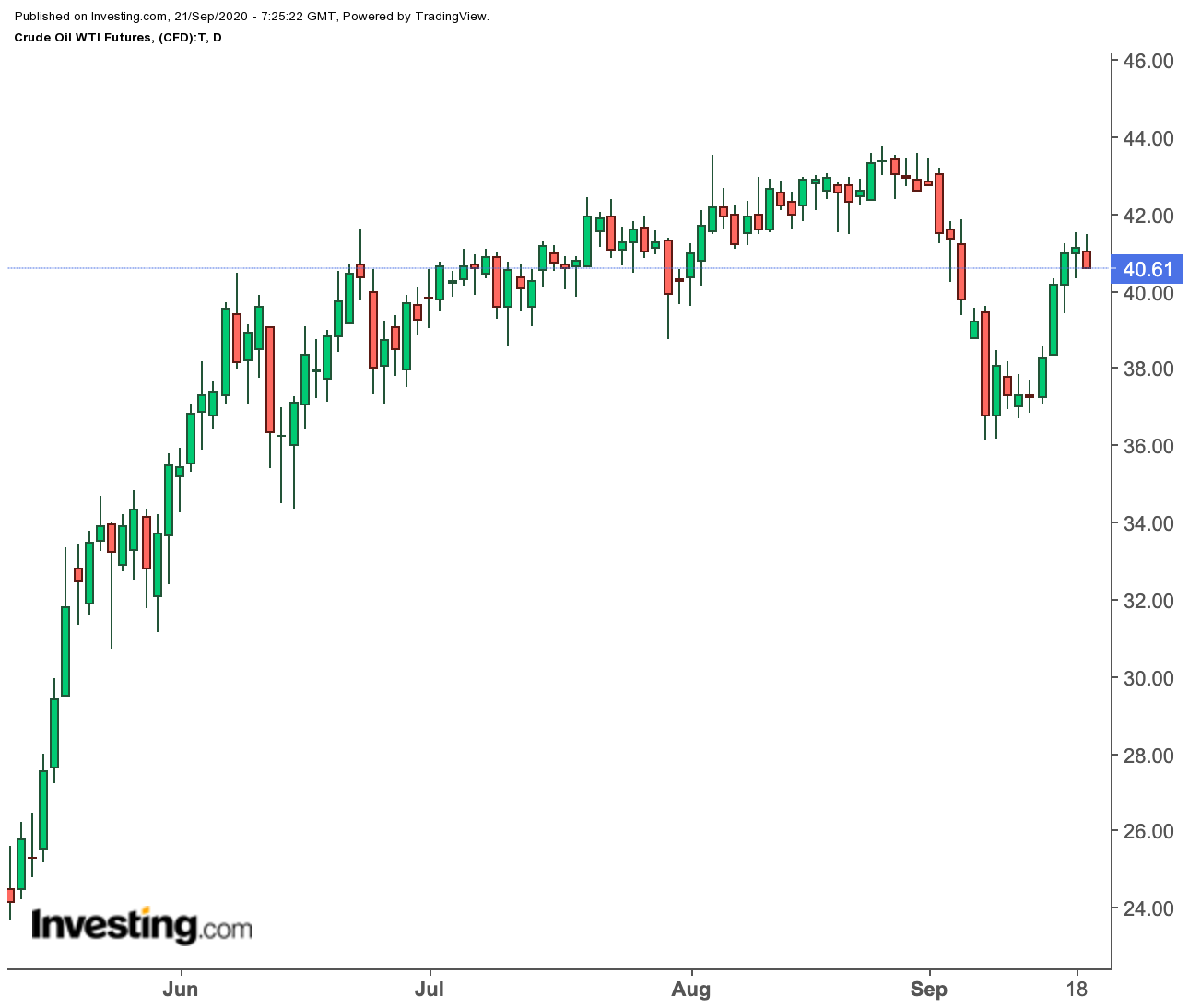 Last week’s oil rally was heightened by a meeting of the OPEC+, where Saudi Oil Minister Abdulaziz bin Salman—another son of King Salman—threatened to make life “hell” for oil bears who bet against the cartel. That was just before the Libyan peace deal offered by General Haftar.