This week’s prize riddle in commodities will be figuring out when and where the freefall in ends.

The other issue will be determining how quickly will get to $50 a barrel—and whether it’ll stay there or reverse as markets dial back some of the overrun in risk sentiment over potential COVID-19 vaccines.

Case in point: Citigroup sees support for gold emerging at $1,700 an ounce—about $75 below where it is currently trading—while Goldman Sachs projects oil will hit $65 per barrel in 2021.

Gold has lost just over $300, or 15%, from its August record high and is now below $1,800 an ounce. For the most ardent fans of the yellow metal, this would have been an unthinkable situation just a few months back, when $3,000 or more was being forecast for gold before the end of 2020, from a confluence of COVID-19-related stimulus spending and weakness. 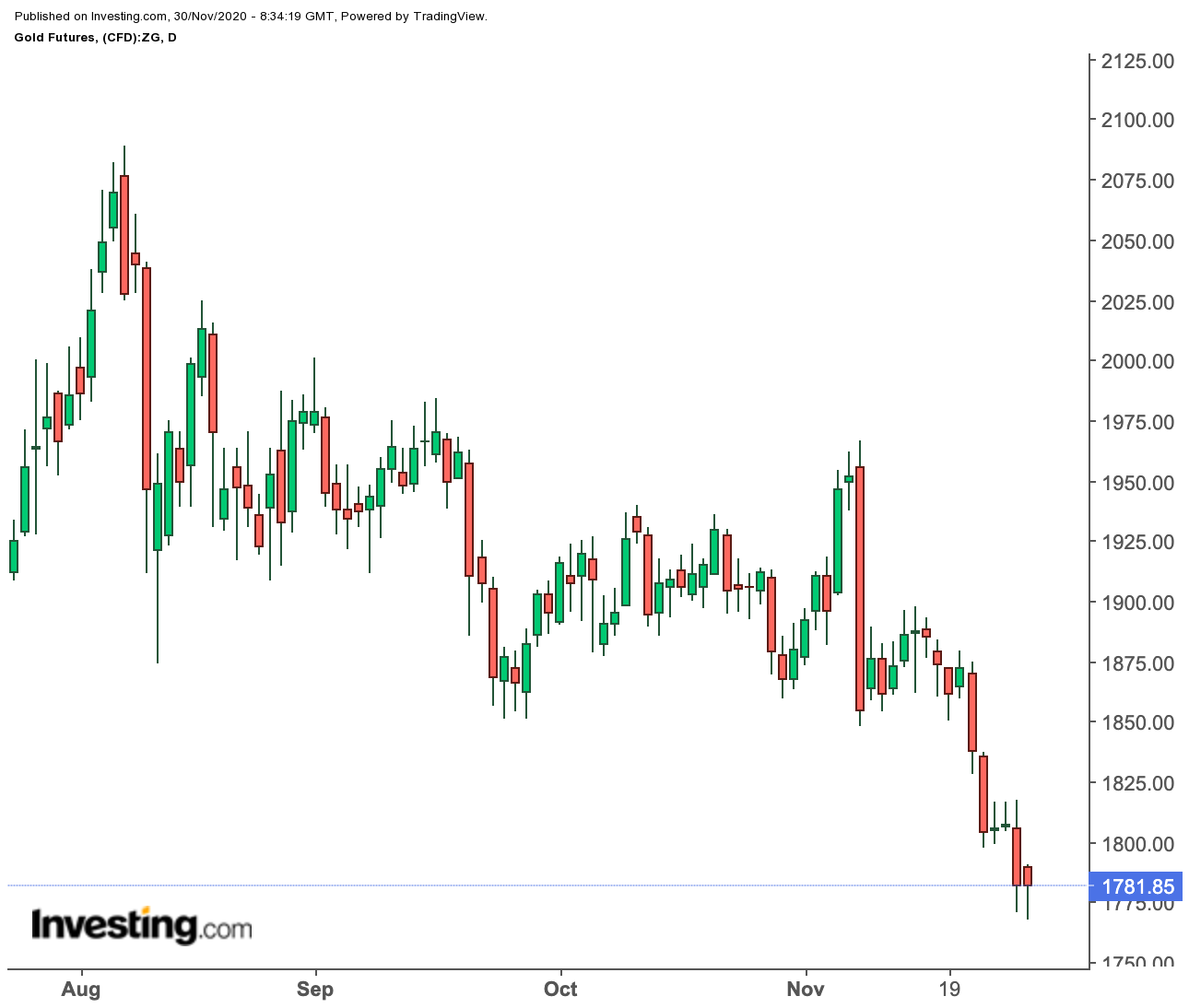 Some analysts think in the worst case scenario, gold could lose its $1,700 support. Sunil Kumar Dixit at SK Dixit Charting in Kolkata, India, is among those bracing for this eventuality. He says:

“Failure to hold above the critical support of $1,748 may cause further downside in gold towards $1,688 and $1,660 which will be a potentially strong and hard floor for yet another bull run after healthy consolidation.”

US crude’s benchmark was also down, trading at just under $45 per barrel, or about 2% lower. One reason for oil’s slide: Investor jitters ahead of a of producer group OPEC+ to decide whether to extend large output cuts to balance global markets.

After record supply cuts this year, the 13-member Saudi-steered Organization of the Petroleum Exporting Countries, with 10 allies led by Russia, originally planned to raise output by 2 million barrels per day from January 2021. Such a hike would be about 2% of global consumption.

But a good portion of the OPEC+ group is understood to want to keep production where it is now, to preserve the market’s upward momentum.

Goldman said that its base-case scenario was a 3-month delay to prevent a return to a global oil surplus through the first quarter of 2021, and not all of OPEC+ producers appeared onboard for this.

Oil Still In Bull Market, Aiming For $50 Per Barrel

Despite Monday’s drop, oil is in a bull market, having gained well above 20% from a low hit four weeks ago.

Both WTI and global crude benchmark appear to have the potential to test $50 a barrel. Back in April, one couldn’t have even imagined something like this happening before the end of the year. Then, US crude was at minus $40 as the coronavirus pandemic induced a kind of gloom on the long-term future of travel. 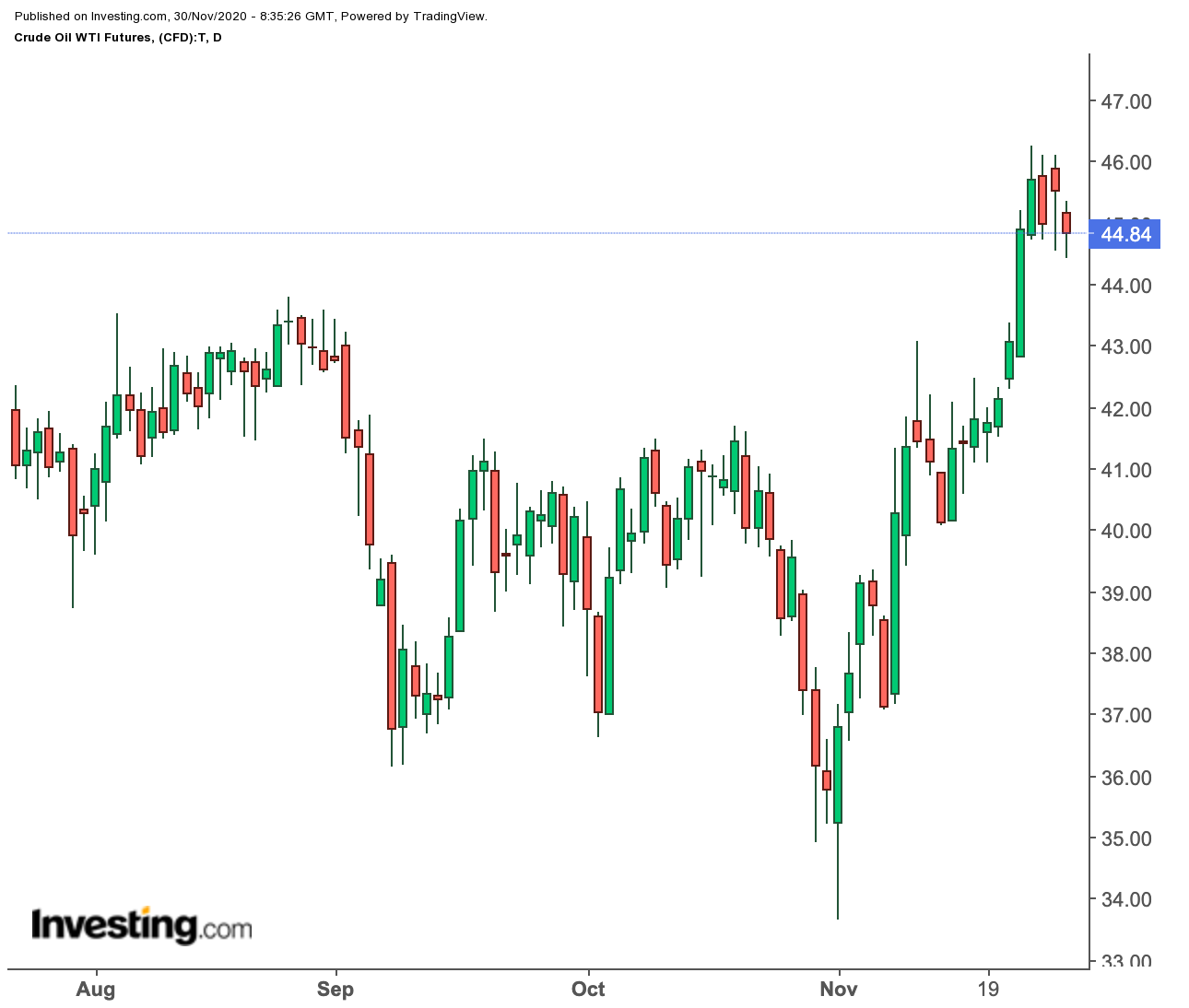 Oil and gold are both where they are for one reason: A rash of potential COVID-19 vaccine development news over the past three weeks.

Oil is being bought on the promise that the pandemic will be curbed over time, meaning a return to a life as we once knew it, that could result in more mobility and travel and, thus, more demand for oil.

Gold is being sold on the expectation that the recovering global economy will continue to ratchet up appetite for risk assets like stocks and oil, reducing the need for safe-havens.

Buy The Rumor, Sell The Fact

But markets, as always, buy the rumor and sell the fact.

Coronavirus infections, hospitalizations and deaths are still exploding in the United States and there could still be glitches in the final stage of potential vaccine approvals as well as the distribution. Therefore, the outlook for both gold and oil were being reexamined Monday to reassess their potential and impact from the vaccine trials.

Goldman said in the short-term, the oil market faced spreading lockdowns with demand declining in Europe and the range of infections likely asymmetric to the upside through the winter. It added:

“We expect this winter wave to generate a 3 million barrels per day hit to global oil demand, only partially offset by heating, emerging markets and restocking demand, although this demand hit has so far been masked by strong Asian crude buying and restocking.”

“We expect these muddied short-term fundamental signals and the opposite pulls of lockdowns vs. vaccines to keep oil prices volatile in coming weeks. These cross-currents will further complicate OPEC+’ decision this week to delay or implement its scheduled 1.9 mb/d January production increase.”

A lack of extension representing $5/bbl downside from current spot levels on our modeling further contributed to short-term price gyrations, it said.

“Ultimately, these winter headwinds are just speed bumps on the path to a tightening oil market, with the winter COVID wave delaying but not derailing the oil market rebalancing, with normalized OECD stocks, OPEC+ spare capacity returning to 1Q20 levels and finally needed shale production growth all occurring by 4Q21.”

“This leads us to reiterate our recommendations to be long Dec. 21 Brent forwards, our preferred expression of oil’s 2021 rally, as well as for producers to wait to hedge.”

3 Reasons The Price Of Platinum Is ...