In this column a week ago, we cautioned of and prices having reached inflection points, following a tumble in the and the aftermath of the Arctic blitz that hit Texas’ oil and gas production, respectively. 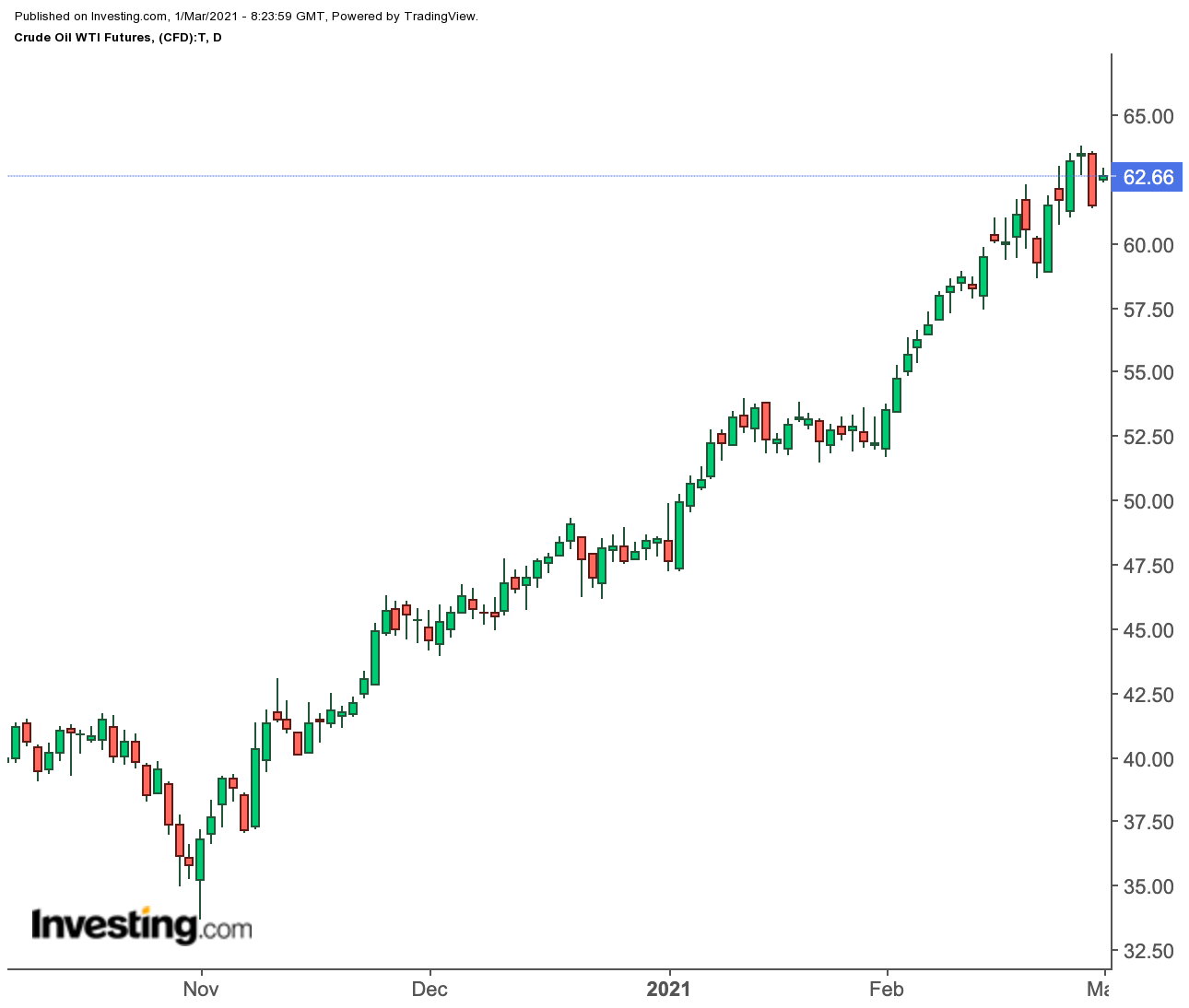 Both those events have passed and in their place are new risks that almost qualify this as an Inflection Point Caution 2.0.

Highly-charged trade volumes—and possible swings in direction—are on track again this week in the leading precious metals and energy markets.

This comes as Federal Reserve Chairman Jerome Powell prepares to speak on the economy, the Labor Department clears the release of and OPEC+ oil producing alliance holds that could be consequential for oil prices. 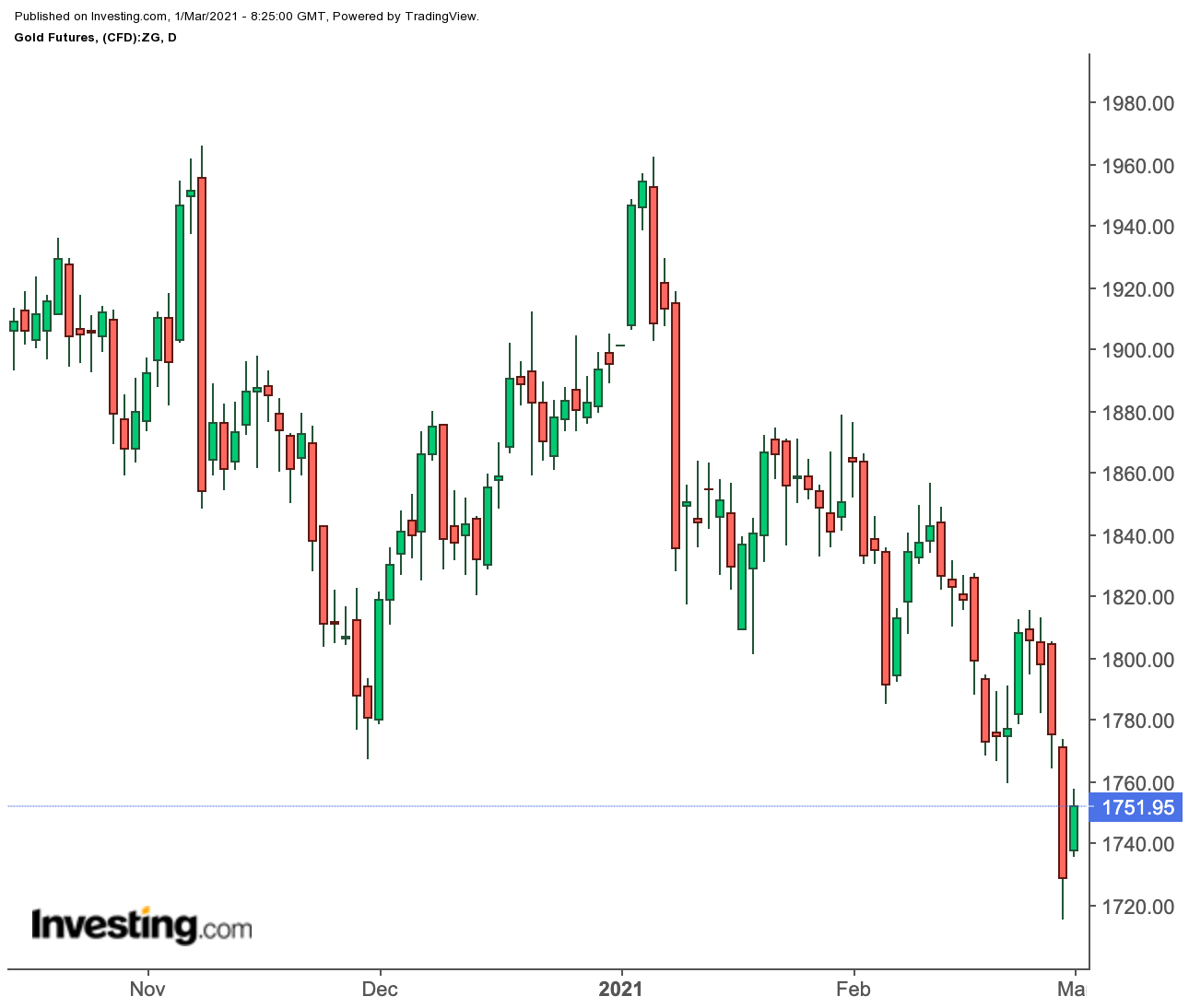 In gold’s case, Powell’s speech at an online event hosted by the Wall Street Journal on Thursday, as well as the jobs numbers, set for release on Friday, will be key. Powell will be attempting to reassure markets that the Fed has inflation under control—whatever investors make of that. As for the February employment number, the expectation is for a growth of 165,000 jobs, above January’s 49,000 expansion.

The two events come as gold longs attempt to seek a higher berth of support in the mid-$1,700 an ounce level—possibly even try to breach $1,800—from what’s widely perceived as oversold conditions triggered by last week’s spike in US .

To ditch the fancy talk and explain it as it is, the gold trade is caught in a web of confusion now.

The web is spun by Wall Street banks using a load of gobbledygook to try and redefine inflation to explain away why an asset that for decades has been promoted as the No. 1 protection against dollar debasement was getting bashed week after week even as the United States embarks on printing trillions and trillions of dollars to fight the coronavirus.

The theory doing the rounds last week was that the current inflation is a cost/push inflation—not the economy destroying “sticky” type of inflation—according to Jeffrey Halley, the Sydney-based Asia-Pacific head for online brokerage OANDA.

In this sort of environment, price rises drop out of Consumer Price Index measures after one year and reflect economic expansion, while the more dire wage/price spiral inflation remains absent, Halley, said, trying to break down the redefined Wall Street version.

Becoming “myopically fixated” on inflation of this type, investors were counting on an explosion in demand as vaccines reopened developed economies, said Halley. He adds:

“The fact is, data has shown we have seen an increase in demand anyway up till now, despite the pandemic walls erected globally.”

But one can also argue that those who shorted gold lately were myopic in a different way—to some of the data that have been released.

Take, for instance, last week’s plunge in gold which began after showed US weekly jobless claims fell 13% to three-month lows. There were two important backstories to the slash in the claims that the market paid little heed to: snowstorms that potentially disrupted filings, and investigations over fraud claims in the state of Ohio.

If the following week’s numbers are adjusted for these two events, non-filings from the storms could turn out to be higher than the fraud in Ohio. Gold, in this case, would have been literally shorted by those with a short-sighted view of the economy.

Thus far, the Fed has shown little anxiety in trying to calm galloping Treasury yields. Powell last week that monetary policy will remain easy for some time to come.

The rebound could go above $1,800—or break midway of the week to reseek $1,700 territory, or even lower—said Sunil Kumar Dixit of SK Dixit Charting in Kolkata, India.

The flip side could be as dangerous, says Dixit, adding:

With the dollar on the backfoot on Monday but markets still awaiting the Senate test next to President Joseph Biden’s $1.9 trillion COVID-19 relief plan after it passed the first stage of Congress—the House of Representatives—last week, gold remains in an inflection point.

Oil Faces OPEC Test It Is Likely To Pass

Crude oil markets are, meanwhile, in a precarious position of their own, after posting a fourth straight month of gains in February.

At current prices, WTI is also trading at levels last seen in January 2020, before the onset of the coronavirus pandemic that decimated the market for months.

The enlarged OPEC+ alliance of oil producers, banding the Saudi-led Organization of Petroleum Exporting Countries and allies steered by Russia, is to meet Thursday to set output quotas for April. The previous meeting had ended in a face-saving compromise which allowed Russia and Kazakhstan to raise their output, while Saudi Arabia offset the net increase in world supply with a temporary 1 million barrel a day cut of its own.

The kingdom pledged to make these extra curbs only in February and March, but some see signs that could change as the negotiations get underway.

Bloomberg reported earlier this week that Riyadh was publicly urging fellow members to be “extremely cautious,” despite crude prices rebounding to a one-year high. In private, the kingdom has signaled it would prefer that the group broadly holds output steady, delegates said. Moscow, on the other hand, is indicating that it still wants to proceed with a supply increase.

But some analysts, like GasBuddy’s Patrick de Haan, are optimistic that crude prices will weather the OPEC meeting just fine:

“To stop and potentially reverse slightly the meteoric rise in oil, I’d expect a multi-million barrel increase may be needed to push oil back to $50. With recovering demand, feels like the market probably could use 2+ (million b/d) increase.”

“Anything under 1 is too low and risks oil breakout.”

Disclaimer: Barani Krishnan uses a range of views outside his own to bring diversity to his analysis of any market. As an analyst for Investing.com he presents divergent views and market variables. He does not hold a position in the commodities and securities he writes about.