The White House’s progress on the stimulus front will likely decide the path for most commodity prices this week, including . But ‘s ability to hit new highs may be determined more by how it copes with its achilles heel, the coronavirus, and a new emerging problem: Iran.

The first week of the Biden administration brought mixed fortunes for markets. Prospect of new COVID-19 relief in the trillions of dollars sent on Wall Street flying to record highs. But the potential inflationary impact and dollar debasement from all that only helped gold gain modestly. More interestingly, crude prices barely fell despite new lockdowns in China and a huge uptick in weekly U.S. inventories.

As the White House aggressively pushes its $1.9 trillion stimulus package in Congress this week — Deputy Press Secretary Karine Jean-Pierre has already remarked the bill has such urgency that “we can’t wait” for it to pass — all eyes will be on how quickly the legislation sails through the House of Representatives to reach debate in the more important Senate.

Will Biden’s Stimulus Pass The Senate?

What happens from there is really key because of the speculation that the administration may have trouble getting such a large relief package through the Senate without adequate bipartisan support. The Senate’s current makeup only gives Democrats aligned with President Biden a majority of one and that too, via a tie-breaking vote cast by Vice President Kamala Harris.

The compromise for the administration, therefore, might be to try and pass a string of mid-sized relief bills, rather than chunky trillion-dollar instalments. That could mean a slower climb for gold prices rather than a runaway rally returning to record highs above $2,000 an ounce that many anticipated a couple of months back. 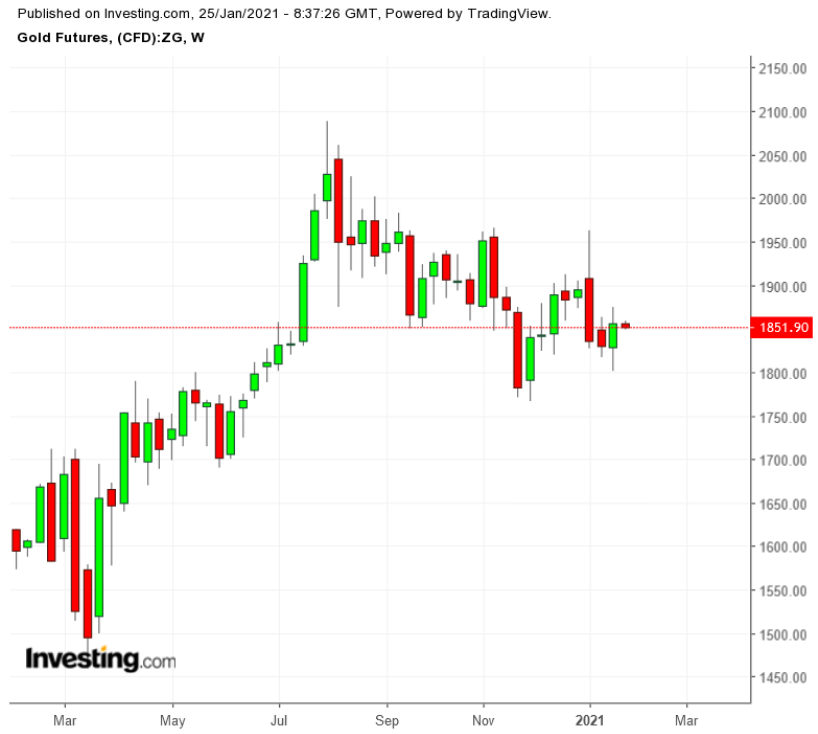 At a glance, in Monday’s Asian session, gold seemed to reflect some of those concerns, with the benchmark February contract on New York’s Comex declining as much as $6 an ounce to hover around $1,850.

But a closer cross-examination of the markets showed little rationale for gold’s decline, with the rival losing Friday’s brief respite to head lower for a fifth time in six sessions. Yields from the benchmark were also flat. But — which lost a chunk last week after a manic record high run to $40,000 — seemed to have made a comeback, currying favor with institutions at the expense of gold, as asinine as the whole idea sounded.

Jeffrey Halley, head of research for Asia Pacific at OANDA, said February gold had resistance at $1,875 but was more likely to test support at $1,837.50. He added:

“Gold continues to flirt with its 200-Day Moving Average at $1846. A daily close below the 200-DMA likely signals another wash-out of speculative longs down to the $1800 an ounce region.”

Another development likely to impact gold this week will be the Federal Reserve’s monthly rate decision, followed by Fed Chair Jay Powell’s news conference, on Wednesday. No change is expected to rates that have stood at near-zero for almost a year now due to the pandemic. But Powell’s words will be examined for even the slightest indication of when recovery is expected to set in, and, along with that, a tapering of stimulus measures.

Over the past fortnight, the Fed chief and his retinue of central bankers have all but yelled from the tree-tops that tapering isn’t happening anytime soon. But bond traders remain deaf, pushing yields higher on misguided hopes, with gold bears in complicit, finding the excuse to hammer the yellow metal. Despite last week’s 1.4% rebound, remain 2.4% down for January from combined losses in the first two weeks of the month.

On the oil front, crude prices were picking up again after taking on Friday their sharpest one-day fall in a week, following a ramp up in U.S. . The Energy Information Administration reported a build of 4.35 million barrels for the week ended Jan. 15, the first stockpile increase for U.S. crude since the week to Dec. 7. 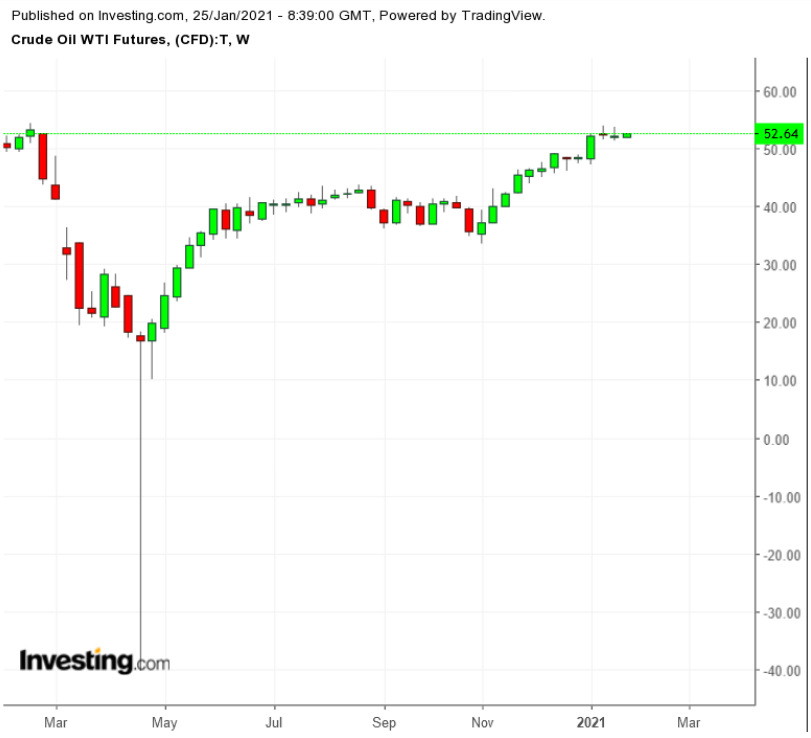 The rebound in oil came despite big buyer China reporting a climb in new COVID-19 cases on Monday, casting a pall over demand prospects in the world’s largest energy consumer, the main pillar of strength for global oil consumption.

China has also ramped up lockdowns after more than 10 months of keeping the pandemic under relative control.

Another thing the oil market had to beware of: production ramp-ups by Iran, now that Trump-era sanctions are not expected to be enforced rigidly anymore by the Biden administration on the Islamic Republic.

Iran’s Deputy Oil Minister Amir Hossein Zamaninia on Friday said the Islamic Republic has started ramping up its oil production and expects to reach pre-sanctions levels in one to two months. Iran shipped as much as 4.0 million barrels per day before the clampdown.

Iran’s Oil Minister Bijan Zanganeh told state-owned news agency SHANA also on Friday that Tehran’s crude exports had recently risen “significantly,” despite tough sanctions imposed since 2018. He did not divulge numbers but went as far to say that Iran “set the highest record of exports of refined products in the history of the oil industry during the embargo period.”

Should there be a resumption of talks between the United States and Iran on a nuclear accord — that could see Washington officially lifting its sanctions on Tehran — oil prices could easily lose between $3 and $5 per barrel, analysts said.

What’s holding crude up for now are new production cuts of one million bpd announced by Saudi Arabia last month for February and March, and hopes of a demand revival by the summer from COVID-19 vaccinations.