A raft of inflation data and a host of speeches by Federal Reserve officials, along with the dollar’s reaction to those, will determine if gets to progress more deeply into $1,800 territory this week or even stay there. 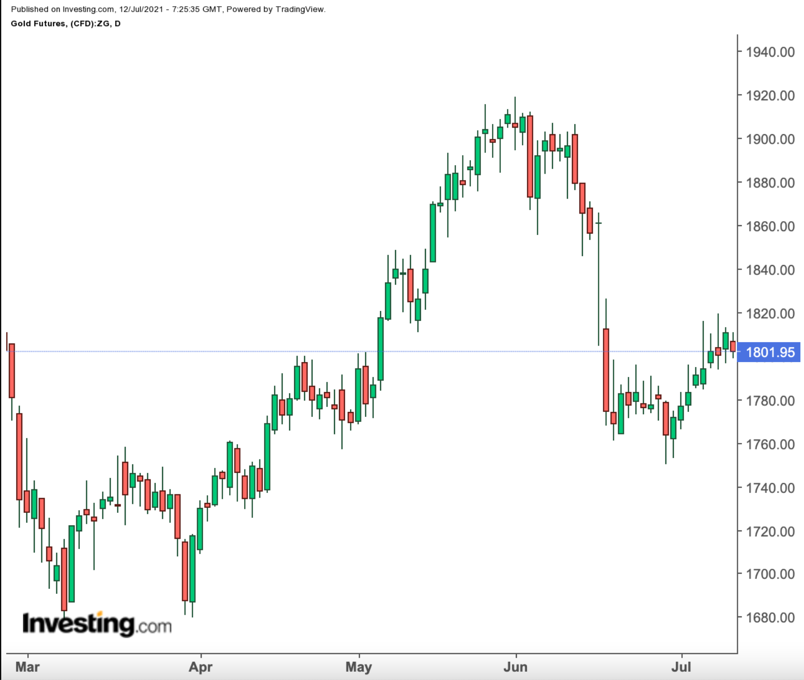 For , the outcome will again be decided by weekly US consumption data. Another sizable , with complementing , reported by the Energy Information Administration can keep prices chugging at around $75 highs. 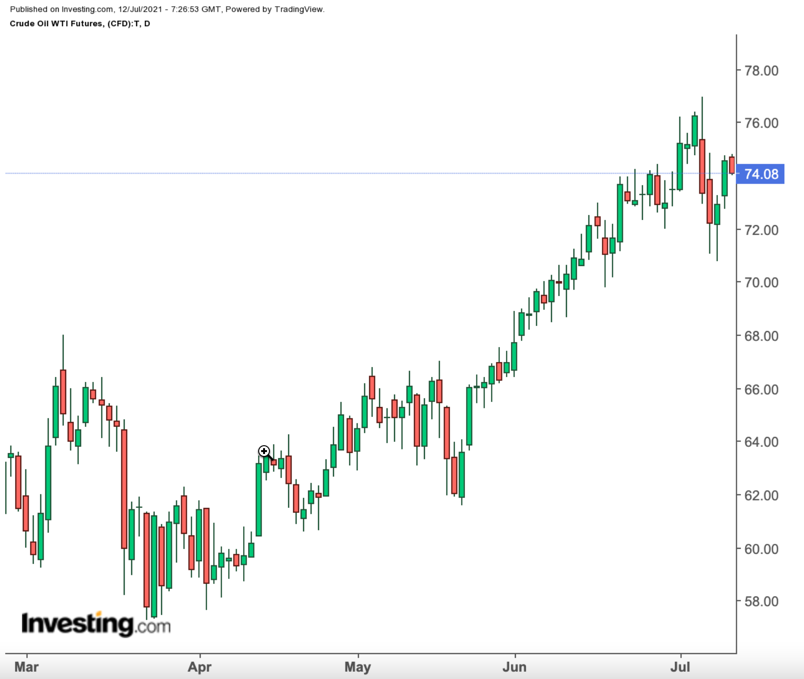 Otherwise, fears of dysfunction within OPEC—after its failure last week to agree on new output levels for August, resulting in a fight between one-time allies Saudi Arabia and UAE—can continue chipping away at oil’s three-month old rally. The spread of the Delta variant of COVID-19 and low levels of vaccination in some countries could also weigh on crude prices.

Gold was trading about half percent down in Monday’s afternoon session in Asia.

The yellow metal posted a third straight weekly gain on Friday, returning to crucial $1,800 support. But it struggled to hold that ground on Monday. Gold’s outlook was also muddy, with no certainty on how long it will take for the much-touted US inflation to accelerate its gains.

In what appears to be a week skewed to inflation, readings for the US , and the University of Michigan’s will be issued on Tuesday, Wednesday and Friday, respectively.

In terms of other data, aside from the staple , there will also be and .

Haresh Menghani, who blogs on gold technicals, said in a post on ForexLive:

“Dips below the $1,800 mark might continue to find some support near the $1,795-93 horizontal support, which should act as a key pivotal point for intraday traders. A convincing break below might prompt some technical selling and accelerate the slide further towards the $1,780-78 support zone. Some follow-through selling below the $1,775 level will negate any near-term positive bias and turn the commodity vulnerable.”

“On the flip side, the $1,815-18 region now seems to have emerged as immediate resistance. This is followed by the very important 200-day Simple Moving Average, around the $1,828-29 zone. A sustained strength beyond will be seen as a fresh trigger for bullish traders and set the stage for an extension of the recent positive momentum witnessed over the past three weeks or so. (That could) surpass an intermediate barrier around the $1,852-55 region and test the next major hurdle near the $1,870 level.”

On the Fed side, Chairman Jerome Powell’s semi-annual congressional testimony on Wednesday and Thursday will play a key role in determining the next leg of a directional move for the .

The dollar was up on Monday morning in Asia. Risk currencies remained above their recent lows against both the US currency and the as investor fears of a slowdown in the global economic recovery from COVID-19 calmed down for now.

On the oil front, US crude’s WTI, or West Texas Intermediate, benchmark traded below $74.40 a barrel. London’s hovered at under $75.40.

WTI ended last week with a modest 0.6% drop while Brent lost 0.8% on the back of OPEC concerns.

TD Securities said in a note:

“A material rally or decline is unlikely until the market hears details on how the OPEC+ group settles the request from the UAE to increase its production base. If the producer group limits monthly supply increases to the previously discussed 400,000 barrels per day per month through December, we project that WTI may well challenge $80 per barrel some time during Q3-2021, despite COVID-19 Delta variant risks.”

An end to Iranian sanctions may or may not have a material negative impact on oil, depending on OPEC’s reaction, TD Securities said, adding: “If no OPEC+ plus deal is made and all members produce to capacity, there will be a very large surplus and prices may see very sharp declines.”

Finance ministers from the Group of 20 countries, meanwhile, said at their meeting on Saturday that Delta outbreaks could force new restrictions on society and business.

That, in turn, casts a shadow over the fuel demand outlook outside the United States, especially Asia and Australia.