So, did markets get their knickers in a knot for nothing?

News that Donald Trump could be released in record time for a hospitalized COVID-19 patient, perhaps as early as Monday , has got risk assets all pumped up and looking to significantly retrace Friday’s losses—making investors wonder if it was worth the pre-weekend stress they endured for a president known to thrive on optics.

“Despite the and PMI reports, the focus will remain on Trump’s health updates and the resultant impact on the global markets,” FX Street said in a blog, after video messages from the president were posted on Twitter over the weekend, where he said he was reasonably well and also showed he’d left the Walter Reed National Medical Center on Sunday to wave at supporters from his limousine.

Citigroup’s chief forex strategist in Japan, Osamu Takashima, said the president’s coronavirus infection may have reduced the chance of a contested outcome in the Nov. 3 election—and also the risk of a constitutional crisis in the event Trump’s challenger Joe Biden won.

“Recent public opinion polls (are) indicating that Biden’s support ratings are still above Trump—with a wide enough margin for a probable victory—and that isn’t necessarily a bad thing.”

The Citi forex chief for Japan said Biden was seen “as a pragmatist and that his policies may not necessarily be negative for markets.”

Politico, meanwhile, reported that Vice President Mike Pence will travel to Utah on Monday as he plays the Trump campaign’s lead act for the foreseeable future—the highest-profile surrogate for the president’s re-election at a time when both men can least afford another setback following Trump’s COVID-19 diagnosis.

On the commodities front, as the Asian window for gold trading waded past early afternoon Monday in Singapore, both and of the yellow metal tumbled under the key $1,900-an-ounce level it held on Friday. 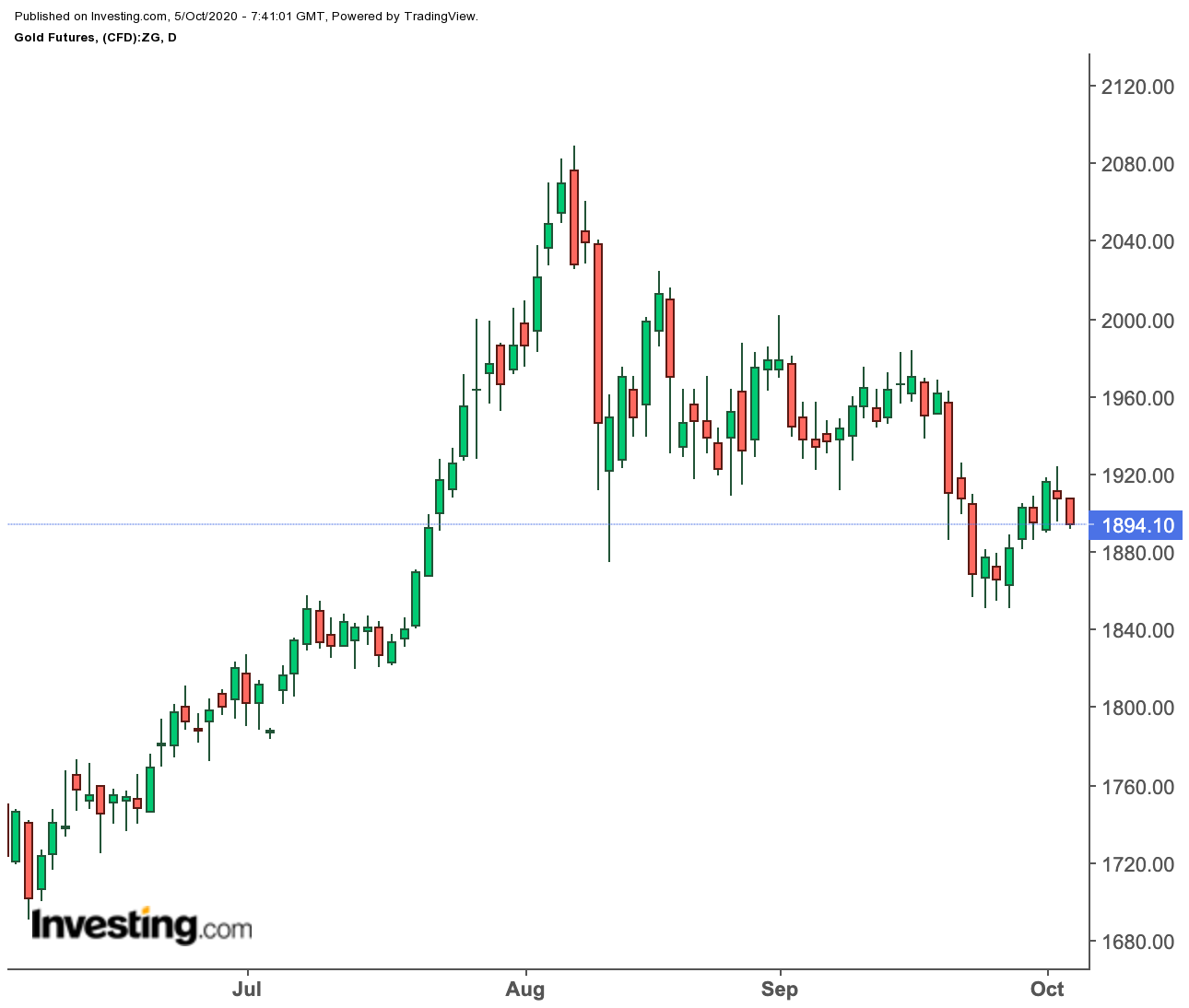 Gold, as a haven, has become sort of a joke since the metal came off its summer record highs of over $2,000. When news broke that Trump had tested positive for the coronavirus, gold didn’t rally but the dollar did.

The , if one needs to be reminded, is a currency that sits at the heart of a gaping U.S. fiscal deficit due to pandemic-related relief spending, record recession, thousands of business closures, historic unemployment and other economic ills. 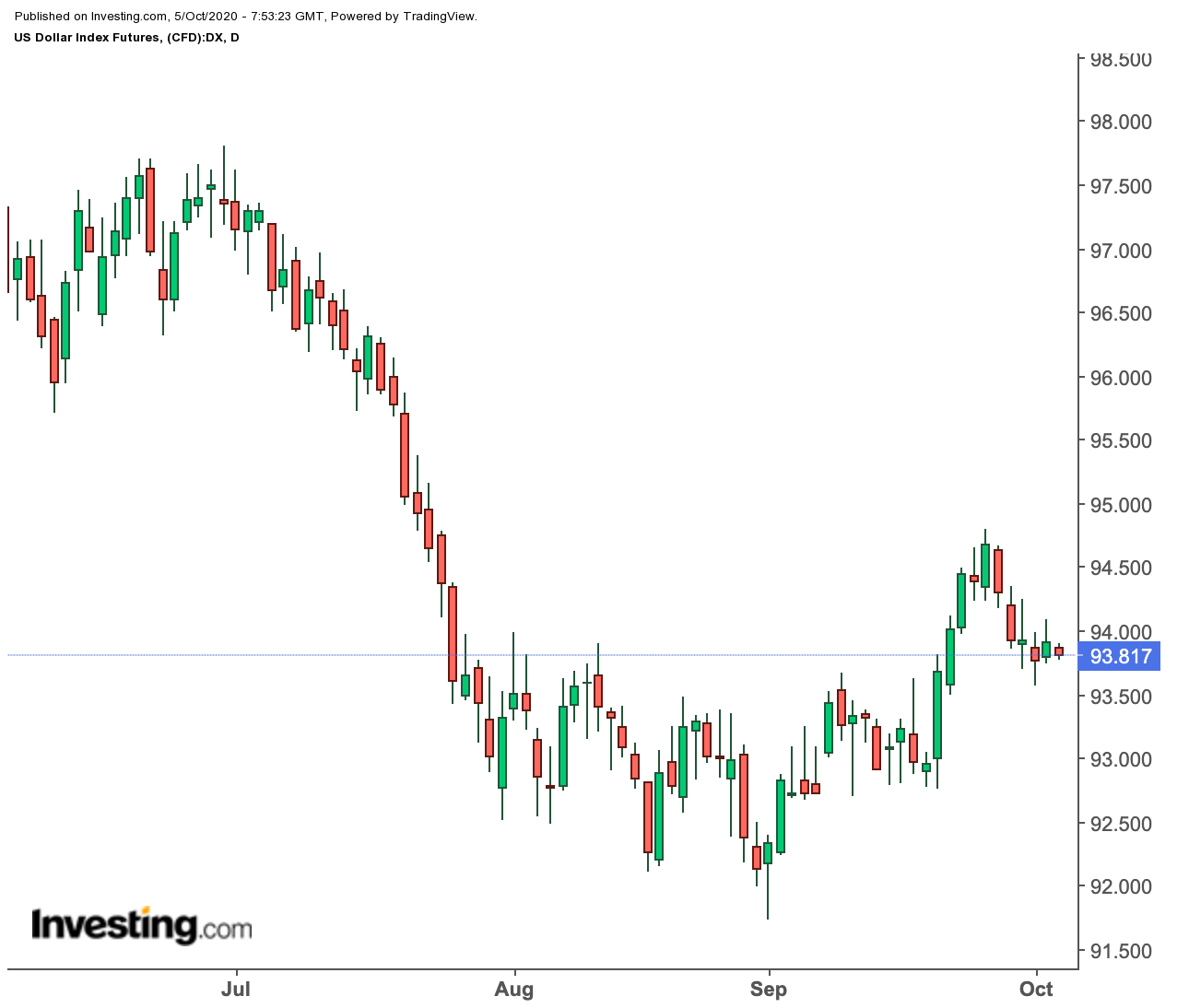 The Dollar Index, which pits the greenback against a basket of six currencies, was barely lower in Asian trading Monday, performing better than gold. There was a time when missiles fired over the Middle East or tested by North Korea could easily get gold up by $20 an ounce. Not now.

The only reason the dollar was even in the red is because of the off-chance that a new COVID-19 stimulus bill could be agreed upon in Congress this week. This stimulus is super-important—not just to help millions of unemployed Americans but also to get markets, including gold, rallying again.

The Federal Reserve’s quantitative easing, which began in the aftermath of the 2008/09 financial crisis has largely changed the attitude of gold investors. With QE, there’s easy—or lazy—money to be made. Without it, investors of all stripes don’t seem interested, including those with a stake in gold.

Thus, even news of Trump’s COVID-19 infection last week went by as just another event for gold—which is supposed to be an asset for hedging against political and financial risks.

The need for a stimulus was emphasized on Saturday by a tweet from Trump’s @realDonaldTrump handle that read:

“OUR GREAT USA WANTS & NEEDS STIMULUS. WORK TOGETHER AND GET IT DONE. Thank you!”

Fed Chairman Jerome Powell is to make a to the National Association of Business Economists on Tuesday where he is expected to reiterate the need for additional fiscal stimulus to underpin the slowing economic recovery.

The Fed is also due to to the September FOMC meeting on Wednesday, which are expected to underline the message that there is little prospect of an interest rate hike in the next couple of years.

In oil markets, crude prices bounced the first time since Wednesday, rising more than 2% in concert with the improving risk sentiment. 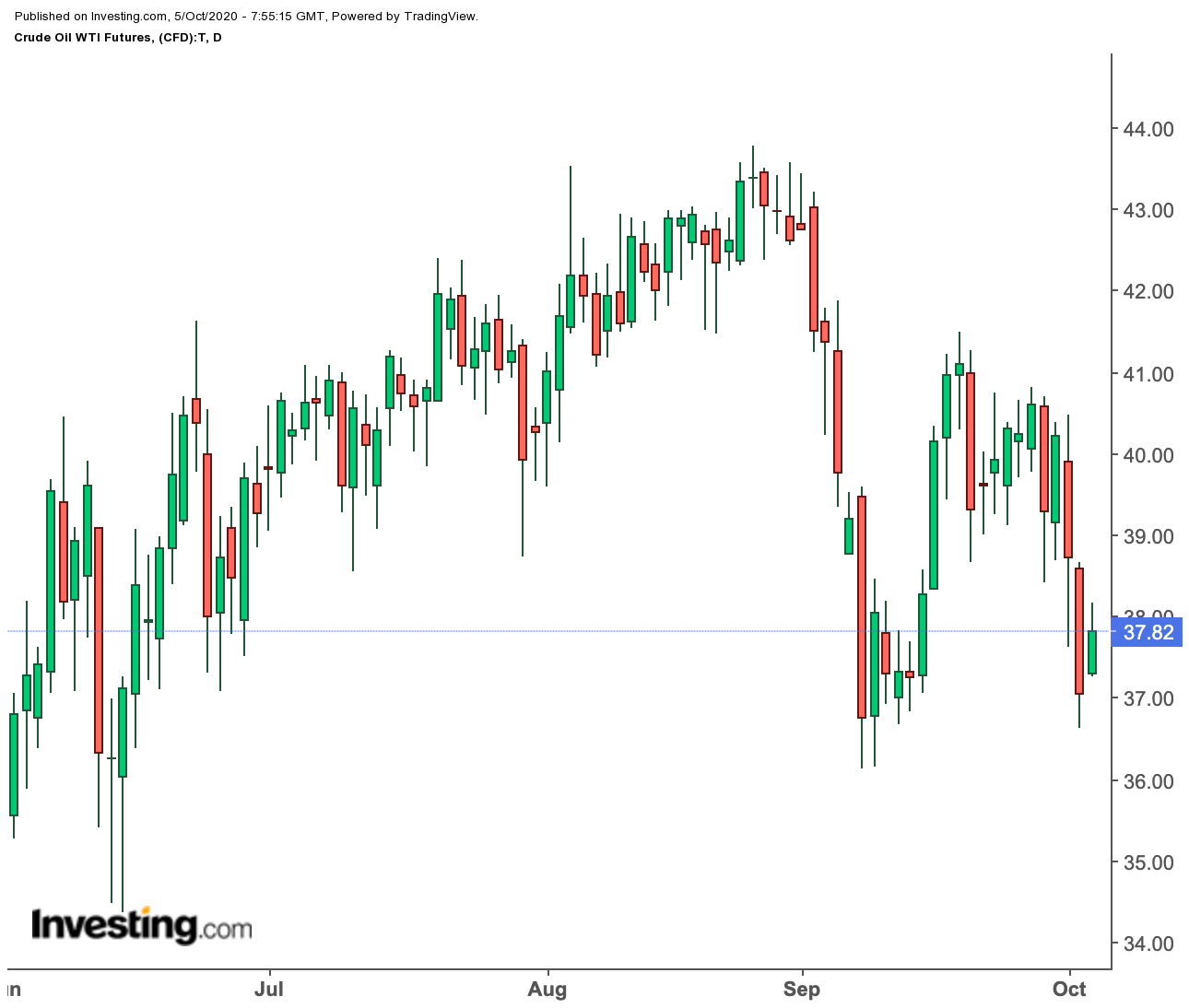 The Ironic, Tragic Plight Of Platinum