Buy the fact, sell the rumor: that’s the likely course for oil as in an output pact achieved by major producers leads to a rebound, before underwhelming production cuts from the deal and speculation of storage tanks hitting capacity trigger a new selloff. 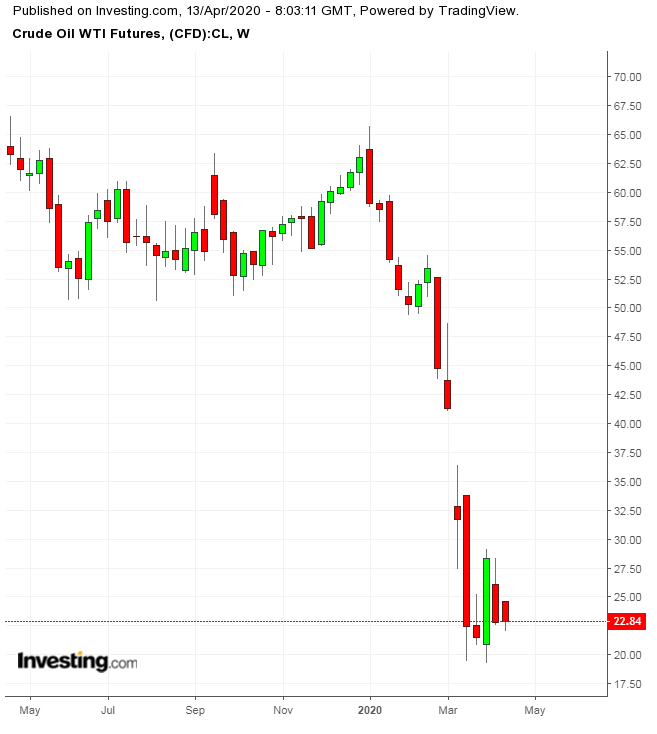 , the U.S. benchmark for crude, was up 5% by early afternoon in Asia while London-traded , the global benchmark rose about 4%. It was just the kind of turnaround that Saudi Crown Prince Mohammad bin Salman and Russian President Vladimir Putin, along with their new, unexpected ally — U.S. President Donald Trump — had been hoping would occur. Had there not been a deal, the outcome might have been disastrous, taking prices without a blip into the teens.

Yet, despite their mood for self-congratulation — especially Trump who tweeted that it was a “great deal for all” after the end of a four-day marathon session of video conferences he stayed on top of — the path of least resistance for oil is lower as the cuts pledged remained below a third of demand estimated lost to the COVID-19.

Worse, global oil storage tanks could run out of space in the coming weeks as more production, albeit reduced, hits a market where consumption remains anemic at best while inventories continue to climb.

“The number of holes in this production cut deal will make it hard for anyone to feel confident that a firm bottom is in place.”

Under the deal, which was hastily released on Sunday afternoon in New York — just hours before the open of Tokyo markets — the Saudi-led OPEC+, which includes Russia, announced it is to cut 9.7 million barrels a day, just below the initially-proposed 10 million bpd.

The United States, Brazil and Canada — countries that never before had collaboration with OPEC in its 60 years — will contribute another 3.7 million barrels on paper as their production declines.

Mexico, the country that infamously held up the deal for more than 72 hours — balking first at the 400,000 bpd cut demanded by OPEC+; then agreeing to a 100,000-bpd trim with the U.S. providing the balance 250,000-300,000 bpd; before disagreeing again to any reductions — remained out of the deal. That demonstrated the Saudis’ inability to call the shots anymore in the global market for oil, even as Riyadh’s Energy Minister Abdulaziz bin Salman proudly declared to Bloomberg that “OPEC+ is up and alive” and that he was “more than happy with the deal.” 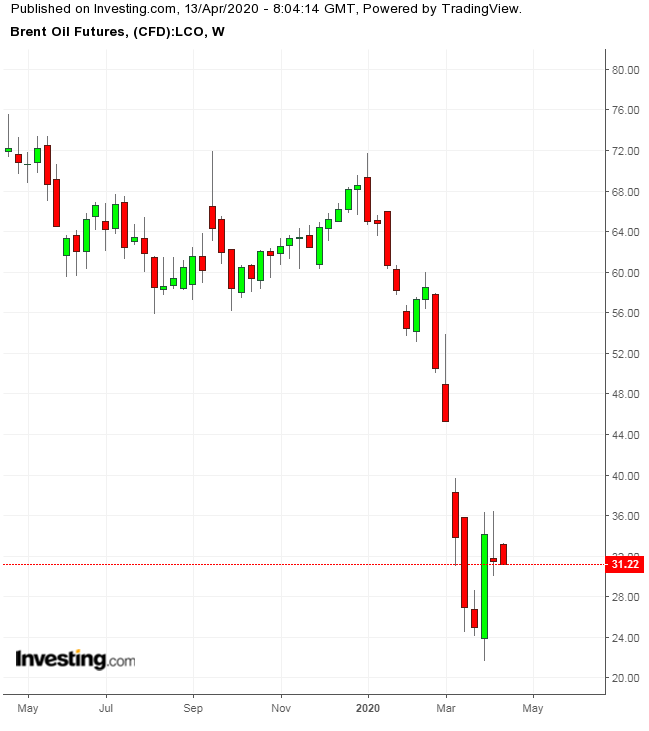 “Benchmark Brent at the low $30s cannot be supported as a bigger contango is required to pay for storage that will soon be needed.”

Contango refers to a situation in commodities where the front-month contract in a particular market trades at a discount to further months for delivery.

In Brent’s case, for June settled on Friday at a discount of nearly $9 a barrel to the contract scheduled for delivery in a year’s time. Such a market dynamic allows traders to buy crude immediately, put it in storage somewhere, and try to gain by selling it forward. While that may be lucrative for the individual, the oil sitting in storage shows up as part of global inventories, further depressing the spot price.

“Even if in some perfect world we see full OPEC++ compliance and 10 million bpd in cuts, this still leaves an incredible minimum 10 million bpd supply overhang for 2Q20,” said Dickson. He also cited the chasm between pledged cuts and what’s actually delivered to the market.

“We find it very unlikely that the full 10 million bpd cut will be implemented as May 1 is just three weeks away and cuts of that size take time to realize. The oil machine is not as flexible as just simply turning off the tap or pressing a button,” he said.

“There is about 700 million barrels of crude storage left, at land and sea, so only 30 days left if no prompt cuts take place. With 10 million bpd cuts, we will hit the wall 2 weeks later. So to get through May we need at least 5 million bpd mote cuts quickly, and all producers should now contribute their fair share.”

New York-based consultancy Energy Intelligence makes the same point. It said the market was immediately focused on the remainder of April — the messiest month of oil balances, thus far — and what to do with upcoming barrels in May.

“March ran a staggering 14 million barrels per day surplus and April’s will be similar as shut-ins help offset some demand loss,” Energy Intelligence said.  “A production cut would only start to clean up the balances on paper starting in May, while the physical oil market would remain swamped until June.”

Moya of OANDA concurred, saying the demand outlook for now remained bleak, although the cuts agreed at the weekend could support an implied stock draw in the second half of the year.

“Oil prices should remain heavy in the short-term, but that could quickly change if optimism grows that the US and Europe could see major parts of their economy opening by June,” he said.

“There will be a time to eventually turn bullish on oil, but for now WTI crude prices could continue to show signs of stabilizing in the mid-$20s.”

As for , the trajectory for $1,800 per ounce seems in place, though the path may be fraught with volatility by investors looking to cash out quickly if stocks come under fresh pressure next week from a tumble in crude prices. 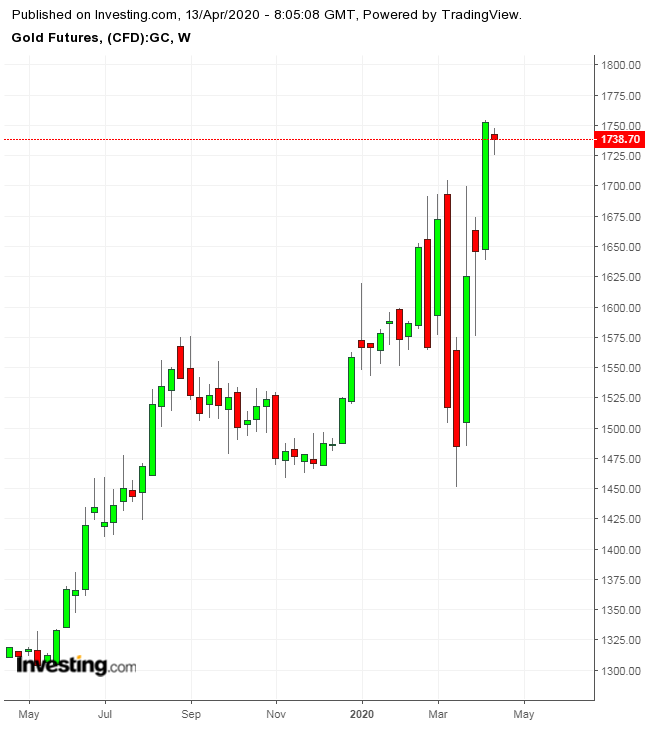 Fundamentally, markets are flooded with cash from central banks around the world which is inflating gold prices at this highly uncertain time.

The Federal Reserve announced a $2.3 trillion effort to bolster local governments and small and mid-sized businesses on Friday, the latest in an expanding suite of programs meant to keep the U.S. economy intact as the country battles the coronavirus pandemic.

The test will come for gold if we see the stock market turn down again, given that the yellow metal has been quite closely correlated with equities lately, while the remains a safe haven of choice.